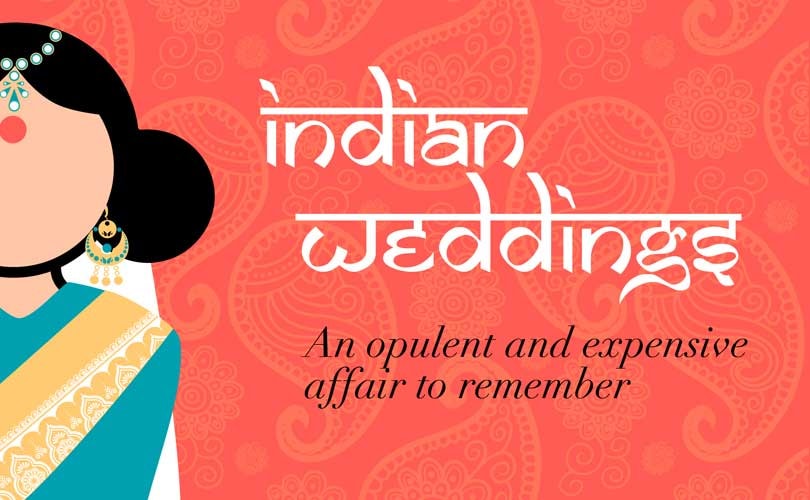 Indian weddings: An opulent and expensive affair to remember

Touted to be a business worth 40 billion dollars (around Rs 2.5 lakh crores) growing at an explosive rate of 25-30 percent every year, weddings in India have undergone a sea change in terms of planning, rituals as well as fashion and budgets. While they have moved away from being just intimate family affairs adopting a more modern look, the bright shades of reds, music, heavy jewellery and bling attached to it continue to rule.

With the craze of destination weddings on the rise, Indians have now begun splurging on trips to exotic locales along with friends and families to make it a two in one – wedding + holidays affair. No wonder, the industries related to the weddings such as fashion, beauty and fitness and photography too are benefiting from this rising trend.

No time to read the whole article? Click here for the 10-second version. For more reads on bridal wear, click here. 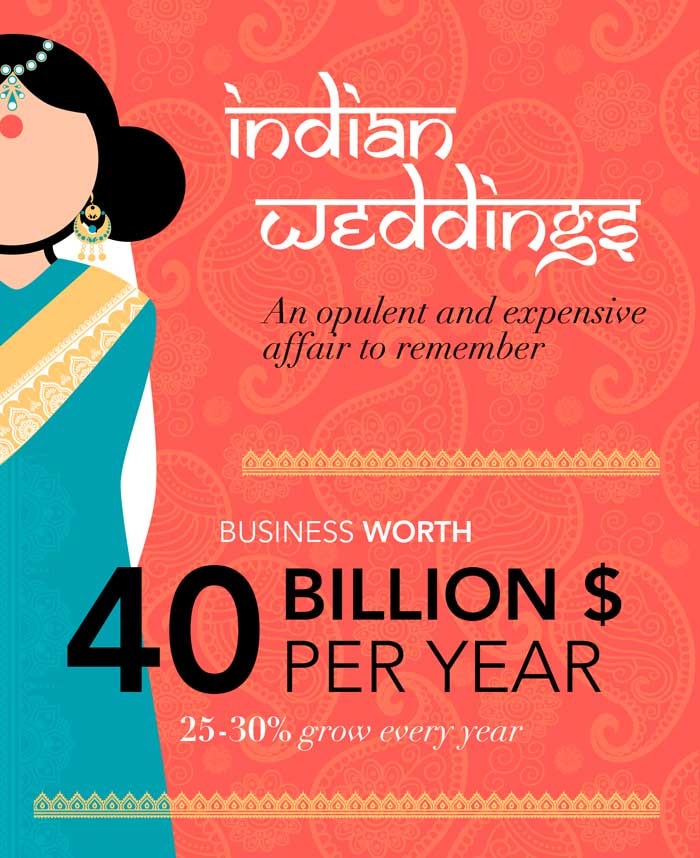 Changing landscape of the India weddings

As per the industry estimates in the top 15 Indian cities including Jaipur, Udaipur, Delhi, Mumbai, Hyderabad, Kolkata, Chennai and states such as Goa and Kerla, people usually spend between two million rupees (30,000 dollars) to 20 million rupees (300,000 dollars) for three to five days of elaborate celebrations, starting with mehendi , sangeet , haldi , barat and feras to bidai . According to a research paper released in June 2015 by Reetika Madaan, Assistant Professor, Dept of Management, Ludhiana Group of Colleges, almost 10,000,000 weddings take place in the country every year, which is equal to 900,000 in a month and around 30,000 marriages per day.

According to a book — “The Big Indian Wedding: The Ultimate Guide For Dummies” authored by Sakshi Salve — “The last 30 years have seen astounding advancement in the Indian wedding industry. From home to hotel, roses to cruises, ‘chai’ to champagne and from big ‘dil’ to big bill — Indians have pretty much reinvented the entire wedding landscape.”

Salve says that the multi-day extravaganzas are complete with pyrotechnics, performances by Bollywood actors, international music stars and thousands of invited guests. “There is no doubt that Indian weddings are by far the most lavish, decadent and fun. No other country in the world can boast of their weddings the way Indians do,” the book says. Further talking about the vastness of the industry, Salve writes that Indian weddings are all about…making a huge contribution towards the economy. There are a gazillion people who run their homes thanks to this booming industry — caterers, bootleggers, ‘tentwaalas’ , ‘lightwaalas’ , ‘soundwaalas’ , DJs, ‘phoolwaalas’ , ‘mehndiwaalis’ , beauticians, fashion designers and jewelers would all be out of business if there were no big fat Indian weddings, adds the author.

Keeping the high prospects of the Indian wedding market in sight, global players are gradually setting their eyes on the industry, while domestically the country has witnessed a sudden rise in bridal fashion weeks and couture weeks. Out of these - India Bridal Fashion Week launched in Mumbai in 2010 and Couture Fashion Week held in New Delhi by the Fashion Design Council of India (FDCI), are two most prominent shows among others. 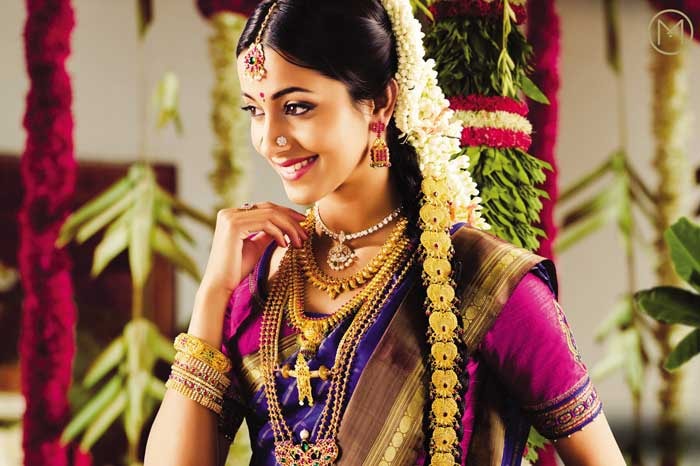 As per the survey recently conducted by The Knot, the average cost of an Indian wedding in the US is 65,000 dollars, while a high-end one, according to a Fortune survey could go up to 200,000 dollars. Asian weddings in the UK top 50,000 pounds, a UK Alliance of Wedding Planners study reveals. Industry experts suggest that along with gold jewellery, the clothing budget for a high-end Indian wedding almost crosses 375,500 dollars, since along with the groom and bride even their families are part of the events and rituals that span over five to six days. So an exclusive, heavily embroidered bridal lehenga or a sari can put a dent in a pocket of over 110,000 dollars or Rs 75 lakh. No wonder, Indian designers’ almost 80 percent business is driven by the bridal couture.

Though couture weeks in India are different from those in the western countries, Indian versions are primarily focused on the heavy bridal fashion. Fashion weeks are the platforms used by known and new designers as well as sponsoring brands to establish presence and create brand identity in the industry. While heavy embroideries, bright colours and all the glitz and glamour continue to rule the Indian bridal fashion scene, some designers are trying to pave a way out of the clutter to create unique and futuristic designs using new fabrics, design elements and styles in lighter shades. And unlike in the past, groom or men’s fashion too has found a place in such shows.

India seems to be waking up to the term Haute Couture only recently since fashion weeks like the Delhi Couture Week, Amby Valley Indian Bridal Week, Lakme Fashion Week and many others, mostly showcase more of bridal wear. There always has been confusion about the difference between bridal and couture in India. Couture in India means catering to the wedding wear market since this is where designers try to make their highest return on investments, where the garments have to be heavily embellished and priced. 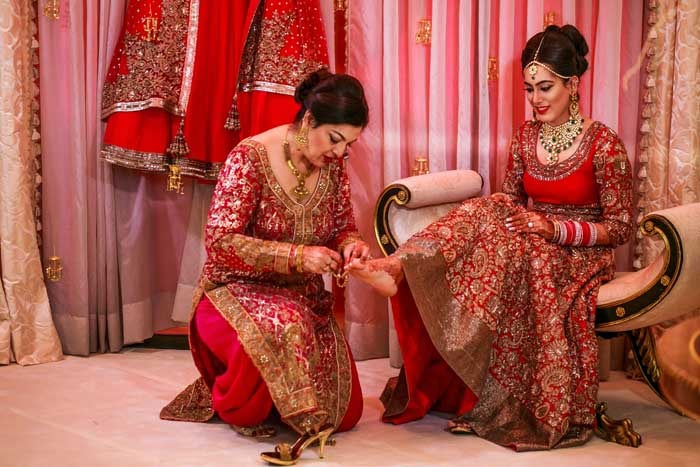 While the difference between couture and bridal is getting evident with designers trying to create a distinction with their designs, one cannot expect a French concept to work in an Indian context. Couture in India is developing its own identity without heavily depending upon opulence and embroidery, creating attires appealing to the modern day bride. The Indian designers are surely trying to give a distinct Indian flavour to haute couture while adapting western sensibilities into their creations.

Earlier dominated by the unorganised players, men’s ethnic wear segment is now witnessing brands penetrating into the industry. Another important change is the keen attention being paid to modern fashion trends in men’s designs by fashion designers as well as brands.

The demand in this category is driven by many brands and designers trying to establish their presence, rising disposable incomes, increasing fashion consciousness, rise in nuclear families and need to look different on different occasions. Also today’s men are willing to experiment and in fact demand variety and unique ensembles to make weddings a memorable affair.

Fashion trends too are witnessing a rapid change. While heavily embellished traditional attires were a preferred choice in the past, they are now being replaced with more lightweight, Indo-western garments having minimal embellishments and embroidery work. 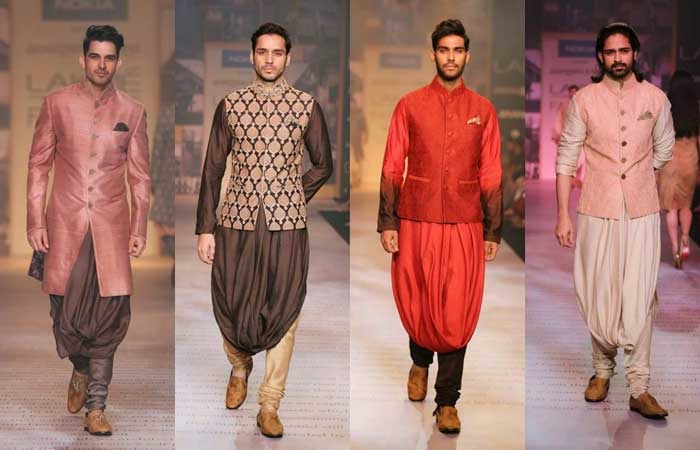 The Technopak report states that ethnic wear market is largely dominated by unorganised players. Each region of the country has strong players but there are very few brands having a national presence across India. About a decade ago, the segment was a completely unorganised with no brand presence with the space mostly occupied by local retailers and tailors.

The demand is also being driven by the advent of ecommerce in India, which has almost compelled even leading designers also offering ethnic or couture collections to turn to the domestic market with affordable lines. Expensive designer ensembles that so far remained a dream wear for shoppers are now up for grabs online. Designer wear by acclaimed designers like Rohit Bal, Raghavendra Rathore to Ritu Kumar is now easily available online, thanks to the aggressive marketing efforts of portals like Jabong, Myntra and Flipkart. Interestingly, clothes by these top fashion designers are now available at affordable prices and the range hovers just anywhere between Rs 3,500 (44 dollars) – Rs 15,000 (over 200 dollars).

In the past, a line dedicated to men on the fashion catwal was so limited that male models on the ramp looked like supporting actors in a woman-centric film. Utmost focus of fashion weeks in India has always been on the women’s wear. But of late, a number of designers have started turning their focus on the men’s segment and this is evident by the fact that renowned designer like Manish Malhotra, who completed 25 years as a costume designer and 10 years of his label, showcased his men’s wear line titled 'The Gentlemen's Club' for the first time at Lakme Fashion Week in Mumbai, last year. 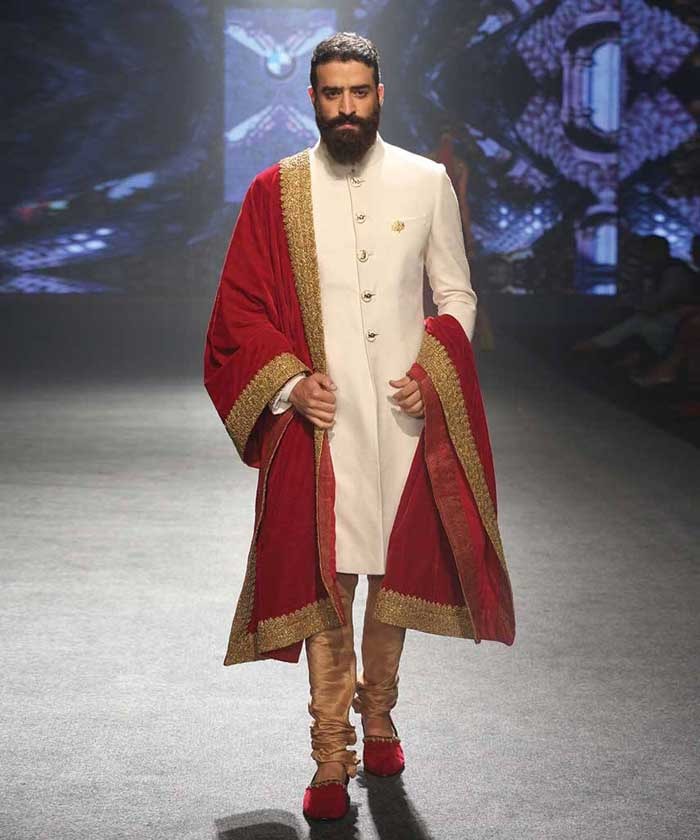 Not only do foreigner visitors prefer Indian palaces such as Umaid Bhavan in Rajasthan for their nuptials but they are also following the glitz and extravagant ceremonies attached to it. On the other hand, the wedding industry has become so huge that even famous international designers are exploring partnership opportunities in the Indian bridal wear market collaborating with Indian brands.

Countries like China are also looking at partnering with Indian travel agencies specialised in destination weddings and honeymoon packages to promote Chinese cities like Lijiang and Dali as holiday and honeymoon destinations for the newlyweds. 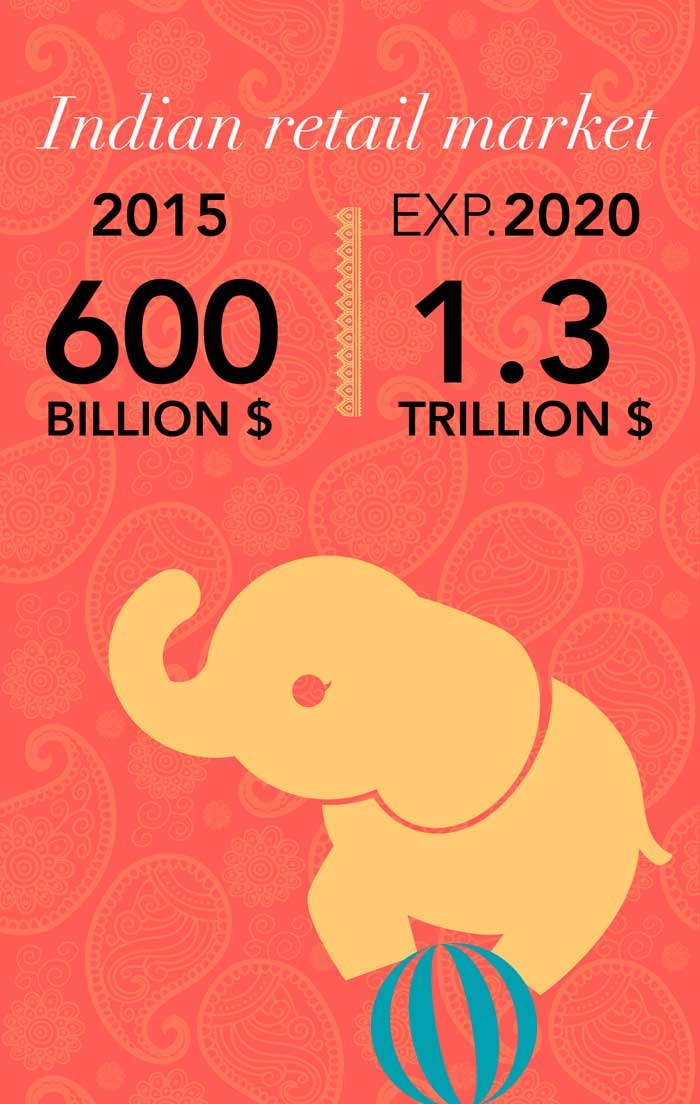 Eyeing growing appetite for luxury goods among Indians, names such as Dior, Gucci and Christian Louboutin are already creating exclusive collections to suit the Indian wedding events. While Judith Leiber works with Indian designer Suneet Varma to create bridal collection of bags, Canali’s Nawab Jackets are meant for the groom looking for a royal touch. Bags by Gucci, Canali, hampers from Harrods or scarves and ties from Salvatore Ferragamo are sourced by the hosts to give away as return gifts to the attendees at his daughter or son’s wedding.

The opportunities are numerous in the wedding/bridal market in India. From local boutiques to established traditional retailers and regional brands to renowned Indian designers and global players, everyone is vying for a share of the Indian consumer’s wallet, who is now more than willing to splurge on a big fat wedding.

During the month of May FashionUnited will focus on bridal wear. This is the first episode of a new series on the size of the wedding industry. Stay tuned for the next installment on May 13, which looks at China. For all reads on bridal wear, click here.