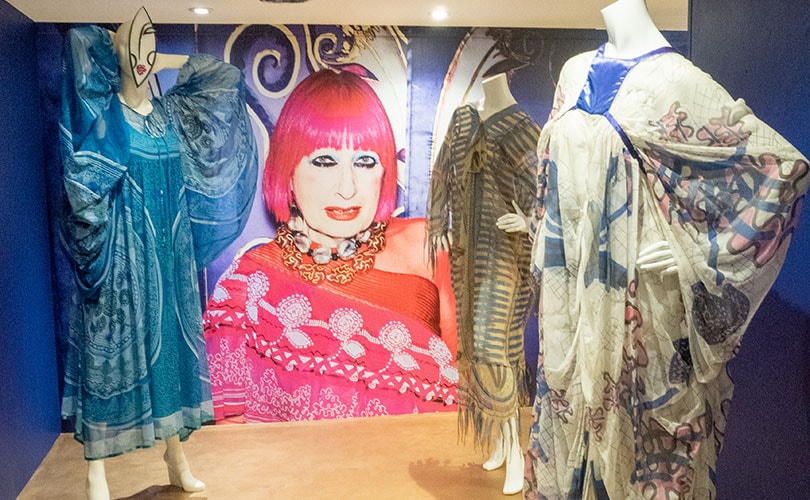 Inside Zandra Rhodes: 50 Years of Fabulous

Dame Zandra Rhodes is probably one of the most iconic and recognisable fashion designers in the UK, not only for her bright pink hair, but also for her free-spirited take on colour and pattern, and the Fashion and Textile Museum is celebrating her five decades in fashion with a retrospective exhibition dedicated to her fascinating career. 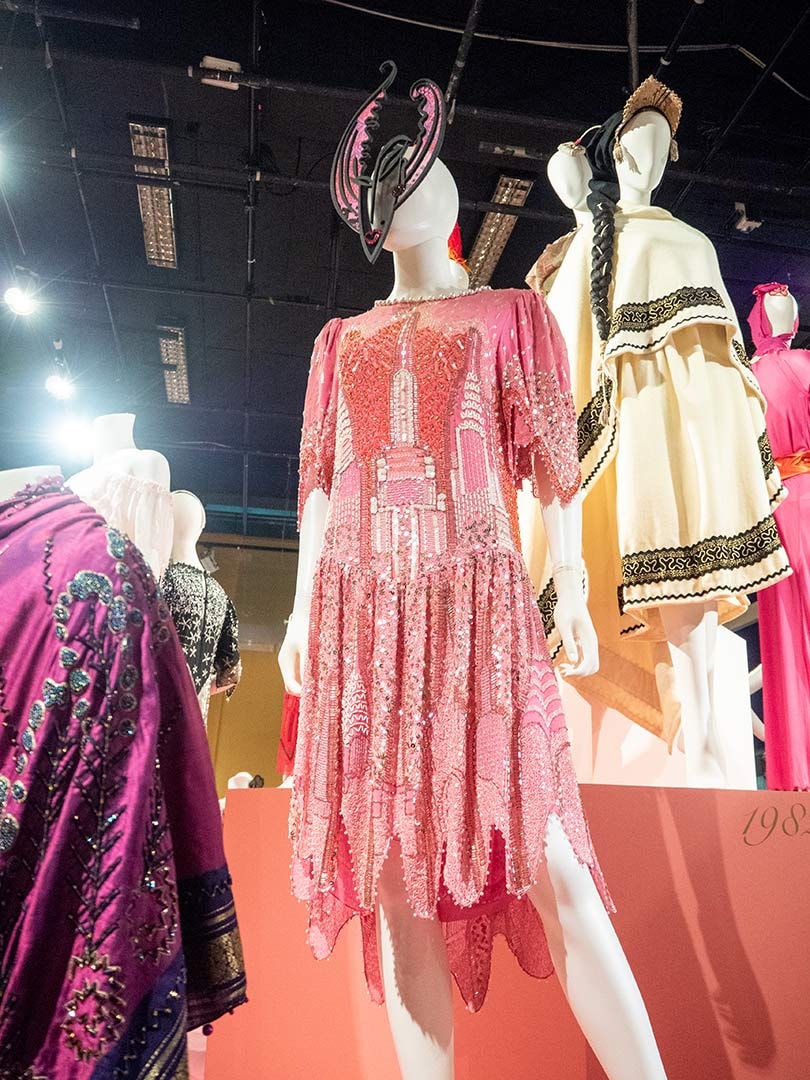 “The dresses tell the story of Zandra,” explains Dennis Nothduff, head of exhibitions at the Fashion and Textile Museum on a press tour of the ‘Zandra Rhodes: 50 Years of Fabulous’ exhibition, which features a dress from each year of Rhodes’s career, the first dates back to 1969, an ankle-length, screen-printed kaftan, while the most recent is from the Jubilee collection, designed in 2019 to mark her 50th anniversary.

Nothduff added: “This is not quite a retrospective, as we are celebrating Zandra’s collections, while also looking to the future.” 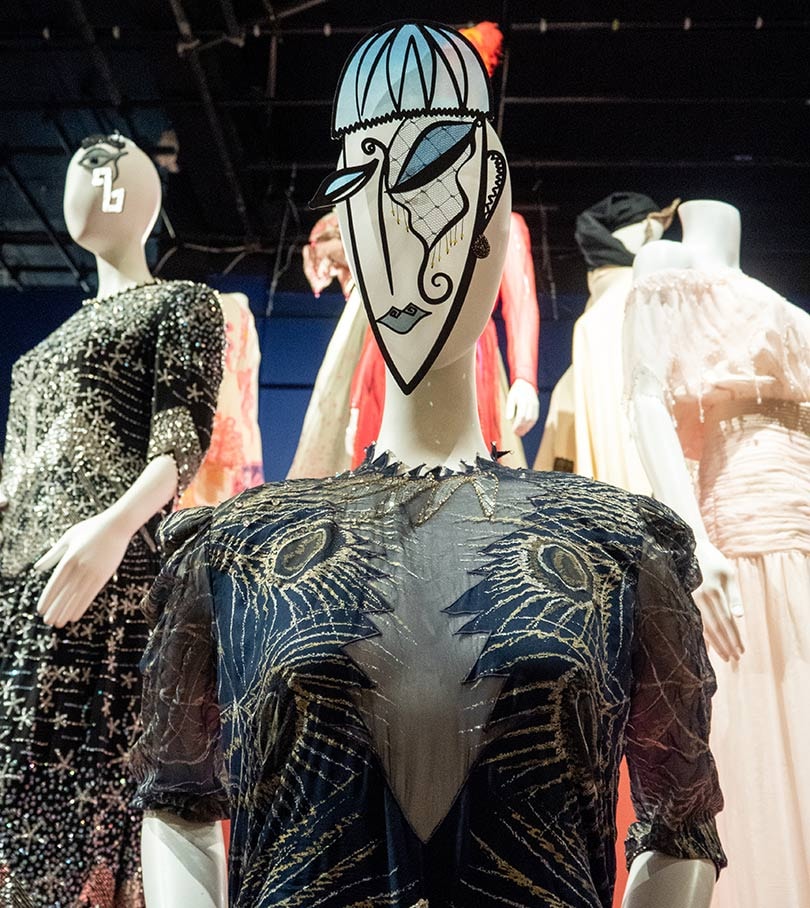 Opening to the public on September 27, the exhibition marks the largest-ever dedicated to Rhodes, and features not only her incredible designs, including pieces from her iconic 1976-77’s influential, punk-inspired ‘Conceptual Chic’, the 1978’s ‘Star Wars’ collection and her highly-successful archive collection for Matches Fashion in 2016, it also delves into her unique process of making textiles, her take on opera costumes, a look inside her sketchbooks, which apparently she is never far away from, as well as how she got started in fashion. 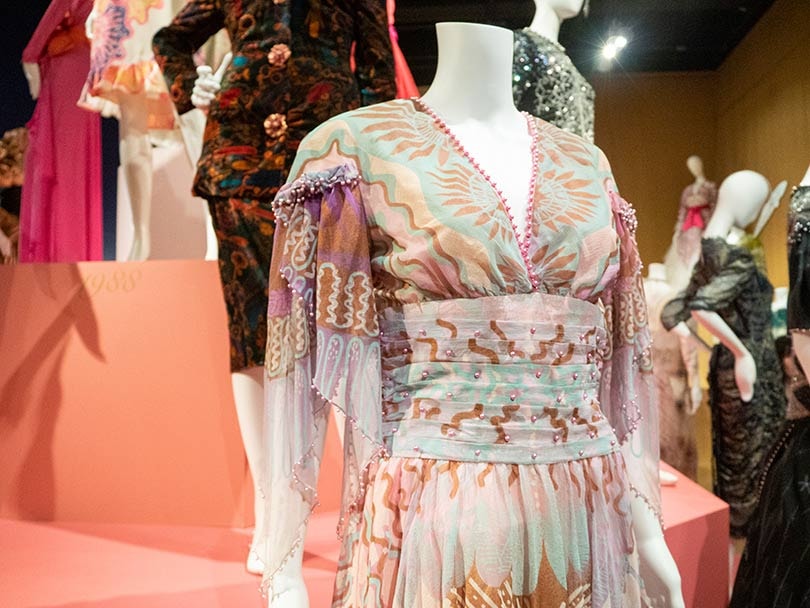 It is also fitting that the exhibition is taking place at the Fashion and Textile Museum, as Rhodes herself founded the space in 2003 to not only showcase a programme of changing exhibitions exploring elements of fashion and textiles but to also inspire a new generation of creatives, with the museum becoming a hub of ideas, networking and learning for the industry. 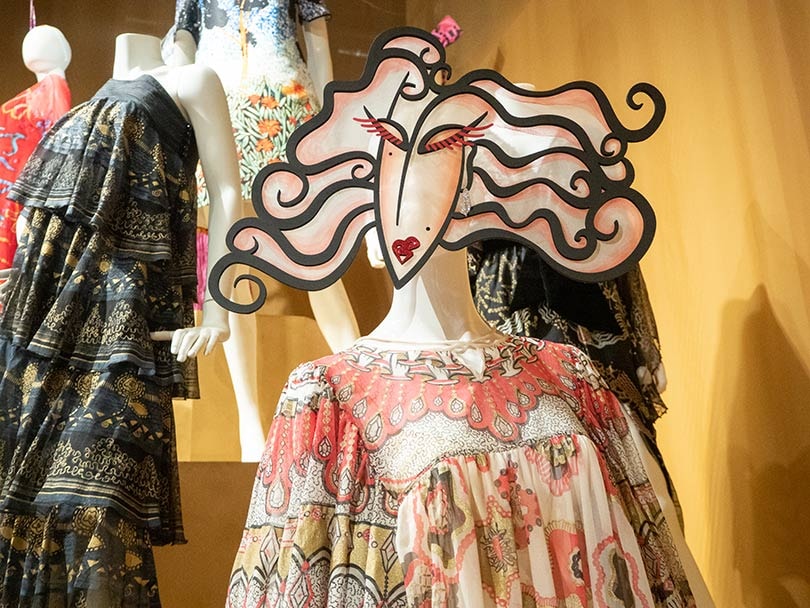 The main gallery space has been reimagined in Rhodes’ style, with the feature walls dripping in the designer’s classic gold, reminiscent of her iconic lamé gowns, which can be seen within the central, multi-tiered plinth that features more than thirty ensembles against a backdrop of pink and red, whilst individual golden plinths highlight signature pieces against walls hung with chiffons, the fabrication that Rhodes has made her own.

Once you’ve weaved through the years on the ground floor admiring Rhodes’ gorgeous prints, from her 70’s ‘Giant Smail Flower’ design to her iconic ‘Button Flower’ and ‘Chinese Squares’ from the 1980s, the dress worn by Princess Diana, the 2018 fan pleated jumpsuit in a dramatic shimmer satin, her first sari as part of her collaboration with Indian craftsmen and artisans, and her pieces dedicated to New York featuring the Manhattan skyline, you then head upstairs to what the designer has called her “forest of chiffons”. 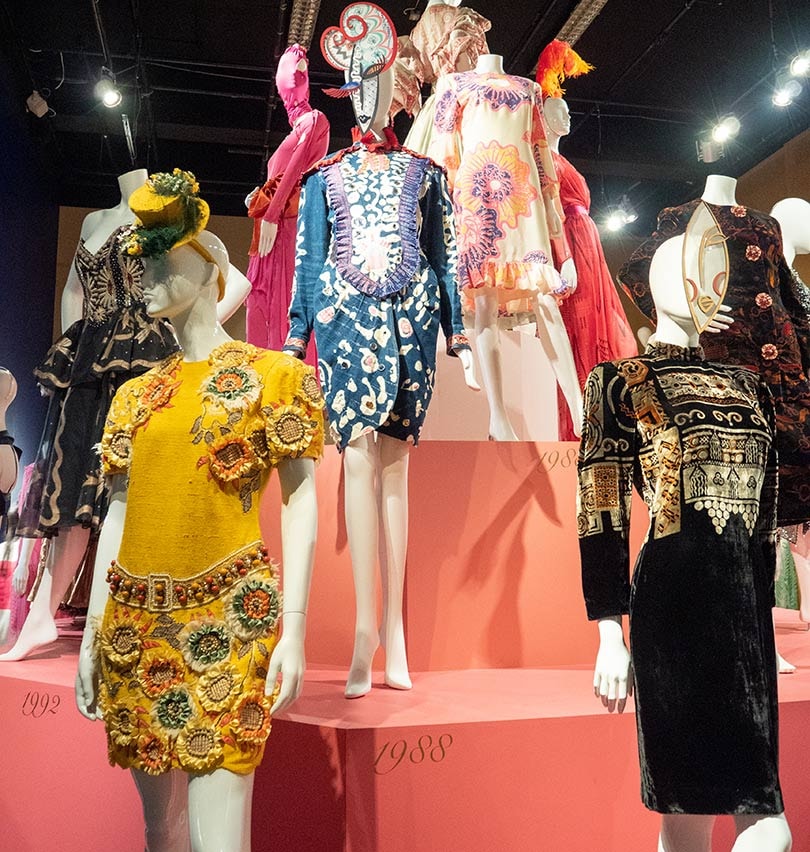 The Mezzanine Gallery is dedicated to her textiles, the process of making her prints and dresses, and features over thirty hand-designed, screen-printed textiles that hang in rows, filling the space from floor to ceiling and allowing visitors to wend their way between original versions of some of the designer’s most iconic prints from throughout her career. Here, you get to see some of her most iconic prints, including the ‘Mexican’ collection featuring sombreros and the ‘Indian Feathers’ design, as well as learn about the unique process that Rhodes uses to create her incredible dresses. 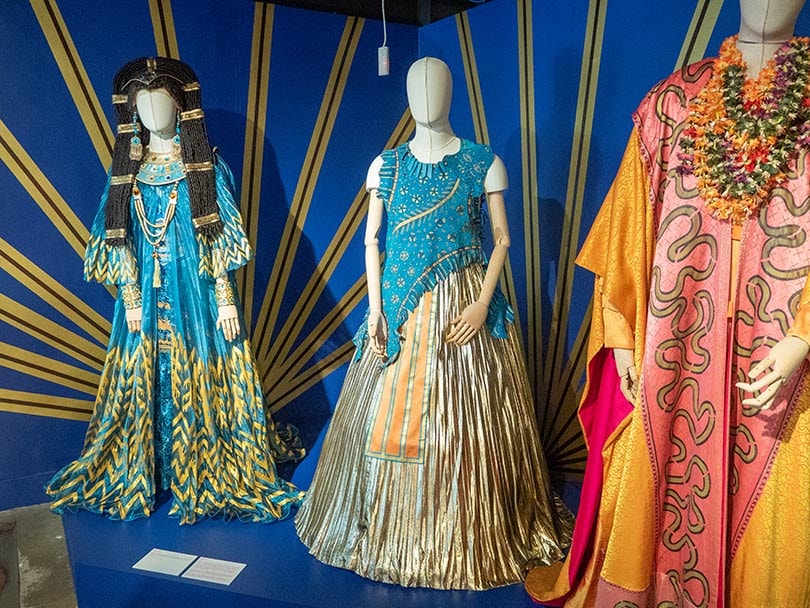 Across the gallery, The Magic Flute costumes Rhodes designed for The English National Opera’s production of Aida, co-produced with Houston Grand Opera and San Francisco Opera, are on display, which Rhodes explained was a “challenge, but I like making someone who is a size 18 feel like a fairy princess,” during the press tour.

These are displayed alongside Rhodes’ celebrity designs, including a replicate of a pleated top she made for Freddie Mercury, which was used in the Bohemian Rhapsody movie, and a sample of the dress she created for singer Barbra Streisand worn at her London concert earlier this year. 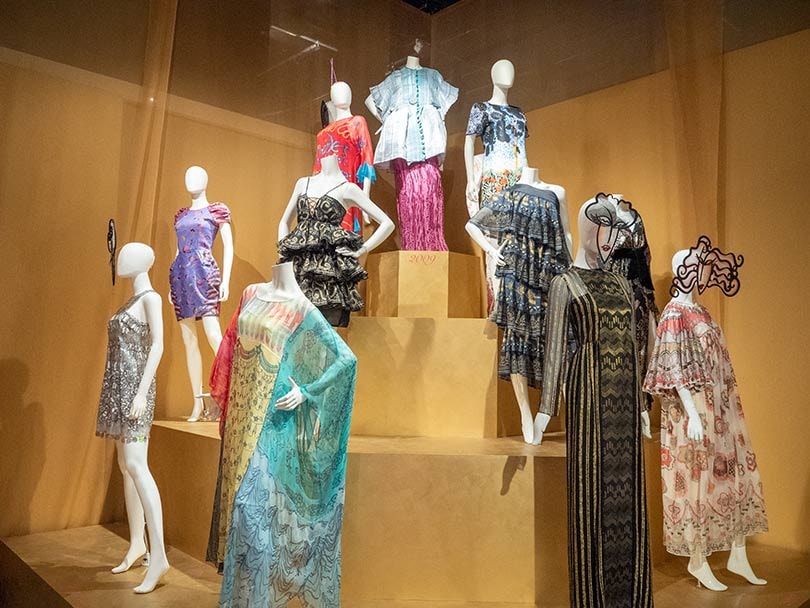 The final stop on the exhibition is within The Fashion Studio, where a collection of Rhodes’s sketchbooks, alongside larger than life reproductions of her illustrations, are on display. Rhodes is famous for having a drawing a day rule, and rare examples of her daily life in sketches can be seen for the first time, offering a new insight into her design process that has remained largely unchanged across the last fifty years. 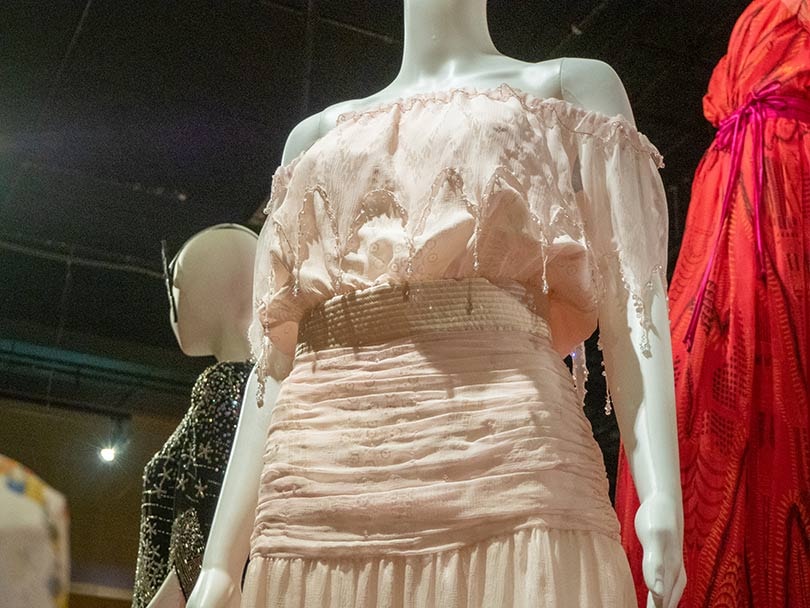 Other highlights of the exhibition includes her 1972’s ‘Shell Collection’ silk chiffon gown, still produced today for Matches, examples of her 1981’s ‘Gold Renaissance’ collection, looks from which are currently featured in the Metropolitan Museum of Art’s exhibition Camp: Notes on Fashion, as well the now-iconic quilted ‘calico coat’ from the 1969’s ‘Ukraine and Chevron Shawl’ collection.

Zandra Rhodes: 50 Years of Fabulous will run at the Fashion and Textile Museum from September 27 to January 26, 2020. 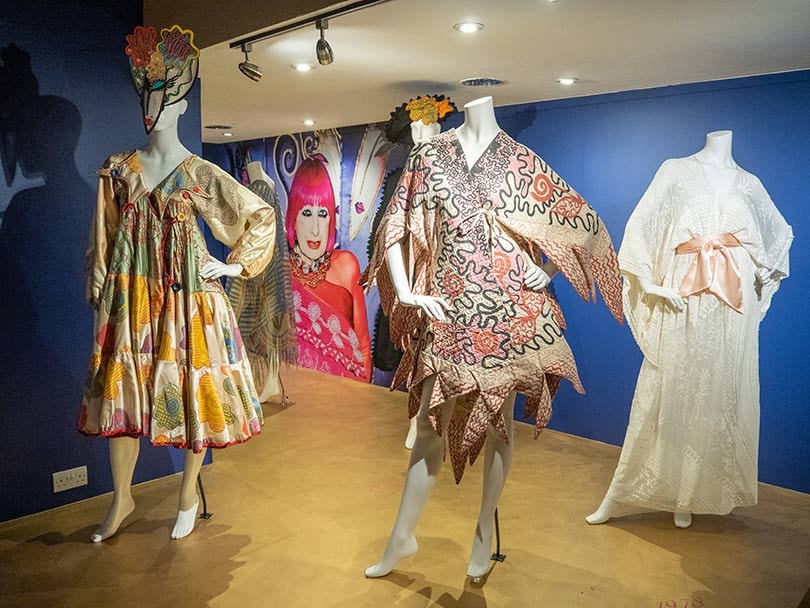