Kansai Yamamoto arrives on stage in the auditorium of the Brooklyn Museum in a shiny black and gold suit, and says he dressed down to blend in with New York City’s minimalists. Otherwise his life is filled with the color––which he likens to oxygen––which brought him to the world’s attention in the 70s as the clothier of David Bowie’s technicolor alter ego, Ziggy Stardust. But the designer is also every bit the performer, playfully responding to questions from the New York Times’s Fashion Director and Chief Fashion Critic, Vanessa Friedman, with a twinkle in his eye, sometimes through his translator, and sometimes confidently, if slightly eccentrically, in English. Friedman doesn’t attempt to rein him in from his many tangents and random anecdotes because the audience is clearly lapping it up. 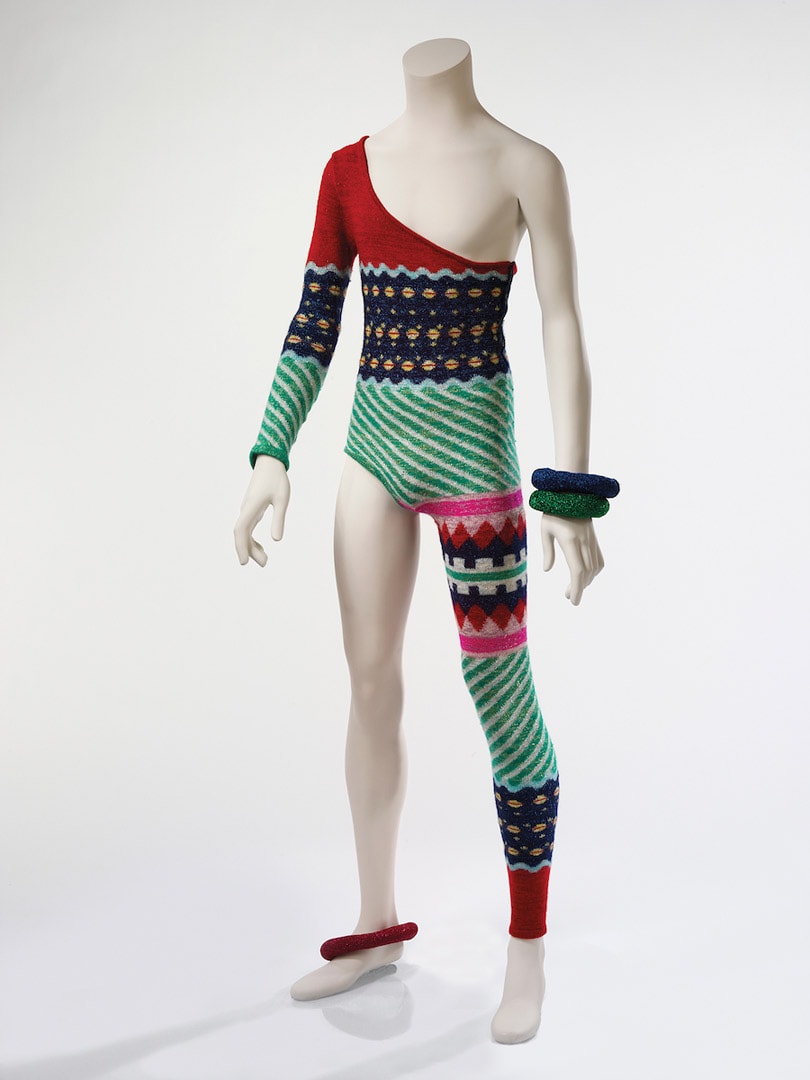 He tells of how Bowie had independently got hold of a few of his pieces after the designer’s first show in London in 1971, and it was not until 1973 that they met, when Bowie’s producer telephoned Japan and summoned Yamamoto to NYC post-haste. The designer arrived as instructed to Radio City Music Hall where his first sighting of the singer was of him descending to the stage on a disco ball. He felt an immediate emotional connection. On a practical level he was also struck by the speed of the singer’s costume changes which later inspired all the snap closures on his Ziggy Stardust costumes. The following night, while Yamamoto’s young daughter, and Bowie’s son, Zowie, played together, they discussed a collaboration.

“Unlike me, Bowie was quiet, shy, but on stage he flips a switch and becomes David Bowie,” says Yamamoto. “Me, I’m always that way.” But they shared a love of what the designer calls “radical appearance,” and when asked what they learned from each other, he replies that through Bowie he developed his understanding of Western dress while he helped Bowie interpret Eastern clothing. He agrees that he sees a direct line between what he created in the 70s for Bowie and the current conversation on gender and dress. “I approached Bowie’s clothes as if I was designing for a female,” he admits. “Notice there is no zipper in front.” But he feels proud seeing how the younger generation attending the “David Bowie Is” exhibit can express themselves when compared to the societal restrictions he encountered in Japan 50 years ago, as a self-taught, broke, designer launching his career at the age of 21. A photographer had snapped a picture of him walking along London’s Kings Road and it was featured on the cover of Life magazine. “I felt every day I was the model in a fashion show and everyone around me were members of the audience,” he says. “There were many times, people looked at me weird.” 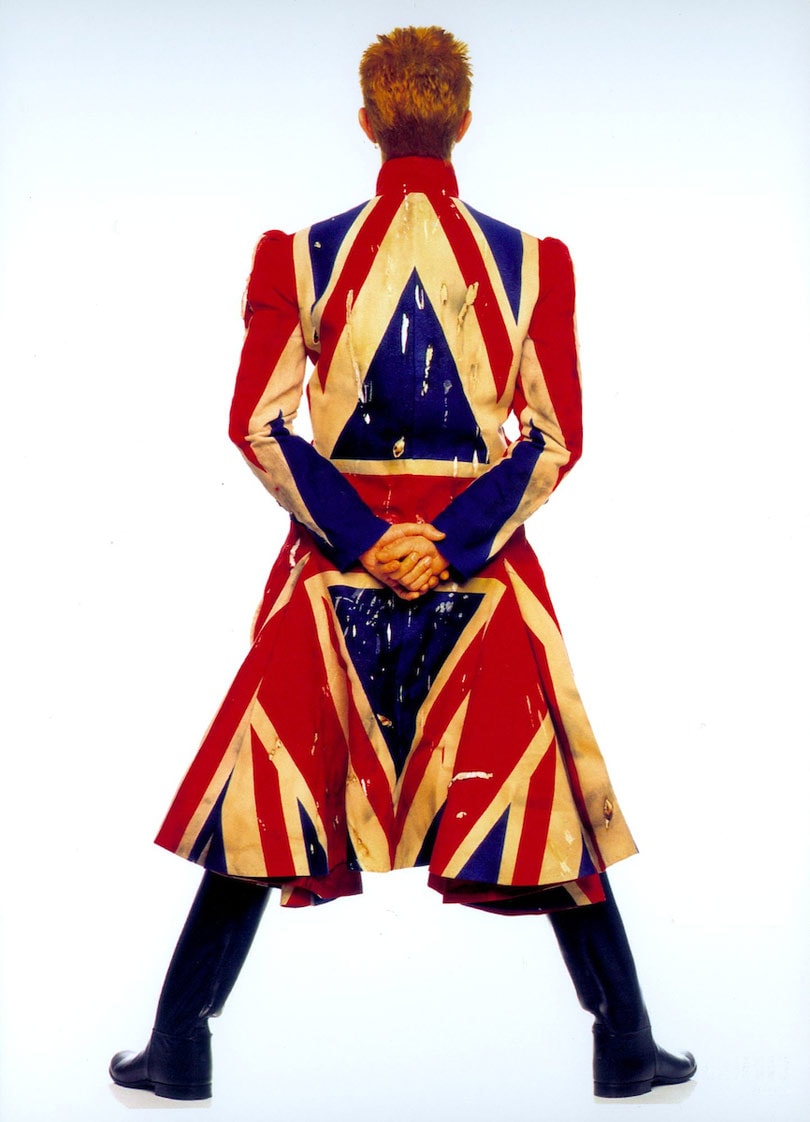 His favorite creation for Bowie, he says, is the Tokyo Pop black and white jumpsuit with bowed legs while another favorite piece from the exhibit is the Union Jack coat by Alexander McQueen. But when pressed on who is favorite fashion designers are, Yamamoto shakes his head, stating instead his admiration for the Manhattan store Opening Ceremony.

Friedman asks if the designer believes there is a connection between color and music. “I’m a visual person,” he explains. “It does not pain me not to listen to music for a week. When I see the sunrise, I see music.” 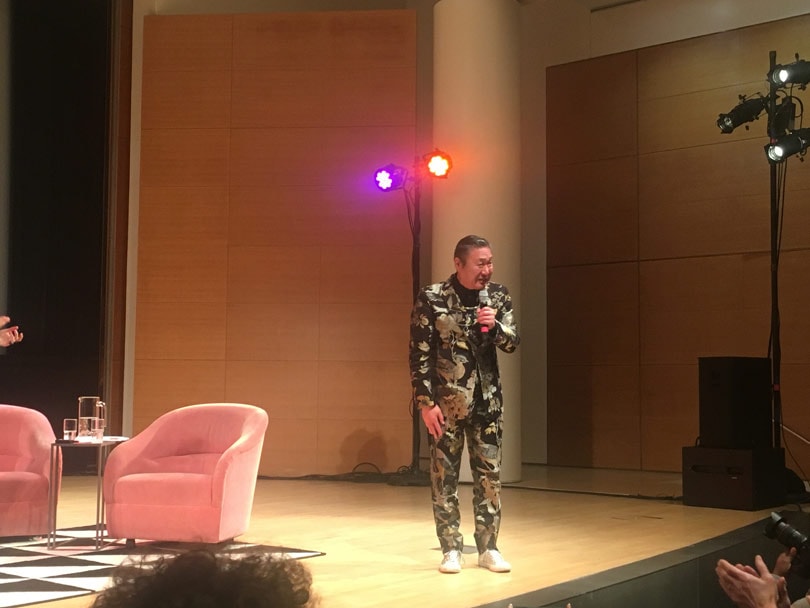 He credits Bowie’s influence on him with opening up other avenues of creativity to him, and for the past 20 years he has been involved in producing shows of ever-greater magnitude. He established the first fashion school in Hanoi. About 5 years ago, he and Bowie had discussed doing a “supershow” together for which he would create the clothes and also produce it. He admits to owning no car but possesses two air balloons and his dream was to have Bowie sing from inside one of them one day. Next March, he heads to the North Pole and a climate of -40 degrees to get inspiration for conceiving a show on ice, with tents, which he hopes to stage in 2 years time in London or New York. “It means I am still arriving,” he says with a smile.