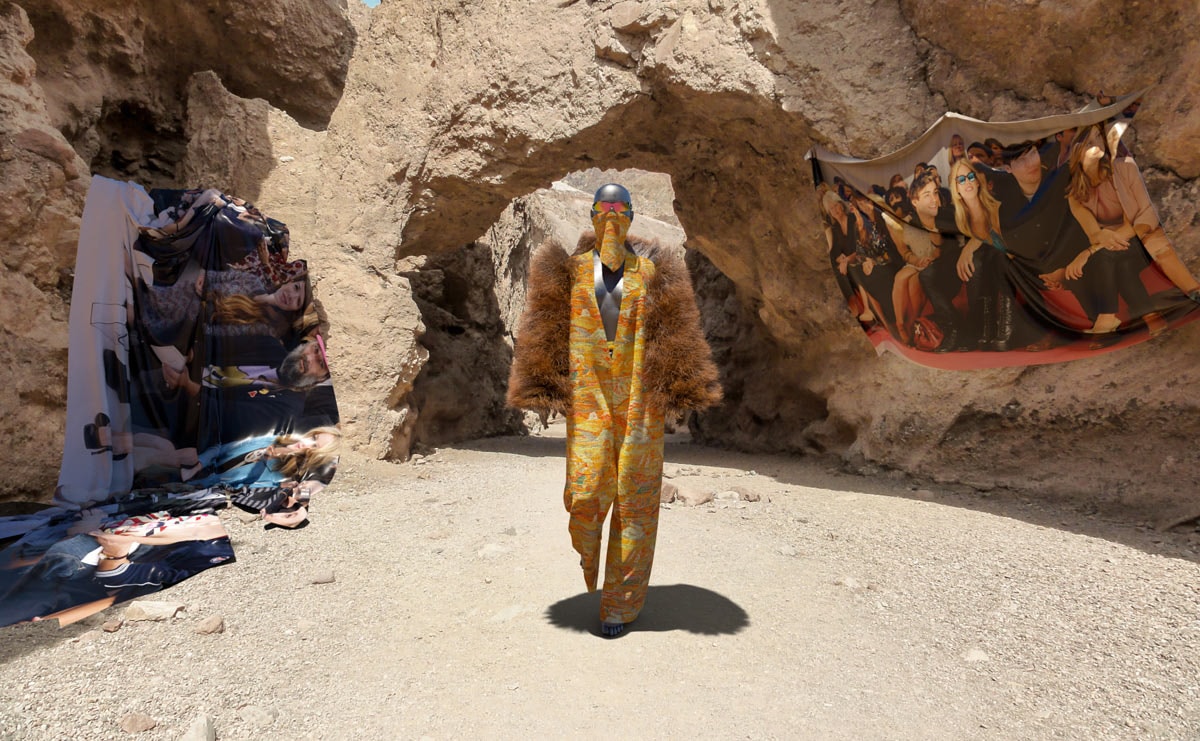 Last month, the first digital couture dress by Amsterdam-based fashion label The Fabricant was auctioned in New York. It sold for 9,500 US dollars. While it may look deceptively real, the flowing fluorescent garment does not exist in reality; in fact, it is no more than a digital file. Behind the concept of virtual clothing lies a bold vision about the future of fashion, one that simultaneously predicts how we may interact with each other in the future.

The Fabricant sold its couture piece on 11 May at a blockchain summit in New York. Now purchased, the silver bodysuit with transparent coat will be mounted on a high-resolution photo of its new owner – digitally tailored, so to speak. Admittedly, the blockchain community may be more open to futuristic tech experiments, but the idea of exclusively virtual clothing also bears considerable implications for the wider fashion world.

“In an environment that makes the impossible possible, that wastes nothing but data and exploits nothing but the imagination, the very idea of physicality seems outdated,” said Amsterdam-based start-up The Fabricant in an Instagram post. “In this new world, there’s no such thing as factories, supply chains, and sample sizes. There are no delivery trucks to wait for, no clothes to launder and no closets to de-clutter”.

Garments for our digital life

Full of virtual items, the company’s Instagram feed reads like the manifesto of a new digital fashion world. In his glass-walled office dotted with green plants in the heart of Amsterdam, The Fabricant’s co-founder, Kerry Murphy, lays out his vision on one sunny afternoon. While the internet has given birth to new ways for people to interact like never before, he believes that what we have today is just the beginning of our digital life.

“What’s already happening is that we’re building a virtual layer on our physical existence and that’s social media,” said Murphy. He speaks fast, sounds optimistic, a tireless start-up founder. “But when you think about social media, it’s actually quite crude in the sense that it’s only the established layer where we’re starting to lead our lives in. So what would be the next step?”

By crude, he means the current formats of text, voice and video that connect us on social media with no real interaction between one another. He believes that the future will see the ways we interact in the virtual world resemble much more closely how we do physically. Instead of sending messages we would interact with digital 3D versions of ourselves; our Instagram profile, for example, could be an avatar. The Fabricant, which Murphy co-founded with Dutch designer Amber Jae Slooten, has already created a digital fashion collection our “digital twins”.

“Now, we pretty much purchase the same items as in the past 50 years. But besides e-commerce and new platforms, there is no clear innovation per se. It still has to be shown, how digitalization will define the fashion industry,” Marjorie Hernandez, chief executive officer at Berlin-based startup Lukso, said by phone. She is currently setting up a blockchain system for the fashion industry and works with Murphy: The Fabricant plans to sell its digital collection on Lukso’s app, which will launch by the end of this year. Using blockchain technology, each piece of digital couture is given a unique identification number - like the dress auctioned for 9,500 US dollars - to give each garment file a unique identity and make it difficult to duplicate, increasing the value of the individual pieces for collectors.

Scandinavian multibrand retailer Carlings launched a digital collection last year, emphasizing through its advertisement the way its pieces don’t impact the environment. The trousers and coats from the first collection cost up to 30 euros and are 'fitted' onto a photo of the customer after purchase. The concept seems to have been so successful that the second drop has been announced on the website. Digital fashion could satisfy our need for novelty and self-expression without burdening the environment: a virtual dress only needs to be mounted on a photo of a person before the picture is posted on social media and becomes part of our lives.

With the rise of the fast-fashion model, the garment industry followed trends ever faster, but also more wastefully. If clothing was purely digital, the industry wouldn't have to worry about working conditions and pollution in supply chains, or about unsold inventory and growing mountains of garment waste. Many companies are also suffering economically from the over-distribution of clothing on the market, as consumers - particularly in affluent countries - already possess more than they actually need and don’t buy at full price. But will consumers purchase clothes they can't wear?

“Digital collectibles, digital fashion, digital sneakers are going to be a huge market in the near future,” Hernandez said. As a sign of proof, she points to the online game Fortnite Battle Royale. Players can buy virtual clothes for their characters which soon became a status symbol among teenagers. The online game has offered a preview of the potential of virtual collectibles, she explains. Players can buy so-called 'skins' for their characters, which quickly became a status symbol among teenagers. After all, clothes do not only keep you warm, they also offer a means of expression. Why shouldn't this take place exclusively in the digital world, where people increasingly spend their time, Murphy said.

“Is it really something that the mass market would get excited about at this point? I don’t think so, but I can only imagine it coming because pretty much all of us are on social media,” Murphy said. In five years there could be a market for digital clothing, he added, sounding somewhat impatient. For a moment, he seems frustrated from constantly repeating his admittedly futuristic vision to non-believers. More reassuringly, he adds: “Now, I already feel that by next year, we can be a sustainable company by only selling digital fashion. But it takes business vision and pushing the envelope.”Until then, the company will finance itself through 3D projects for fashion companies. For example, The Fabricant recreated the anniversary collection of Hong Kong concept store I.T in 3D images.

On the border between reality and fiction

The first collection was launched last September and a new one is planned every year. Like real couture, The Fabricant's detailed designs are time-consuming and costly. The visualization of the first collection alone took more than a month, and the entire development took more than a year. Creating things that look real in 3D is currently more expensive than a photo shoot or video, so movies are still shot in real surroundings and 3D effects are rarely used, explains Murphy, who worked with 3D animation for the film industry before founding The Fabricant.

The pieces of his fashion label are also tailored on the borderline between reality and fiction. "We are doing something that wouldn't be physically possible," says Murphy. He demonstrates on his computer how patterns are assembled into digital designs in 3D computer programs before being animated using other software. The pieces look deceptively real, even though they’re not achievable in reality. Gravity, for example, is suspended with the fall of the fabric in one of his digital garments. This wouldn’t be possible in a physical piece, Murphy explains while tracing his fingers along the seams of the digital yellow overall with oversized fur sleeves.

Back on the street, the bright sunlight is dazzling, the cloudless blue sky and people along the canal suddenly appear surreal; the bicycle bells ring as if from afar. And the echo of Kerry Murphy's last words still resonates in the mind: "The world no longer needs physical clothing. There are so many beautiful things that already exist, does it need another? Our answer is no."