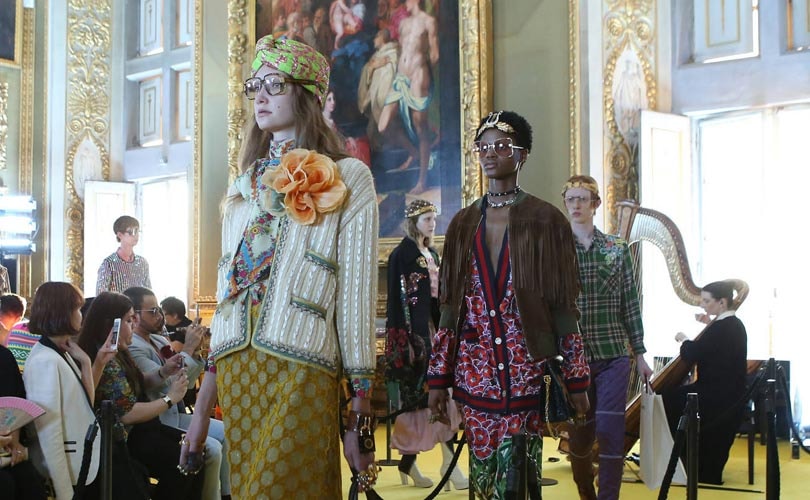 Fashion week roars into Milan on Wednesday with hotly anticipated shows from fresh talent as well as from luxury titans including Moschino and Armani, who are battling for their share of a rebounding market.

Gucci kicks off the six days of catwalk strutting with mighty momentum at its Italy-based house, which is booming under mastermind Alessandro Michele and the geek chic aesthetic he has established since taking the reins in 2015.

The Spring/Summer 2018 collection starring in its Wednesday show is also Gucci's first since French parent company Kering announced a pledge earlier this month to ban ultra-thin models from their brands' advertising and runways. Luxury group LVMH, which counts heavyweight Fendi among its labels, has signed on as well to the ban that comes after repeated scandals in the fashion industry about anorexia and the mistreatment of models.

For the dozens of collections that will be hitting the Milan catwalks, expect a riot of every colour of the rainbow. The 1990s are also back with low-slung trousers, cut-out bodysuits and boxy jackets. Vertical stripes, traditionally the preserve of old-fashioned pyjamas, will be there too.

Expectations are building for British talent Paul Surridge, who will on Friday show off his maiden collection since being named creative director in May of Roberto Cavalli, known for its sexy rock'n'roll attitude.

Husband-and-wife team Luke and Lucie Meier are presenting their first designs on Saturday since being tapped in April as creative leads of minimalist stalwart Jil Sander. The Meiers, a rare married duo of co-directors, come from Dior for her and Paris-based menswear brand OAMC via iconic streetwear label Supreme for him.

Very good times, for some

"Lucie and I work together very naturally," Canadian Luke Meier told Vogue in June of his Swiss-born wife. "We have had an open dialogue about the approach to design for over 15 years and have often spoken of working together one day."

Newcomers to the Milan calendar also include the-sirius, a young Seoul-based label known for futuristic designs, which will indulge its ultramodern urge with a Thursday show on the campus of Milan's Leonardo da Vinci Museum of Science and Technology.

But it would not be fashion week in Italy's capital of clothes and accessories without the kings and queens of the multi-billion euro luxury goods industry like Fendi, Ferragamo, Versace, Moschino and Prada. These European behemoths -- or some of them, anyway -- are seeing sales jump after years troubled by the triple whammy of a slowdown in Asia, currency volatility and customers staying at home after a string of terror attacks in Europe.

"While in the past good meant good for everyone... now the situation is very good for some and very bad for others," said Stefania Saviolo, a fashion and luxury expert at Milan's Bocconi University. "It depends on the category, the brand, it depends on many things," she told AFP.

The rebound has been led by houses like Gucci which saw its sales in the first quarter of 2017 grow at their fastest pace in 20 years. But the flip side is labels like Prada that just cannot seem to remember where they put the secret sauce. Prada has put some of the blame for soft sales on tourists being driven away by a strong euro.

However, the winners and losers in the war for luxury buyers' hearts -- and cash -- must remember that nothing is forever. Saviolo said: "You don't know how long it will last. Cycles are getting shorter and shorter. The market gets tired of styles very fast." (AFP)

The international Fashion Week season for women's ready-to-wear kicks off in the month of September, with all eyes set on New York, Paris, London and Milan for next seasons latest trends. For all the women's wear catwalk season must reads, click here.
Gucci milan fashion week prada womenswear womenswearcatwalkseason