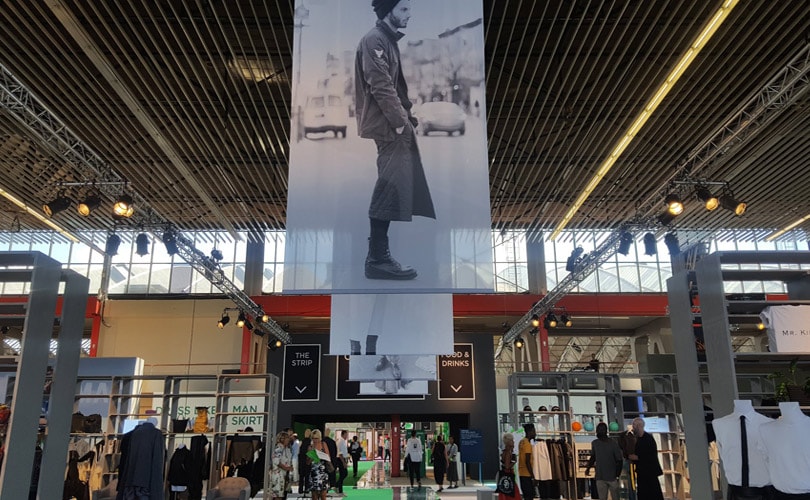 Despite numerous efforts to introduce the skirt as a wardrobe staple for men in the Western hemisphere， it has seldom left the catwalks since the 20th century. The summer edition of Amsterdam fashion trade fair Modefabriek provided the garment a stage in one of its curated areas. Could this be a sign that the garment will manage to liberate itself from its current niche market?

Large black and white banners featuring skirted men were hung over the fairground to endorse the garment. Promotion of the skirt could not come at a more opportune time, as gender boundaries presently soften at men fashion weeks from Paris to New York. Amidst booths displaying menswear that will be found in fashion retail stores next season, it reads “Dress a like a man, wear a skirt” on the walls behind the labels that blur the lines between what’s considered masculine and feminine apparel. 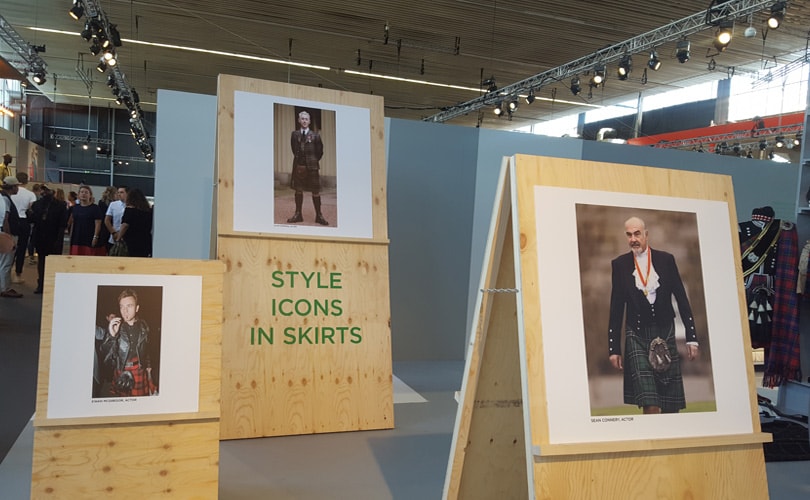 “For a lot of men wearing a skirt is way out of their comfort zone. It’s very feminine for them”, Amsterdam-based designer, Spike Spijker, said at Modefabriek. “I hope to contribute a bit to the acceptance of the men skirt again.”

Spijker, a bearded man wearing a black skirt, himself, paired with white converse sneakers, has been curating the themes of the menswear section at Modefabriek for several seasons. After featuring suits and trench coats in the past, he decided it’s time to start a discussion about men skirts and recruited other brands and companies to join the cause. Spijker also included a skirt in the uniforms of the Modefabriek staff designed to boost the prominence of the theme. The A-line skirt can be worn by both genders and was made from canvas cotton, a workwear fabric, in a shape suitable and comfortable for men.

As the fashion retail landscape changes with the new technology on the horizon, trade fairs are also forced to rethink their business model. For the past few editions, Modefabriek has sought to show “more than fashion”, developing into an inspiring venue appealing to all fashion professionals, beyond strictly a business meeting for buyers and brands. The fairground aims to offer inspiration beyond the business for next season, hence triggering a discussion about men skirts.

During a time when traditional gender roles are questioned and mainstream retailers like Asos and H&M come to embrace unisex collections, Spijker thinks that the discourse about gender neutrality could also help the skirt leave its current niche in menswear. “My opinion is that men should be able to wear what they like”, he said. 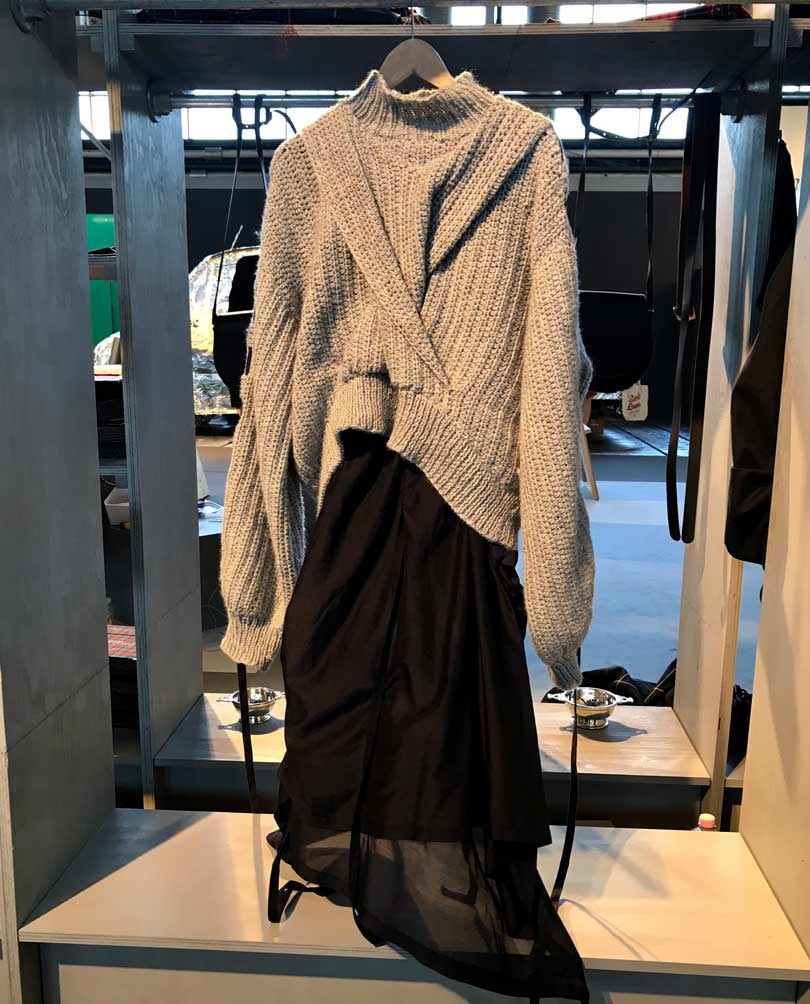 Dutch menswear designer Sophie Roumans defies Western clichés of masculinity in her designs on the fairground. The black, skirt-like piece from her 2017 collection presented at Amsterdam Fashion Week was inspired by the Boubou, a traditional garment worn in various parts of Africa.

No conversation about skirts in menswear is complete without mentioning the Scottish kilt. Even though Sybren Vis, the owner of House of Carynette that shows in the curated section, insists that the kilt isn’t strictly a skirt. A kilt is an officially recognized male garment in the European Union, a skirt can be worn by women and men, he explained. As opposed to a skirt, a kilt is a male dress that follows traditional procedures and derives from a so-called great kilt or “Feileadh Mòr“ in Gaelic.

Watch the video to learn more from Sybren about how a traditional great kilt was worn.

Following their passion for playing bagpipe, Sybren and his partner Annette Plantinga, began selling Highland outfits and accessories in their shop in Leeuwarden, in the north of the Netherlands in 2001. She is also training to be the first certified kilt maker in Europe outside of Scotland. 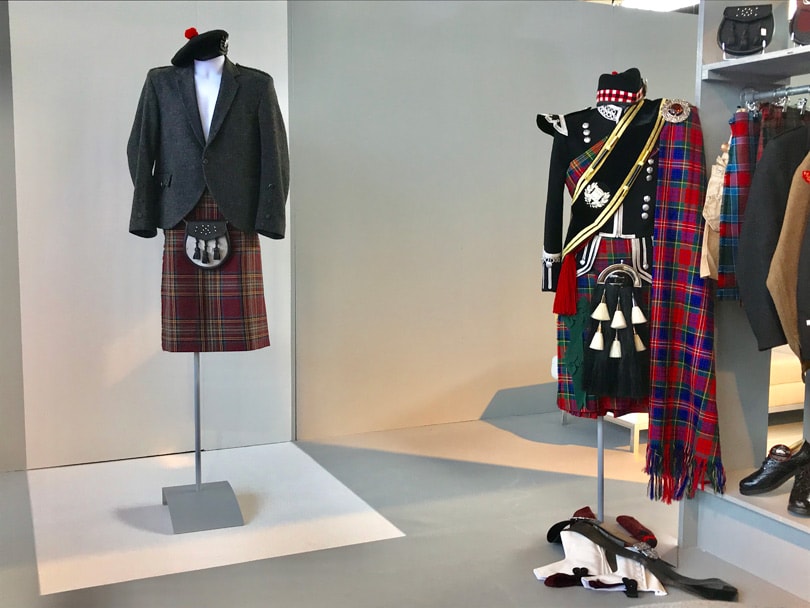 “For me, the skirt has been an ideology for some years because I see more men in the world wearing a skirt than trousers. Only in the Western world, in Europe and the U.S., do men wear only pants“, Gerold Brenner, clad in a red checked shirt and dark blue denim skirt, from Zurich, Switzerland said. An Instagram personality with more than 15,000 followers, Brenner worked as a designer for German and Swiss fashion companies before starting his own label, to focus on making a more sustainable fashion industry. His pieces include denim skirts from recycled fabrics and shirts hold together by the sashiko technique, a traditional Japanese craft to mend clothes. 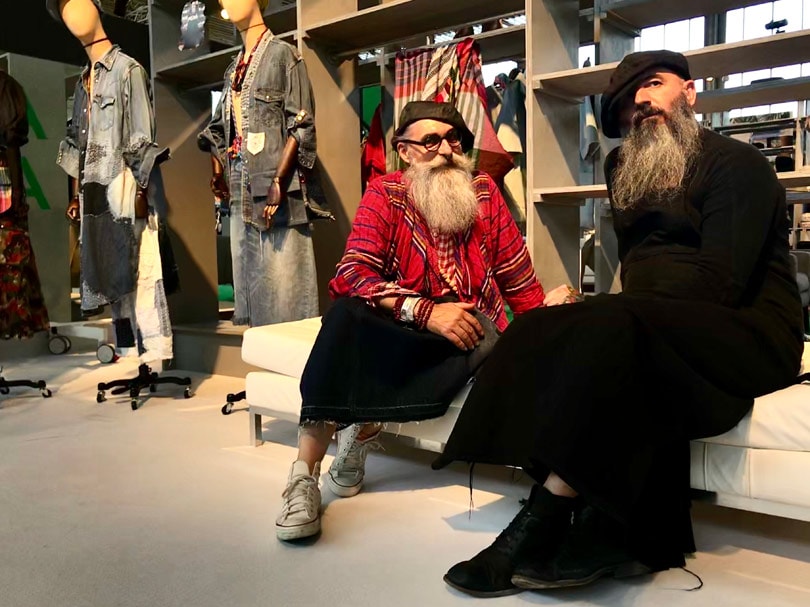 French designer Jean-Paul Gaultier famously advocated men skirts on catwalks over 35 years ago. Today’s acceptance for the skirt in menswear may also come from the contact with other cultures, where it’s common among men, said Brenner: “We live in a multicultural world with people familiar with the traditions of wearing skirts. This is new and therefore I see a chance, people are more open-minded now.“

Another ambassador for the men’s skirt on the floor, could be found in Davide Giannuzzi, the designer behind Mr. Kirt from Milan, Italy. His label only sells skirts for men made with mostly natural fabrics, each piece is individually stitched after it has been ordered. 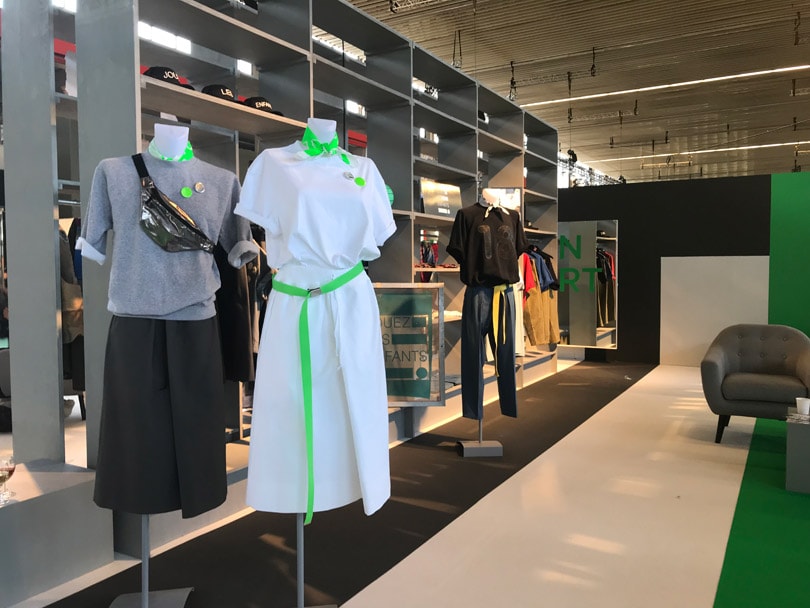 In the end, it may also be more about the design than the idea of wearing a skirt, said Spijker. He is thinking about including his men skirt design for Modefabriek into the collection of his label Jouez Les Enfants, which works with vintage and deadstock items. He received many inquiries to buy his skirts and the staff who wore a skirt as part of their Modefabriek uniform loved to wear the airy garment on a hot summer’s day. “There is also a need,” he said. “There are a lot of men who would want to wear a skirt but cannot find the right one. For me, it was also a good experience to design a skirt.”

This story story was written with the assistance of Caitlyn Terra; video editing: Joanna Mania.