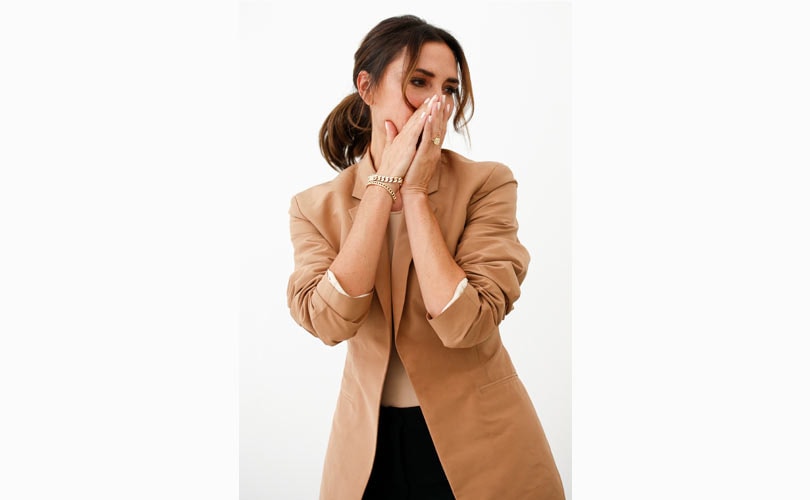 Victoria Beckham debuts at home to celebrate decade in fashion

Untested in the fashion world, Victoria Beckham launched her VB label in 2008 in New York, across the Atlantic from her native Britain.

A decade on, she exhibited at London Fashion Week for the first time on Sunday, in a triumphant homecoming of sorts for a now widely respected designer and entrepreneur.

The ex-Spice Girls singer oversees an empire comprising four clothing lines, more than 400 retail outlets in over 50 countries and offices in London and New York.

The show, which was largely closed to press photographers, took place in a contemporary art gallery next to her store in central London's plush Mayfair district.

Naturally, her husband, English football superstar David Beckham and their four children -- Brooklyn, Romeo, Cruz and Harper -- were on the front row. "Today is a milestone: our 10-year anniversary, and my first show in London," Beckham said.

"I'm really happy to be able to celebrate this season back home." At the outset Beckham, a longtime fashionista, faced a daunting challenge: convincing a competitive and demanding industry that she could make a lasting impression on fickle fashion fans.

Seizing the opportunity to surpass her status as a pop star and footballer's wife, she has gradually earned widespread recognition, even from fashion luminaries such as Karl Lagerfeld, the creative genius behind Chanel. "Many saw her as just another example of a celebrity wanting to have a fashion range with no formal fashion training," Andrew Groves, a professor of fashion design at the University of Westminster, told AFP.

"Through hard work and determination, she has proved those early critics wrong."

For the spring-summer 2019 season, Beckham is revisiting the classic chic that made her name in the business.

"This collection looks back, but also forward -- it explores the codes of the brand, the identity I've built up over the 10 years since my first show," she said.

"Fluid lines, a mix of masculine and feminine, print, an arresting mix of unusual colours -- these are our codes."

Her collection plays on contrasts by mixing her favourite shades, black, white and grey, with ethereal blue and ruby tones.

"It's also a collection about choice: there are slender and wide trousers, midi and full-length skirts, eased shapes and fitted forms. Brocade and satin, tailoring and fluidity," she said.

"There's a lightness throughout that feels modern. It's about dressing not our woman but our women -- reflected in our cast this season, as well as embedded in the clothes."

Smiling at the end of the show, Beckham went directly to kiss her family before greeting the invited guests.

In the space of a decade, Beckham, 44, has ventured into accessories, expanded sales internationally and online and multiplied collaborations with the likes of Reebok, Target and Estee Lauder.

Her style has also evolved, from the chic classicism that marked her first steps into haute couture to the more daring cuts and vibrant colours -- neon orange, mint green, lilac -- of more recent offerings.

"It's been an incredible journey, even when things can be challenging. I've had to learn incredibly quickly," she told The Daily Telegraph newspaper recently.

She claims the secret of her success is a tireless work ethic and the support of her family.

In a 2013 interview with The New York Times Magazine, Beckham she said the ambition for her brand was "to get bigger and bigger".

That came a step closer in 2017 with the formation of her Victoria Beckham Limited (VBL) company thanks to a 30 million GBP (39 million USD, 34 million euro) injection from private equity firm NEO Investment Partners.

It valued the brand at 100 million GBP, according to Business of Fashion magazine.

However, VBL will look to reduce its losses, which reached £8.5 million at the end of 2016 -- nearly double the previous year, according to its most recent financial results.

As for the Spice Girls, the most famous girland in history has re-formed for a 13-date tour in 2019 but without "Posh Spice", who has drawn a line under her first life as a pop star, according to British media.(AFP)