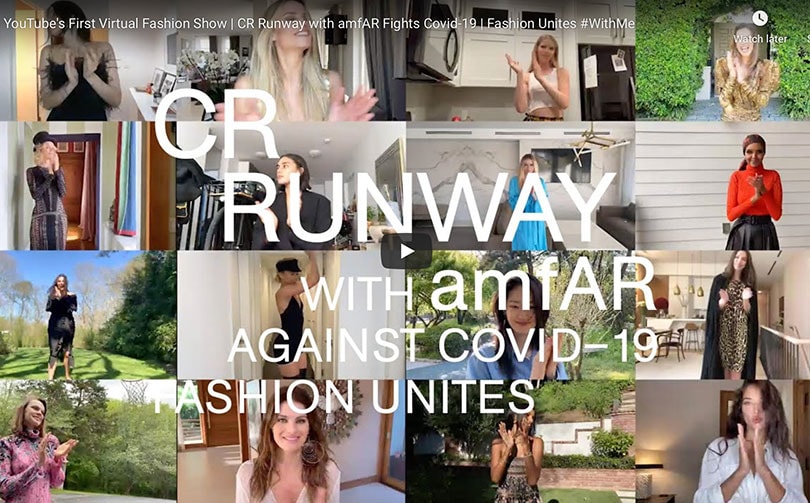 YouTube on Saturday hosted its first virtual runway show, an indication of how fashion week may look for the coming season. The online video platform held what it dubbed the “first-of-its-kind virtual fashion show and behind the scenes event of Carine Roitfeld’s CR Runway and amfAR against Covid-19.”

The event brought together some of the industry’s most iconic names and faces, filmed from their homes or places of social isolation, to offer a moment of creative inspiration and uplifting entertainment. The event aims to raise awareness for research efforts led by the amfAR Fund to Fight COVID-19 and was directed by Fabien Constant and hosted by Derek Blasberg, Head of Fashion and Beauty, YouTube.

Models were filmed walking makeshift catwalks in their kitchens, living rooms and balconies, giving viewers a glimpse of high fashion from inside their homes. The voyeuristic element added to the sparkle to the digital event, at which the clothes themselves took a backseat.

Hair and makeup, via tutorial

Doing their own hair and makeup, models including Alessandr Ambrosio, Winnie Harlow, Miranda Kerr and Stella Maxwell took virtual instructions, much like the YouTube generation of tutorials, from Sam McKnight for hair and Tom Pecheux for makeup. Model Karen Elson, in a video filmed in her bathroom, said: “Thank you, Carine, for giving me an excuse to get dressed up because I have pretty much been in my sweatpants for the past month.”

If this is the fashion industry’s equivalent of Lady Gaga’s One World concert, the effort to raise awareness and celebrate the pandemic’s frontline workers was both entertaining and inspiring. But as an effective new system to sell collections, replace the IRL experience of fashion week - where the focus despite show production is predominantly on the clothes - remains to be seen.

The international fashion calendar, from its copious catwalk presentations to complex manufacturing and out of season retailing may be skewed, if not fundamentally flawed, but without the tactile possibilities of seeing fabric, finishing and fit, digital presentations may prove a difficult sell for some.

The full show can be viewed here: https://www.youtube.com/watch?v=bm8mbAPAWG0.