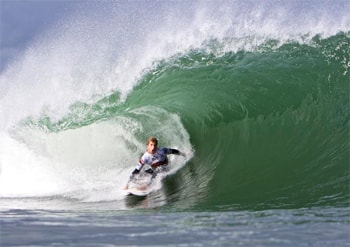 On July 26th, 2010 South Africa will turn its attention away from

the football pitches and into the ocean as the second ever O'Neill Cold Water Classic South Africa gets underway in Cape Town.

Massive swells and wild storms. Challenging waves in stunning locations. A perfect barreling left for the finals… the O'Neill Cold Water Classic South Africa certainly lived up to the hype in 2009.

Last year was the first time Cape Town had hosted a surf contest of this magnitude in 25 years. The quality and success of the third stop on the O’Neill Cold Water Classic Series has generated plenty of excitement for its return for 2010.

“It was such a great competition to have in Cape Town last year” said 22 year old South African star Jordy Smith- the current ASP World Rankings leader. “The waves there are pretty wild, and the location is amazing. It is something so different and special to have in my home country.”

The 4 Star ASP competition will not only see Jordy Smith competing, but also new South African surfing talent Casey Grant as well as the likes of the 2010 CWC Scotland winner, Royden Bryson and the 2010 CWC Tasmania winner Stuart Kennedy.

With Royden and Stuart both sharing the lead with equal points for the O’Neill Cold Water Classic Series and the $50,000 prize money that the series winner stands to win, it is guaranteed to be a fierce competition.

But conditions are not going to make it easy. Last year saw one of the biggest storms in the last 20 years hit the Cape Town area during the competition. This year as we head deeper into winter, surfers can expect much of the same and more.

“We're talking peak winter storm conditions, with big storms and often huge surf. There have been some huge 30 foot conditions quite often around this time,” said local forecaster Spike from wavescape.co.za “It is not called the Cape of Storms for nothing, and this is the peak time for it.”

This is known as the “wildest event in professional surfing” after all.

When it comes to the O’Neill Cold Water Classic ethos of finding some of the best waves in the world in wild remote locations in which to stage a world-class competition, the CWC South Africa most certainly lives up to this.

Held on the Cape Peninsula just south of Cape Town, it takes advantage of both sides of the peninsula from the wild and exposed beaches on the west to the perfect reef breaks on the east.

With such stunning coastline every effort is being made to ensure the event has minimal impact of the environment with a comprehensive environmental management plan.

Download the new O'neill Cold Water classis Iphone application
Watch all the daily highlight videos, get all the news and pics from the events as well as local surf conditions straight onto your phone with the new O’Neill CWC iPhone App

Facts and Figures:
FIVE events exploring the edges of the world over four continents.
FIVE challenging, quality waves all in extreme and not to mention cold conditions.
FIVE ASP events in rugged and unique locations in the depths of nature.