ANALYSIS_ Better-than-expected performance of its Directory and namesake brand in the second quarter took Next Plc (NXT.L) to lift its forecast for fiscal 2014 profit and sales growth. The improved forecast got the stock rallying in London. British retailer Next Plc reported Tuesday higher Next Brand sales

in the second quarter, with improved performance in retail and Directory divisions. “Directory sales growth remains stellar,” wrote an Investec analyst in a note to investors. 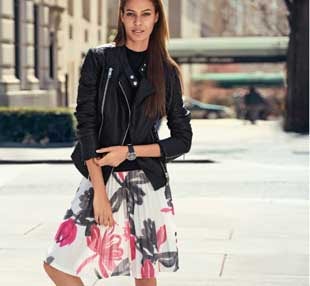 under the Next brand rose 11 percent in the 26 weeks to July 26, ahead of the median of 12 analysts’ estimates compiled by Bloomberg, which was for a 9.6 percent gain. First-half sales at Next’s stores were up 7.5 percent while revenue for its Directory business gained 16 percent, reported the retailer Tuesday.

Based on the figures obtained by the group over the first half of the year, Next expects now full-year pretax profit to be in the range of 775 - 815 million pounds, far ahead of its earlier forecast of 750 million pounds to 790 million pounds. It is worthy a note that the company last raised sales and profit forecasts in April.

"It might appear overly cautious to forecast a full year sales range which is below our current rate of growth. However, last year's first two quarters were hampered by a particularly cold Spring and Easter which presented a soft comparison for this year," the company said in this regard in a statement.

Next sales growth forecast of 7 percent to 10 percent for the year sent its shares up by as much as 3.1 percent in the early morning trading in London. In words of Investec analyst Alistair Davies, the trading update “highlights the strong form the business finds itself in”.

“This is another strong set of results from Next as they continue to positively surprise on both top-line growth and profit,” concurred Jamie Merriman, an analyst at Sanford C. Bernstein.

Next has expanded its online business into 70 countries outside the UK, helping the second biggest UK retailer surpass its main competitor in the local market, Marks & Spencer Group Plc (MKS) in earnings and market value.

On the wake of the news, research analysts at Cantor Fitzgerald Europe boosted their price target on shares of Next plc from 7,200 to 7,400 pence. They currently have a ‘buy’ rating on the stock. As highlighted in an analysis issued Tuesday, their price objective indicates a potential upside of 13.50 percent from the stock’s previous close.

Next shares have been its price lifted by 22 percent this year to date, giving Next a market value of 10.2 billion pounds.

Based on the newly released figures, the apparel retailer also increased its pretax profit guidance by 25 million pounds, while earnings per share growth is now expected to be between 12 and 18 percent, compared to prior guidance of 8 to 14 percent.