Luxury holding group Kering announced its aim to source all its python leather from legal breeding farms by 2016 during the presentation of its first report under the 'Python Conservation Partnership,' a collaboration between the group, the International Trade Center (ITC) and the


Last November, Kering revealed the start of the initiative to help bring around an industry-wide change in the python trade. Illegally traded python skins, predicted to be worth 600 million pounds, are being imported to Europe every year due to lax regulations and an increasing demand for leather skins. Python skins are primarily traded for the fashion industry to make luxury leather products, with Italy, Germany and France being the biggest importers. 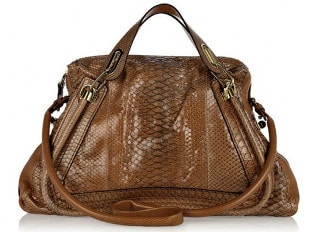 Kering is confronted with the growing demand for python leather, which is being fuelled by its Asian clientèle, but raised concerns around the sustainable sourcing of snake skins and the danger of purchasing illegal python skins. The illicit trade of python skins occurs for the most part in the Southeast of Asia, and the above quota capture of wild pythons is said to be a threat to the preservation of two types of snakes: The Reticulated Python and the Burmese Python. Over the past 20 years the demand for python skin has increased significantly, with 500,000 python skins being exported from Southeast Asian countries per a year, worth 32 to 35 dollars per meter.

According to the report, continued increase in demand for python skins is likely to put significant pressure on the number of wild pythons .“It is is encouraging to finally have some concrete information about the feasibility and role of farming pythons for skins, particularly given the previous concerns raised about whether it was possible or not,” commented Daniel Natusch, one of the authors of the report and member of the IUCN SSC Boa and Python Specialist Group.

“[But] captive breeding is only part of a possible solution for a sustainable python skin trade,” he adds stressing “we shouldn’t lose sight of overall conservation goals and the greater potential of wild harvest systems to encourage conservation of wild pythons and their habitats.” The report recommends introducing systems to document python farming to ensure that the trade become sustainable and legal to discourage the trafficking of wild skins. The report also highlights the need to create a technique to tell the difference between captive-bred and wild-skins.

Kering currently purchases farmed bred python skins as well as wild caught python skins which have been certified under the Convention on international Trade in Endangered Species (CITES) plan from Indonesia, Malaysia and Vietnam. The luxury holding company now promises that from 2016 onwards to only purchase python skins from companies that meet the highest standards and have a positive effect on the species living in the wild.

“Our drive and commitment to sustainable business includes going deep into sustainability across our supply chains, right to our sources,” said Marie-Claire Daveu, chief sustainability officer and head of international institutional affairs of Kering. To continue to meet its increasing demand for python leather, without endangering the species any further, Kering is considering the acquisition of its own farm.

“The python is emblematic to some of our brands, such as Gucci,” adds Daveu. If Kering was to purchase its own python farm it would allow the group the freedom of control over its supply chain and its own stock. Kering would not be the first fashion company to began the captive breeding of its own exotic skins. Hermeś and Louis Vuitton both own a number of alligator and crocodile farms across the US and Australia for their own skins.