Primark's investigation finds distress labels to be 'a hoax'

Primark launched an independent investigation earlier this week after a shopper from Swansea revealed she has purchased a summer dress from the value retailer, with a hand stitched label sewn inside the garment reading: “Forced to work exhausting hours.” After news of the distress

label reached news outlets around the world, another shopper from Swansea came forward and revealed to the South Wales Evening Post that they had purchased a top last year with an extra label stitched in reading: “Degrading sweatshop conditions.” 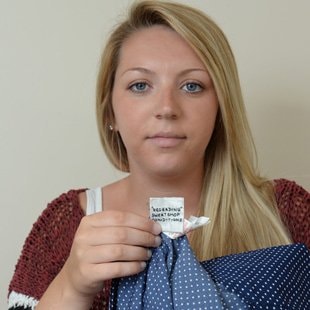 Another shopper from Northern Ireland also claims to have found a distress note calling for help inside a pair of trouser she purchased from Primark in a Belfast store in 2011. The writer of note is claims to be a prisoner in the Xiang Nan prison in the Hubei province, who is forced to work 15 hours a day without adequate food.

“These three-quarter crop trousers were last ordered by Primark in early 2009 and were last sold in Northern Ireland in October 2009,” said Primark to the Guardian. “We find it very strange that this has come to light so recently, given that the trousers were on sale four years ago.”

Primark declares hand stitched labels to be part of 'a hoax'

The Irish fashion retailer issued a press statement today, which highlights its concerns with the growing number of accusations that it sources garments from sweat factories. “Primark would not sell clothes unless we are satisfied that they were made in accordance with our Code of Conduct,” commented the company.

“It is for this reason that we take all allegations of breaches of our Code extremely seriously from any sources. Indeed, we make it easy and accessible for workers in our supply chain to make contact with us confidentially, through a variety of sources, if they have any concerns.”

Primark reveals that its investigation into the distress labels sewn into the two garments purchased separately from its Swansea store, has led them to the conclusion that the labels are “more likely than not, to have been a hoax carried out in the UK.”

Both labels appear to come from the same source, which according to the value fashion retailer, would be virtually impossible seeing as they were both manufactured by different suppliers, in different factories, in different countries. One of the garments was produced in Romania, the other in India which both all thousands of miles apart.

“However, both garments carrying the hoax labels, were bought from our Swansea store in 2013,” adds Primark. “It may be no more than a coincidence that an exhibition of labels of a similar kind was held in Swansea, also in 2013. Visitors were encouraged to sew labels, using similar wording and appearance to the hoax labels, onto clothing.”

The Irish value fashion retailer added that it will continue to investigate the source of the note discovered in the pair of trousers, with ongoing investigations being carried out in China as well as the UK. “We are also investigating whether there may be any link to the hoax Swansea labels,” concluded Primark.