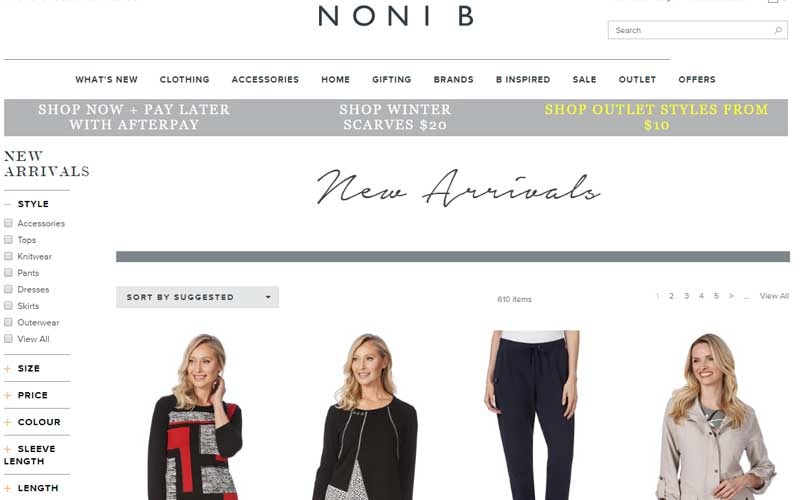 Womenswear retailer The Noni B Limited (ASX: NBL) released a trading update for the 12 months ended July 1 on Thursday, advancing it’s set to achieve a whopping 70 percent rise in earnings by the end of its fiscal year 2018.

Noni B registered total sales of 364 million dollars in FY 2018, a 15 percent increase year on year (FY 2017’s sales came in at 316.8 million dollars.) This rise is explained to great extent by the 4.5 percent jump in like-for-like sales during the period, as well as the expansion of its store network from 614 to 641 stores, and a sizeable increase in online sales, points out James Mickleboro for the ‘Motley Fool’.

As a result of its strong yearly sales growth, Noni B expects earnings before interest, tax, depreciation and amortisation (EBITDA) for its current fiscal year come in at circa 37 million dollars.

“This is consistent with broker expectations and represents growth of over 70 percent on the prior year’s underlying EBITDA of 21.7 million dollars,” writes Mickleboro.

FY2019, a transformational year for Australian retailer Noni B

While presenting the results for 2018, Noni B’s executives described the financial year ahead as a year of transformation for the company. It’s worth recalling that the fashion group has recently completed the acquisition of the Millers, Katies, Crossroads, Autograph and Rivers brands from Specialty Fashion Group. This acquisition more than doubled the group’s footprint.

In a call with analysts, Noni B said they are bucking the trend of retailers lessening their bricks-and-mortar stores by targeting middle aged women who prefer to go shopping in person.

“I think it’s easy to generalise, to say 'everyone is shopping online and therefore people need to reduce their store footprints'," said Noni B chairman Richard Facioni. "In our demographic - which is that more mature female shopper - online penetration has been less, so it’s been a bit more insulated to that. I think it really does depend on the retailer as well," he further added.

The ASX-listed group runs stores under the Noni B, Rockmans, W.Lane and BeMe brands. Its commercial network has grown by 27 to 641 over the last twelve months.

Noni B (ASX:NBL) shares have gained 74 percent in year to date

On the back of the announcement the fashion group’s stock jumped, adding to their 12-month gain of 74 percent.

Noni B is reaping the first fruits of its digital transformation efforts, as online sales now make up 5.8 percent (21.1 million dollars) of total sales compared to 3.6 percent ($11.4 million) in FY 2017.

Progress thus far has been pleasing according to management, and it remains confident that it will deliver on its targets.