An Australian company has come up with an innovative way to make cellulose-based fabrics such as rayon and viscose. Instead of using chemicals to extract cellulose from cotton, trees or bamboo, Nanollose lets a bacteria called Acetobacter Xylinum eat agricultural waste (their initial run used coconut byproducts) and convert its sugars into cellulose.

Not only does this process eliminate the need for arable land, irrigation and pesticides, it is also much more productive than the traditional ways to regenerate cellulose. A cotton plantation the size of a soccer field, for example, would take 6 to 8 months to harvest and yield about half a ton of cellulose pulp. If the same portion of land would be alloted to trees, one would obtain 3.5 tons of cellulose pulp, but they take between 12 and 18 years to grow. Bamboo is harvested much faster, in 3 to 7 years, and yields approximately 12 tons of cellulose pulp. Microbial cellulose outpaces them all, with 115 tons of cellulose pulp obtained every 10 to 15 days.

FashionUnited spoke to Alfie Germano, CEO and Managing Director of Nanollose. Germano has over 30 years of experience in the apparel industry, including Vice President and Director positions at GAP Inc, VF Corporation, Fila and Carter’s. Most of his career was built in Hong Kong, but he relocated to Perth in 2016, the same year Nanollose was founded.

Tell us a little bit about the company’s background story. How did it all begin?

Out technology was actually discovered more than two decades ago, by a scientist named Gary Cass, who’s now one of our non-executive directors. He flooded a vat of wine with oxygen by mistake, and what remained from the spoilt batch was a textile-like substance, after Acetobacter bacteria fed on the wine. Cass spent years contemplating potential uses for the substance until he partnered up with Australian fashion designer Donna Franklin in 2006. Together, they launched the world’s first dress made from wine. In 2014, he showcased another dress made from beer at the World Expo in Milan, for marketing purposes. The rest is history! 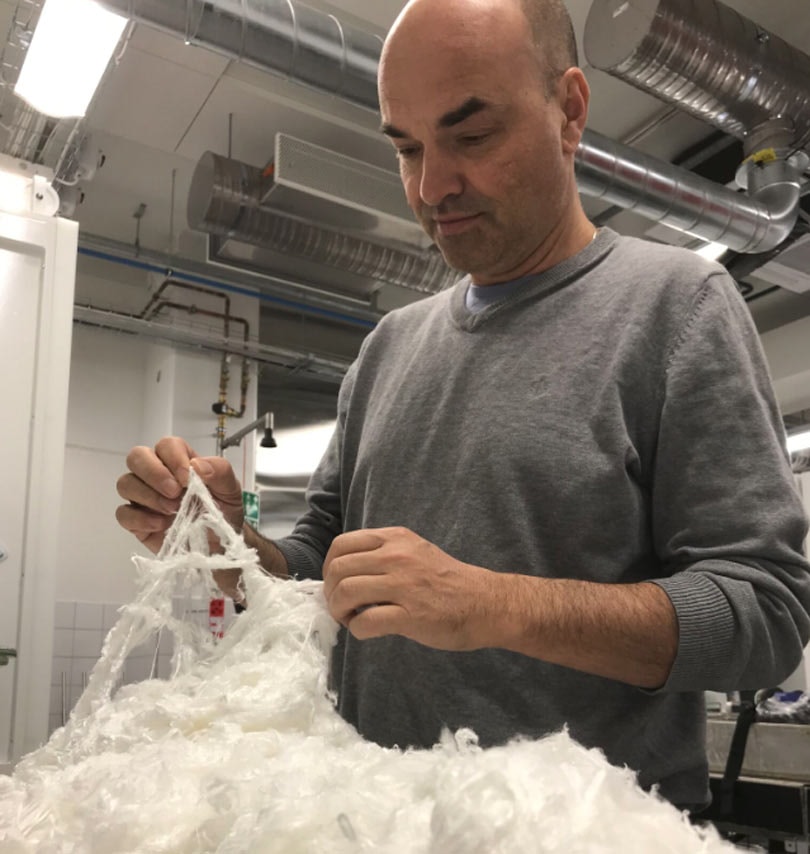 What are the advantages of using microbial cellulose?

Microbial Cellulose is incredibly versatile, needing only a small amount of water to grow through natural fermentation. It does not require sunshine, water, fertilisers or pesticides. The biggest difference between our fiber and the current rayon and viscose plant-based fibers is that no trees are cut down in the production process. It doesn’t require chemical extractions either, so we completely bypass the harmful kraft process*, and in the end we are able to remediate and repurpose waste into a commercial product.

Another advantage is that the technology can be easily implemented into the current textile and clothing manufacturing ecosystem. This is a major advantage, as manufacturers don’t need to change their facilities or invest in further infrastructure if using our fiber.

*Editor’s note: the Kraft process, also known as kraft pulping, consists in chemically converting wood into wood pulp. Wood chips are cooked in a mixture of water, sodium hydroxide and sodium sulfide, which causes the lignin to dissolve and the chips to be converted into pulp. The separation of pulp from ligning is followed by screening, washing, bleaching, pressing and drying. This process is linked to air and water pollution, as current techniques can only reduce the toxicity of the wastewater.

Fabric made with microbial cellulose

Will it soon be possible to scale up the production of microbial cellulose-based fibers?

We are listed on the Australian Stock Exchange (ASX: NC6) so I am unable to share details around this. However, I can say that the company is working towards having a commercial offering in the near future.

What are your other plans for the future?

Almost 10 years after creating the first wine dress, we are now preparing for the commercialisation of the business and aim to make significant progress in penetrating the textile industry over the next 18 months. Our vision is to license and partner with various third parties to manufacture and use our fibre, and we are currently laser focused on building scale around our raw material supply. Once this is achieved we will then solidity some industrial partners. We are also continually refining our fibre technology and looking for other markets and applications for microbial cellulose. Last but not least, we are excited to be an ambassador for industry betterment with our new sustainable products.