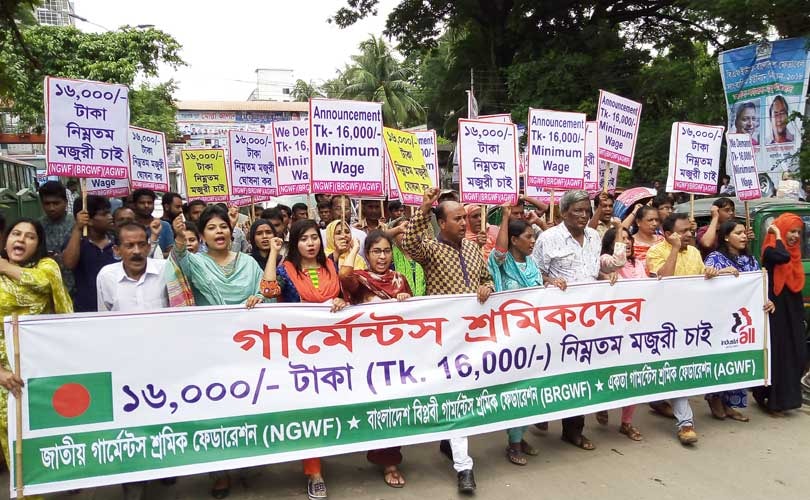 On July 16, 2018, the Bangladesh Garment Manufacturers and Exporters Association (BGMEA) submitted a proposal for the workers’ minimum wage to be set at 6,360 taka (about 75 dollars), which the Clean Clothes Campaign has criticized saying, not only does this amount not meet any living wage standard for Bangladesh, it also does not remedy employers’ disregard for the legally required increases over the past five years.

“We strongly condemn the proposal handed in by the BGMEA as well as the entire wage revision process so far. The proposed “increase” of the basic wage component from 3,000 to 3,600 taka that employers have put forward is nothing but playing catch-up with statutory demands – with a delay that has cost workers hundreds of dollars over the past years,” said Ineke Zeldenrust of Clean Clothes Campaign in a statement.

The current minimum wage of 5,300 taka was set in 2013, and it has ever since been widely criticized as insufficient for workers to meet even their most basic needs. This minimum wage is composed of a basic wage of 3,000 taka, plus allowances for transport, medical expenses and food. According to Clean Clothes Campaign, the 2013 Labour Amendment Act requires for the basic wage component to be increased by five percent every year, however, garment workers have reported that they have been deprived of this annual increase ever since the current minimum wage was implemented.

According to the organisation, a workers’ representative – who had been appointed to the Minimum Wage Board by the government – handed in a proposal to raise the wage to 12,020 taka and this proposal is contravening the broad consensus among trade unions and their federations, including IndustriALL: which proposed the new minimum wage at 16,000 taka.

In a letter sent in April to major brands sourcing from Bangladesh Clean Clothes Campaign requested that brands demonstrate leadership on the way to a living wage by publicly: supporting workers’ demand for the 16,000 taka minimum wage; making a long-term commitment to continue sourcing from Bangladesh after the wage increase. So far several brands have expressed their general support for a wage increase, but they have not meaningfully acted upon this by taking the requested steps.

“If brands truly want to support the genuine and fair engagement of workers in the negotiation process, they will speak out now. Silence means inaction,” added Zeldenrust, and pointed out that, “We once again call upon all brands sourcing from Bangladesh to live up to their own proclaimed standards and to take action before the Minimum Wage Board meets again at the end of August.”