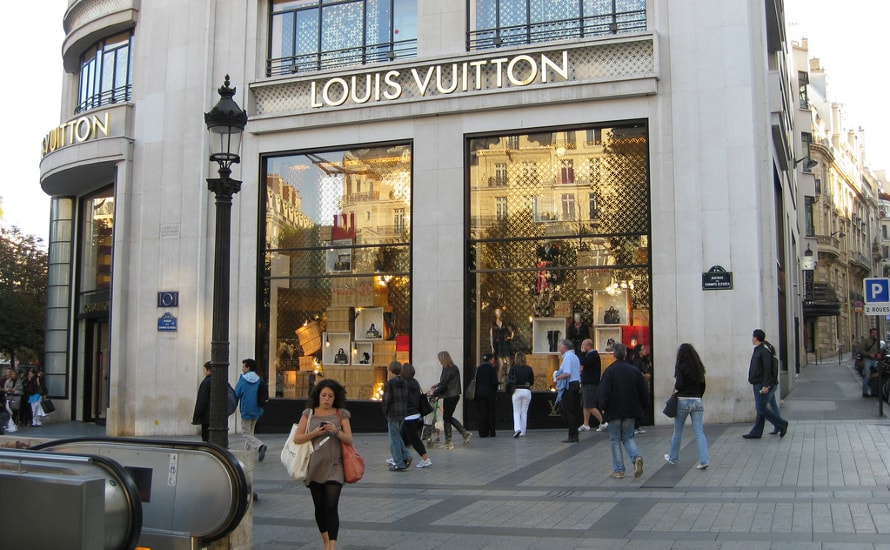 From Brexit to ‘Amazonisation’, what lies behind EU retail sales roller coaster

Over the first nine months of fiscal 2016, fashion and apparel retailers in Europe have been fighting many battles in order to turn their retail sales into if not successful, at least sustainable story. FashionUnited has looked under the curtain to find out what lies behind the generalised nosedive of sales in the retail channel.

Aimed at outlining the reasons for the European apparel sector’s ailment, FashionUnited Business Intelligence has analysed the evolution of retail sale of textiles, clothing, footwear and leather goods in specialised stores over the first three quarters of 2016 and compared these data against that of the same period of 2015.

Retailers in France, Belgium and the UK, badly hit by effects of terrorism and Brexit

Even if the aggregated balance of retail sales at specialised stores across the 28 countries that conform the European Union threw a slight slip (-0.2), retailers based in countries such as France, Belgium and the UK have been clearly hit, suffering deeper losses than their peers operating in other European markets.

FashionUnited Business Intelligence has looked into the possible reasons behind such a steep decline, finding out that hiking unemployment rates in France, the aftermaths of terrorist attacks in 2015 in France as well as in Belgium, and the uncertainty generated by the impending UK’s exit from the European Union have been the main factors affecting apparel retailer’s top line growth.

“Terrorism is active on Europe’s shores, with major atrocities having already taken place in luxury shopping hot spots like Paris and the Cotes d ’Azure,” Fflur Roberts, head of luxury goods at Euromonitor International told the ‘Observer’ in an interview.

ForwardKeys explained earlier last year then that Europe was the only region of the world to receive fewer international bookings in 2016 than in 2015, with a decline of 2.1 percent from the previous summer. 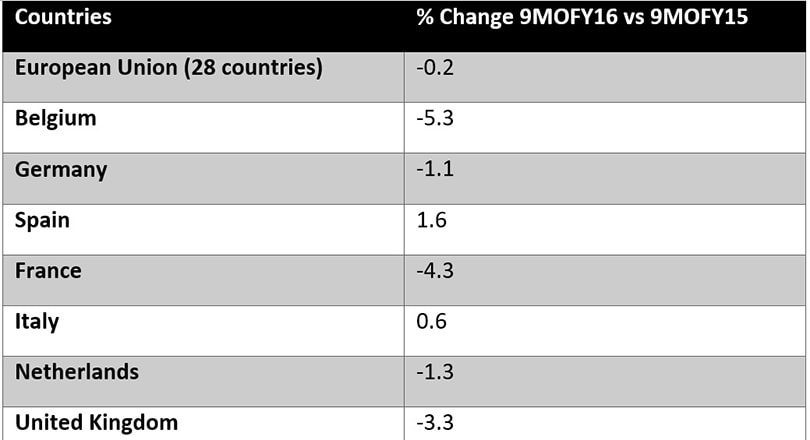 Luxury retailers stood out as the main losers, as the overall downturn in luxury sales over the past year is forcing many top brands to re-think their strategies. In summer 2016 Prada reported its first major decline in opening-half sales since 2011, citing terrorism as one of the main culprits. Hermes and Louis Vuitton followed suit also reporting weakening sales over the same period.

“The European transport and tourism infrastructure has also been a key target for bombings and attacks. Such events have an immediate impact on tourism and subsequently on luxury spending, with short, sharp declines felt in the aftermath,” further stressed Roberts.

Confirming this trend, data gathered by FashionUnited shows Belgium as the main underdog, with retail sales of clothes, footwear, textiles and leather goods losing 5.5 percent over the first nine months of 2016 in comparison to the same period the previous year. The terrorist attacks perpetrated in March at Brussels’s airport and underground by the Islamic State meant a nearly 1 million euro loss in business and tax revenue for the country, which tourism levels have yet to recover. Following these attacks. International bookings to Belgium declined by 23 percent, said Euromonitor.

Meanwhile, neighbouring France didn’t fare any better, also being hit by a series of terrorist attacks in Paris, Rouen and Nice which prompted an 11 percent decline in international bookings. Additionally, skyrocketing unemployment rate in France (+10.8 percent) took a hit on wary consumers, dragging apparel retail sales down by 4.3 percent over the first nine months of 2016.

Is it Brexit or shall we blame it on Amazon?

With a 3.1 percent decline in retail sales for the period analysed, the UK comes third in the losers group. In the immediate aftermath of the Brexit vote, political uncertainty led to a severe decrease in consumer confidence and therefore affecting retail sales. Even if many British brands – from ASOS to Burberry –have benefited from a cheaper Sterling, these gains have not being passed to British shoppers, who have found themselves with a lesser purchase power as the pound grew devaluated.

However, Brexit might not be the only reason for the British high street’s struggles. Many analysts point out that there is a growing shift in shoppers’ preferences towards online shopping, triggered by a greater deal of convenience and better prices and championed by the omnipresent Amazon.

Overall web sales in Europe reached 455.30 billion euro, up by 13.3 percent from 401.85 billion euros, according to E-commerce Europe. The United Kingdom leads the way with 81 percent of individuals buying online in 2015. Furthermore, between 10 and 12 percent of total retail sales in the country happened online, according to ‘Forbes’.

The so-called ‘Amazon Effect’ sees the ecommerce behemoth eating up sales of apparel, home goods, and other staple items of the traditional department store.