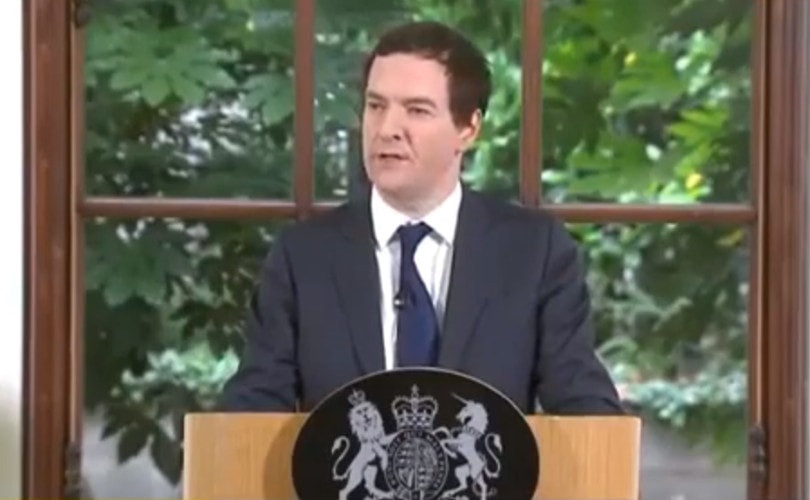 Chancellor George Osborne has made his first public appearance since the Brexit vote to declare that the British economy is “fundamentally strong” and “open for a business” in an attempt to calm global financial markets.

“Britain is ready to confront what the future holds for us from a position of strength,” said Osbourne in a statement from the Treasury. “Britain has the strongest major advanced economy in the world. Growth has been robust. The employment rate is at a record high. Our economy is about as strong as it could be to confront the challenge the country now faces."

The Chancellor of the Exchequer, who campaigned for Remain, added: “This is not the outcome that I wanted or that I threw everything into campaigning for. But Parliament agreed that there are issues of such constitutional significance that they cannot solely be left to politicians, and must be determined by the people in a referendum.

“Now the people have spoken and we, in this democracy, must all accept that result and deliver on their instructions.”

Following the UK vote to the leave the European Union on June 23, he stressed that Britain’s economy was “going to have to adjust to the new situation we find ourselves in”, and that analysis from the Treasury and other independent organisations had identified three particular challenges.

The first being the volatility in the financial markets, which he said the Treasury, the Bank of England, and the Financial Conduct Authority had spent the last few months putting in place “robust contingency plans,” including arranging swap lines in advance so that the Bank of England is now able to lend in foreign currency if needed.

In addition, the Bank of England also stands ready to provide 250 billion pounds of funds, through its normal facilities, to continue to support banks and the smooth functioning of markets.

The second he noted was the “uncertainty” that a vote to leave brings, however, he adds that with the Prime Minister delaying the decision to trigger the Article 50 procedure until there is a new Prime Minister in place for the autumn, leaves more time, which he adds should only be done “when there is a clear view about what new arrangement we are seeking with our European neighbours”.

The third challenge is ensuring that Britain is able to agree a long-term economic relationship with the rest of Europe that provides the best possible terms of trade in goods and services, which he said he would “play an active part in that debate” to help Britain put in place the “strongest possible economic links” with Europe, the US, the Commonwealth, and “important partners” like China and India.

Osbourne concluded: “It will not be plain sailing in the days ahead. But let me be clear. You should not underestimate our resolve. We were prepared for the unexpected. We are equipped for whatever happens.”