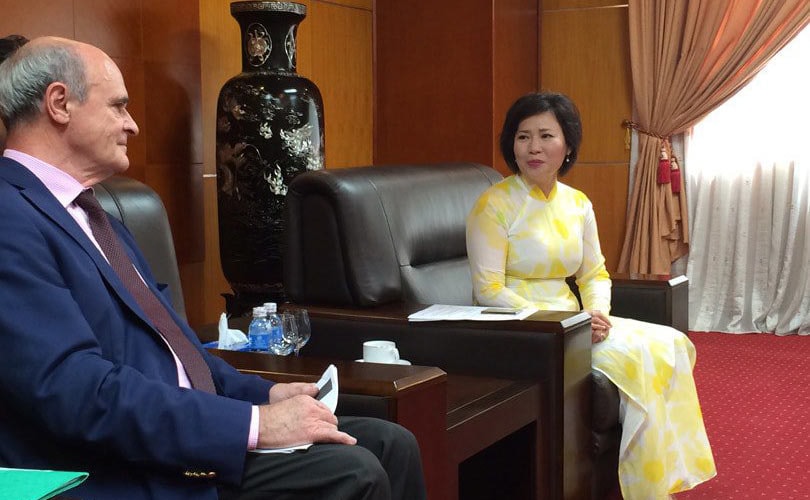 Jean-François Limantour: “The EU favors Asian countries over the Maghreb”

With a resumé that includes experience as General Representative, both at the French Union of the Fashion and Apparel Industries and the European Association of the Apparel Industry, Jean-François Limantour has been an eye-witness to many geopolitical changes that have transformed the sector.

During an in person interview with FashionUnited, he shared his views regarding the future of the clothing and textiles industry.

What projects are you currently working on today?

I am the Director of Texas Consulting, an international development strategy consultancy firm for the textile, fashion and luxury industries. I am also the chairman of two associations: Evalliance and Euro-Mediterranean Society of Directors of Clothing and Textiles. The purpose of both these organisations is to promote cooperation between the European Union with Mediterranean countries (EUro-Mediterranean) and Asia (Evalliance), in particular the Indochinese peninsula (Vietnam, Cambodia, Myanmar) as well as India, China and Bangladesh. These associations bring together industrial companies, distributors, trainers, designers, technology firms, and exhibition organisers among other relevant professions.

I am also strategic adviser to Messe Frankfurt France, the organiser of the Texworld, Apparel Sourcing and Avantex exhibitions. Finally, I work as Strategic Adviser for the Moroccan Association for the Textile and Clothing Industries. 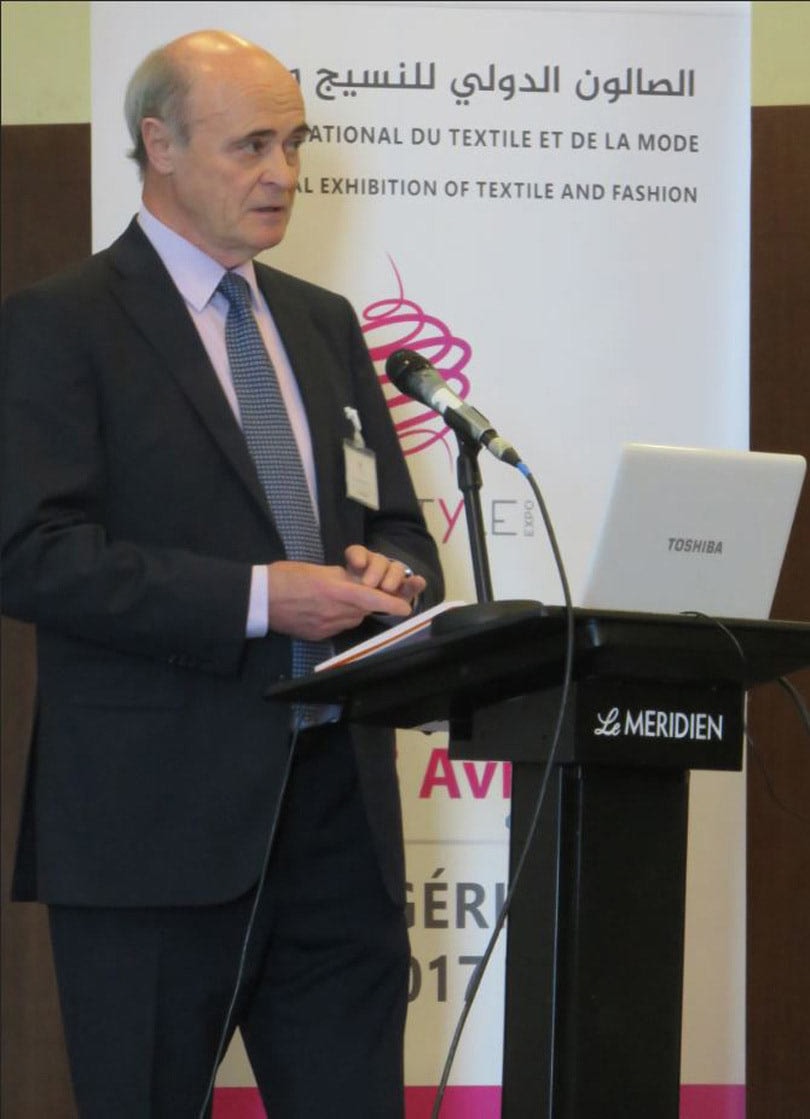 How is the clothing and textile industry faring in the Mediterranean region?

Let’s look more closely at the case of Turkey, Morocco and Tunisia.Turkey is the 3rd largest clothing supplier to the European Union after China and Bangladesh, and has seen its share in European imports fall from 15.3 percent in 2007 to 11.5 percent in 2017. Turkey’s decline, apparent since 2015, is due to a loss of competition caused by a substantial increase in costs. This situation had led to strained relations with the EU, particularly with Germany, which is Turkey's main European client. But because of its customs union with the EU and the strong depreciation of the Turkish Lira, it remains a very interesting country as a clothing source for Europeans. It is the 2nd supplier to the EU in jeans, T-shirts, skirts and men’s jackets; the 3rd in trousers, pullovers, shirts and blouses. However, it is less popular in terms of lingerie, swimwear and professional clothing.

Morocco is the 8th largest clothing supplier to the European Union. With the dismantling of the Multi-Fibre Agreement (MFA) quotas, the country has suffered with fierce competition coming from Asia. Luckily, the sector rediscovered the path to strong growth and has began regaining its market share in 2013, unlike many other Mediterranean suppliers.

Morocco is therefore reaping the fruits of a dynamic industrial and commercial policy, supported by law-makers in the country and aimed at making the industry a worldwide champion fast-fashion.

Tunisia is the 9th on the list of biggest suppliers to the EU. However, it is currently suffering from a two setbacks: first, the dismantling of the Multi-Fibre Agreement (MFA) in 2005 and other problems – economic, social and political – that arose, leading to the Jasmine Revolution. Its share of clothing imports to the European Union was 4.4 percent ten years ago, now only 2.4 percent. 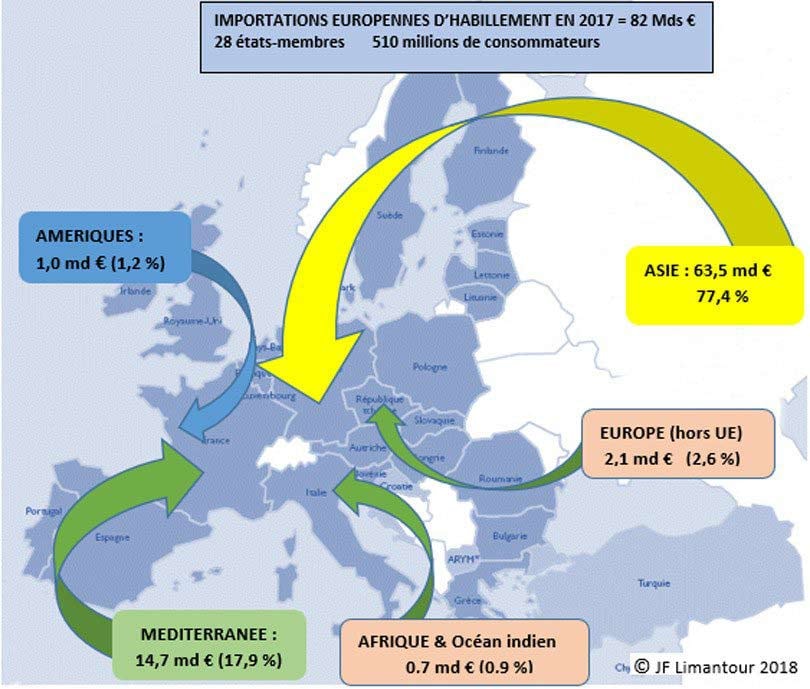 However, one can expect the sector to recover in the short-term considering that the socio-political situation in Tunisia is improving drawing the eye of significant European investors to the country.

What about the other Mediterranean countries?

Egypt is the 17th largest supplier of clothing to the EU with a share of 0.5 percent. Its clothing and textile industry benefits from substantial advantages: low salaries, cotton, and energy exports, mainly to the USA. Egypt is a member of the Qualifying Industrial Zones Agreement (QIZ) alongside Israel and Jordan, which allows them to export to the USA without any tariffs.

Jordan is the 44th biggest supplier to the European Union, as well as an important supplier of clothing to the US under the QIZ Agreement (1.36 billion US dollars in 2017). The Jordanian clothing and textiles sector comprises 1,200 companies and 80,000 employees.

Lots of talking! The Maghreb countries think that the European Union treats them as less important than Asian countries. Rightfully so. For example, the European Commission still refuses to grant them the same relaxed customs regulations enjoyed by Bangladesh, Cambodia and Myanmar.

How is the clothing and textile sector faring in Asia?

Overall very well! Asia is progressing from year to year and is supplying more than three quarters of all EU clothing imports. This mainly involves China, Bangladesh, India, Cambodia, Vietnam and Pakistan. Compared to the Maghreb, their results are range widely.

China supplies one third of all EU clothing imports, a 2 percent decrease in comparison with 2017. However, China’s clothing and textiles sector is not in decline, quite the opposite: it is reinforcing its control of the international market both in the industrial and commercial domains. The Chinese strategy consists of moving a portion of its production to low-cost countries which have preferential customs agreements with the EU: Vietnam, Cambodia, Myanmar, Bangladesh,Ethiopia, Egypt etc.

China also stands out commercially, by purchasing prominent brands and international distributors, as well as by developing distribution centers elsewhere -- there is one in Marseille, France, for example.

As for the other large Asian suppliers, their performance is varied. The countries which are bound to the EU under preferential agreements such as Generalised Scheme of Preferences (GSP), Generalised Scheme of Preferences Plus (GSP+), and Everything but Arms are continuing to grow fast. Bangladesh, Cambodia, Vietnam, Pakistan, Sri Lanka, Myanmar are an example of some of those countries. On the other hand there are countries which do not benefit from any agreements with the EU which are stagnating or in decline. That’s the case with India, Indonesia, Thailand, Hong Kong, Malaysia, the Philippines. 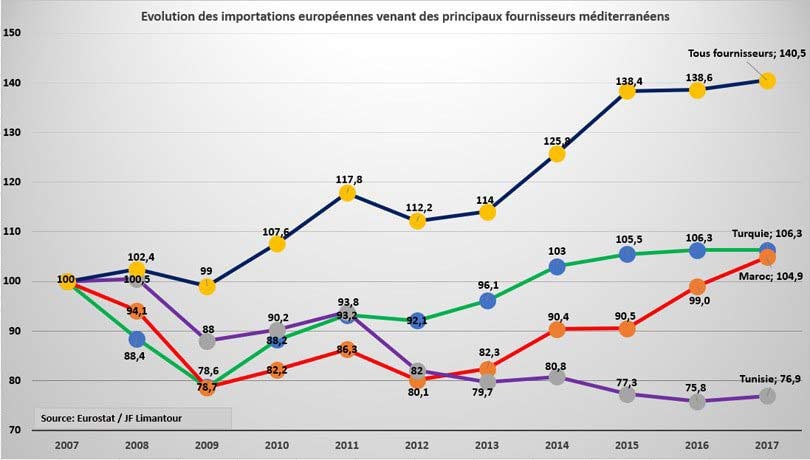 What can the European Union do to strengthen its collaboration with that region?

EU’s commercial policy towards Asia consists on granting special tariffs to many Asian countries, with the aim to accelerate their development. They have implemented free-trade agreements with Vietnam, for example. In some countries including Pakistan or Sri Lanka, the EU granted Generalised Schemes of Preferences Plus (GSP+), which allow selected countries to export to the EU without any tariffs.

In other cases including Bangladesh, Cambodia and Myanmar, the EU grants the Everything but Arms regime, which grants ability export clothing to Europe without tariffs, regardless of the origin of the fabrics; this is an enormous competitive advantage!

In return, those countries must pledge to respect human rights.

What have you managed to accomplish at Evalliance? What are your future projects?

Evalliance is a young organisation which I founded in 2013. Its activities include lobbying, market studies, missions, professional training (productivity, fashion marketing, sourcing, management), economic intelligence, the organisation of Business-To-Business strategies, and international partnerships. We work as a network and have established partnership agreements with the French and European Chambers of Commerce, as well as with professional organisations in Asia (Cambodia, Vietnam, Myanmar). We have offices in Phnom Penh and Rangoon and branches in various European countries, including China and in the United States.

We also have three former ambassadors on our Board of Directors which gives us a strong political influence. Our various short-term projects include the creation of a fashion institute in Cambodia, which was based on finding from a study designed to find the professional training needs most prevalent in that country.

Which country has the potential to be “the next big thing” in terms of exchanges with the EU? What are the determining factors now?

There has been a lot of talk about Ethiopia as the future supplier of the world. The minimum monthly salary there is only 36 US dollars compared to 64 US dollars in Bangladesh, 77 US dollars in Myanmar and 170 US dollars in Cambodia. It is also true that Chinese and Turkish investors are also active there. However, at the current moment Ethiopia only supplies 0.5 percent of European clothing imports.

There have also been a lot of buzz about Macedonia, but its performance is actually disappointing. If I had to pick a third winner in the short term, I would make it Vietnam, Cambodia, Morocco or China. For the latter, the Silk Road is going to be an important catalyst for exports.

The reputation of textile and clothing is industry is tarnished, due to security problems in Bangladesh and Tunisia. What are these countries doing to reassure investors?

In recent years, security problems, in particular terrorism, have affected international clothing and textile trade between the European Union and sourcing countries such as Tunisia, Turkey and Bangladesh.

I would emphasise, however, that failure to respect human rights issues have also come from European importers of goods from these countries. I am thinking of Bangladesh in particular. The situation there hasn’t changed much since the collapse of Rana Plaza in Dhaka, in April 2013, which killed 1,127 people. Conditions are still unacceptable and antiquated in general, despite the efforts from big western trade names and the International Labour Organisation.

One can also mention the drama of the Rohingyas in Myanmar, or Syrian refugee children working in Turkish workshops.

It should come as no surprise that the public image of the sector is not good. Business is recovering, even in the countries that came under the most criticism, however the European Union continues to grant them substantial advantages!

How are firms dealing with 4th Industrial Revolution? Will Fashion 4.0 be a competition lever for fast fashion?

It is clear that Industry 4.0 is going to cause a major transformation in the way industrial suppliers and distributors operate. The vertical organisation of labour in manufacturing workshops will gradually be replaced by collaborative labour. Robots and artificial intelligence are already a reality in the workplace.Coupled with artificial intelligence, they can sew T-shirts on their own, and they can deliver both in terms of productivity and quality. We’re also starting to see companies manufacturing clothing by using 3D printers. Individual distribution with the help of drones is no longer a fantasy.Businesses will be hyper-connected and able to produce personalized clothing on demand.

The sector has already understood that this increased competitiveness is great, both in the industrial and commercial sense. For example, Lectra, the world’s number one company in Computer Assisted Design (CAD), is proposing a 4.0 offer that is extremely attractive.

For the European and Mediterranean industries, the challenges are considerable; it’s an existential challenge! The digital revolution could be a formidable opportunity to re-conquer markets, or even to relocate the textile-clothing industry to Europe. They should beware, however, for China and other Asian countries have also noticed these trends and they are investing in the 4.0 economy too.

This article was originally published at FashionUnited.fr.