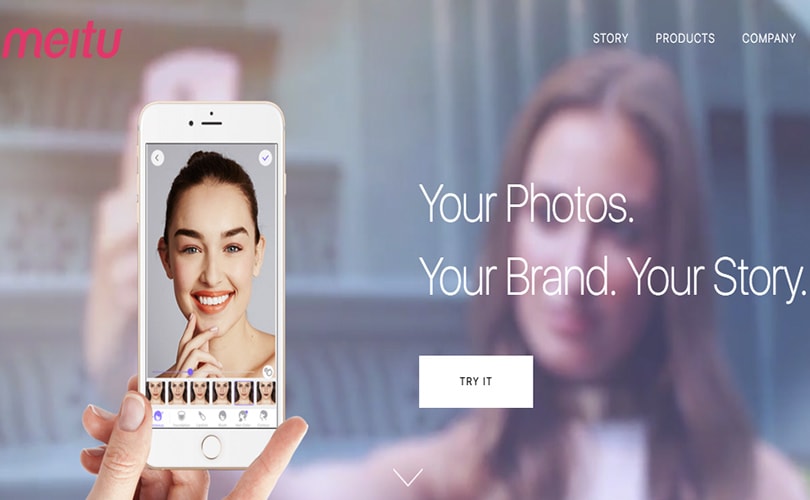 Strolling a tree-lined Shanghai street with friends, Hu Dongyuan pulls out her smartphone and does what millions of Chinese women do daily: take a selfie, digitally "beautify" their faces, and pop it on social media.

Such virtual makeovers, typically involving lightening skin, smoothing out complexions and rounding the eyes, have propelled selfie-editing app Meitu to the top ranks of China downloads. With more than 450 million active China users, Meitu is now also gaining traction abroad, using its more advanced features to challenge Instagram and Snapchat, which depend largely on filters and stickers.

China has a world-leading 700 million mobile-Internet users, vast numbers of whom use such apps to fuss over their digital appearance. "It's the same as with clothing and makeup. They are all ways for people to better present themselves," said Hu, a travel agency employee, who likens Meitu to a cheap, non-permanent form of cosmetic surgery.

She added: "Everyone uses it as a kind of personal advertisement." Meitu, which means "pretty picture", launched a Hong Kong IPO in December that valued the company at 4.6 billion dollars at the time, despite consistently posting losses.

It was Hong Kong's biggest tech IPO in nearly a decade. Analysts call Meitu a potential test case of the global potential of Chinese apps, particularly those aimed at women, a powerful consumer force.

"(Meitu) has really appealed to the beauty concept of China's post-95s," said William Chou, an internet analyst for Deloitte China, referring to those born after that year. "Photo-sharing is a global phenomenon but China has climbed to the top of the world in this," he added. The selfie-editing craze highlights how Chinese lives are increasingly lived online, making a person's virtual appearance as important as their real one, said psychology professor Yu Feng of Xi'an Jiaotong University.

"Modern society has turned face-to-face communication into mostly internet communication," Yu said, and Chinese millennials are seizing the chance "to control themselves and their world". Meitu and domestic competitors like Camera 360 and Poco shrewdly cater to Chinese beauty preferences for lighter skin and rounder eyes -- key features allow easy modification of such attributes on screen.

Founded in the eastern city of Xiamen, Meitu initially provided photo-editing software for PCs, introducing its first selfie app in 2013. Its IPO prospectus said Meitu apps process half of the pictures posted on Chinese social media and were used to alter around six billion photos last October.

Its half-dozen applications, including one for altering video, are regularly among the top photo-app downloads in countries as diverse as China, Russia, Japan, India and Malaysia.

Chinese internet giants like Tencent and Alibaba have struggled to replicate their domestic dominance overseas. But Meitu said it had 430 million overseas users as of October last year, compared to around 500 million claimed by Instagram. Yet profits remain elusive. Meitu lost 2.2 billion yuan (320 million dollars) in the first half of last year.

"Meitu's big problem has always been that it came up with this killer app -- and the usage is unbelievable. It's crazy. But they never had a clear business model underneath it," said Jeffrey Towson, professor of investment at Peking University. Meitu did not respond to requests for comment. Hungry for revenues, it launched its own phones designed for selfie-taking in 2013.

It sold just 646,446 in the first 10 months of last year, however, a tiny amount in China's massive market. Phone sales nevertheless still make up more than 95 percent of Meitu revenue. It now promises to build an online "ecosystem" of apps and devices based on selfie-processing, which could include selling advertising space -- as Instagram does --and launching a fashion-focused e-commerce platform.

"Our mission is to make the world more beautiful. Our wish is to build a beauty ecosystem," the IPO prospectus said. Its shares have risen 16 percent since they debuted, closing Tuesday at 9.86 HK dollars. Deloitte's Chou said investors were ignoring Meitu's current losses in hopes it can pull off the planned business makeover. He explained: "For tech companies, the future is more important than the past." (AFP)