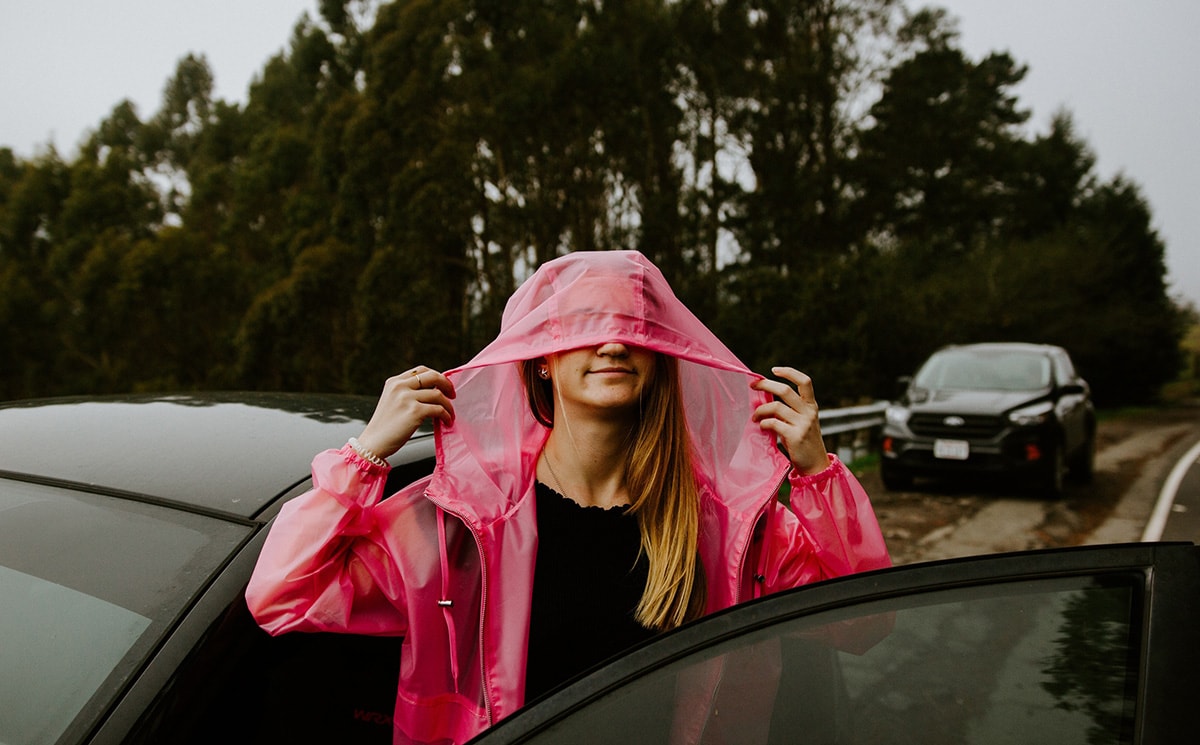 Should the fashion industry ban PFAS?

Is your favourite raincoat, hiking boots or period underwear causing you more harm than good?

When we get dressed in the morning, we usually don’t think about what chemicals are lurking in our clothing. But there’s a potentially harmful group of chemicals present in everything we use daily - from our waterproof jackets to our food wrappers and non-stick frying pans, namely PFAS.

Short for per- and poly-fluoroalkyl substances, PFAS are a large group of synthetic chemicals which contain carbon-fluorine bonds, some the strongest chemical bonds found in organic chemistry. And just like Covid-19, they have been spreading at an alarming rate. They’re found in everything from our drinking water to our soil, our food and even our blood. PFAS are so widespread that an international group of scientists backed by the REACH Regulation (which aims to protect consumers and the environment through early and improved identification of chemicals) are calling for a restriction proposal of the production and use of all PFAS in the EU.

However, getting rid of PFAS is much easier said than done. This group of some 5,000 chemicals is used by a number of industries from food to fashion, cosmetics and agriculture. Invented in the 1950s, PFAS are blended into a variety of materials and textiles to create a protective sealant or resistant layer. Incredibly durable, they are used by outdoor and apparel brands to ensure that your jacket keeps you dry, and your shoes do not get dirty. Brands ranging from The North Face to Patagonia and Wolverine use PFAS in their Durable Water Repellent (DWR) treatment to prevent surface saturation on their outdoor apparel and footwear.

However, because PFAS are so long-lasting, they resist degradation and accumulate with time. A single carbon-fluorine bond is so strong it cannot simply be pulled apart - it’s like sticking two Lego blocks together with superglue. “Once PFAS are emitted, either during production, product use or disposal, it is very difficult to remove them from the environment,” explains Steffen Schellenberger, PhD Materials and Production Researcher at RISE (Research Institutes of Sweden) to FashionUnited. “Since they have spread across the whole planet, you can find them everywhere - even in very remote regions.”

‘Forever chemicals’ in everything from your raincoat to your blood

Levels of PFAS have been found in groundwater and soil around the world, from the US to the UK and the Netherlands, earning them the nickname ‘forever chemicals’. What’s more, PFAS are believed to be found in the bloodstreams of nearly every living being on the planet. Where scientists have tested for the presence of PFAS they’ve found it - in the blood or vital organs of everything from humans, to salmon and Alaskan polar bears. In the past, studies have shown that several of the longer-chain PFAS, known as perfluorooctanoic acid (PFOA), can act as Endocrine-disrupting compounds and interfere with the natural hormones in our bodies, causing a range of health issues such as type two diabetes, immune disorders and poor cardiovascular health.

More worryingly, some PFOA are also known to be cancerogenic, as found in a large-scale study conducted in Ohio, the US, among residents and employees of a plant from chemical manufacturer DuPont. The study, which arose following the 2001 class-action lawsuit that was the basis for the 2019 movie ‘Dark Waters’, showed there was a ‘plausible link’ between long-term exposure to these chemicals and an increased risk of several types of cancer, including testicular and kidney. The higher the level of PFAS, the larger the risk of developing these issues becomes.

Sadly some of the “world’s highest levels” of PFAS were found in the groundwater at a Chinese factory producing PFAS compounds for textile production. Recent research from Norwegian NGO Future in Our Hands highlighted the devastating impact that exposure to high levels of PFOA has on the health of factory workers who produce textiles for western markets. Factory workers and residents in the area of factories suffered from reduced lung capacity, hormone issues and more after being exposed to PFOA through the soil, water and workplace. Considering the environmental and health issues linked to PFAS, it’s hard to understand why they are still so widely used in the fashion industry. But a backlash concerning the use of PFAS could be underway.

Earlier this year underwear start-up Thinx came under fire after it was accused of using PFAS in their products following an independent test by the Sierra Club. CEO Maria Molland denied the claim and offered different, third-party test results to support their claims, but their brand image still took a hit. Increasing awareness concerning the risks and issues posed by PFAS has seen many apparel brands and outdoor brands like The North Face and Patagonia pledge to phase out PFAS from their collections, for safer, non-fluorinated alternatives. Other fashion brands, like Swedish giant H&M, have taken things even further by joining forces with NGO ChemSec to call for an end of the use of PFAS in the fashion industry.

An alternative to PFAS in fashion?

“We’ve been making the transition to a non-PFAS DWR for a few seasons now, and are dedicated to advancing our non-PFAS apparel commitment for all our pinnacle products,” says Jack Ibbetson, PR Manager, EMEA for the North Face, adding this has been “a challenge for the outdoor industry overall.” A positive step from the industry, considering PFOA and PFOA-related compounds have been banned in the EU since July 4, 2020, while short-chain PFAS, known as perfluorooctane sulfonates (perfluorooctane sulfonic acid) (PFOS,) have been restricted for over ten years. Overseas in the US, both PFOS and PFOA have largely been phased out under a voluntary agreement between eight major chemical manufacturers, including DuPont. However, these compounds are still circulating throughout the country via imports, together with the newer, non-fluorinated and non-fluorocarbon-based alternatives being used by brands.

Part of the reason some brands have not become 100 percent PFAS free is linked to the lack of properties offered by some of the non-fluorinated DWR alternatives - especially when it comes to textiles and fabrics. Although there are several non-fluorinated compounds on the market, most only offer one property, such as water repellency, but not stain repellency. For many outdoor brands having water, dirt and oil repellent or resistant apparel is a crucial selling part of their collections. Today, many brands advertise their PFAS free products with a separate tag, but there is no industry-wide certification or label yet.

Transitioning out all long-chain PFAS from the fashion industry

Another issue with some non-fluorinated DWR alternatives is that they can decrease the life-span of products. “They reduce the durability of the materials,” says Schellenberger, as they are based on a different type of chemical compounds such as paraffin, silicone, or polyurethane. For brands like Patagonia, The North Face and Columbia, who pride themselves on creating long-lasting, durable outdoor apparel, this is not an ideal option. To date, the unique properties and performance level achieved by using PFAS on textiles has yet to be matched by a non-fluorinated or non-fluorocarbon-based alternative.

Both The North Face and Patagonia have transitioned all long-chain PFAS in their outdoor and apparel products to short-chain PFAS, and have been careful to avoid “regrettable substitutions.” But some of these alternatives, such as GenX, are possibly just as harmful as their original counterparts. “Short-chain PFAS, like PFHxA, PFHxS or PFBA, are persistent and potentially harmful to human health as well,” points out Manfred Santen, Detox Campaigner for Greenpeace Germany. The Detox campaign, started by the NGO several years ago, has been working with over 80 fashion brands around the world to minimise the use of hazardous chemicals in the industry. But there is still much to be done when it comes to PFAS. Studies in the EU found PFOS also pose a risk to humans, despite remaining in our blood for a shorter amount of time.

Are short-chain PFAS any safer?

In addition to the potential health issues, larger amounts of PFOS are needed to create the desired effect. “When the fashion industry started to replace long-chain PFAS with short-chain PFAS, it turned out that often a larger amount of these chemicals was needed to achieve the wanted results,” adds Santen. Other non-fluorinated alternatives can also pose a risk. “Some non-fluorinated DWRs, for example, those based on silicon polymers can release problematic substances into the environment as well,” stresses Schellenberger. “The fate of (DWR) chemicals in the environment is very complex. Substances might be biodegradable, but can form toxic intermediates in the degradation process.”

Unfortunately, there seems to be no clear cut solution when it comes to the use of PFAS in the fashion industry. Many scientists argue that PFAS are most dangerous when consumed in food or drink, or breathed in and that the levels of PFAS present in items like raincoats and shoes do not pose an immediate threat. But PFAS are slowly released into the environment during the use, washing and disposal of our clothing, which in turn adds to the accumulation of PFAS in the environment. As more studies continue to emerge surrounding the dangers linked to continual exposure and build-up of PFAS, such as a larger risk of getting very ill from Covid-19, stricter regulations concerning this group of chemicals may be implemented much sooner than later.

This article was written by Vivian Hendriksz. Research and interviews by Marjorie van Elven.

Photo by Gabe Pierce via Unsplash