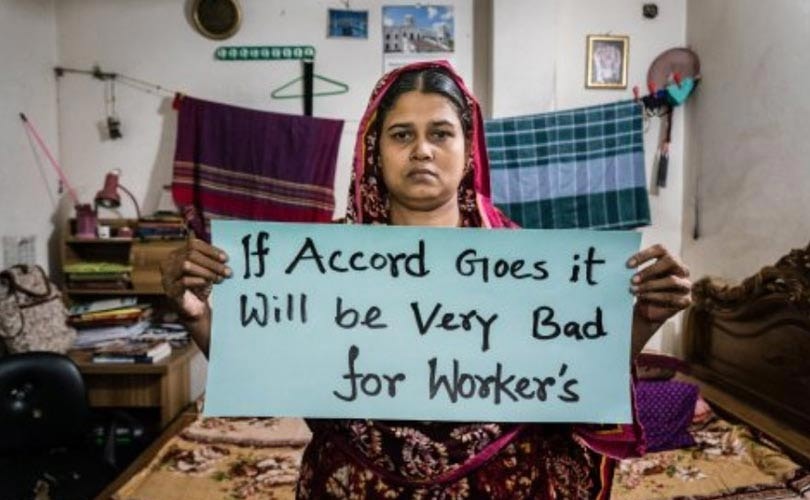 Update: What is happening with the Bangladesh Accord?

At the beginning of the year, international brands were urged to join the new Transition Accord 2018, the successor of the Accord on Fire and Building Safety in Bangladesh, which has run out after its five-year duration in May of this year. The new Accord was to guarantee a smooth transition. However, in the meantime, the government of Bangladesh managed a restraining order on the Accord by the Bangladesh High Court, which was due to take effect on 30th November.

During a hearing on that day, the High Court scheduled a new hearing for Thursday, 6th December, and has lifted the restraining order until that date. The hearing took place amidst mounting international pressure and calls from the international community for the permanent removal of the order as an expulsion of the Bangladesh Accord would have grave consequences for the workers and not only the garment industry in Bangladesh but worldwide. What caused the move by the Bangladeshi government was a recent announcement by the Accord that around 500 factories would not be able receive further orders as their remediation efforts had not been fulfilled. This number was too high for the government. “We cannot accept this,” lamented minister of commerce and industries Tofail Ahmed. “We do not need Accord and Alliance any more,” he said, adding that the country would be well capable to conduct inspections on its own.

Can Bangladesh’s RCC replace the Accord?

Sadly, this seems to be wishful thinking for now. The government’s plan is for Bangladesh’s national regulatory apparatus - the Remediation and Coordination Cell (RCC) - to take over the responsibilities of the Accord’s inspection program. However, according to observers around the world, “all evidence points to a lack of readiness, including a recent report by the Bangladesh Sustainability Compact - a cooperation agreement between Bangladesh, the European Union, the United States, Canada, Bangladesh and the International Labor Organization - which shows that the national inspectorate fails to act transparently and has only one third the amount of inspectors to monitor twice as many factories as are currently covered by the Accord”, sums up a report by the Clean Clothes Campaign (CCC).

While the Accord employs around 100 independent inspectors who carry out more than 500 factory inspections each month and has a remediation progress of 90 percent, the Bangladesh Department of Inspection for Factories and Establishments, which carries out inspections for the RCC, reports a low completion rate for mandatory safety renovations at factories the government is regulating of only 29 percent.

This faces Bangladesh’s garment industry with a real dilemma as losing the inspections to the RCC would most certainly mean going back to inspections the way they were before Accord and Alliance (Alliance for Bangladesh Worker Safety) times - insufficient, thus increasing the risk for workers, factories and international buyers. The latter find themselves between a rock and a hard place because for the sake of consistency, they should not use factories that have not been adequately inspected because the Accord is a binding agreement between unions and apparel brands, which will remain in effect through 2021.

Every Accord brand will continue to be bound to their obligations under the agreement, including the obligation to cease business with any factory that refuses to operate safely. Yet, cutting ties with Bangladeshi factories is neither practical, feasible nor ethical as factories have worked hard to remedy the situation and to establish firm ties with western buyers. Buyers have invested time, effort and money in Bangladeshi factories and will be hard pressed to find alternatives elsewhere, especially fast.

Now it is up to Bangladesh’s key trading partners to impress upon the government that there must be an “orderly transition of regulatory responsibilities - when, and only when, the government is able to fulfill them - and not a premature expulsion of the Accord”, according to CCC, stressing the fact that the Accord and its signatories are committed to working with the government to “hand over the Accord’s inspection and remediation work to a demonstrably capable national regulatory body, when that body exists”. In addition, solutions need to be developed for important aspects of the Accord like complaint mechanism and safety trainings that are not covered by a national inspection body.

“By continuing to threaten expulsion of the only credible safety inspection program in the country, the Government of Bangladesh is squandering the good will it has earned over the past five years and is demonstrating rank disregard for worker safety,” sums up the Clean Clothes Campaign the dire situation. On Thursday, all eyes will be on Bangladesh once again to see how the saga on garment worker safety continues.