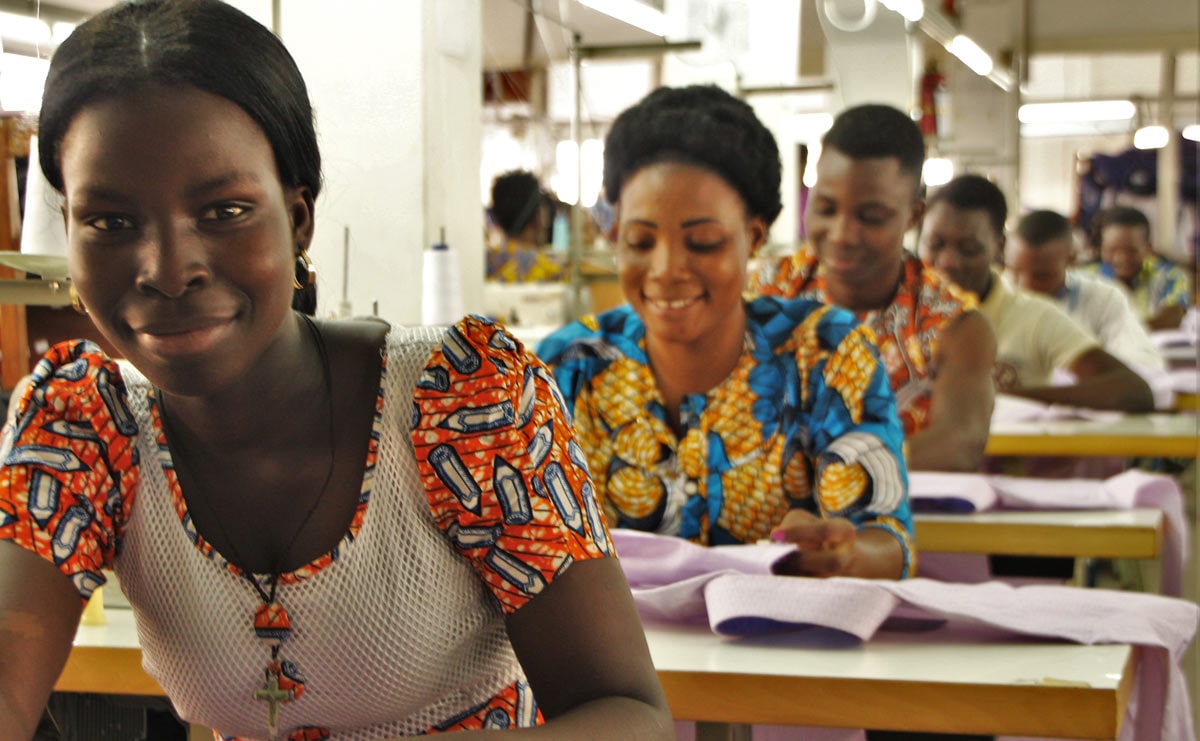 Will Ghana be the new sourcing hub? Q&A with Keren Pybus of Ethical Apparel Africa

Why is it so common for garment factory workers to be paid less than a living wage? Part of the answer is the West’s appetite for cheap clothing. In short, if consumers are not paying for it, somebody else is. But Keren Pybus, co-founder of Ethical Apparel Africa (EAA), doesn’t think ethical production and cost-competitiveness are mutually exclusive.

Half sourcing agent, half capacity building trainer, the company founded in 2015 works with factories in Ghana and Benin connecting them with international clients that order in high volumes while training them on how to comply with international standards and invest in continuous improvement so that even more orders will come in the future -- and, eventually, top fashion brands will want to move to West Africa as well.

FashionUnited spoke with Pybus to learn more about EAA’s trajectory, work and mission.

First, I’d like to ask you to introduce yourself to our readers. Tell us a bit about your career and the journey that led you to found EAA.

I have always had a passion for clothing and textiles. The most significant role in my career was moving to Bangladesh to start a sourcing office for George Clothing. Living in such an interesting country, working directly in and with factories everyday, taught me about the challenges faced in running a manufacturing unit. Through this I was always searching for programmes, tools and processes that could ensure the workers’ pay was fair and their working environments were safe.

However, I always had a yearning to return to Africa, having lived in Tanzania when I was 18. When work took me to South Africa, I thought that was my dream job. But, once there, I still wanted to be part of something that would change the industry for the better. To cut a long story short, I was made redundant pretty soon after that which gave me the shove I needed to start looking at the industry in Africa. I met my co-founder and business partner Paloma Schackert when we were both consulting in West Africa and discovered a joint vision. Together we pitched for a USAID training contract in Ghana and Ethical Apparel Africa was born.

How did you find out that Ghana and Benin would be the ideal place to start an ethical manufacturing business?

Ghana has a rich heritage of textile and clothing production for the local market but in recent years has been really affected by the influx of imported second hand clothing. The country has some great factories but they lack experience of producing for export.

Both Ghana and Benin are well positioned to be competitive exporting countries due to the low cost of living, fast shipping times to the USA and Europe, and duty free agreements with Europe and the USA under the African Growth and Opportunity Act (AGOA). Combine this with African-owned factories where the CEOs are passionate about creating sustainable and worthwhile jobs. This gave us a perfect landscape to shape an industry from the start and create best ethical practices rather than trying to fix what had been broken previously.

Same challenges as any startup: cashflow and making sure you hire the right people. Paloma and I didn’t take a salary for the first 2 years of the business and instead invested it in building the right team. The main challenge now is persuading brands to be the first movers into a new territory. Despite all the advantages I just mentioned, brands are often nervous or want to consolidate their supply bases rather than expand. However, once they visit and see the potential, generally they are ready to go on the journey.

How many brands work with EAA at the moment? The website mentions three: Blake Mill, Paw5 and Hurleys. Can you mention any others?

es, we are working with other brands but not all of them want it to be publicized. They are generally in the uniform, shirt or accessory businesses. A couple of others include the UK-based Butler & Butler and The Dutch workwear company Groenendijk.

Please tell us a bit more about the capacity building work EAA does. What does EAA help factories with and how? Is this work still backed by USAID?

We work on capacity building programmes with USAID and the UK Department for International Development (DFID). Each programme has different strands to it that include training local factories on technical aspects such as production planning, lean production and quality reporting systems, specialized skill training in areas such as mechanics and digital pattern creation, supply chain development working on unlocking the cotton to garment potential in the region, and supporting factories in attracting investments to expand.

We believe in our operating model. If you invest in operational excellence in the factory and remove excess waste in time, WIP, overheads etc, then there is enough money in the system to invest into worker empowerment programmes and benefits. Every country is different so challenges could be similar or different – for example how supportive is the government? Change for me is two-pronged. The brands need to understand more deeply the costings and what is reasonable to pay to deliver living wages. The factories need to work on ensuring their efficiencies are the best they can be. Then, together, the profits need to be invested into the workers and not into company or owners pockets.

If so many brands say they’re committed to becoming more ethical and sustainable, and manufacturing in West Africa is economically advantageous, why don’t we see more fashion brands moving their production to West Africa?

Fashion (meaning styles that change constantly) is hard to manufacture and large brands are not easy to work with. They expect short lead times and flexible production lines. West Africa is still at the beginning of its journey and is developing by producing core product in volume such as uniforms and accessories so they can build their capacities. West Africa also needs to be fully vertical which is not an impossibility given it is the 6th largest cotton growing region in the world.

How are your partner factories doing in terms of internal sales? Are they more able to compete with the influx of secondhand clothing from the USA and Europe now?

They are getting there, the local market is growing again especially in the T-shirt and polo business, but it is still a huge challenge and won’t be going away anytime soon.

What are EAA’s plans for the future?

EAA is establishing a Center of Excellence for Technical Training worth 2.4 million US dollars (1.9 million pounds) and set to launch later this year. By 2023 we want to create 2500 sustainable jobs in our partner factories, enabling their workers, of whom 70 percent are women, to support their families and uplift their communities. We want to help catalyze the growth of the Ghana apparel industry to employ over 10,000 individuals by 2023.