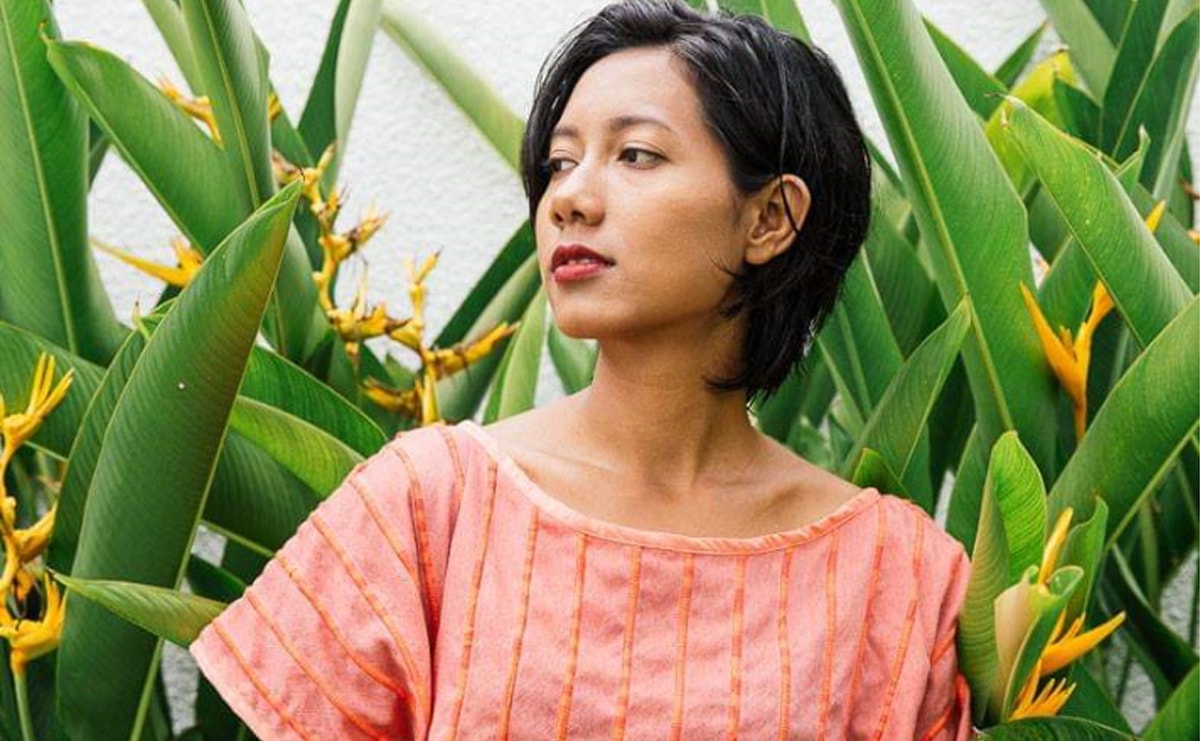 When Bea Johnson started blogging about her strive to fit her garbage for an entire year in a single jar, many people called her crazy. Eleven years later, the zero waste movement is gaining traction. Johnson has a book, a TED Talk watched by over 300,000 people and an Instagram following of 200,000. Package-free shops are popping up across the United States and cities like London and Amsterdam, and the movement is making its way into fashion as well.

Meet Tonlé, the San Francisco-based womenswear brand made entirely from surplus fabric discarded by apparel manufacturers in Cambodia. The brand’s motto is “every thread matters”: the scraps they cannot transform into new clothing are cut into strips and individually hand sewn into “yarn” for new clothes. The scraps left after that are mixed with recycled office paper and sticky rice to make tags. Working in this fashion leaves 2-3 percent waste, compared to an average of 40 percent in a typical factory, the company claims on its website. Packaging is made from recycled paper and cardboard -- except when wholesalers or warehouses specifically demand a plastic wrap.

Tonlé’s story also started in 2008, when Rachel Faller moved to Cambodia to do research on fair trade as a Fullbright scholar. Eventually, she decided to start a fashion brand reworking secondhand apparel. However, she kept coming across large amounts of textile waste from factories in the second hand markets. Cambodia is one of the most popular manufacturing countries for the fast fashion industry.

After opening a total of five boutiques in Cambodia, Faller reckoned she would have better opportunities internationally. Tonlé as we now know it was born in 2013. The company currently employs 30 people, mostly women, in its Phnom Penh workshop and partners with a weaving cooperative in northern Cambodia where 20 more artisans are employed. In addition, Tonlé has three staff in the United States, where it operates a physical store in San Francisco. Its focus, however, is wholesale: its network comprises 150 partners in the US, Europe, Japan, Australia, New Zealand and South Africa, but the brand is aiming for more. 2018 saw a 30 percent growth for the zero waste label and Faller expects even better results in 2019.

FashionUnited spoke with Faller to learn more about Tonlé’s business model, the challenges of operating with zero waste in mind and the brand's plans for the future. 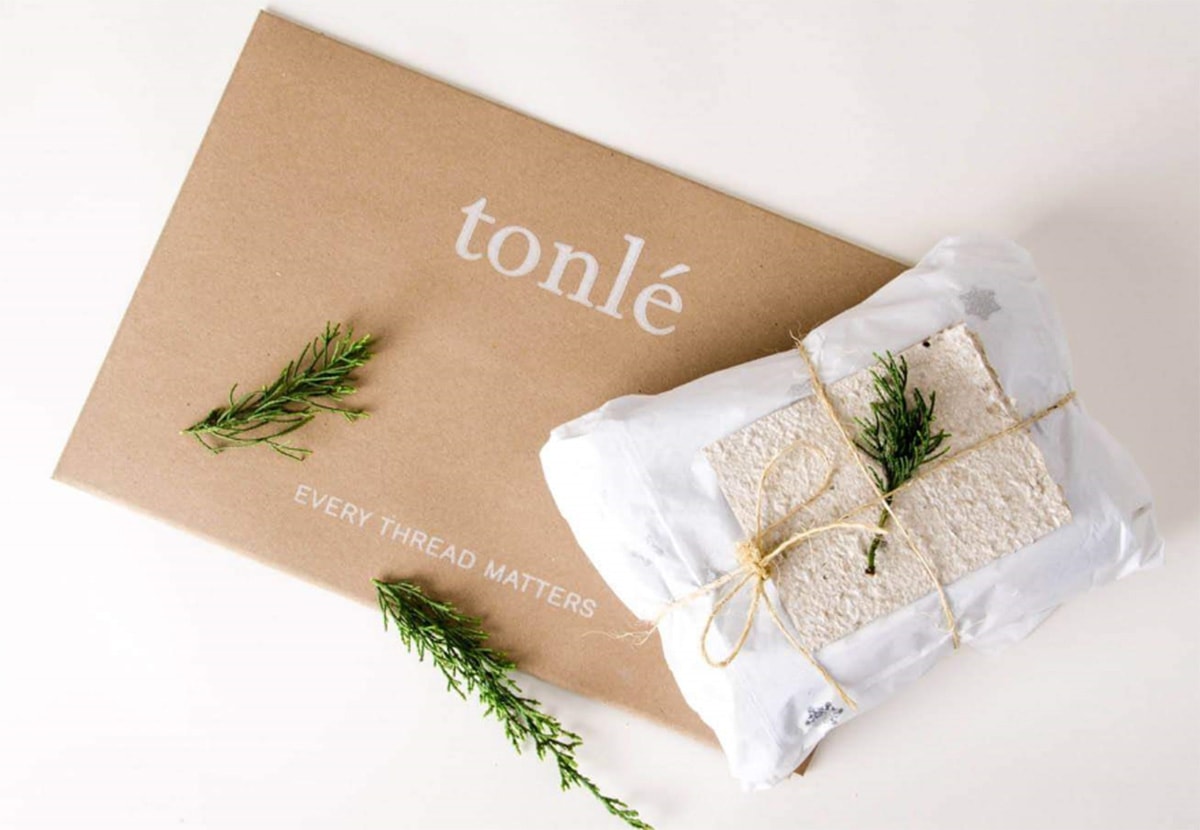 Let’s start from the beginning. What made you move to Cambodia?

I went to school for textile design but I didn’t know how to apply that in a way that felt good. So, I graduated in 2008 and applied for a grant to do research in Cambodia about fair trade and sustainability. At the time I was more familiar with fair trade from the perspective of food, like fair trade coffee and chocolate, but not as much with fair trade fashion.

I was able to work with a number of artisan groups and individual craftsmen, and I also got to see the impact of the fast fashion industry first hand because there are large factories in Cambodia producing some of the cheapest goods. I think the minimum wage was about 55 dollars a month when I moved there, it’s gone up a lot since then but it’s still low.

I decided to start a brand because there wasn’t anything in the market that would be ethical and sustainable but also affordable. I didn’t really know what I was getting into at the time, but I started with local stores in Cambodia selling to the local community, expats and tourists.

What were the main challenges you faced in the two phases of your business?

The most challenging thing was to set up everything from scratch, from training people to opening stores, I had to do everything myself. Bootstrapping a business is hard when you don’t have funding. I had some small grants or loans from friends and family. I didn’t really know where I was getting myself into, so I made a lot of mistakes along the way because I didn’t have support. One thing I’ve learned is that you don’t have to reinvent the wheel in everything, there are things that are already being done that you can just contribute to. 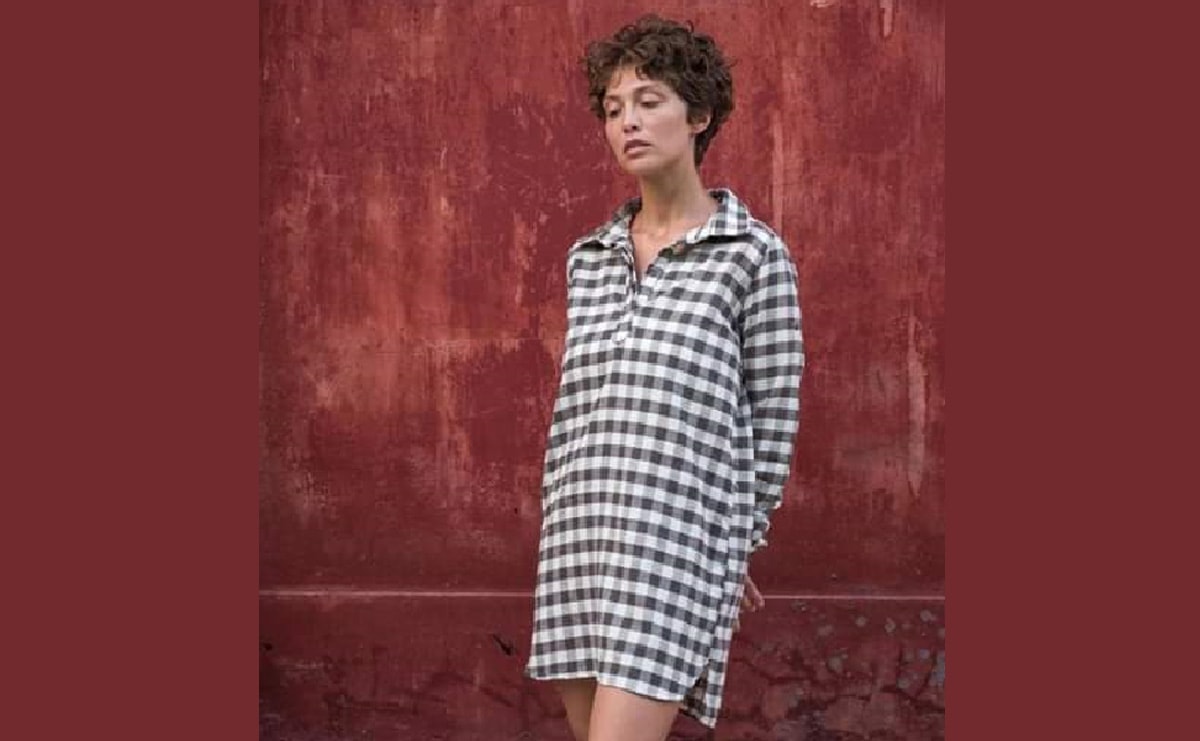 What’s been challenging in this second phase, as an international brand, is that there’s been more and more sustainable brands in the market, but also there are many brands marketing the sustainability aspects of their business, whether or not that’s legitimate. All of a sudden, in the online space especially, we’re having a hard time to get our message out there. Big companies are throwing huge amounts of money at marketing their sustainability, that’s kind of frustrating because I’m spending all my money trying to be sustainable rather than telling everyone I’m sustainable.

It’s so expensive to run a company in this way, I can’t put half my budget into marketing. Just the shared volume of ad space that big brands can buy, not to mention working with influencers, paying for PR and all that stuff. I think they’re kind of overshadowing us.

How do you source fabrics now? Do you still rely on the scraps from the second hand markets or do you get them directly from factories?

Today we only work with pre-consumer textile waste: dead stock, quality control failures and scraps. I’ve been in talks with some factories to get waste directly from them, but mostly we’re working with middleman dealers who either get the scraps from the factories directly or collect it from the trash, clean it and then bag it up into different sizes, shapes and colors.

How do you go about achieving zero waste in your production?

We basically take the larger pieces of scraps, which could be either dead stock or off-cuts and we make our t-shirts and dresses from that. Then we take the small scraps that are left from that and those are cut into strips and woven into new fabrics, we can make a kind of jersey yarn out of it. Those fabrics get turned into new garments like jackets and vests, and then we have very small pieces that are left from that and we use them for stuffing or making paper.

If Tonlé is able to do so much with factory waste, why can't other brands use fabric in a smarter way?

The fundamental problem that generates all this waste is the fact that design and production are very separated in most companies. There’s a design team that decides what they want to make and it’s usually based on trends and season forecasting, things that have nothing to do with production, and then there’s a separate production team, usually outsourced, that goes and makes those things. Usually, brands have fabrics from different parts of the world being sent to factories in different parts of the world, they have this really complex supply chain. The design teams aren’t considering all of that, let alone what happens to all the waste. So we really have to have a strong dialogue between production and design, and a short supply chain to be able to manage that.

But, honestly, I don't think factories want brands to know that there is so much waste because most of the brands don't want their fabrics to end up in the second hand markets. When the fabric is protected by intellectual property, something trademarked to the brand, they’ll usually burn it or destroy it somehow. There are no reliable statistics about how much fabric is being wasted by the garment industry because it’s really not being measured. Brands don’t have an incentive to understand this problem or fix it.

Tonlé is relatively small but we’re drawing attention to the existence of all this waste. It’s a big statement: these things are still useful, we shouldn’t be seeing it as waste. 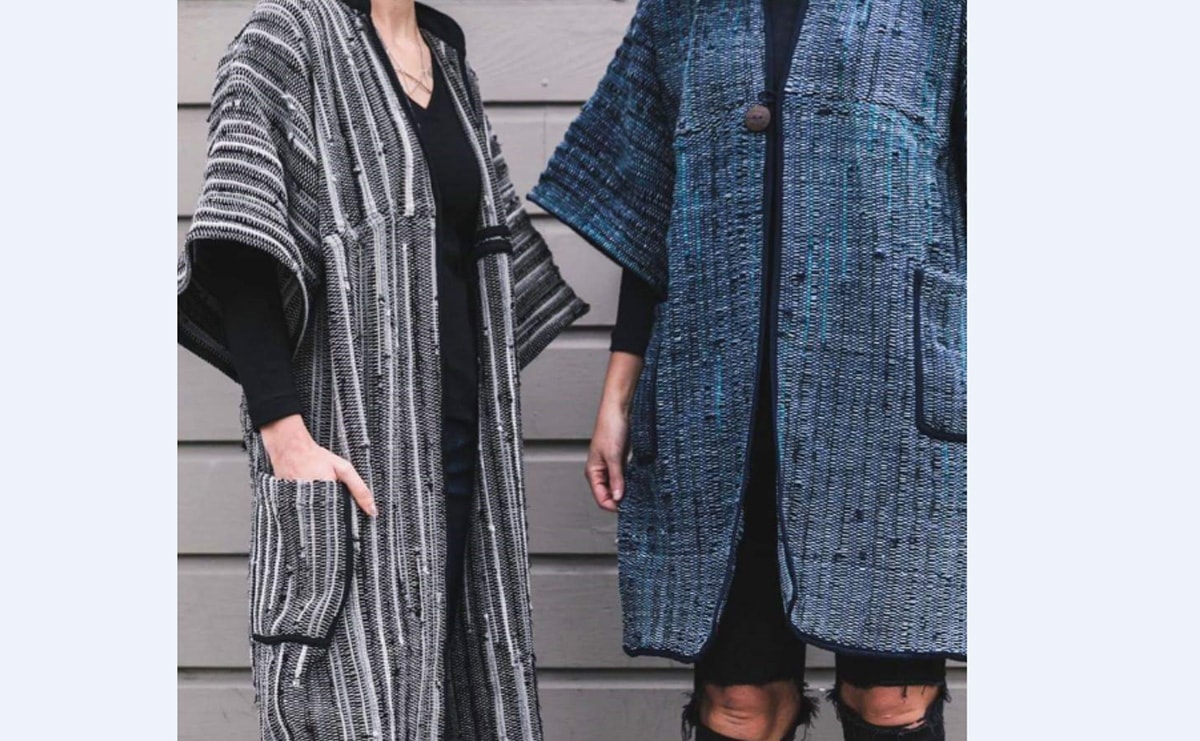 How many items does each Tonlé collection have?

We work with colors that we know we’re always going to find, like black, grey and off-white T-shirt jersey. We design our collections around that. When using dead stock, usually we get up to 200 meters of fabric, so we just make a certain number of a given piece and when it’s gone, it’s gone.

What tips would you give to fellow fashion entrepreneurs looking to reduce waste?

Try to reduce plastic packaging as much as possible at every stage. Almost all warehouses require people to ship things in plastic. Even though the customer might come into your store and not see a plastic bag, there’s still plastic waste that occurs on the way to get that product there. If more designers and retailers would speak up about this problem, if they would put pressure on the warehouses and factories to use alternative methods, that would be great.

Another big one is better inventory planning and understanding your business needs, make sure you’re ordering the right product. Most of the time there’s a huge amount of waste left over at the end of the season, especially in large retail. Last but not least, work closely with your factories, if you’re a designer and you’re working with a factory, be really close to them so you can understand the waste that’s been produced, what the quality control failure rates are, things like that. Most of the time, designers never even ask these questions. 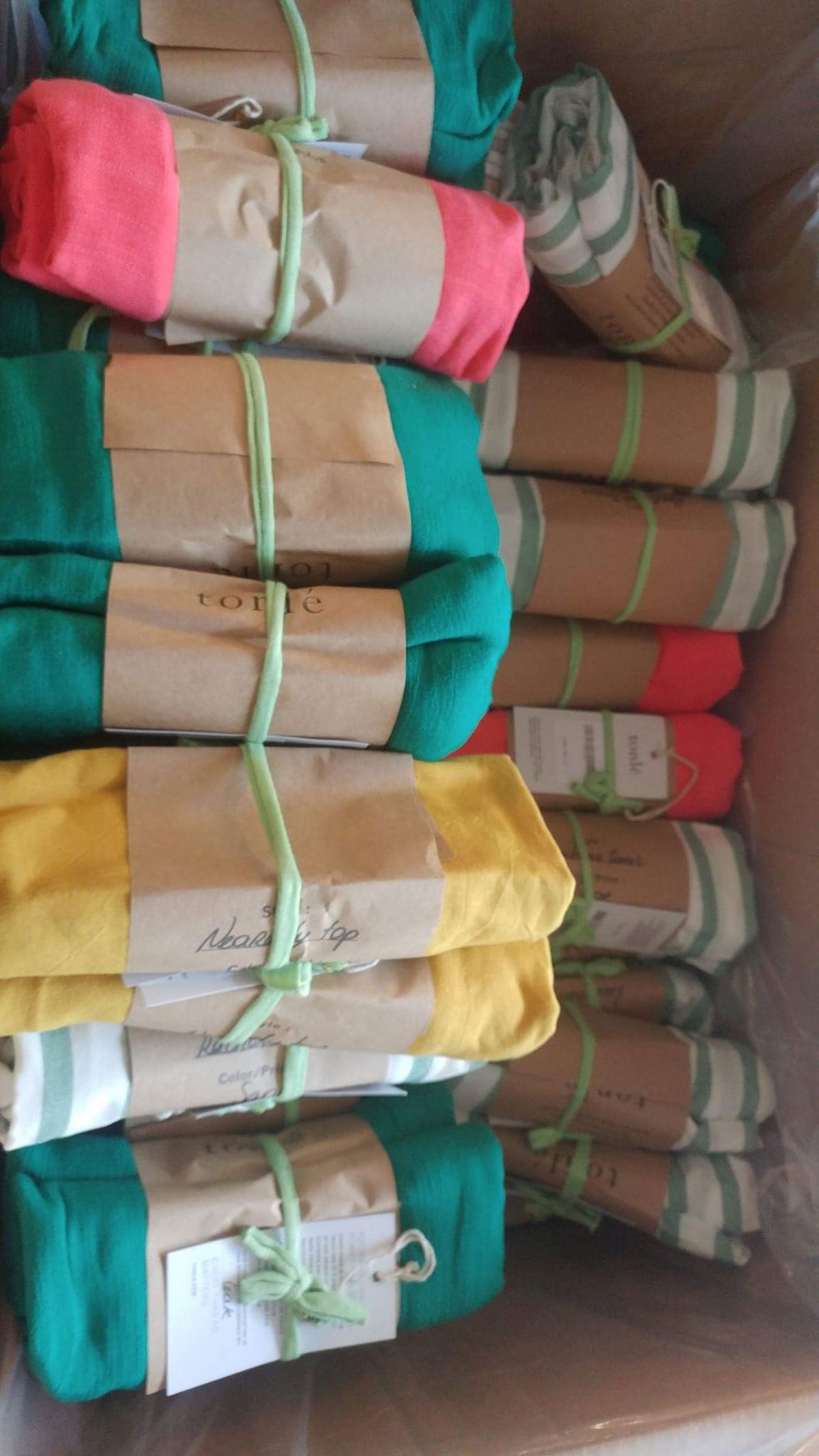 Speaking of packaging, what's Tonlé's policy in that regard?

All our shipments from Cambodia to the US are wrapped with recycled paper with a fabric yarn around it and then put in a recycled cardboard box. We do use a plastic sleeve that goes around the whole shipment because it’s required. That’s the only plastic that we use.

When it gets to our warehouse in the US, all of the styles get separated into bins, and then we package them for customers in recycled craft mailers so there’s no plastic packaging. We’re working on mailers that would be reusable so customers can send them back to us.

What about recycling the garments after customers don't want them anymore? Any plans on reducing waste in that front?

We’re working on some potential ideas for recycling, I can't tell you much right now but they should be coming within the year.

What are Tonlé's plans for the future apart from expanding its wholesale network?

Working with other manufacturers outside of Cambodia, other ethical fashion factories or organizations. I am talking to a few other potential production partners at the moment.