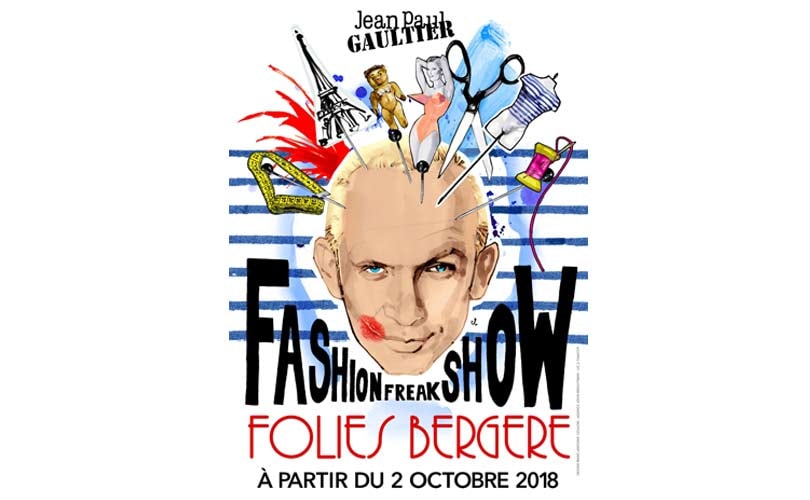 Flamboyant French fashion designer Jean-Paul Gaultier is to celebrate 50 years of pop culture seen through his eyes with a new stage musical, Fashion Freak Show that will premiere in Paris next October, before going on an international tour.

Gaultier renowned for his theatrical catwalk shows, will be incorporating his “eccentric, scandalous, and provocative” personality into a stage show that combines cabaret with a fashion show at the at the iconic Folies Bergere theatre in Paris.

“This show is the story of my life, things I have experienced, seen and loved. And also stories that I have never told before!”

The show will feature everything from his childhood to his early career, including his greatest fashion shows to “wild nights” in Le Palace and London, as well as pay tribute to artists that have inspired him including pop icons Madonna, Kylie Minogue, and Mylène Farmer to film directors Pedro Almodovar and Luc Besson, and dancers Régine Chopinot and Angelin Prejlocaj.

“This show is the story of my life, things I have experienced, seen and loved. And also stories that I have never told before!” explains Gaultier. “I discovered the entertainment world at the age of nine while watching a Folies Bergère revue on TV and I found out what a fashion show was through Jacques Becker’s film, “Falbalas”, in which Micheline Presle falls in love with a fashion designer played by Raymond Rouleau. With the Fashion Freak Show, I intend to bring these two worlds together. It is very exciting to be given the opportunity to stage the revue in the Folies Bergère.”

For the ‘Fashion Freak Show’, which is described in the press release as a “grand party” where Gaultier “will surprise us yet again”, will feature ten new exclusive outfits designed by the French designer to incorporate within an exuberant scenography.

Gaultier has written the show, and will co-direct and produce the set design, in collaboration with actress, scriptwriter and director Tonie Marshall, who co-directs the show, and Marion Motin, who has worked with Madonna, on the choreography. The cast will be actors, dancers and circus artists, who will take to the stage and play “outlandish, passionate, larger than life, rude, sexy, sassy creatures and personalities”, explains the designer, while the music will range from disco to funk, pop and rock, basically the playlist of his life.

Describing what the show will cover, Gaultier said: “I will tackle new issues such as plastic surgery and the creatures it spawns, or the vanity fair of social media. All that has been an inspiration for a number of new costumes. Clothes can say so much about their time, the way we relate to femininity and masculinity, sexuality, about what we consider different and where the limits of society are.

“I want to show difference. For there is beauty to be found everywhere, it all depends on how one chooses to look at it. I’ve always loved freaks, weirdoes, agitators, the mixing of different aesthetics, the unexpected encounters. This transgressive energy will be on show for all to see. It will be about joy and dreams, I would like every member of the audience to leave in a happier mood than when they arrived. It’s going to be a huge party! I hope that the audience will enjoy the show just as much as I did when creating it.”

The ‘Fashion Freak Show’ will premiere on October 2, 2018, with tickets going on sale today, November 9 with tickets priced from 39 euros.