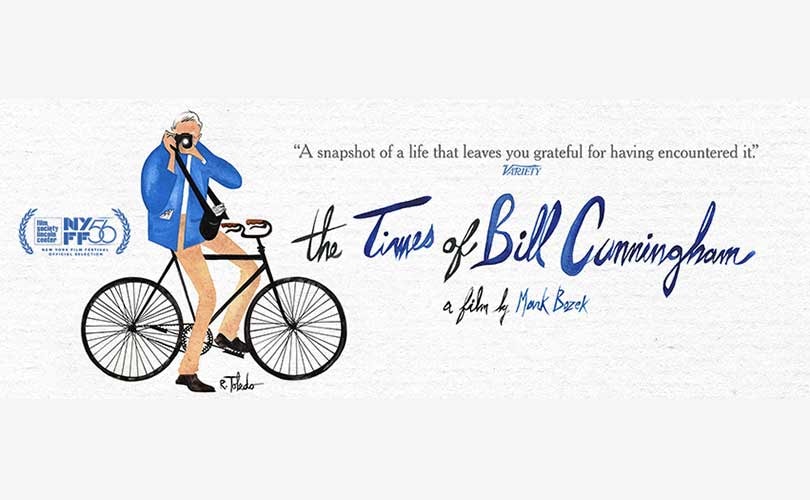 This weekend sees the opening of the second documentary about the original streetstyle shutterbug, entitled The Times of Bill Cunningham. It centers on a 1994 interview with Cunningham by director Mark Bozek which was supposed to last ten minutes but ended when the tape ran out after six hours.

Narrated by Sarah Jessica Parker the film weaves through Cunningham’s Catholic upbringing, his early millinery, his stationing in France during the Korean War when he sneaked off to the Paris fashion shows, and a surprising stint in fashion journalism. But it focuses on the four decades Cunningham cycled the streets of Manhattan shooting trends for the New York Times. Indeed the interview occurs a few weeks after Cunningham had been knocked from his bike by a truck while on the job––and he didn’t have health insurance. We learn that, although famously frugal, the photographer quietly donated millions of dollars to the Catholic Church and AIDS research during his lifetime, and that when fashion illustrator, Antonio Lopez, succumbed to the disease, Cunningham bought a piece of his art for 120,000 dollars, then promptly returned it so Lopez could sell it again to pay for his treatment. Cunningham also amassed a fine collection of art and diamonds which he stored in a canvas bag in his cluttered little Carnegie Hall Studios residence, yet he slept on a narrow foam mattress for those forty-five years, and shared a bathroom with the other residents of the twelfth floor.

First time filmmaker Bozek (who is a former Home Shopping Network CEO) didn’t set out to make a fashion movie, but after Cunningham died in 2016, he dug out the Betacam tape, realized its significance and so began this passion project. Cunningham himself never thought of himself as a fashion photographer but as a fashion historian and the film is enriched with some 500 black-and-white and color shots of Cunningham’s New Yorkers, from the reclusive Greta Garbo ducking out of her apartment in fur to scantily clad revelers in the first Gay Pride parade to an anonymous summer stroller sporting polka dots on a midtown crosswalk. At this week’s pre-screening intriguing layers of Cunningham’s personality, which are touched upon in the film, are filled in by Bozek during a director’s Q & A who also communicated with Cunningham’s niece and dear friends Isabel and Ruben Toledo, both huge supporters of the documentary.

Bozek describes Cunningham as a “unique, fragile, complicated New Yorker who I truly believe they’re going to name buildings after and build statues to because he’s part of the fabric of the city since 1952.” Sadness appears close to Cunningham’s surface and he breaks down a couple of times during the film, once when discussing his shyness, another when he remembers friends lost to AIDS. But Bozek says,“He was not a lonely man, the Toledos had dinner with him weekly at the cheesiest, greasiest dives off Seventh Avenue, having met him as club kids back in the 80s when they first arrived from Cuba.” But his friends were protective of him. “He had a very private side," says bozek had his uptown people the downtown long island but he kept friendships separate.>

At the film's rollout events in NYC this weekend Bozek is to be joined by other iconic New York fashion figures such as André Leon Talley, Bethann Hardison, and Norma Kamali to celebrate Cunningham's legacy.

In completing the film Bozek was granted access to an archive of three million documents and photographs, letters, tape recordings of Diana Vreeland, phone calls with Charles James, relentless note-taking from the legendary 70’s Versailles show about which French and American designers were fighting with each other, and much more. “When they sell this archive,” predicts Bozek, “it will blow people’s minds.”

Until then we have The Times of Bill Cunningham.