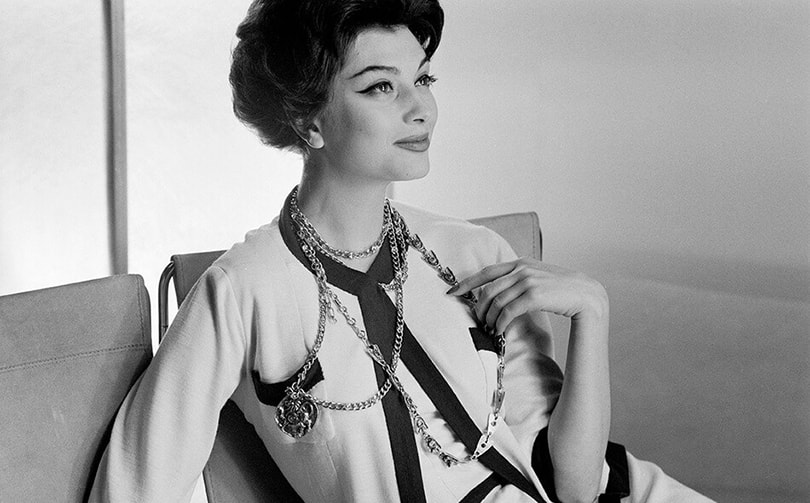 After a two year renovation, the Palais Galliera in Paris re-opens its doors on October 1st with a highly anticipated retrospective of fashion designer Gabrielle Chanel (1883-1971).

An icon of modern fashion, Chanel revolutionised a predominant male industry with her fashion manifesto.

The first part of the exhibition is chronological, recounting Chanel’s early beginnings with a few emblematic pieces, including the famous 1916 marinière, a sailor blouse, in jersey. The journey follows the development of Chanel’s unique style, from the little black dresses and sporty models of the Roaring Twenties to the sophisticated gowns of the 1930s. One room is devoted entirely to Chanel’s iconic perfume, N° 5, created nearly 100 years ago in 1921.

Practical and at the same time elegant, Chanel’s clothes took their inspiration from sportswear and borrowed some of the codes of masculine elegance and dandyism. Taking techniques and materials hitherto unheard of in the world of haute couture, she associated the commonplace with luxury, used ordinary fabrics like jersey or tweed to create casual-looking outfits whose cut and proportions exuded refinement and distinction. With this balance, Chanel created an instantly recognizable style.

The exhibition is curated in ten chapters, accompanied by ten portraits, which show the extent to which the couturière herself was the embodiment of her brand. During the war Chanel’s business was forced to close, the only items which remained for sale at the brand’s flagship boutique at 31 rue Cambon were perfume and accessories.

When the fashion world saw the arrival of Christian Dior and his New Look – the corseted style that she so objected to - Gabrielle Chanel reacted by returning to couture in 1954 when she was well into her seventies. Going against the trend, Chanel reaffirmed her fashion manifesto to take a stand against the fashion of the day.

A manifesto of her vision of the modern woman.

The extreme simplicity of Chanel’s tailleur was the epitome of the guiding principles that had made her so unique and so successful. Every aspect of its construction was designed with respect for the female anatomy, perfect balance of the silhouette, and a concept of elegance that combined simplicity and naturalness.

The precision and refinement of the Chanel jacket and skirt suit became an embodiment of freedom. The jacket was so soft and light that it was more like a kind of cardigan. The skirt, instead of nipping the waist, rested on the top of the hips, angled slightly backwards and hanging below the knee, making it comfortable, mobile, and allowing complete freedom of movement. The trim, in contrasting colours, which was also part of its uniqueness, accentuated and visually structured the silhouette while keeping it supple.

Other icons, such as the 2.55 bag and beige and black pumps solidified Chanel’s view of accessories as an essential element of a harmonious silhouette. They also reflected her pragmatic vision of fashion while at the same time contributing to the codification and unity of her style.

An icon of French fashion

The exhibition, titled “Gabrielle Chanel. Fashion Manifesto”, covers an area of nearly 1500 m2 – including the newly opened basement galleries. With more than 350 pieces from the Palais Galliera collections and Patrimoine de Chanel, the exhibition features pieces loaned from international museums, including the Victoria & Albert Museum in London, the De Young Museum in San Francisco, the Museo de la Moda in Santiago de Chile and the MoMu in Antwerp.

“Thanks to the invaluable support of Maison Chanel, the history of fashion, the excellence of French haute couture, know-how and creation will now have a prestigious base in these new rooms that the Palais Galliera will be proud of,” Olivier Saillard, former director of the museum, said at the start of the renovation.

The Palais Galliera has one of the largest collections of 18th century fashion in the world, housing over 30,000 garments, 35,000 accessories, and 85,000 photographs and graphic art documents.