The V&A Museum in London is placing a spotlight on Japan’s most famous fashion garment, the Kimono with its latest fashion exhibition.

Entitled ‘Kimono: Kyoto to Catwalk’, the exhibition marks Europe’s first major exhibit on the kimono, revealing the sartorial and social significance of kimono from the 1660s to the present day, both in Japan and in the rest of the world.

For the first time in the UK, rare 17th and 18th century kimono are displayed, alongside creations designed John Galliano for Dior, Yves Saint Laurent, Thom Browne, Rei Kawakubo and Jean Paul Gaultier, as well as kimono worn by Freddie Mercury and Björk, and original Star Wars costumes modelled on the kimono by John Mollo and Trisha Biggar and Oscar-winning costumes from Memoirs of a Geisha.

In total, more than 300 works are featured in the exhibition, with paintings, prints, films, dress accessories and other objects featured alongside the garment to showcase the fascinating story of the style, appeal and influence of the kimono, as well as special kimonos that have been especially made for the show. These pieces have been half drawn from the V&A’s superlative collections and the rest generously lent by museums and private collections in Britain, Europe, America and Japan.

Anna Jackson, curator of Kimono: Kyoto to Catwalk at the V&A, said: “From the sophisticated culture of 17th-century Kyoto to the creativity of the contemporary catwalk, the kimono is unique in its aesthetic importance and cultural impact giving it a fascinating place within the story of fashion.”

The exhibition opens with a trio of kimono, representing the past, present and future of the garment, with an antique kimono from 1800 alongside John Galliano for Dior’s pink bar jacket with cherry blossoms embroidery, origami wide sleeves and a matching embroidered wrap-around gown from the French fashion house’s spring 2007 Haute Couture collection, and a contemporary kimono by Japanese designer Jotaro Saito.

“The fact that its shape remains constant has meant that people tend to see the kimono as unchanging and traditional,” added Jackson, during the exhibition press preview. “We want to show it as fluid and fashionable.”

The first part of the exhibition begins in Edo-period Japan, where the walls have been painted a shade of ‘green tea’ and highlights the history of the simple structure of the kimono, focusing on the mid-17th century when a vibrant fashion culture emerged in Japan, when wealthy merchant classes demanded the latest styles to express their affluence, confidence and taste.

Here the V&A highlights the home of the kimono, Kyoto, the simplicity of the pattern, the luxurious embroidery, as well as the rich history of the Japanese garment, before taking the visitor to Europe to explore how the garment travelled the world, with the first kimono exported to Europe in the mid-17th century, as well as how foreign fabrics were brought to Japan and incorporated into kimono.

Rare survivors from this early period of cultural exchange, including garments made in Japan for the Dutch and kimono tailored from French brocade and Indian chintz, are on display to reveal the fluid fashion relationship between East and West that resulted from the global trade network.

A highlight includes the portrait of Anna Elizabeth van Reede, mistress of Slot Zuylen castle near Utrecht, who is captured wearing a magnificent colourful kimono-style silk robe embroidered with chrysanthemums and blossom, which would have been selected to proclaim her status and taste.

The exhibition moves onto the late 19th century, which saw a worldwide craze for Japanese art and design, and features kimono brought from department stores such as Liberty and Co. and boldly embroidered ‘kimono for foreigners’ made in Japan, which was also going through a domestic market transformation with the use of European textile technology and chemical dyes. 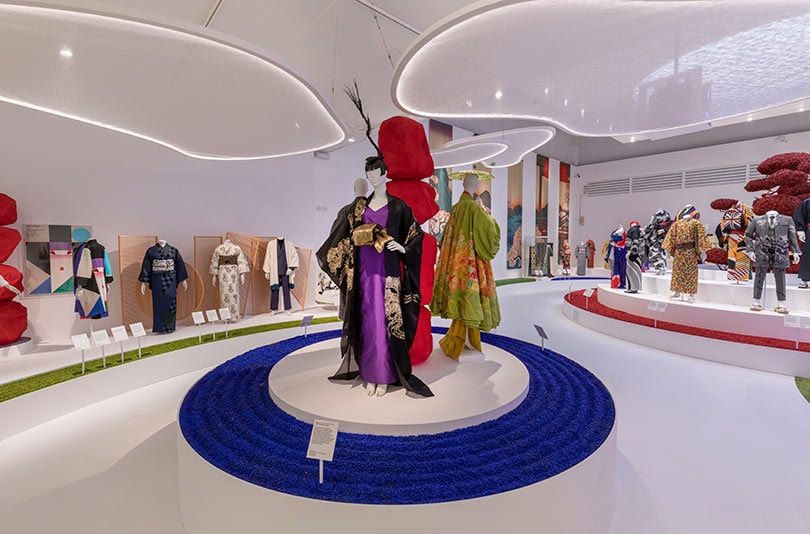 The kimono’s biggest impact on western fashion came in the early 20th century and is highlighted with designs by designers including Paul Poiret, Mariano Fortuny and Madeleine Vionnet who abandoned tightly-corseted styles in favour of loose layers of fabric that draped the body. This was part of a broader fascination with East Asia, explains the V&A, which can be seen in jewellery and dress-accessories of the period on display, particularly those created by the celebrated French firm of Cartier.

On display is a cream-coloured wedding dress by Madeleine Vionnet inspired by the kimono, a red evening coat by Jeanne Lanvin, and a kimono-style coat believed to have been designed by Emilie Flöge who was part of the Viennese avant-garde that featured extraordinary sleeves, one longer than the other.

The show concludes with an international flavour, featuring designs by Thom Browne, Duro Olowu, Yves Saint Laurent, and Yohji Yamamoto, highlighted around a giant red bonsai-style tree, to showcase how the kimono has continued to inspire fashion designers around the world.

As well as well known names from fashion, the final section also highlights how the kimono’s timeless, universal quality has also made it the ideal costume for film and performance, with the outfit worn by Toshirō Mifune in Sanjūrō, Oscar-winning costumes from Memoirs of a Geisha, and the Jean Paul Gaultier ensemble worn by Madonna in her video Nothing Really Matters on display.

There is also the costume for Obi-Wan Kenobi, played by Alec Guinness in the 1977 film Star Wars: Episode IV - A New Hope, a kimono worn by Freddie Mercury on stage, and an Alexander McQueen kimono design which Björk wore on the cover of her 1997 album Homogenic.

‘Kimono: Kyoto to Catwalk’ will run until June 21, 2020, at the V&A in London. It will then move onto the Museum of World Culture, Gothenburg, Sweden, the Van Gogh Museum, Amsterdam, and the Montreal Museum of Fine Arts, Montreal.

Images: courtesy of the V&A Museum