We knew that the day where fashion fairs change their format from physical to digital would come, but perhaps we hadn’t expected it so soon. As a response to the current pandemic, the Amsterdam-based denim sourcing fair Kingpins was forced to announce the cancellation of its edition in Halfweg. A few weeks after this, however, a new concept was launched: Kingpins 24, a fully online event.

Kingpins24 took place for two days, the same length as the original Kingpins Amsterdam event would have. The digital experience allowed people to watch more than 200 videos, 42 powerpoint presentations of exhibitors and more than 35 webinars from the comfort of their own homes. Though information on the format of the videos was vague in the days leading up to the event, in the end, Kingpins24 consisted of one continuous live stream, as well as pre-recorded episodes, live interviews and talks by exhibitors. The content was free to anyone who wanted to attend the two-day online event, with the exception of the trend presentations by Amy Leverton and Denim Dudettes, where a time slot pass had to be purchased for 35 euros. By registering for free and installing Zoom, visitors were able to gain access to the livestreams on the Kingpins24 website.

As can be read on the Kingpins website, managing director Vivian Wang first came up with the idea for an online exhibition. In regard to the event’s visitor experience, founder Andrew Olah explained in a letter: “We know that there will be things that will not go well, since we have never done this before. But we also know that there will be things that are not bad and that some things will be fantastic. If you never try, you can never be successful.” In Amsterdam, just before 9am on Wednesday morning, viewers heard waiting music on the live stream. Then, at 9am sharp, Andrew Olah appeared from Houston Texas, where it was 2am at the time. The founder of Kingpins explained that Kingpins24 was realized within thirty days and that 75 percent of usual Kingpins Amsterdam exhibitors would participate in the online edition. All information, videos and presentations could be found on the Kingpins24 website and the livestream of the two-day event will be available for two weeks, until May 8. This is necessary, as the text of certain presentations was not always sharp and easy to read. In the chat, visitors were reassured that the content could still be viewed in a better resolution on the mini-website of Kingpins24 afterwards. On the first day of the fair, the majority of the livestream content was already available on the ‘on-demand’ part of the website, which caused some confusion. During one of the interviews, Olah reported that about 99 percent of the videos, presentations and interviews were pre-recorded. This was the most foolproof option, as the organization had no prior experience with live streaming.

Anyone who was not able to see the content on April 22 and 23, or within the next two weeks, can already look forward to a new edition. In the introduction early on Wednesday morning, Olah revealed that Kingpins24 will return in June, around the time that Kingpins New York would have ordinarily taken place. “There are brands that couldn’t take part right now that are interested in being part of the event.”

Is an online version of Kingpins the future? At the beginning of the first day, all participants shared the desire to meet again in Amsterdam in October. But, according to the chat, the event attracted a worldwide audience. People from Columbia, the US, Hong Kong, Pakistan, the UK, Bangladesh, Italy, Turkey, Japan, Mauritius, Spain, Russia, Germany, China and India were present. During one of the interviews, Andrew Olah cheerfully reported that at that moment, noon in Amsterdam, 621 people were watching live. 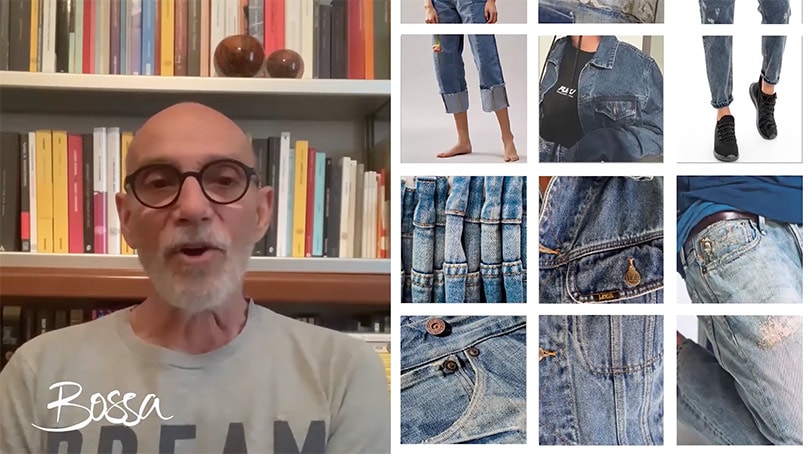 It seemed easier to gather information on the livestream or the on-demand content during Kingpins24 than at a conventional, physical trade show. Companies shared what they wanted, from the latest products or innovations to their history or a look around the factory. Tuning into the livestream could have helped people come across new companies that they wouldn’t ordinarily have at a crowded, physical fair. During one of the panels, Simply Suzette’s Ani Wells explained that the online trade show can be considered as a democratization of information, since it was accessible worldwide, ranging from companies that may not have had the budget to travel to consumers interested in the industry. Additionally, Triarchy’s Adam Taubenfligel added that the extra budget from less traveling could be spent on research and development instead. He was also of the opinion that, in a tactile industry like denim, industry professionals only need to meet physically once a year. “Denim is not a product that changes a lot. If innovations are present once a year and we are buying fabrics for two seasons at the fair, then one event is enough for me. No one loses business and we are left with a budget that can be used for other things than travelling,” he said.

Kingpins was actively trying to improve the concept of Kingpins24, as was indicated by the monitoring of the chat and the polls that participants were asked to fill in. One of the questions inquired as to how visitors experienced the event, to which someone answered “like a long advertisement of exhibitors.” As Olah had said beforehand and repeated several times during the event: “there are going to be bad things, great things and very great things.” Regardless, the fact that the denim fair created this event, which also allowed the majority of its usual exhibitors to share their stories, within thirty days is impressive. Despite the pandemic, Kingpins actively connected the denim industry and achieved the goal that it had set for itself.

This article was originally published on FashionUnited.NL, translated and edited.