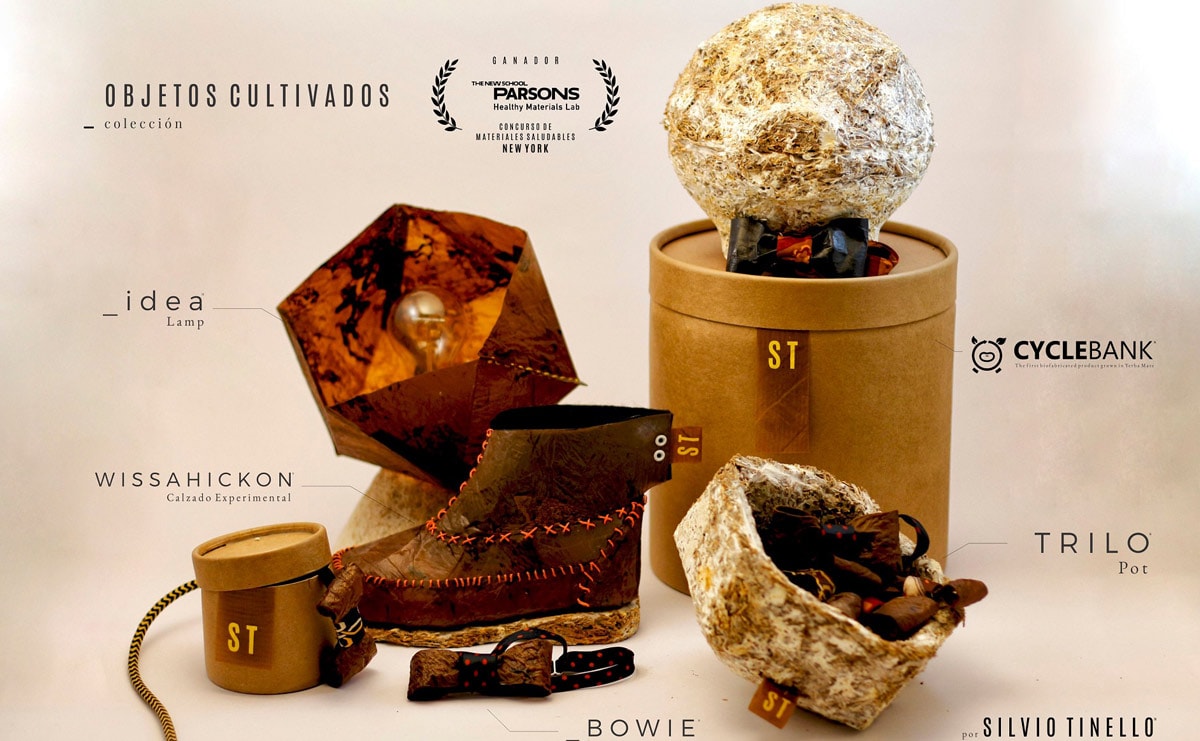 Buenos Aires - Industrial designer Silvio Tinello has developed a material from the waste of yerba mate - a type of holly plant which is used as a national drink in Argentina - to create sustainable fashion garments.

Originally from the province of Chubut, in Argentina, Tinello graduated as an industrial designer at the National University of Córdoba and completed a Master’s in Science on Sustainable Design at the University of Philadelphia, with a Fullbright scholarship. He was also given the opportunity to do an art and science residency at the Genspace community laboratory in New York.

The designer says that fashion products from his collections are circumstantial; while he was in New York he attended a conference organized by the English designer Suzanne Lee and listening to it marked a turning point for him. Lee propose a change of paradigm by producing ‘cultivated clothes’. 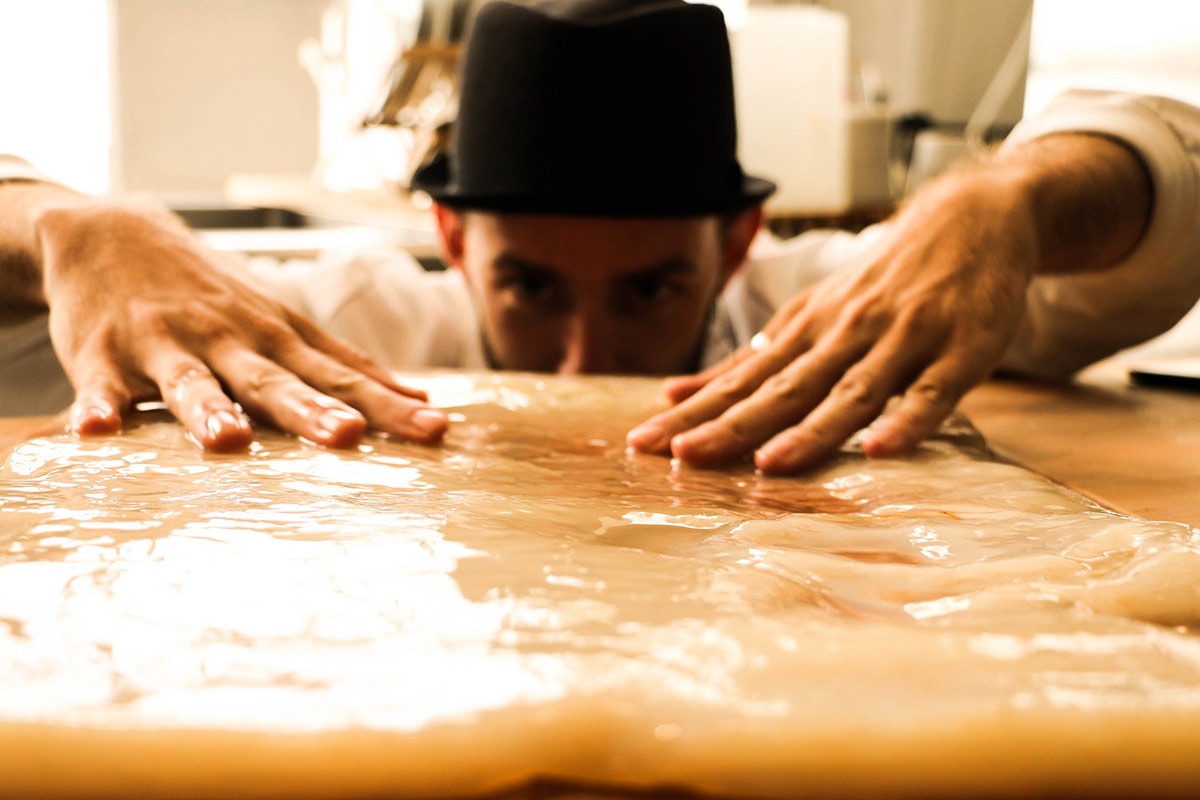 What is yerba mate?

It is a South American tree whose leaves, when processed, serve as a tea drink. It is traditionally drunk in countries such as Argentina, Uruguay and part of Brazil.

The beginning of biomanufacturing

“For my master’s thesis in 2013, I started researching the yerba mate process in order to produce a fungal bioagglomerate, an organic Telgopor. I was not drinking mate, but when I went to live in Philadelphia it reminded me of my roots. I contacted producers and found that there are tons of yerba sticks that are discarded due to a quality issue, because yerba leaves have more flavour and the stick doesn’t,” recounted Tinello in an interview with FashionUnited.

A piggy bank in the form of a pig was the first biomanufactured product that the designer presented at the University of Philadelphia. Since then, he has produced two collections with the yerba mate-derived material. 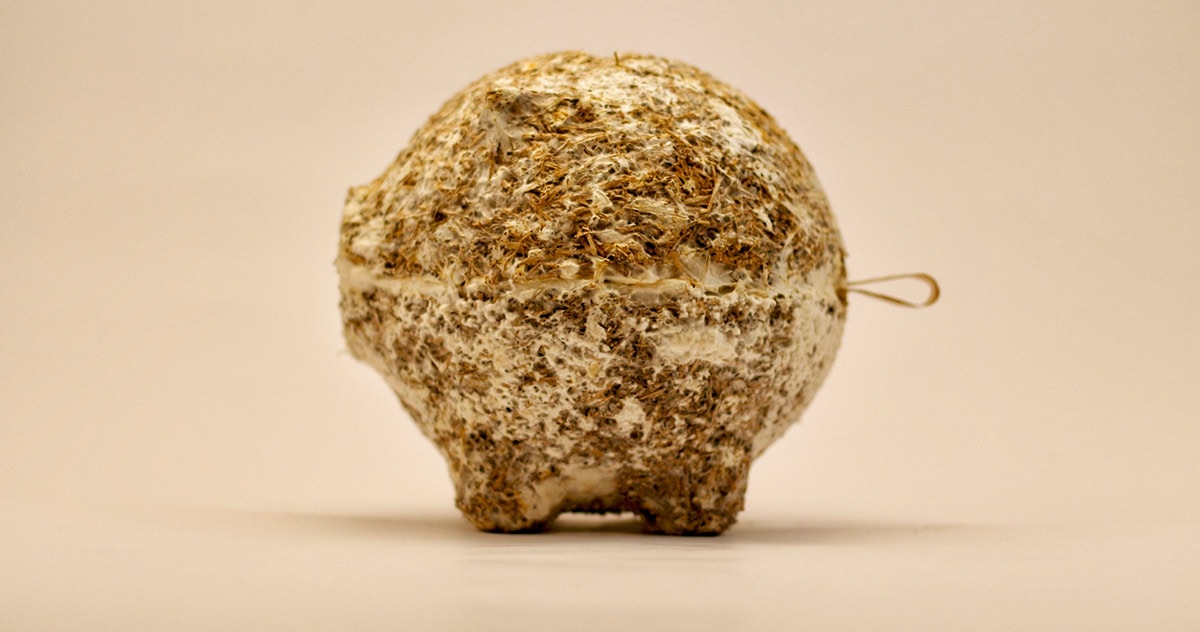 The fungal agglomerate is achieved by planting a fungus that can be edible or medicinal (non-toxic) into the grass to generate a new material that looks like Telgopor [a type of polystyrene]. “In terms of contamination, nothing happens because it is organic, but with regard to the production process, there is an opportunity for improvement. I proposed a system to develop materials within the framework of circular economy models. The tons of yerba that is discarded can be used for something. Production is scalable and can be adapted to different needs,” explained Tinello. 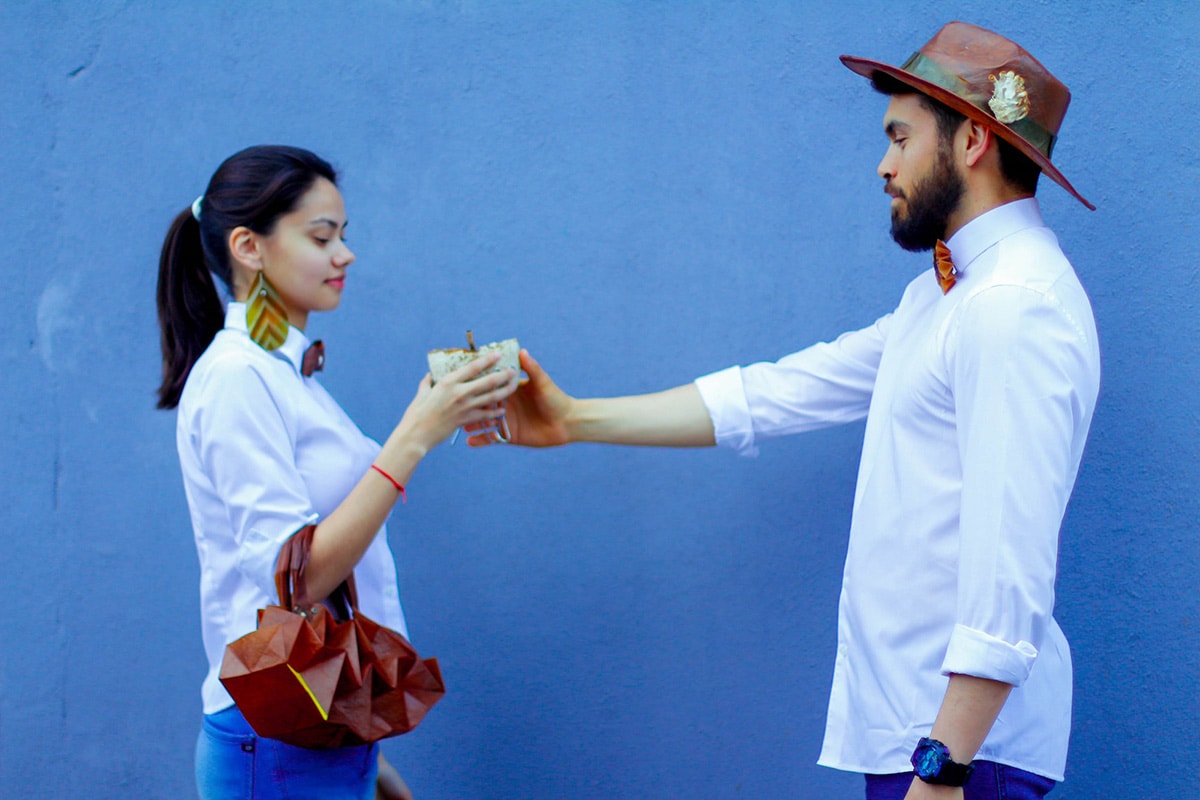 So far, the designer has presented two biomanufactured collections: “Grown objects,” from 2017 and “Eco warrior” from 2018. They both include fashion accessories such as bow ties, necklaces, hoops, hats and bags. His “Eco Warrior” collection has a special story: “A few years ago I went to the Philadelphia art museum, where there was a display of armour. And I found myself asking what current armour would be like in future museums. I can now answer that question and add another one: Will there be any armour to display in the future? Actually, if there isn’t, that means that we did things right. The concept of Eco warrior is like a warrior coming from another era to make us aware of the damage we are doing.” 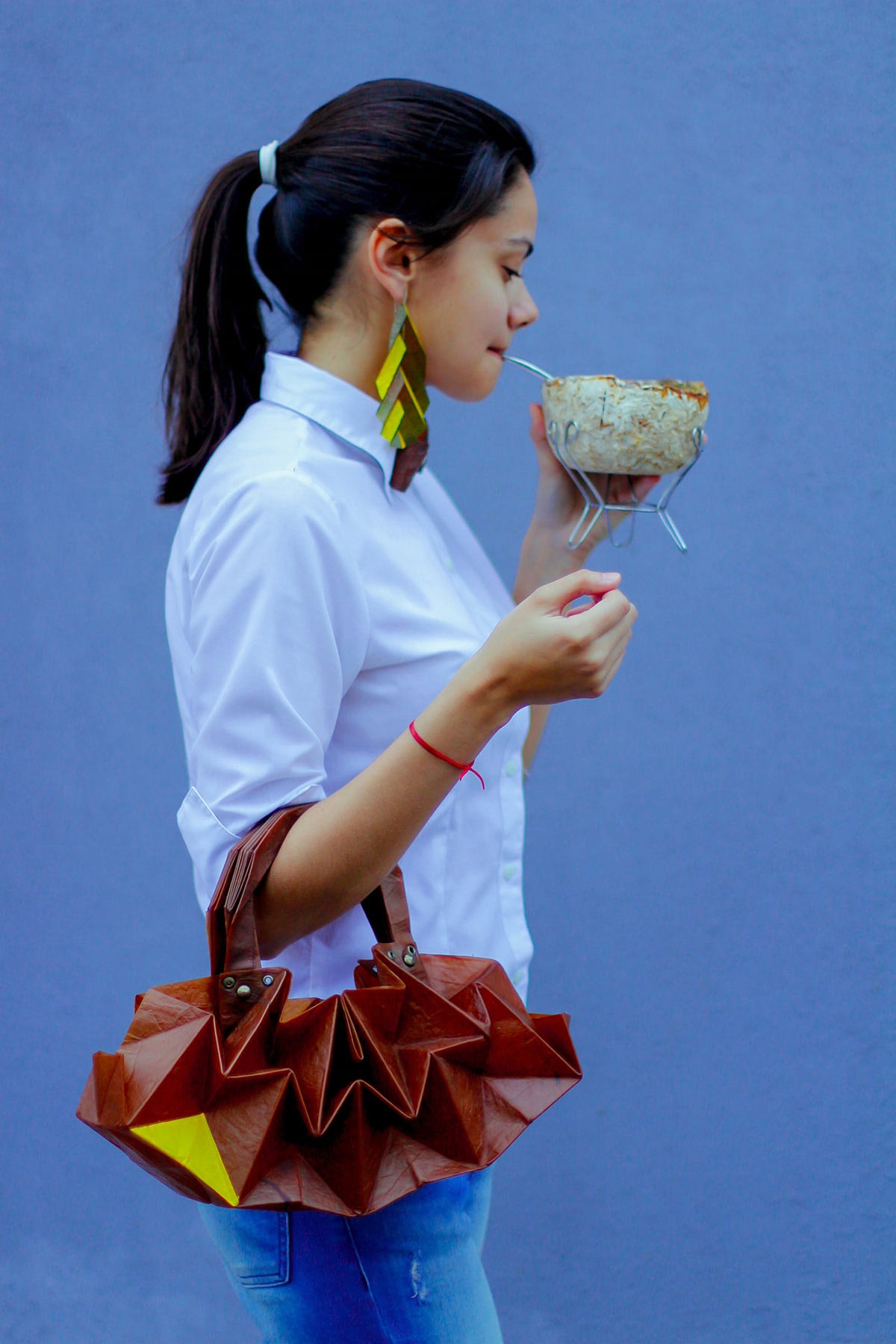 The work of the designer

For a few months, Tinello settled in Buenos Aires, where he continued to research and sell his products on the internet. He says that in other countries people are more receptive and there is more awareness and a better market for these products. 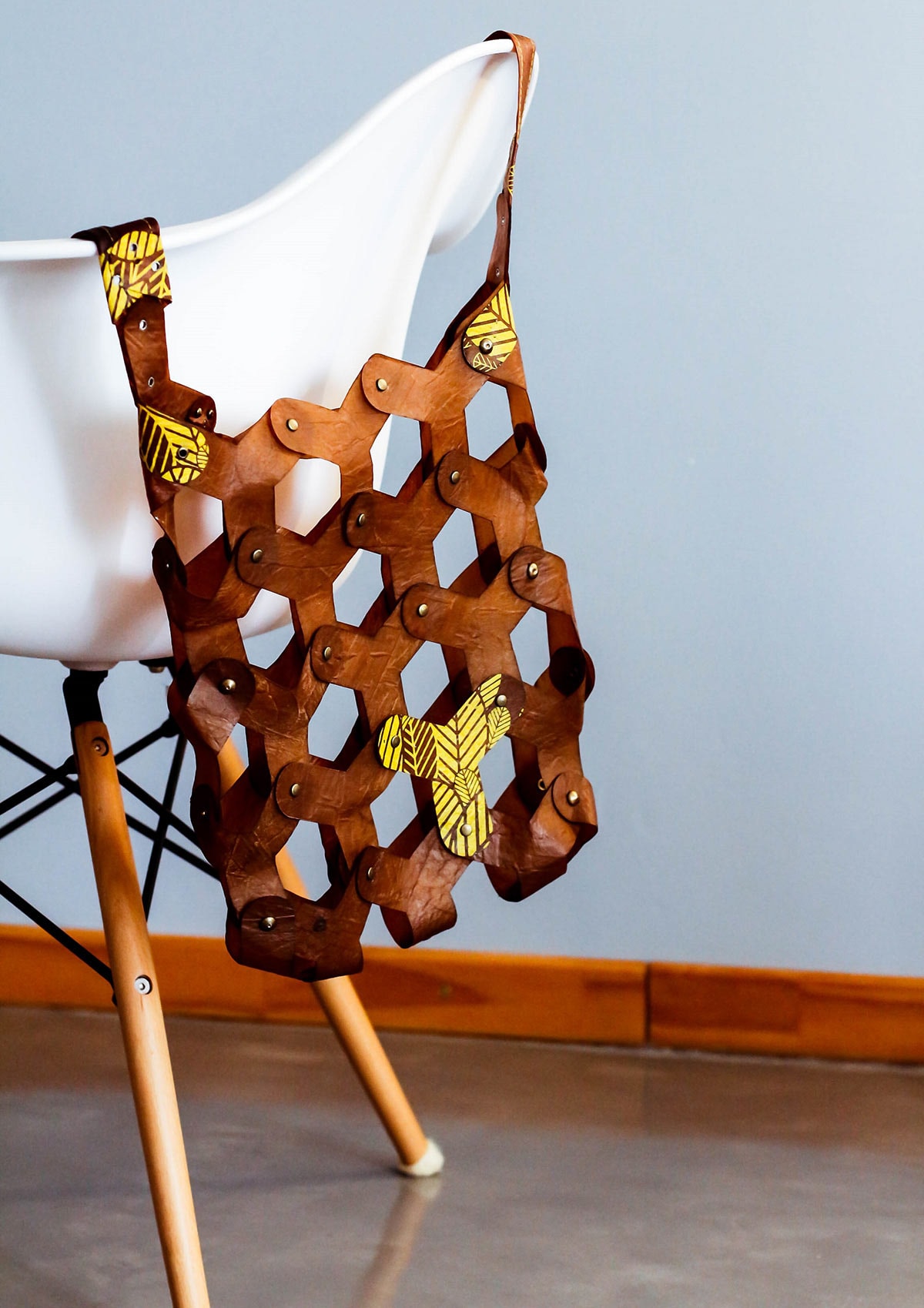 In a short time, Tinello has achieved recognition both locally and internationally. Some of his creations can be seen in the “Animalia” exhibition, which is being held at the National Costume Museum. He is also in charge of the chair of sustainability of the Design career at the University of San Andrés where he teaches biomanufacturing. He was also contacted by the culture area of the city of Buenos Aires to give workshops in poor neighbourhoods.

Tinello is also showing his piggy bank in the “Food bigger than the plate” exhibition at the Victoria and Albert Museum in London.

This story was originally published in Spanish at FashionUnited.ar