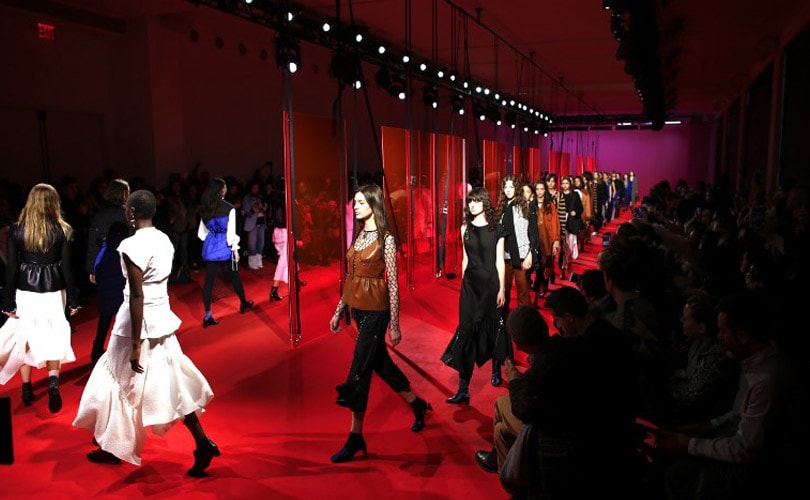 New York Fashion Week has just two days left before the spring/summer 2018 season moves to Europe. From Flamenco ruffles to hot pink and plus-size lingerie, here is a quick round-up from the catwalk Monday.

The Dominican-born master died three years ago and the current creative duo in charge of the New York society favorite, Laura Kim and

Garcia, brought the label back up to date. Their models sailed down an escalator, before lapping the catwalk, introducing denim to a brand better known for its delicate evening wear and fan base among the ladies who lunch set. 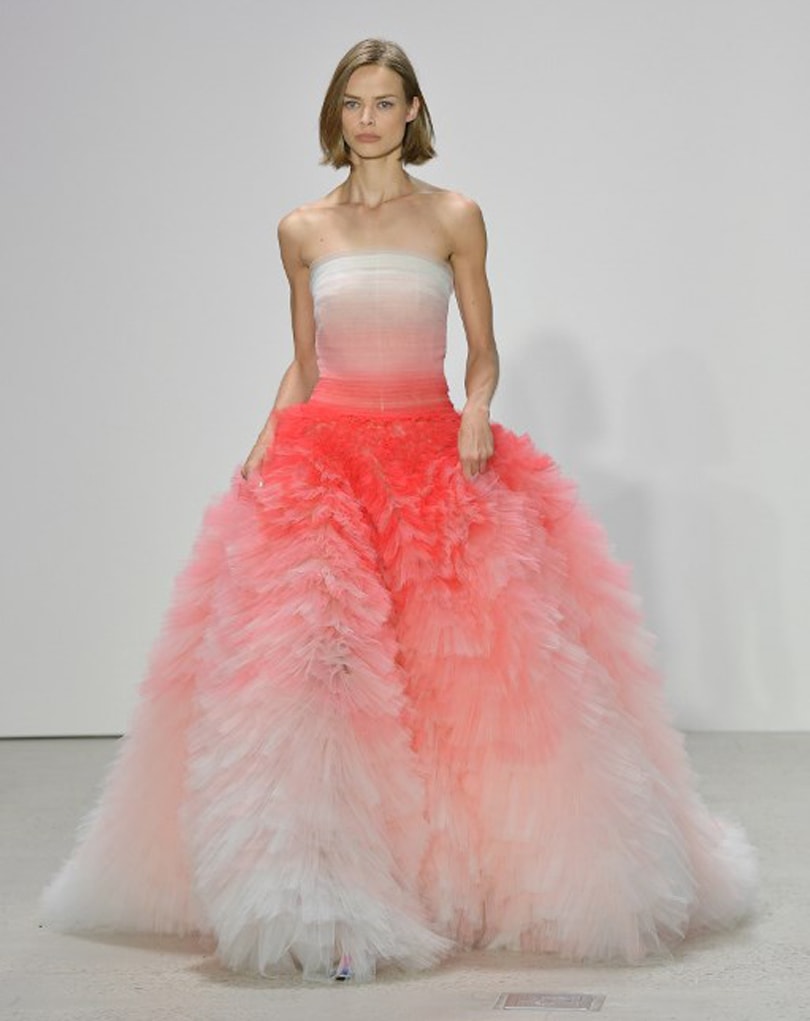 There was an elegant white fur coat covered in the founder's distinctive black signature, colored sequined letters spelling out OSCAR spunked up a white princess ball gown and a white T-shirt. Tulip motifs were also pervasive, with sequined tulip applique and tulip-cut waists on the skirts of evening frocks to accentuate tiny waists. There was lots of on-trend hot pink, paired with red for a younger, hipper look. And boxy 1990s-style jackets were also on show.

Evening was a riot of sequins with some 1950s-style full tulle skirts and ruffles flamenco-style. Theirs was also a rare fashion house in acknowledging the date, paying tribute in a note to the 16th anniversary of the September 11, 2001 Al-Qaeda attacks that brought down New York's Twin Towers.

The Museum of Modern Art's sculpture garden provided a spectacular backdrop for an outdoor runway show from the famed New York designer born and raised in Venezuela. 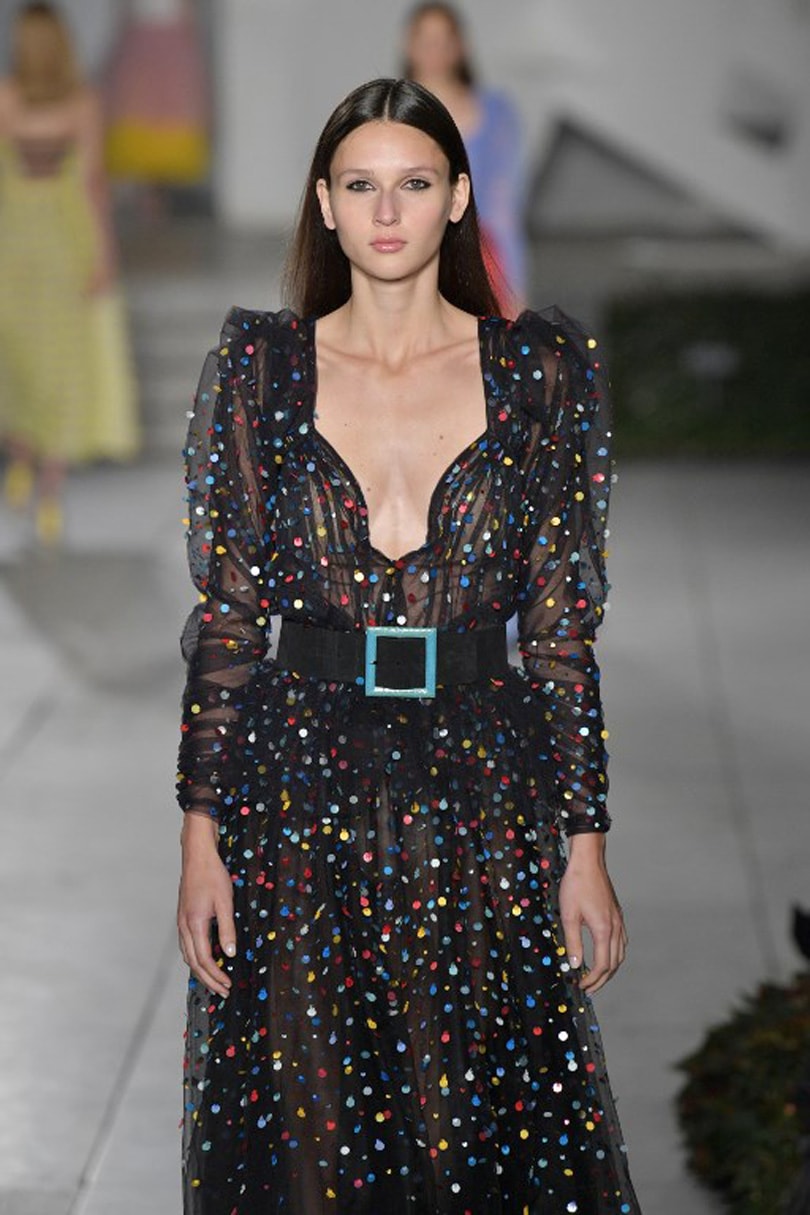 Bright colors popped off models, and spring/summer was imagined in all the colors of the rainbow from hot pink, to sunshine yellow with big sashes and puff sleeves all done with timeless Herrera elegance. Hemlines were long, skirts full and there was plenty of check for an innocent, playful and highly feminine collection.

The Phillip Lim woman was a woman in command. The Californian designer of Asian heritage mixed 1990s-inspired minimalist silhouettes with rugby shirts and the Spanish world of flamenco. "It was like: ok, these are the things I love and here they are," Lim told AFP. "At times I felt like, 'Oh my God, how are we going to make this make sense?'" There were tailored pants, dresses in navy pinstripes, and flamenco's famous flounces appearing on tops and dresses. "It felt modern to me," he said.

The French retailer showed off crumpled leather and camouflage for a rock-chic look, happy to embrace New York for a second season at a time when creative American talent is decamping to Paris.

"We seduced Europe and now we want to really seduce America," artistic director Cecilia Bonstrom, 47, said in an interview. "We come here because we love this energy, this aesthetic and, above all, it's a real melting pot with such different people."

Maria Cornejo, who has dressed Michelle Obama, celebrated the 20th anniversary of her geometric and minimalist label, with a joyful, high-spirited collection starring fuchsia, bright orange and red. A poem by her husband, photographer Mark Borthwick, was re-imagined on cotton poplin. Cornejo, who is also politically active, distributed an American Civil Liberties Union ribbon to guests.

Star curve model Ashley Graham unveiled her latest lingerie collection for Addition Elle, the Canadian label whose runway show featured only plus-size models, treated to a rock-star reception from the audience. "I wanted her to feel sexy for her everyday bra," Graham told AFP of her customer.

Turkish designer Numan Ataker presented a stunning collection in largely black and ivory, with clever wicker quilt detailing and golden sail rope embellishment and belts. The show was inspired by the Black Sea region of Turkey and choreographed to honor the victims of the 1986 Chernobyl nuclear disaster. American singer Paula Abdul sat in the front row.

Startup label Paxyma strives to be 100 percent vegan, cruelty-free and sustainable. Everything is unisex and unisize, so that they can be worn year after year, and passed between men and women. Leather and silk are out. There was lots of cotton and man-made fabrics such as nylon, with an exception made for wool, as sheep are only shaved, not killed in the name of their coats. "The fashion industry is the second largest polluting industry after petroleum," said co-founder Ramin Paksima. (AFP)

The international Fashion Week season for women's ready-to-wear kicks off in the month of September, with all eyes set on New York, Paris, London and Milan for next seasons latest trends. For all the women's wear catwalk season must reads, click here.
Carolina Herrera Oscar de la Renta womenswearcatwalkseason