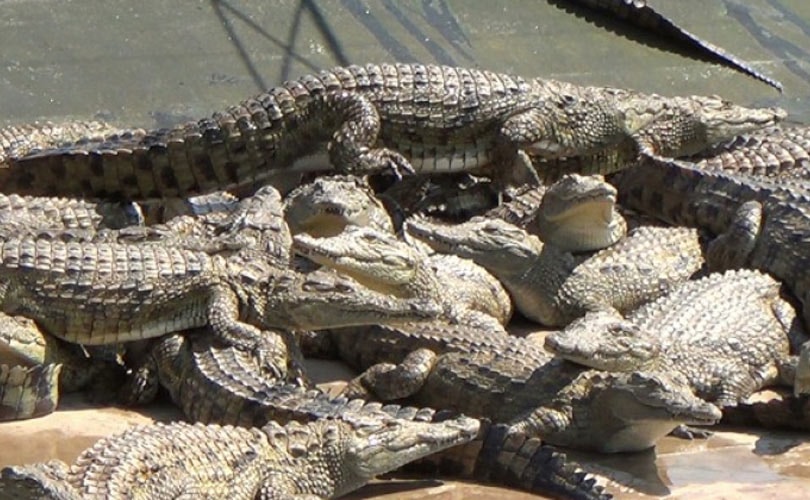 London – Hermès Birkin handbags have enjoyed something of a cult status for a long time now. A fuchsia-colored crocodile-skin Birkin bag recently broke all records and became the most expensive handbag sold in auction at Christie's, selling for an astonishing 222,912 dollars. But most consumers remain in the dark in regards as to how the handbags are made - and where the exotic crocodile and alligator skins come from.

In spite of Hermès claims in its 2014 Annual Report that they are "an attentive, concerned and committed company which conducts its business in a way that respects its ecological, social, economic and cultural environment," a new exposé released by animals rights organization People for the Ethical Treatment of Animals (Peta) focused on farms that supply crocodile and alligator skins to Hermès-owned tanneries reveals the disturbingly horrific conditions in which the reptiles live and die in. The undercover reportage uncovered several cases of direct animal abuse and cruelty, as well as violations of US state and federal laws at an alligator farms in Texas and Zimbabwe.

At the Lone Star Alligator Farms in Winnie, Texas, alligators and crocodiles are trapped inside barren and overly crowded pits for up to nine months before being killed for their skin. A US Peta investigator filmed workers shooting alligators in the head, some multiple times, with a captive-bolt gun and viciously hacking into the back of their necks with a box cutter in an attempt to server their blood vessels in a crude effort to kill them. Footage showed many animals surviving the appalling attack and still moving in ice-water bins for several minutes. 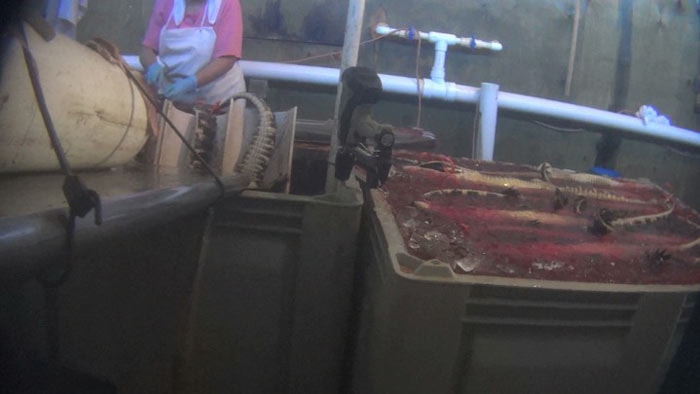 When the captive-bolt used to stun the alligators seemed to malfunction, the facility manager told workers to cut into the hundreds of still conscious alligators and attempt to dislocate their vertebrae using the blade and then forceful stick a metal rod up their spinal columns to try and scramble their brains.The manager later told the investigator that even the successful dislocation of an alligator's cervical vertebrae will not kill the animal and that the reptiles will continue to live unless pithed with a pithing rod. In spite of the reptiles being restrained, they still moved their limbs and tails when being cut into.

According to Hermès, "the group selects suppliers who are at the forefront of their speciality, and who are exemplary not only in terms of the quality of their products and services but also in their social and environmental policies." However, judging by the footage captured by Peta US investigator, it would seem that the luxury brand has failed to uphold its strict selection process of suppliers. "Hermès wants consumers to believe it's in the luxury business, but behind every Birkin and Kelly bag is a lifetime of misery and violent death," commented a spokesperson for Peta UK to FashionUnited. "Once consumers see how alligators were hacked with a knife – in some cases, while still conscious and able to feel pain – or live in filthy, barren concrete tanks until they're stripped of their skin, most compassionate shoppers will want nothing to do with a brand that profits from such cruelty." 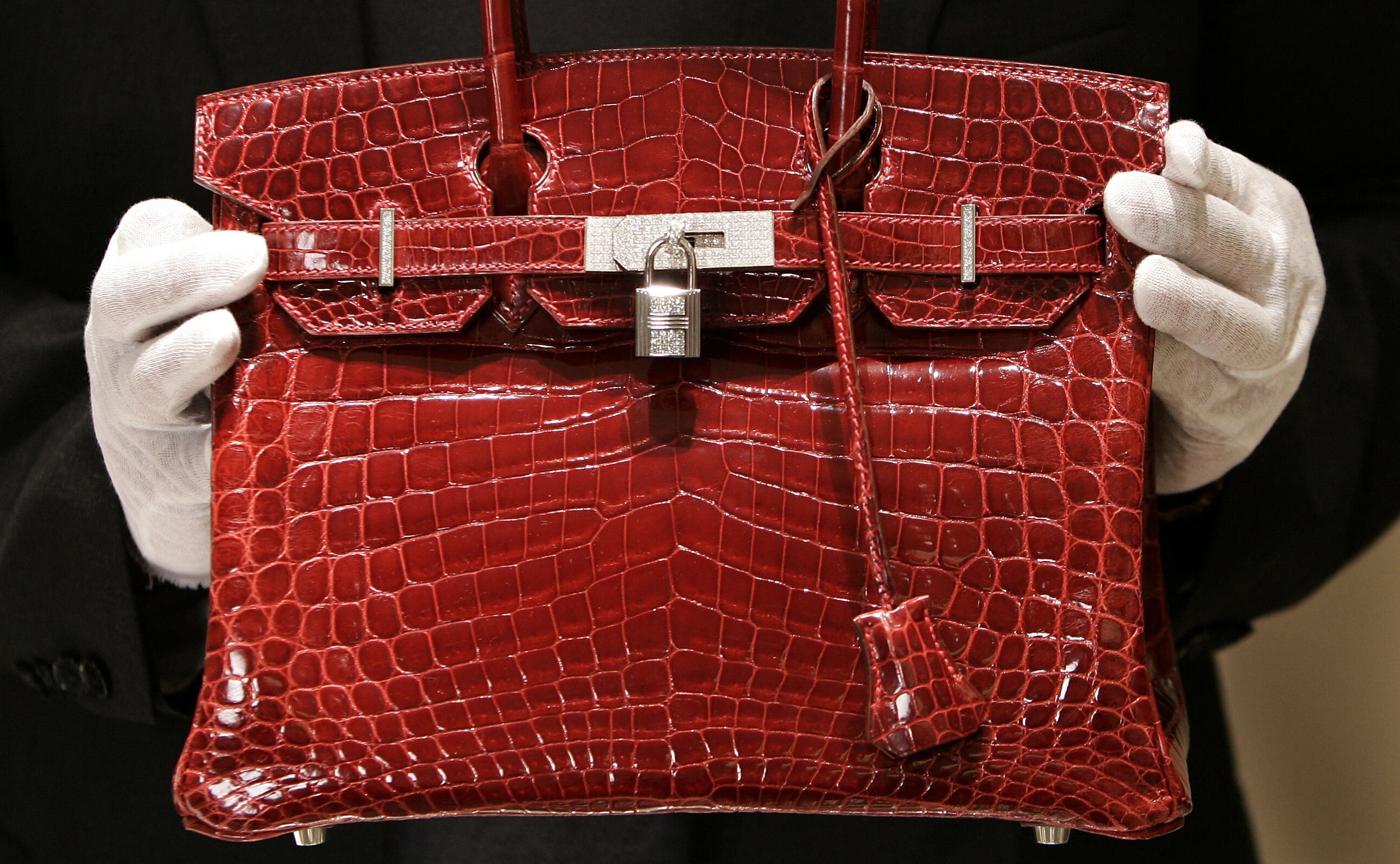 In addition to the footage captured on the reptile farm in Texas, film footage from Padenga Holdings crocodile farms in Kariba, Zimbabwe, one of the largest Nile crocodile-farming operations in the world and another of Hermès's exotic skin suppliers, shows concrete pits filled with as many as 220 crocodiles without adequate water and/or dry land. The company reportedly owns 50 percent of the Texas business. "Peta’s exposé of Hermès’ suppliers in the US and Africa reveals that every Hermès watchband or Birkin bag means a living, feeling being experienced a miserable life and a ghastly death," said Peta Director Mimi Bekhechi. "People pay thousands of pounds for such accessories, but the reptiles on these cruel and disgusting factory farms are paying the real price."

Peta is currently asking all of its supporters and anyone who shocked at the luxury label's treatment of reptiles to contact Hermès and ask them to stop selling items made from crocodile and alligator skins. In addition to requesting Hermès halt its sales of exotic animal skin products, Peta US is also "purchasing stock in Hermès in order to present shareholder resolutions asking for improved conditions for animals at its supplier facilities as well as more humane handling and slaughter methods," added the spokesperson.

"Peta US is also purchasing shares of Padenga Holdings Limited to request that crocodiles are shot with a captive-bolt device during the attempted slaughter. Since Padenga owns 50 per cent of Lone Star Alligator Farm, Peta US will also request that alligators are slaughtered with a properly functioning captive-bolt device and by properly trained workers, that the housing conditions for the alligators are brought up to code and that workers receive protective equipment. Peta has submitted detailed complaints and evidence to local, state and federal agencies, and confidential investigations are underway."