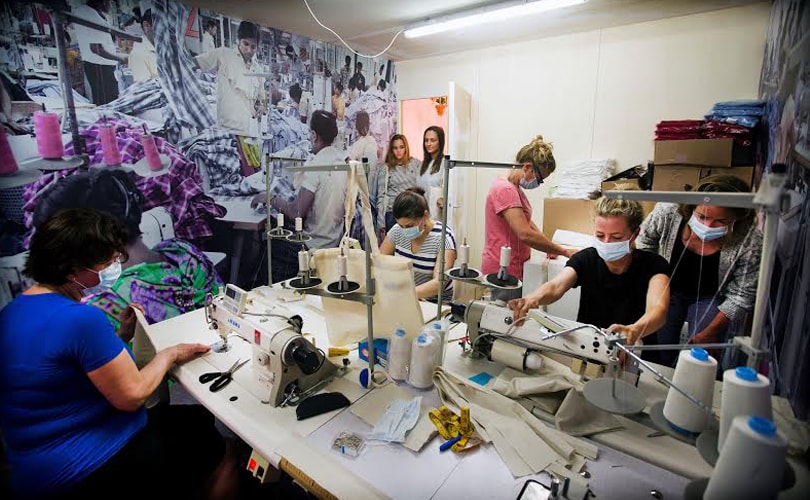 The Mad Rush brings the ‘sweatshop’ to the high street

A new concept, store is set to open its doors today on the popular shopping street de Kalverstraat, in Amsterdam known as the Mad Rush. A cute window display featuring cacti alongside of trendy and fashionable items from high street retailers underneath a discount sign ensures that the Mad Rush is certainly appealing to consumers. However, what sets this fashion concept store apart from the rest is what is waiting for consumers behind the erected walls: a sweatshop. But then again, the Mad Rush is hardly your average concept store. 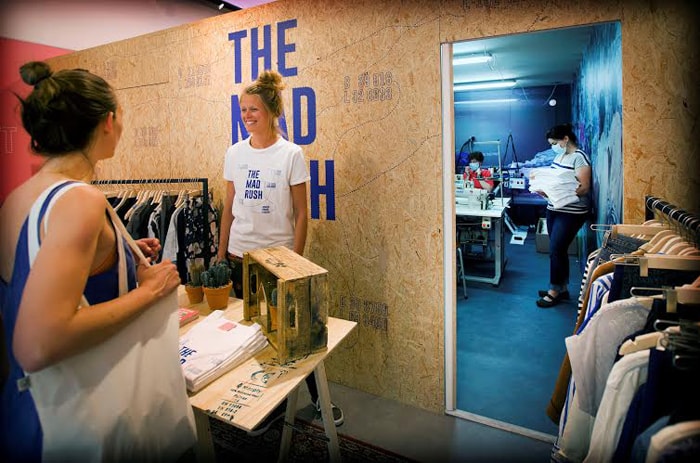 By bringing a sweatshop to the high street and placing consumers face to face with the reality of their fashion purchases, the Clean Clothing Campaign (Schone Kleren Campagne) and international women’s fund Mama Cash aim to raise awareness for the plight of the industry’s garment workers. Although conditions in some regions of the world are improving, the fact remains that millions of garment workers - who are predominantly female - are forced to work long hours in unsafe conditions, with little to no regard for their health and low-wages in order to produce mass-market fashion items for the high streets. The Clean Clothing Campaign and Mama Rush seek to change this with the help of unsuspecting shoppers who visit the concept store. 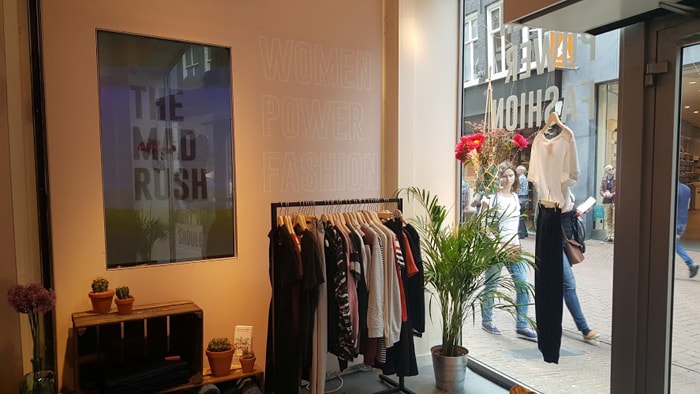 Once consumers have selected an item they wish to try on (pieces which can be found in adjacent stores) an attendee escorts them through to the fitting room. However, behind the door lies a sweatshop, filled with ‘workers’ working behind sewing machines in a overheated and overcrowded room with no windows. The claustrophobic room offers consumers a small taste of what an actual sweatshop thousands of miles away in Bangladesh or India feels like and is guaranteed to leave shoppers feeling very unsettled. “Fashion is moving at an increasingly faster pace, which is leading to increasing production rates. We wanted to confront Dutch consumers with the consequences of this,” explained Tara Scally, campaign coordinator at the Clean Clothes Campaign to FashionUnited. 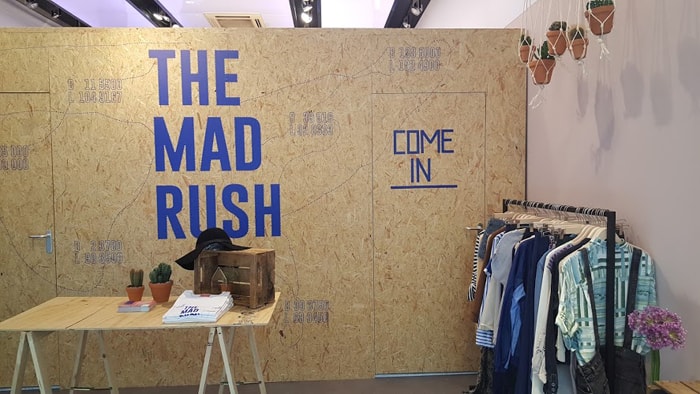 After consumers walk through the sweatshop, which is filled with the rattling of sewing machines, they step into an open space dedicated to sharing knowledge on what they can do to make a difference. For this campaign Mama Cash and the Clean Clothing Campaign have joined forces and created the slogan ‘WomenPowerFashion’ to generate attention for the worldwide plight of garment workers. In order to give the campaign a human face, three garment workers have been selected by the NGOs to share their stories of how they fought to obtain the rights they deserve within the industry’s supply chain. Each women represents themselves, a trade union they founded and their demands for a safer workplace and their stories are shared in the exhibition space behind the sweatshop through images and film. “We wanted people to learn more about the ‘WomenPowerFashion’ and what they can do to make a difference,” said Barbara Lotti, programme officer at Mama Cash. “We want to show that people can bring on change and make a change.”

The organisations have ensured that together with the volunteers working in the sweatshop, a representative from Mama Cash and the Clean Clothing Campaign will be on hand to guide shoppers through the experience. “We have a wall of tips featuring what consumers can do to make a difference,” continued Scally. “One of the most important things they can do is ask fashion retailers questions about how their clothing was made and show that working conditions are important to them.” In addition to questioning the origins of their clothing, shoppers are also encouraged to think about how they treat their clothing and shown how they can use it in a more sustainable way. Starter packages to initiate home clothing swapping parties are present for example, as well as tips as to what to do with unwanted clothing. 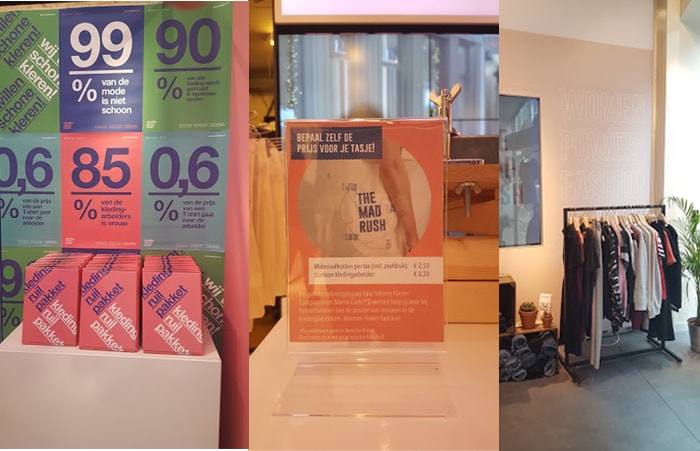 In order to raise even more awareness a team from Vigics is also on hand filming behind the scenes reactions to the sweatshop for a documentary named Naald en Daad highlighting the struggles of shopping ethically and sustainably. “The team from Vigics contacted the management of the store space looking to rent it out for a similar concept,” explained Ester Serrano, Communications Professional freelance, who thought up the concept together with her colleague Susanne Kuiper, the Clean Clothing Campaign and Mama Cash. “So when they found out what we were planning on doing, they asked to join in and film shoppers reactions to the sweatshop and then question them afterwards on their thoughts on fast fashion.” 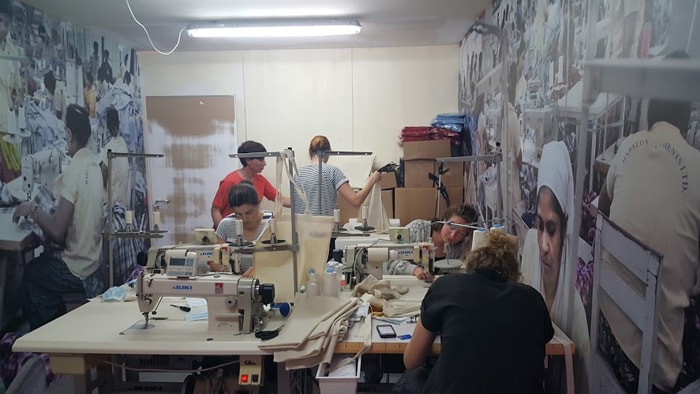 Shoppers who visit the store/sweatshop do not have to fear leaving emptied-handed, for next to tips and guidance on how to support the campaign to make a real difference, the volunteers in the sweatshop will be busy making canvas bags for sale. “The bags will be made over the week while the store is open and then shoppers can decide for themselves how much they want to pay for them,” said Scally. "All proceeds from the bag sales will go to WomenPowerFashion campaign," added Lotti. A small sign in the back of the store indicates that the materials to make the bag cost 2,50 euros, whilst normal labour wages for garment workers making the bag is 0.20 cents per hour - another shocking reminder of why eye opening concepts like the Mad Rush are needed.