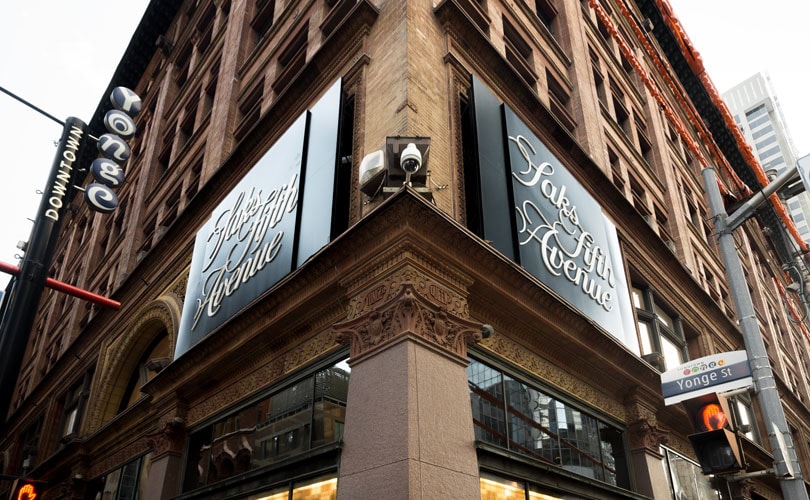 "The opening of our first store in Canada is a significant milestone for our company,” said Richard Baker, Governor and Executive Chairman, Hudson’s Bay Company. “International expansion is a key driver of our growth strategy and we continue to explore opportunities to expand our global footprint."

2015 was at times an exciting yet tumultuous year for HBC. In September, the brand cut 265 jobs in an attempt to restructure and cut costs. Despite the loss in staff, that didn't halt their plans for moving forward with expansion and growth.

The company has announced plans to open a new Saks Off 5th outlet store in Midtown Manhattan, and they have also announced that they are considering expanding Off 5th by entering the European market. In late December, HBC began talks to acquire flash sales site company Gilt Groupe. By January of 2016, HBC and Gilt Groupe reached an agreement where the latter would be acquired by the former for 250 million dollars.

The entrance of Saks Fifth Avenue into the Canadian market is all part of the company's larger international expansion plans. Hudson's Bay made its way into the European market in 2015 with the acquisition of Germany-based Galeria Kaufhof, which operates Germany's leading department store Kaufhof, sporting goods retailer Sportarena, and Galeria Inoo, which is Belgium's only department store.

In Canada, Saks will have some tough competition to face from luxury department store Holt Renfrew. The latter department store chain has long had the monopoly on the Canadian luxury department store scene, so, it will be interesting to see how they adapt to a major competitor like Saks entering their market. Suppliers for Holt Renfrew might maintain their exclusive partnerships with them for now, but it's not out of the question that they could defect over to the larger and internationally growing Saks Fifth Avenue chain.