An unprecedented disruption of retail, production and trade like the current one could send the European textile and apparel industry into a tailspin. In its recent report “Bruised but not beaten, Europe’s textile industry is a perfect candidate for a greener and digital recovery”, credit insurance company Euler Hermes predicts turnover to fall by 19 percent in 2020 and up to 8 percent of total industry employment and 6 percent of companies - about 158,000 jobs and 13,000 companies - to disappear by the end of 2021. FashionUnited wanted to know more about this grim prediction and talked to one of the study authors, Aurélien Duthoit, Euler Hermes’ sector lead for retail, technology & household.

Collecting and analysing EuroStat data for different European countries and correlating it with employing data and looking at past recessions, Euler Hermes arrived at the figure of potentially 158,000 being lost and about 13,000 companies having to give up, despite the major relief provided by the various job-retention schemes and abundant funding.

The good news is that by next year itself, things could considerably improve: “We expect turnover to bounce back by about +15 percent in 2021 and return to pre-crisis levels only in 2023, assuming a progressive easing of the global sanitary emergency and substantial fiscal and monetary support to the economy,” finds the report. 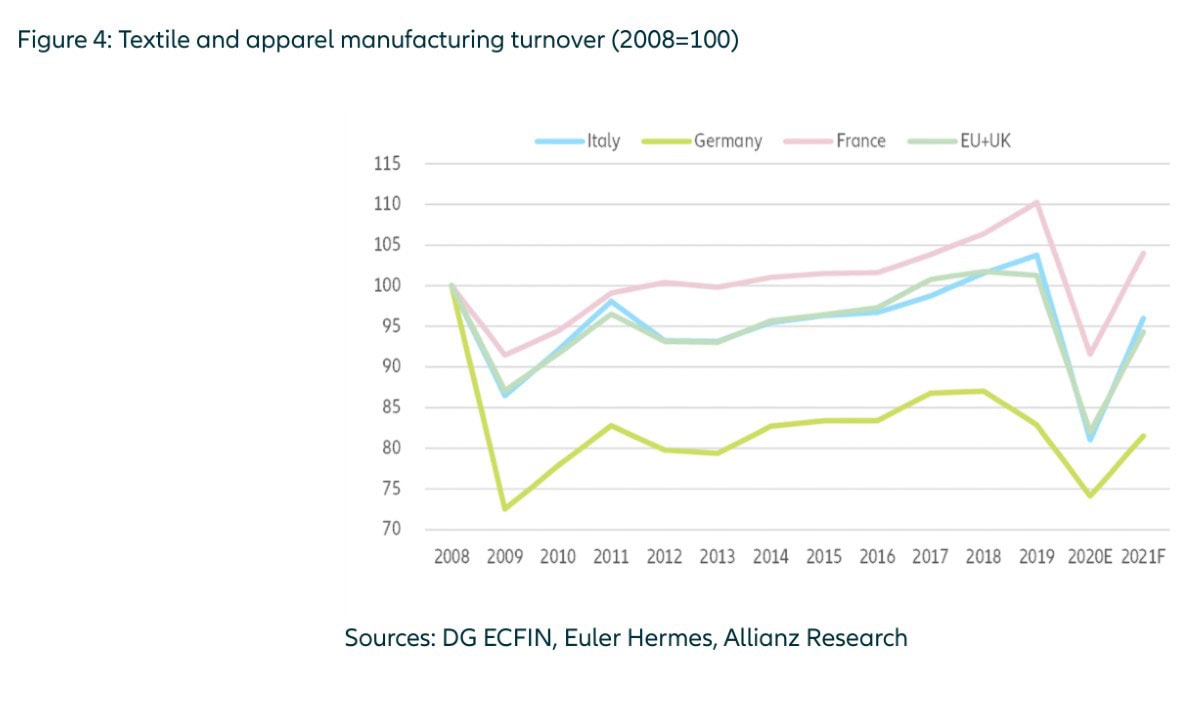 While technical textiles - for example those used in the aerospace sector - have been affected by the slump, it is the fashion sector, which relies on consumer spending and consumer confidence, that is affected more. “Looking at clothing retail, it is currently the worst affected. We are not seeing a strong rebound as with other products like furniture, computers and smartphones,” confirms Duthoit after checking recent data.

While strong European economies like the UK, France, Italy and Germany are still deep in the red, the latter two could recover faster with Germany having had a less dramatic start to 2020 than other countries and Italy relying on a huge trade network that includes Europe and Africa apart from Asia.

Import substitution is another keyword: “A 10 percent decrease in French and German imports of apparel would represent the equivalent of an 8 percent boost in European apparel manufacturing turnover. Efforts to encourage a transition from linear to circular manufacturing practices could also yield substantial opportunities for the local manufacturing base,” so the report.

For fashion, the problem seems to be the consumer sentiment, there is less of a mood to buy it, at least to the extent as before. “In the Netherlands, there was no closure of non-essential stores but fashion sales were down by 19 procent for January through July. Fashion is the only segment of retail that is still negative,” says Duthoit, adding that “more precise information is needed to determine the sector’s medium-term potential.”

Is digitisation the answer?

The big question is how the fashion industry can indeed come out of the slump. “For the areas that could provide some relief - sustainability, digital - there are medium-term challenges. Also, the wider economy needs to return to normal and that will not happen till 2022,” predicts Duthoit.

“The Internet is not enough to compensate for the crisis,” he cautions, pointing to online retail figures that, though they are booming - with a plus of 16-17 percent year-on-year in Germany, for example - they cannot fill the void left by missing retail sales in stores. “This is true even for early adopters of online strategies like Zara; though an online presence was there during the lockdown, it was not enough to make up for lost in-store sales. In addition, return rates are high and despite online growth success, this prevents profitability.”

Last but not least, given that sustainability is hailed as the need of the hour, how likely is it that the textile industry will indeed become greener and not just go back to old patterns? “This would be coming from new companies,” says Duthoit. “It is happening in France with very specific products or those that are 100 percent made in France.” 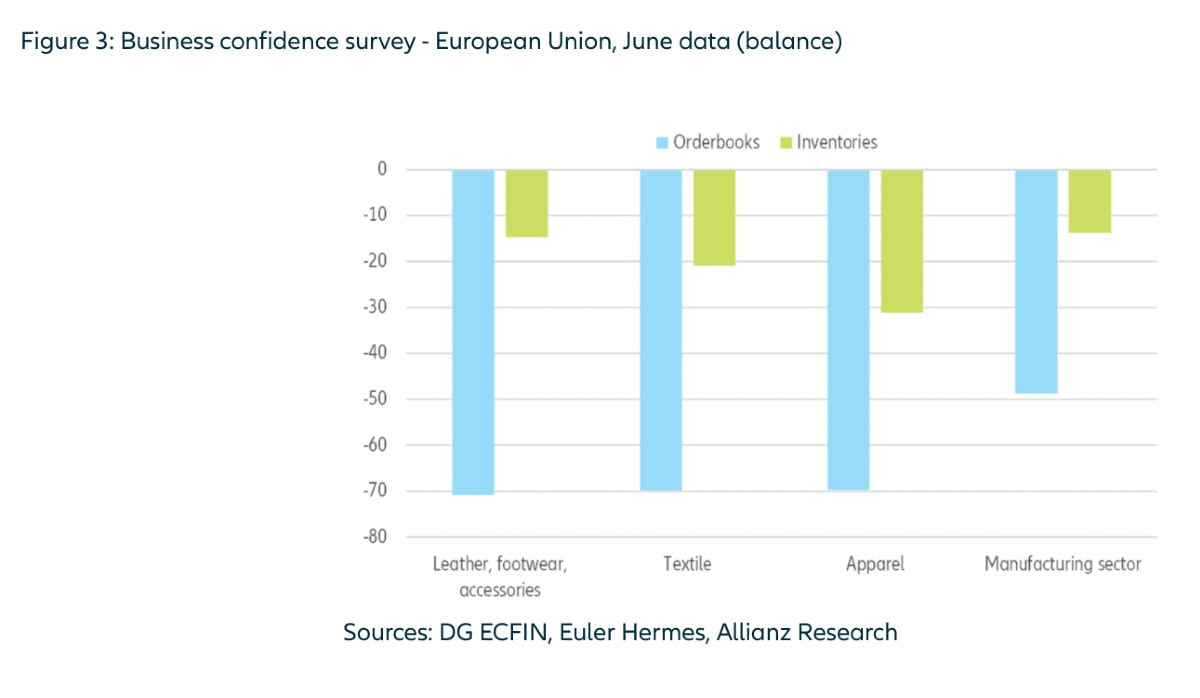 Is a greener textile industry likely in the future?

A greener textile industry would place greater emphasis on quality rather than quantity, finds the report, and points to the case of Italy, where the aligned interests of consumers, retailers and manufacturers have allowed the country to keep a preference for more expensive, yet higher quality and locally made apparel, which sets an example for the rest of the region.

“For established players, becoming more sustainable is hard because that would require business model innovation. Especially for fast fashion, which relies on volume and may try to incorporate more recycled fibres, but the textile industry is at the very early stages when it comes to organic fibres and usings standards like Oeko-Tex and others. Shifting business models cannot happen overnight. Thus, the ‘greenification’ of the industry is coming from new players,” sums up Duthoit.