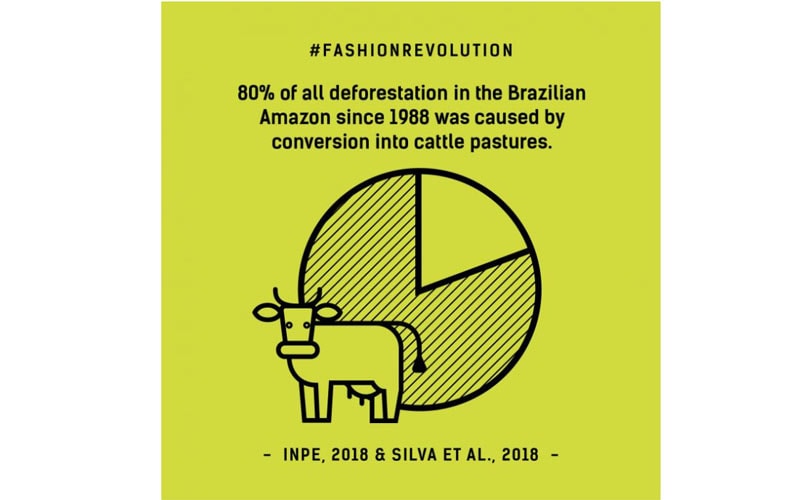 The VF Corporation, parent to brands like Timberland, the North Face, Vans, Dickies and Kipling, announced on Friday that it would no longer source leather from Brazil due to environmental concerns. From 1st January to 20th August 2019, fires in the Brazilian Amazon have increased by 84 percent compared to the same period last year according to data from the National Institute for Space Research (INPE).

"VF Corporation and our brands have decided to no longer directly source leather and hides from Brazil for our international businesses until we have the confidence and assurance that the materials used in our products do not contribute to environmental harm in the country," said the company in a statement according to ABC News.

The company also informed the Center for the Brazilian Tanning Industry (CICB) about its suspension of leather purchases from the country on account of the fires. In a letter to Brazil’s minister of agriculture, the CICB president conveyed his concern about VF Corp.’s decision.

The cause of this massive burning of the Brazilian Amazon are most likely ranchers who clear land for their cattle, not only producing beef but also leather. “Brazil is the second biggest exporter of beef supplying 20 percent of the world’s beef (second only to America). It follows that Brazil’s cattle rangers are supplying the same proportion of the world’s leather,” according to Fashion Revolution.

“The fashion industry must take responsibility for the leather handbags, shoes and accessories contributing to the deforestation of the rainforests,” demands the advocacy group, calling brands to be transparent about how they are sourcing leather from Brazil and making sure it is not connected to the country’s cattle ranches.

As this can be difficult, more brands and retailers may follow VF Corp.’s example and stop sourcing leather from Brazil altogether. Sportswear brand Nike for example has already taken steps to ensure that their materials are not supporting the deforestation of the Amazon after the 2009 Greenpeace report “Slaughtering the Amazon” shed light on the lengthy trails of beef and hides from Amazon slaughterhouse to retail shelves worldwide.

Environmentalists blame Brazilian president Jair Bolsonaro for the massive increase in deforestation and fires in the Amazon this year as the ultra-right head of state who questions man-made climate change is closely allied with the Brazilian agricultural lobby and has relaxed environmental requirements: Brazilian farmers have recently been allowed to burn 20 hectares instead of five. In addition, the authorities meant to prevent illegal deforestation have lost power under Bolsonaro.

Due to international pressure, Bolsonaro issued a decree on Wednesday prohibiting the burning of land to open up pastures and arable land for 60 days. However, experts criticise that the ban comes too late and is not far-reaching enough. Plus, there was a change made to it already on Friday, excluding fires outside the nine states of the Amazon region that are necessary and approved for harvesting from the ban.

Last Monday, luxury conglomerate LVMH’s CEO Bernard Arnault and Yann Arthus-Bertrand, member of LVMH’s board of directors, announced that LVMH would join French president Macron and the G7 initiative by contributing 10 million euros to help fight the wildfires that are ravaging the Amazon - an offer that the Brazilian government has since rejected.