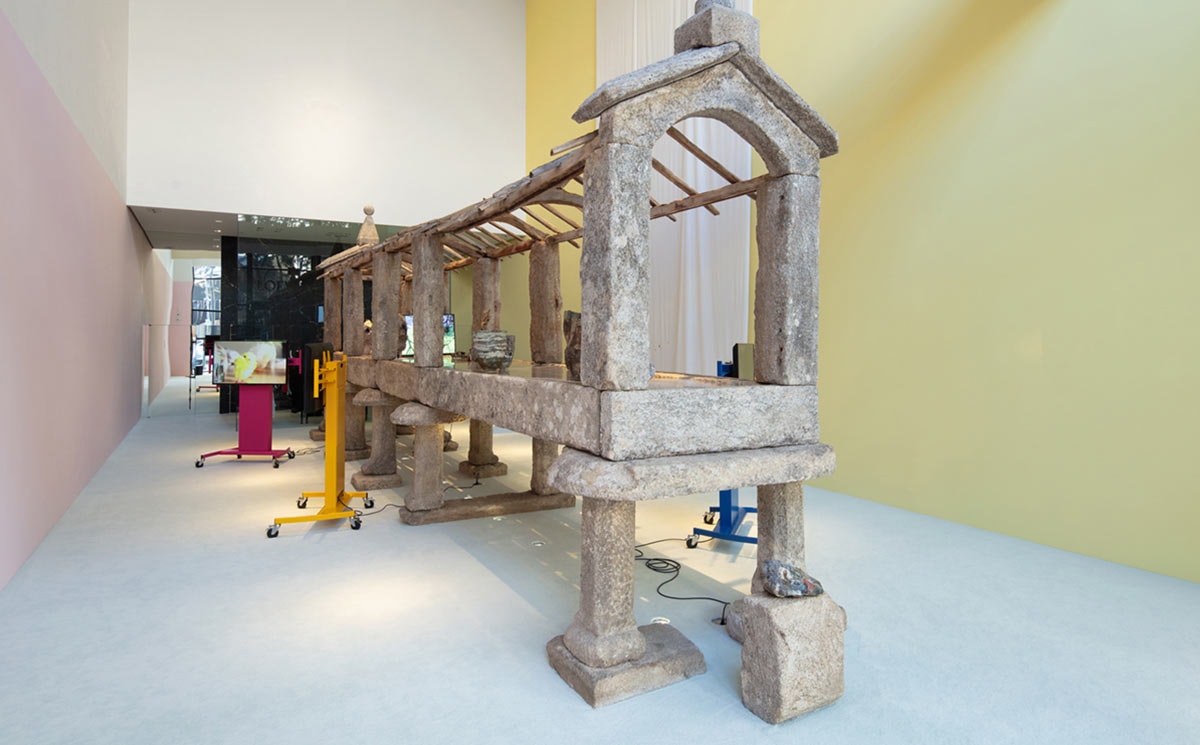 This week the inaugural art festival, Art Basel Miami Beach, has been taking place. The event brought together more than 250 of the main art galleries from all corners of the world beginning on December 3 and ending on December 8. The event draws in more than 70,000 visitors during a week dedicated to art lovers and collectors, that also has no problem attracting the attention of major fashion brands and fashion houses. They see Art Basel Miami Beach as the perfect opportunity to approach buyers of high purchasing power, while managing to link their image to the elite and refined world of art.

Since the Art Basel fair decided to expand beyond the historical borders of the Swiss city of Basel, where it was founded around 1970, and decided to make Miami Beach its second home, many fashion brands have made it an increasingly important time on their calendars. Well known brands involved with Art Basel this year include Bottega Veneta, Loewe, Versace, Miu Miu, Chloé and Gucci, who all used the five day festival to have exclusive presentations, parties, and to sell collectors products. 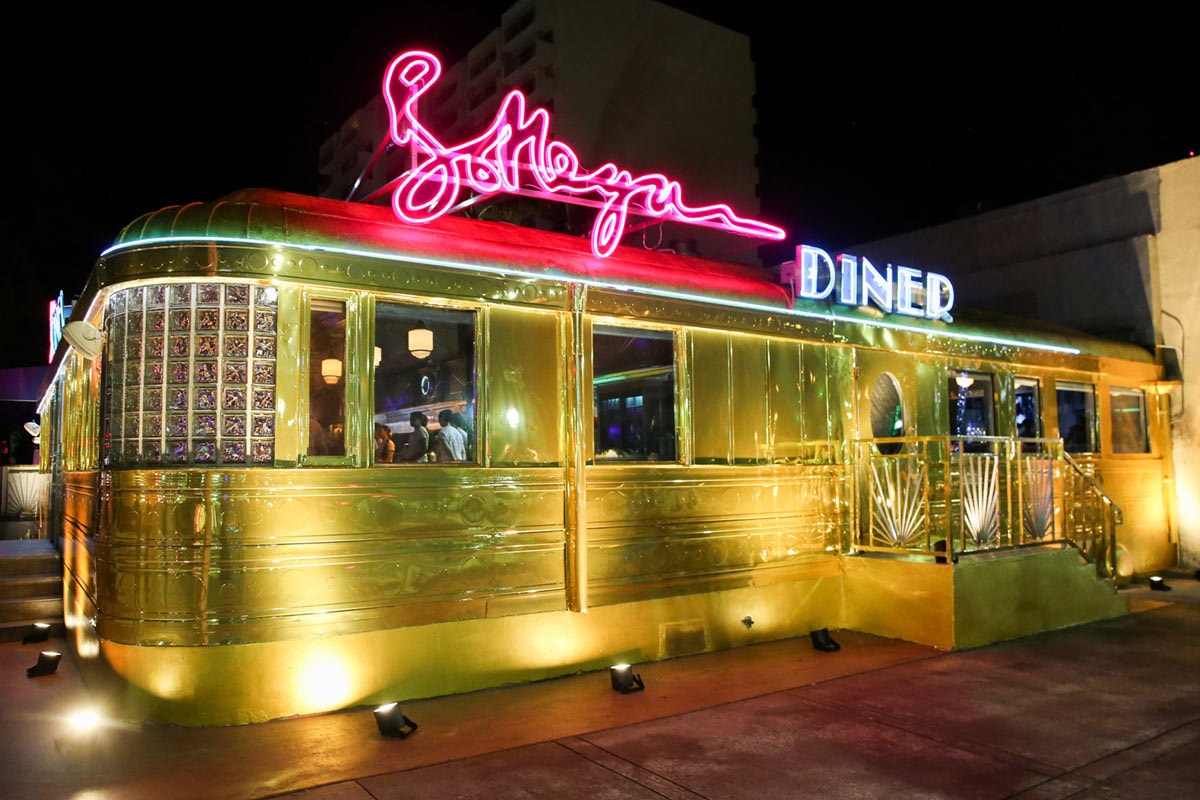 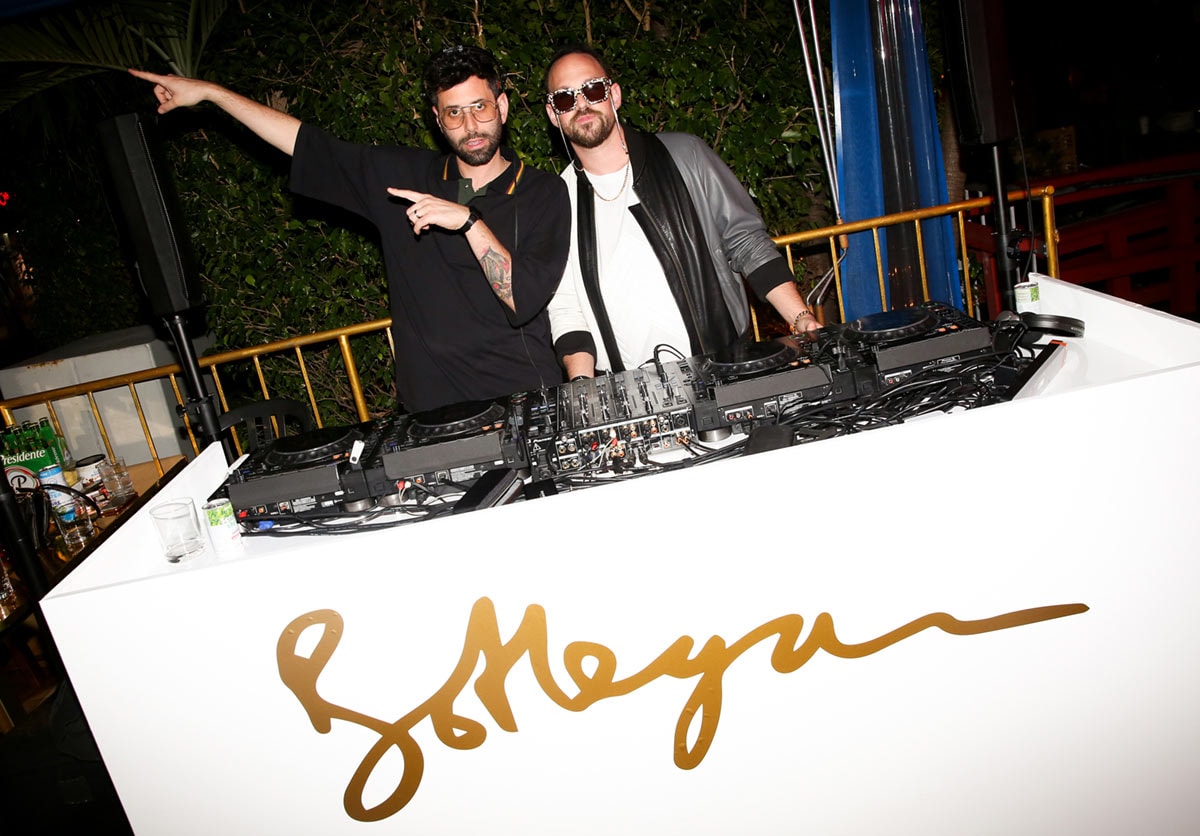 Bottega Veneta's pop-up restaurant After winning big at the British Fashion Awards, which were presented in London earlier this week, Bottega Veneta and its creative director Daniel Lee packed their bags and headed to Miami. To coincide with the celebration of Art Basel Miami and to commemorate the opening of the brand's first store in the Design District, Bottega Veneta decided to open the pop-up "Bottega Diner", a restaurant that will remain open exclusively from 4 to 14 December.

Located at 11 Diner Street in Miami Beach, the restaurant will be open 24 hours a day, and inside, customers who come to the restaurant will be able to enjoy a whole range of exclusive products. Everything from hamburgers to paper straws, napkins, coffee mugs and matches are all specially designed by the brand. "I wanted everyone to be invited to our opening in Miami," said Daniel Lee in a statement. "The Bottega Diner mixes classic American style with extravagant Italian gold."

Loewe and the fifth exhibition in his series "Chance Encounters". Another brand that involved with the annual Art Basel event is Loewe, owned by the French conglomerate LVMH. The brand presented the fifth exhibition of its series "Chance Encounters", which brings together different artists from different disciplines with the intention of generating interesting debates. 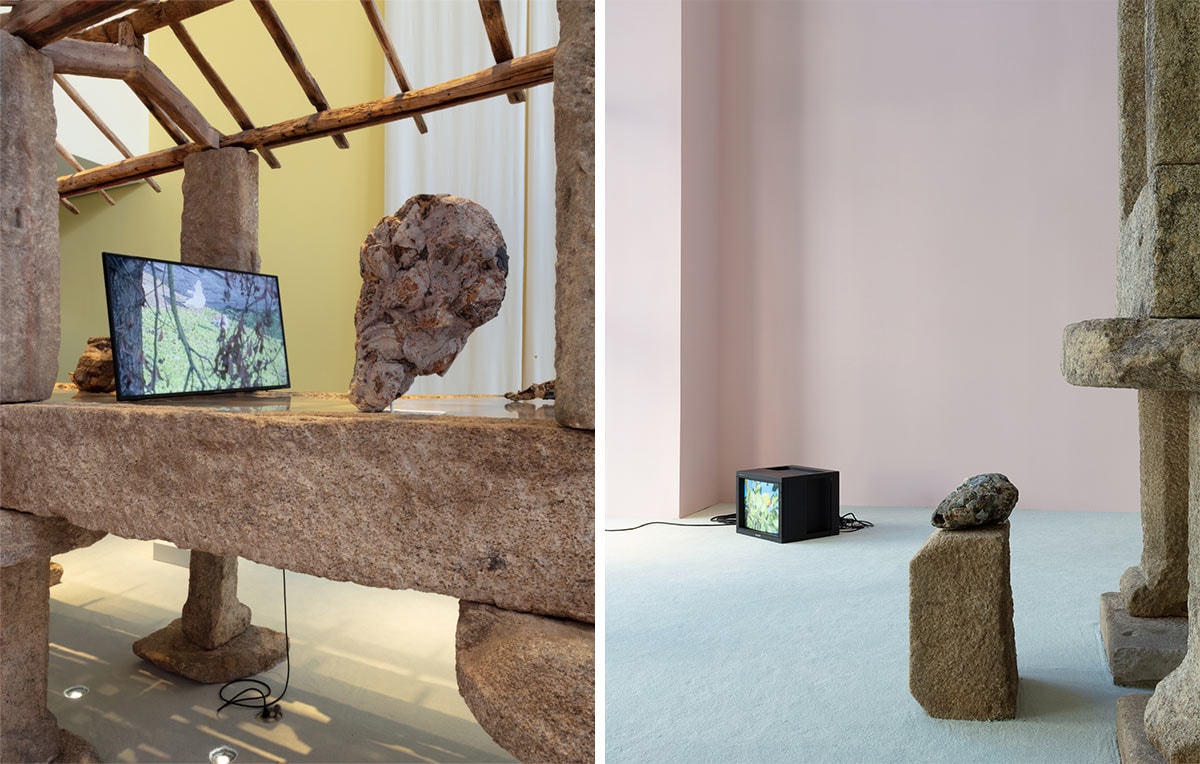 This year's exhibit features the work of British installation artist Hilary Lloyd, who has created an installation where she combined textiles, sound and video. "Chance Encounters" also features pieces from English artist Ewen Henderson, who created large ceramic sculptures for the exhibit.

"Hilary Lloyd's work is in perfect tune with the contemporary moment and the way we engage with the surrounding visual world," said Jonathan Anderson, Loewe's creative director, in a statement. He added that, "Lloyd's installation will generate an impressive dialogue in relation to the daring material richness of Ewen Henderson's pieces".

A limited-edition of "Fendi Baguette". Another LVMH company present at Art Basel was Fendi. They saw it as the perfect opportunity to present a limited-edition of their iconic Fendi Baguette bag. The bag comes in two different sizes, which will be exclusively available in its Miami store and whose new claim to fame is that it is made of a scented leather, which makes the piece a "multisensory" article that can be seen, felt and smelled. Fendi collaborated with the Canadian artist Christelle Boule and the famous perfumer Francis Kurkdjian to create the bag. 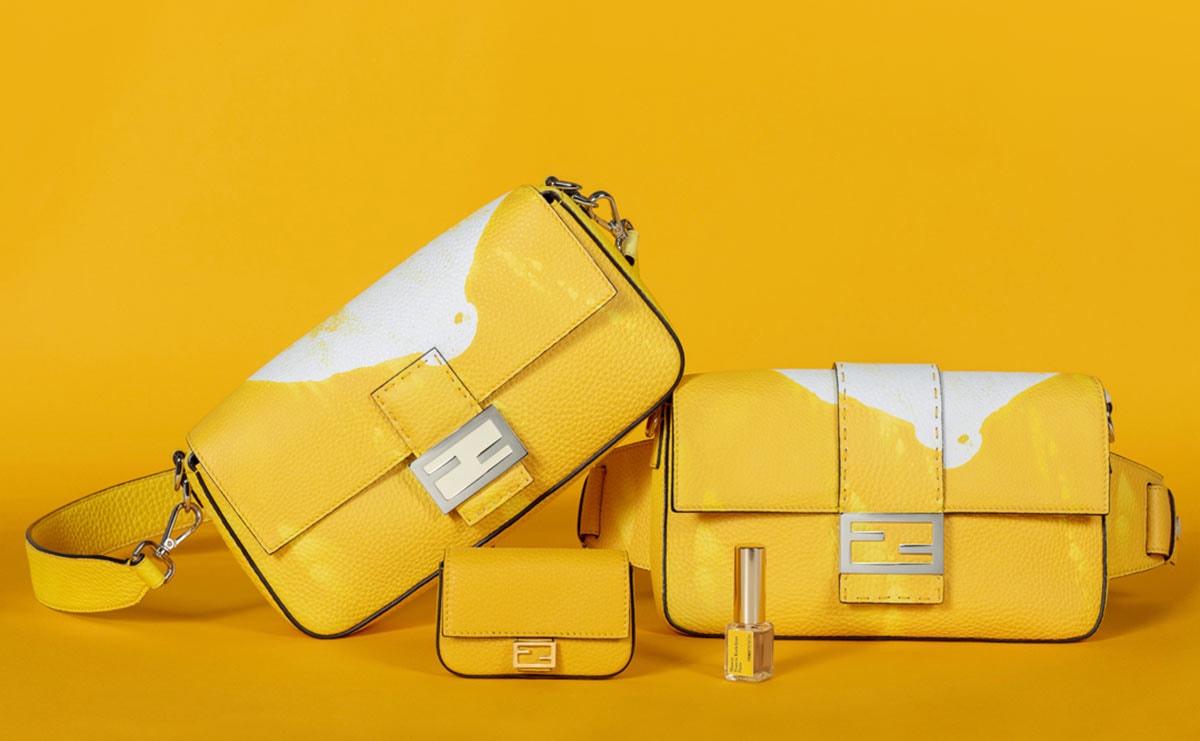 Versace: photographs and pieces of furniture to pay tribute to their creative heritage Versace, part of the multinational Capri Holdings (Michael Kors) since January 2019, decided to organize the "South Beach Stories" exhibition. The exhibition was curated by interior designer Sasha Bikoff — a regular collaborator with the brand — and features work from artist Andy Dixon. The exhibit opens its doors today, serving as a tribute to the book of the same name published by the brand in 1993.

Visitors will be able to admire different designs taken from the Versace archives, Doug Ordway's own photographs from the original book, and different pieces of furniture specially created by Bikoff and inspired by some of the brand's most acclaimed collections. Among them viewers will find a bed made of surfboards, a swing and a golden coffee table. 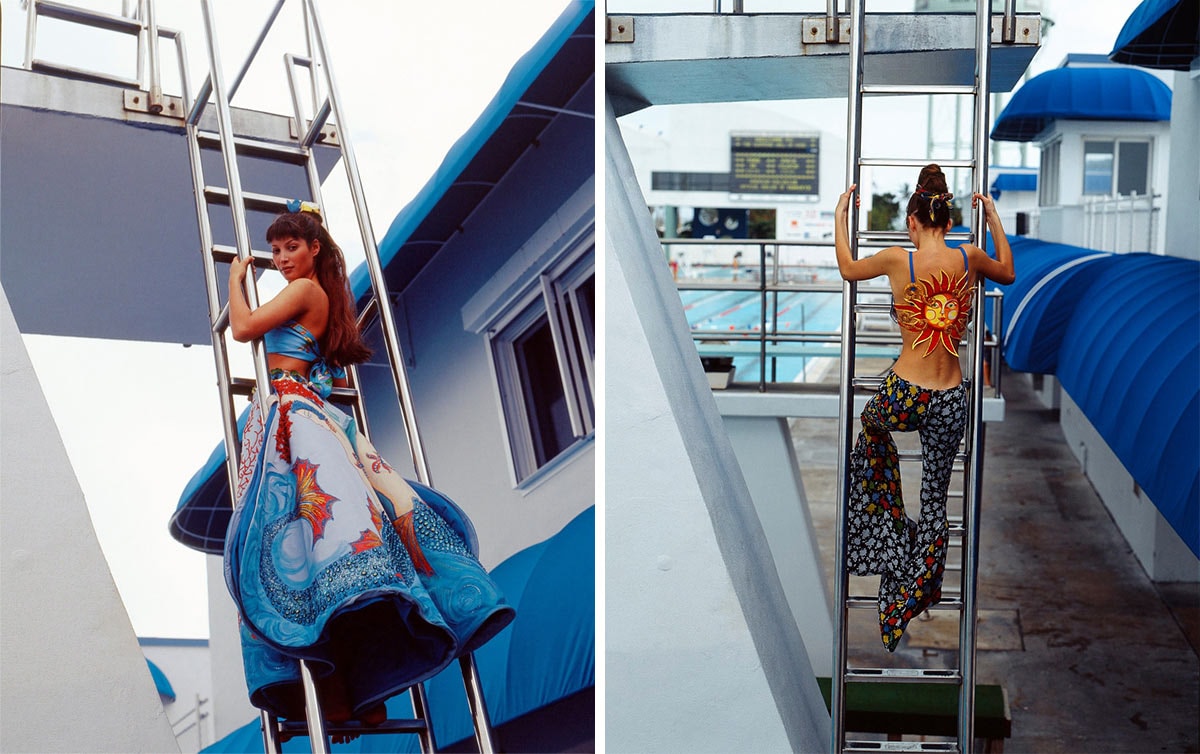 Miu Miu wooden stool Another brand that opted for the furniture meets fashion approach is Miu Miu. They presented the second edition of their M/Marbles stool, a unique stool that will be available at a slightly higher price than its original version, which according to the brand denotes its character as a work of art over a functional piece. Made of palm wood, walnut and hand-blown Murano crystals, the piece can be purchased both online and in the Miu Miu store in Miami. 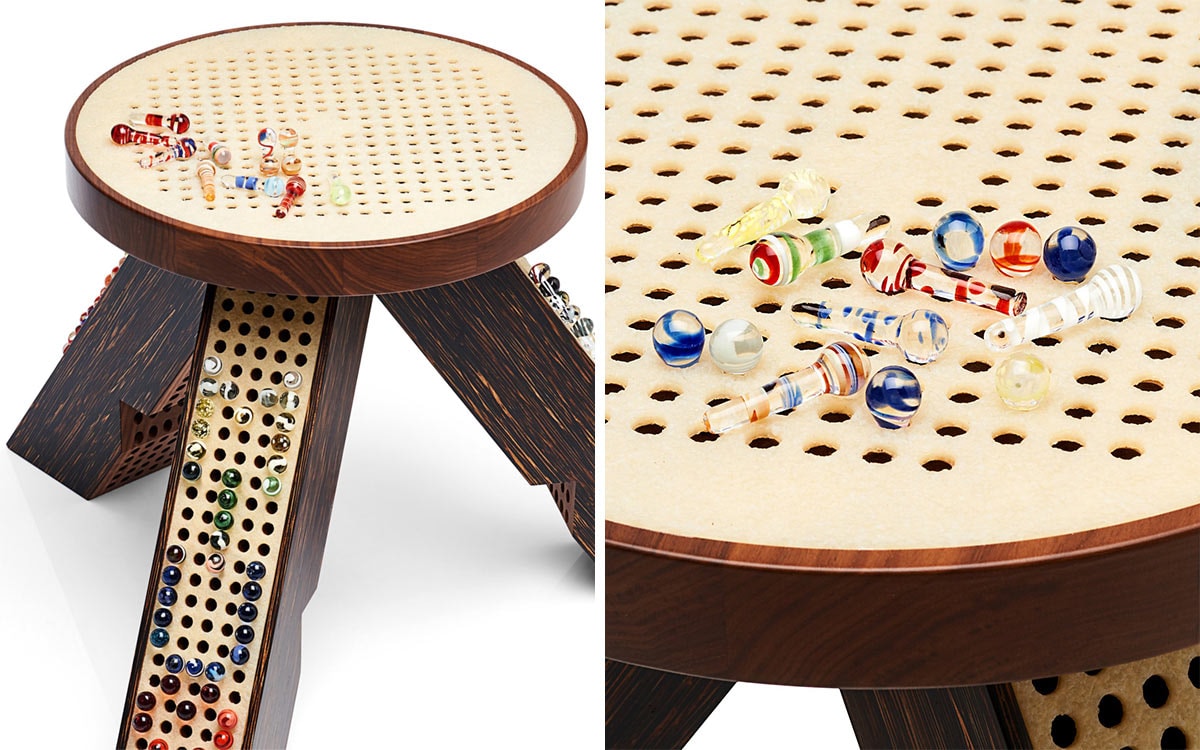 From the Dior show to the Chloé, Gucci and Lenny Kravitz festivities In addition to this series of initiatives specially devised for Art Basel Miami Beach, there are many fashion brands and fashion houses that also had exclusive parties and events.

This article was originally published on FashionUnited.ES, translated and edited by Kristopher Fraser