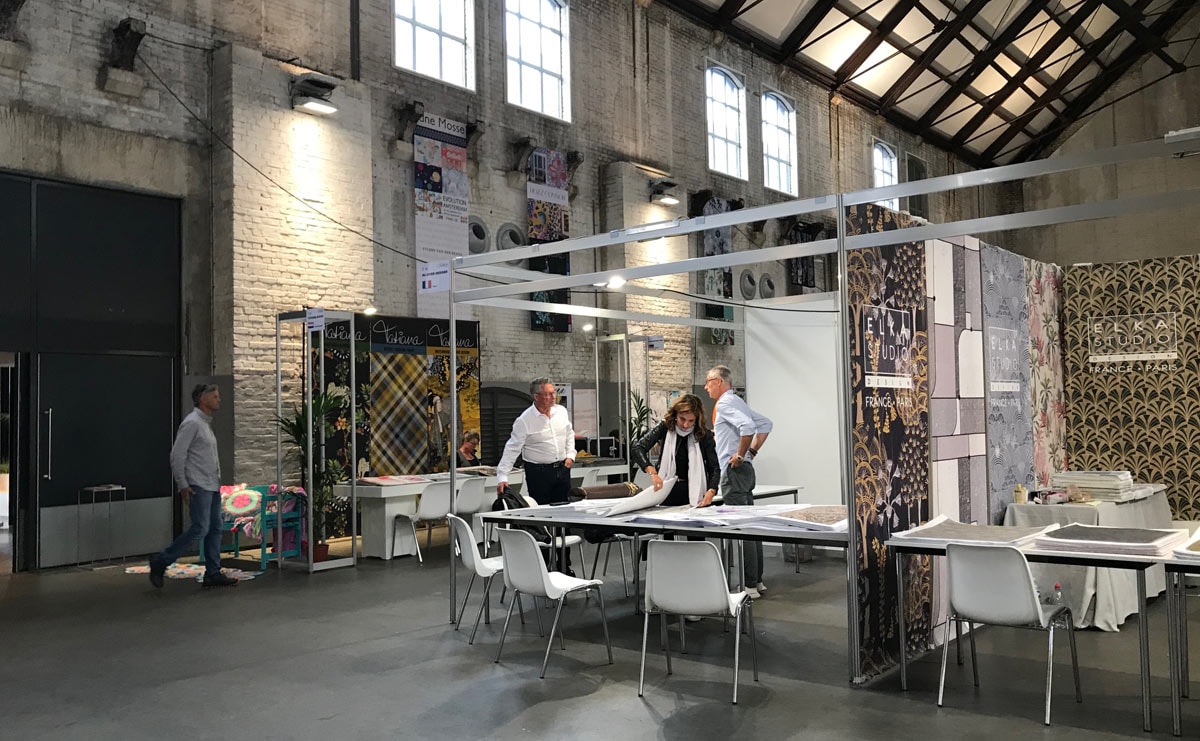 Evolution Amsterdam: A visit to the new fair specialized in textile designs

In the West of Amsterdam, inside two red-brick buildings of a former gas factory, thousands of poster-sized paper sheets printed with different patterns were lying across the tables of the stalls.

At the start of September, 65 design studios were showing their work at Evolution, the new fair for textile pattern design that drew 400 visitors to the Dutch capital in June. The patterns on display range from abstract grey geometrical shapes to jungle leaves in lush tones of green. The sheets, which can cost up to 800 euros or more, are designed by the studios for the textile industry.

Patterns designed for home textiles tend to be larger scale than the ones for the fashion industry. Pattern designs are presented at various fairs worldwide, with Heimtextil and Maison et Objet being two of the premier fairs in Europe catering to home textile makers, while Premiere Vision serves fashion companies. At the existing fairs, textile designs are just a subcategory in addition to furniture or materials, but at Evolution, the patterns take centre stage.

”It’s a rather small fair, nice and easy. It’s not packed, so you have more privacy. And I want to keep it that way,” Chris Verbeek, the organizer of Evolution, said in an interview in Amsterdam on 5 September. Even though a third hall with fabrics might be added later, the founder and owner of the Dutch studio Verbeek Designs seeks to create a more intimate atmosphere catering to the needs of designers that blockbuster fairs with several thousands of exhibitors and visitors don’t offer.

“I wanted to prove it’s possible to provide people service. We go around with coffee and tea”, Verbeek said. With this September edition of the fair, Verbeek jumped into the gap that was left by Brussels fair Mood Indigo after it was shut down earlier this year. Although Mood Indigo used to be responsible for a good part of the yearly turnover for the design studios, it still remains to be seen whether Evolution will take place each September. The next Evolution will take place in May.

For textile design studios, it is crucial to meet buyers at fairs as their customer base is international and scattered; it wouldn’t pay off financially to visit clients one by one. The making of a design can take a few hours to a full day or longer. A design for home textile producers sells at 700 to 800 euros, according to Verbeek.

The majority of fashion companies aren’t willing to pay for an exclusive design - only around 10 percent of fashion companies purchase from outside studios, he said. And they’re mostly only willing to pay between 200 to 300 euros per design in Europe. Nonetheless, studios like Verbeek’s are trying to attract more clients from the apparel industry to find more buyers for the designs that they produce each year. As many companies also have their own designers, they go to fairs for “cherrypicking”, said Chris Verbeek who sold designs to fashion companies like Versace and Esprit in the past.

As European fashion brands aren’t willing to pay as much, the US design studio Prints of Orange mostly sells to US customers, co-owner Ine Jans said in Amsterdam. Her studio demands at least 650 euros for a fashion print.

As fabric design and development are positioned at the beginning of the fashion cycle, studios need to anticipate trends well in advance. Studio Crespi 33 S.r.l has almost finished its work for fall/winter 2020 and has already started to work on spring/summer 2021, said its sales manager Annalisa Crespi.

While an Indian mood with Cashmere and Hippie themes was dominating the past two to three years, it’s now shifting to an African mood and modern art deco with fashion houses Dior and Valentino emerging as the most interesting ones to watch, she said. Studio 33 S.r.l. is based in Como, one of the Italian centers of textile production and a European heartland for pattern design. Traditionally, Studio 33 has worked for high fashion and contemporary textile producers as well as brands. At Evolution, it is looking to meet buyers from home textile companies.

“We try to provide our personal interpretation of colors. People need something new from us, not something that is already in the shops,” Crespi explained. “We are creative people who catch what is in the air in terms of trends, personalize it and propose to customers.“