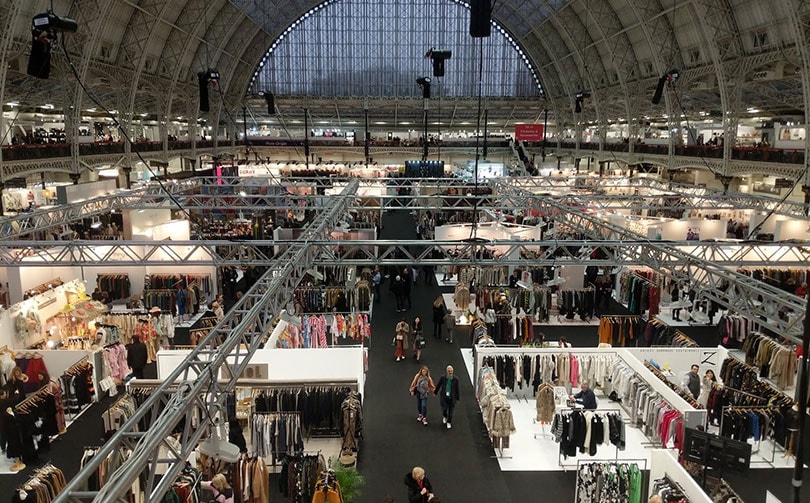 London - UK fashion trade show Pure London had a bumpy start on Sunday, with Storm Ciara battering the UK and resulting in much of the country’s transport services being temporarily closed. But despite the setback and a quiet first day, the fair, which took place between 9 - 11 February at Olympia London, celebrated a generally upbeat AW20 edition.

Though the organisers of Pure don’t publish visitor numbers, they did confirm that footfall was up year-on-year, with the main hall, dedicated to womenswear and the Pure catwalk, experiencing a consistent flow of visitors and brands reporting a steady amount of orders.

“It’s been great - today we’ve been really busy,” said a spokesperson from Shoreditch-based womenswear brand Religion. “We’ve consistently had two or three customers at the same time here - a mix of new and returning ones.” The brand was showcasing its AW20 'Come As You Are' collection which focused on layering with rich textures and oversized prints in a palette of nature-inspired neutrals such as caramel, cathay spice and taupe run throughout. “Pure London really works for us - it’s a show where people write orders. We’ve noticed at shows in Berlin people might come and look around but don’t necessarily make orders.” The label said it saw a lot of buyers from England, Scotland and Ireland and a few from Israel, Turkey and Greece.

French brand Lacoste was attending Pure for the first time. Traditionally known as a menswear label, the goal of its visit to Pure was to showcase its womenswear offering which has been a key focus since Louise Trotter joined as creative director in October 2018. In its retail boutiques, womenswear currently accounts for about three percent of its overall trade. “There has been a lot of people here who are quite surprised that we do a womenswear collection and the main feedback has been really positive so it’s definitely been worth doing,” said the brand’s UK accounts manager Emily Voss. “We’ve chosen to style the stand differently from the corporate Lacoste vision - we’ve tried to make it a bit more approachable and ready for a multi-brand environment which is what we’re trying to unlock.” Moving forward the brand said it might also consider showing at premium womenswear trade show Scoop in future seasons.

British fashion designer Matthew O'Brien was showing his eponymous label for the first time at Pure, an event which also marked the brand’s first foray into wholesale. “It’s been great for us - we’ve seen a real buzz and interest in our collections from buyers across the three days,” O'Brien said. Asked about the decision to launch wholesale, he commented: “We are really excited about expanding the brand and getting as many people wearing it as possible. I think the way to do that is through wholesale collections - it’s about being freely available at different price points through other retailers.” Looking forward, O'Brien said would like to open stores in Liverpool, Manchester and London in the next three years.

London-based brand Milingona was showcasing for the first time at Pure. The businesswear-focused brand offers a range of wrinkle-free clothing ideal for entrepreneurs or public speakers,” at a price range of between 80 - 140 pounds, with the exception of two handmade coats priced at 600 pounds each. “We’re really proud and excited to be showcasing the brand for the first time at a tradeshow,” said managing director Anduela Ismaili. “People have been particularly excited about our two handmade coats and they’ve loved trying them on which is great to see.” The brand’s Blue Sky coat was the “masterpiece of Milingona Fashion AW20/21” - the coat can be reversed and taken apart to reveal four different looks suitable for different occasions. Though Ismaili said it was a great opportunity to showcase the brand to international visitors, she said she was a bit disappointed by the footfall and would perhaps consider showing the brand at a more premium trade show in the future, such as Scoop.

Things were quieter in the second hall at Pure, which houses sections Pure Men for menswear, Bubble for childrenswear, Conscious for sustainable brands, Body for athleisure and swimwear, and Origin for garment, fabric and supply chain sourcing.

Showing at a trade fair for the first time since launching last year was luxury menswear brand Aristocracy London. The label creates limited edition 3 piece suits for the modern gentleman, who likes to look “sharp, unique and suitably attired at all times.” Founder Laz Tyrekidis said: “We think it’s really important to have that physical presence whether through showrooms or trade fairs because when it comes to luxury fashion and tailoring it’s important to be able to try things on - to be able to really feel the quality of the garments and see the bespoke details.” The brand is planning on opening a showroom in Knightsbridge, London, next month. “It has not been quite as busy as we were hoping for,” Tyrekidis said. “I’ve been here many years as a visitor and just felt that there wasn’t as much footfall in the menswear section as I’d hoped for. I think considering the speed at which the menswear industry is growing, it would be great to see that reflected at trade shows.”

In Pure Conscious, brands generally agreed footfall was up on last year since the section was brought from the second floor down to the first floor, but they thought more could still be done. Brands agreed that they would like to see more visible differentiation between sections, either through clear colour coding or signage, so people knew exactly how to find them.

Mark Bloom, managing director at sustainable fashion brand Komodo, a stalwart of Pure, said: “The sustainability movement has been an awfully slow-burning thing but it is starting to grow. I’ve been doing it since 1988 and in those days people just laughed and wondered what we were talking about in the fashion world. Now people are realising the future needs to be more sustainable which is great.” He continued: “We’re really glad to see England starting to catch up with some of the European countries that have been pioneering the movement such as Scandinavia, Germany, Holland, Switzerland - but more still needs to be done to put a focus on sustainability, we feel a bit hidden away in the corner.”

Ben Wildner, from sustainable German streetwear brand Wat Apparel, was pleased with the first of his brand’s appearances at Pure after showing at larger, sustainable focused fairs Neonyt and Premium in Berlin. “It’s been exciting, we’ve spoken to a lot of people and we’ve already signed up to come next year,” he said. “If I’m honest, the footfall wasn’t as high as I was hoping, but the people who have visited showed real interest in our brand.”

Organisers of Pure announced during the event that they will be making changes in the show’s layout in the upcoming July edition to accommodate exhibitors’ and visitors’ demands. In the summer, the Pure Conscious, Pure Men, Pure Body and Gen-Z sections will be brought into the main hall, while Pure Origin will have more space in the second hall. Pure Conscious will be positioned at the front of the first hall, so visitors will immediately see it when walking into the fair. “Sustainability is really at the forefront of the fashion industry and we want to reflect that at Pure,” said Martin Arnold, fashion portfolio director of Hyve Group. “We are putting actions behind our words and repositioning sustainable brands in a really prominent area because we want sustainability to be at the heart of everything we’re doing.”

Brexit, a word that has plagued conversation about British business both inside and outside of the fashion industry since the referendum result was announced back in 2016, was again a talking point at Pure London. On Monday, Michael Gove warned businesses that trade with Europe to prepare for “inevitable” border checks after the transition period ends on 31 december 2020. But despite that, and while many buyers at Pure admitted they were remaining careful with spending, there was an overall feeling of optimism and lift in confidence compared to previous seasons which many buyers said was partly due to the December general election result.

“Since the general election we have genuinely seen a positive bounce in confidence. No one knows for sure what will happen with Brexit but people now know it’s happening and they just need to get on with it - it's a great example of the resilience of British retail,” Arnold said. “Whatever happens the UK will still be a really important fashion and retail hotspot - London is a fashion capital, without question.”