Never one to shy away from voicing her opinion, Katharine Hamnett took to the main stage of Pure London on Sunday evening to give a passionate speech about the state of the fashion industry, while criticising the government, fast-fashion brands and policy makers alike for their contributions to an industry which still sees millions of farmers and workers living in poverty.

The activist and fashion designer known for her eponymous brand and her politically charged T-shirt prints, including ones reading ‘Choose Love’ and ‘Cancel Brexit’, was quick to throw fast-fashion companies in her crosshairs. “A lot of brands are really making an effort, but far too many aren’t. Things have proceeded, but they’ve proceeded incredibly slowly,” she said in her speech. “In the 1980s no-one knew there was anything wrong with the fashion industry. That has changed now, a lot of brands are changing, but a lot aren’t. Brands are unwilling because it puts up their costs.” Hamnett added that her ‘plan A’ would be to get rid of the “one pound fifty T-shirts” that seem to be popping up more and more in British stores.

In January, MPs criticised leading UK fast-fashion companies, including JD Sport, Sports Direct, TK Maxx, Amazon, Boohoo, and Missguided, for “failing to commit to reduce environmental impact” within the industry, following a request in October by the Environmental Audit Committee (EAC) for them to reveal their environmental records. MPs, like many others, couldn’t fathom how brands were able to churn out clothing so cheaply - in some cases T-shirts at a few pounds a pop - while still claiming to pay workers adequate wages.

Katharine described Western governments and Western companies as “complicit right the way down the line” with the “devastating and heartbreaking” conditions of millions of farmers living in poverty. Futurist and entrepreneur Anne Lise Kjaer, added: “My dream vision of the future is where CEOs will say ‘I don’t want to just be the best in the world; I want to be the best for the world.’ We see too few of those, pioneers who are really making change happen.” 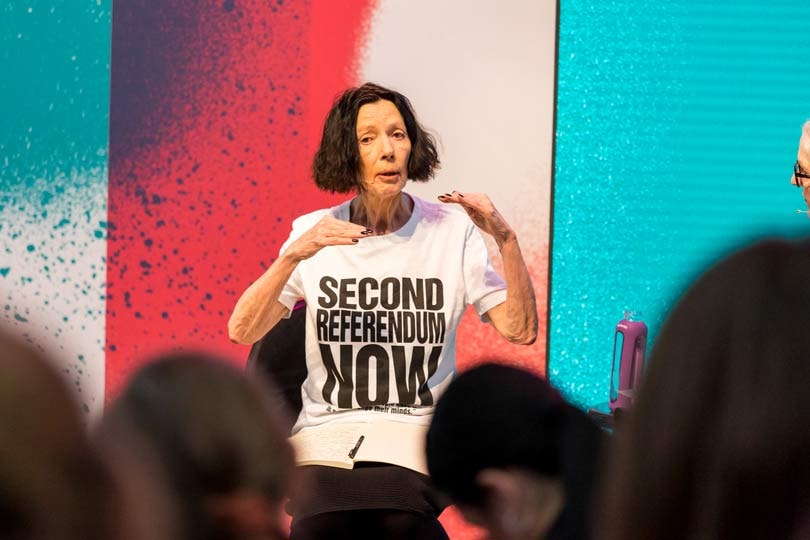 But how do we achieve this dream? What’s the answer to an industry mad with fast-fashion? Well, Hamnett thinks we have to start again, strip it all back and restructure the fashion industry from the bottom, and re-industrialize the UK using the natural resources we already have. “We can start again as a manufacturing country. We need to start from scratch but do it completely sustainably, change the old business model and unnecessary profit making. But this must come from the top, it is the responsibility of the CEO’s and boards of directors to make the changes. Businesses need to be arm-wrestled by legislation, we’ve had 30 years of choice and now we need laws.”

‘A lot of brands are really making an effort, but far too many aren’t’

But which laws could specifically help a problem so deeply ingrained in the industry? Well, for someone proudly donning a ‘Second Referendum Now’ T-shirt, the EU, quite unsurprisingly, has something to do with it. Hamnett said that in order to ensure that workers are working in fair conditions and for fair wages, the same working standards should be expected inside the EU as outside of it.

“My overall solution is to insist on the same standards from goods outside the EU as the standards set inside the EU or they aren’t allowed in,” she said. “It would create a level playing field, help clean up the environment, would mean the same health and safety and labour standards, and also make the EU more competitive.”

Katharine added: “People want something that doesn’t damage the planet. They want to know that there’s going to be a life for their children and their children’s children, and we’re not heading that way.”

Pure London takes place at London Olympia from 10-12 February. Stay tuned for more coverage from the event at FashionUnited.