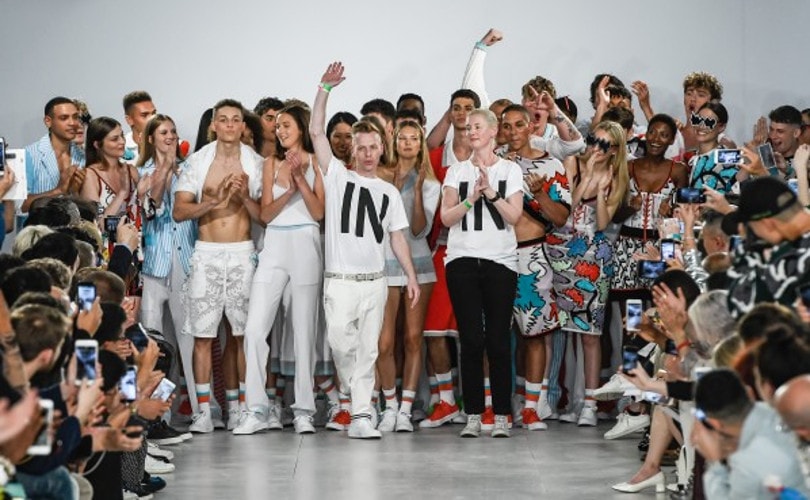 6 effects a Brexit may have on the Fashion industry

London - With the EU referendum just a number of days away, both sides 'Remain' and 'Leave' are pushing hard to make their voices heard. As the rest of the world holds its breath and waits to see which way the pendulum will swing on Thursday, June 23, several prominent members of the UK's fashion industry voice their thoughts on the matter. Industry leaders including the likes of Vivienne Westwood, Ashley Williams, Jonathan Anderson and Claire Barrow have all publicly voiced their support for the staying in the EU, while other designers such as Christopher Raeburn, Sibling and Daniel W Fletcher used their catwalks shows during London Collections: Men (LCM) as platforms to show their support. A survey conducted the British Fashion Council revealed that 90 percent of British fashion designers will vote to stay in the European Union on Thursday, versus the 4.3 percent who will vote to leave. ​

A photo posted by Vivienne Westwood (@viviennewestwoodofficial) on May 28, 2016 at 3:48am PDT

However, with the majority of the polls showing a neck and neck race for both sides, a Brexit could still be on the cards, which makes us question, what effect would it have on Britain fashion industry? FashionUnited has compiled a list of the 5 effects a Brexit is likely to have on the fashion industry.

Devaluation of the pound

The UK fashion industry is definitely a force to be reckoned with - contributing 26 billion pounds to the economy in 2014. Unsurprisingly, it is seen as one of the UK's most important exports industries, accounting for a total of 7.5 billion pounds in 2014, according to FashionUnited's statistics. However one of the most immediate effects of a Brexit is likely to be the depreciation of the pound. Debate concerning the EU referendum has already had effect on the strength of the British pound, which depreciated to a seven-year low against the dollar before climbing up again this week. HSBC Holdings has predicted that the value of the pound could drop by as much as 20 percent if a Brexit is voted through, which could pose a very significant effect on British fashion businesses that outsource their production or source fabrics aboard. Fashion companies which produce their clothing abroad in countries such as Vietnam, Cambodia and China, where they pay in dollars, would have to pay more as a weaker pound would see their manufacturing costs soar sky high.

End of free trade, posing a 'serious risk to growth'

Furthermore, exporting and importing fashion goods is likely to become even more difficult as new trade agreements will have to be made in the case of a Brexit. The UK currently benefits from favourable trade regulations with over 60 countries and in order to maintain its relationships, it will have to negotiate new agreements with both European and non-EU countries. Although those in favour of leaving the EU counter that Britain would likely be able to negotiate favourable trade agreements, similar to Norway and Switzerland, a number of countries have warned that there "will be consequences" in the case of a Brexit. UK fashion brands may be have to pay increased taxes and fees to ship and sell their products abroad and foreign investors are likely to be deterred. However, export is cited as one of the key components for fashion companies to be able to reach over a 100 million pounds in sales, and any limitations placed on exports are likely to lead to a restriction in terms of growth, especially for small and medium UK fashion companies. A Brexit would also make it increasingly difficult for British fashion businesses to expand abroad and build a name for themselves. The G7 leaders recently issued a joint declaration, in which they stated that a Brexit would pose a "further serious risk to growth."

If the pound continues decreasing in value if the Brexit is voted through, it also means that the price of apparel, accessories and footwear is likely to increase. Why? A weaker pound, as highlighted above means that fashion companies alike will have to spend more money to produce the same amount of clothing. In order to recuperate those costs, businesses will be forced to charge more for the final product. “The cost of a weaker pound impacts all retailers, so it will be passed on to consumers,” said Brun Monteyne, senior analyst at Sanford Beinstein, to the Financial Times. Although most British fashion companies will have hedged their currency exposure for the next 6 to 9 months, prices are still likely to be affected in the long run. This price increase is likely to have a significant effect on UK consumer, who have enjoyed low inflation and little to no price increases for the past six years. Consumer spending has already declined over the past month in the run up to the EU referendum, which has taken a toll on consumer confidence, which is likely to continue to drop in the face of a Brexit.

Another blow the fashion industry would be handed in the face of a Brexit would see its educational institutions suffer. The European Regional Development Fund (ERDF) has granted millions of pounds in funding to London fashion schools in the form of research funding and initiatives which support innovation in the industry. The London College of Fashion receives significant financial benefits from the fund and uses its to sponsor initiatives which help graduates realize global opportunities, while balancing commercial potential with innovation. The ERDF also sponsors the British Fashion Council (BFC), the organizer behind London Fashion Week, London Collections: Men and other key sponsorships like the NEWGEN recipient and the BFC/GQ Designer Menswear annual fund.

In addition, a Brexit would make it even more difficult for international students to study in the UK. EU students currently pay the same rate as British students to attend prestigious fashion schools, such as Central Saint Martins (which charges approximately 10,000 pounds for a MA Fashion Course). But leaving the EU would likely change that and see European students having to pay the same as other international students - a cost which may scare off many prospective talents from studying in the UK at a great cost to the British fashion industry. Some of London Fashion Week’s most celebrated and innovative designers, such as Roksanda Ilincic, Mary Katrantzou and Marta Marques and Paulo Almeida, the duo behind Marques’Almeida, are EU immigrants, hailing from Serbia, Greece and Portugal. At the moment there are students from over 65 countries studying at the Royal College of Art in London, a number which is likely to drastically drop if the UK votes out of the EU. “At a time when London’s affordability is already putting tremendous pressure on our creative sector, we need to be opening up to opportunity, not closing it down,” said Frances Corner, head of London College of Fashion, UAL, to BoF. “There’s a lot at stake in this referendum, and not least for London.”

Loss of foreign talent and skills in the industry

One of the most potentially damaging blows a Brexit could deal to the fashion industry could be the restriction of free movement. Many British fashion designers and companies based in the UK employ European designers, or have ateliers abroad where they employ talents - business structures which could be damaged if European citizens lose the right to freely love and work in Britain and vice versa. For example, Christopher Kane, a Scottish designer based in London, label is owned by fashion conglomerate Kering. Although a number senior member of staff from Kering reside in London, such as its chief executive officer François-Henri Pinault, the company itself is based in Paris, France. As one of the largest, luxury fashion conglomerates in the world, Kering ensured its designers have access to the best seamstresses and ateliers across Europe. But with a Brexit the borders between Britain and the rest of Europe may be closed.“All these amazing seamstresses from Italy, from all over Europe, that have been working with us for five years … How much would it cost for us to get them visas?” questioned Kane in an interview with the New York Times. The answer for now remains uncertain as exact guidelines of how the Brexit would occur have been shared.

In a similar vein to the previous effect, travelling between Britain and Europe is likely to become even more complicated and expensive in the event of a Brexit. Creative designers, such as Jonathan Anderson, who is based in the UK but has to travel weekly to Spain to meet with his design team for Loewe, is just one of many who will be faced with increased travelling costs and restrictions. The same goes for fashion journalists who travel abroad for each fashion week. Although the UK will push for UK citizens to keep the right to work and travel freely in the EU, British travellers will likely have to pay more for air travel, as a large chunk of the costs in aviation, such as airplane leases and fuel, are priced in US dollars. With the declining value of the pound, fares with British airlines are likely to rise.