During this summer’s CFDA Fashion Education Summit, in a panel entitled “Inclusivity + Diversity - Size x Ability” a spotlight was shone on minority groups still left on the fringes of the fashion industry and what needs to be done about it.

Statistics show a 20 percent increase in millennials with disability and this is set to increase with every new generation, and according to the Council for Disability Awareness, over 1 in 4 of today’s 20 year-olds will become disabled before they retire. Some reports even suggest that the Paralympic Games will supersede the Olympics simply because of the quantity of potential athletes.

In 2014 Scheier founded the Runway of Dreams Organization, determined to make the fashion industry more inclusive to those with disabilities. Fashion designer by trade, and mother of a child with muscular dystrophy she saw her organization launch its first ever collection with Tommy Hilfiger for mainstream adaptive clothing in 2016, and now is encouraged that Target, Kohls, Zappos, all operate within the adaptive sector.

“It’s about so much more than clothing, it’s about confidence, it’s feeling good about yourself,” says Scheier whose son, Oliver, can play basketball yet struggles to get dressed, is preparing for college but can’t button his shirt.

Lucy Jones, founder of Ffora, received a brief while still a student at Parsons to design a solution that would one day change the world. She looked to a family member with Cerebral Palsy who, when he revealed all the daily challenges he lived with, helped her realize there was an entire body of people that fashion didn’t even represent. Ironically her proposal didn’t quite fit the school brief but luckily her professors encouraged her to keep going anyway. From her graduate collection “Seated Design,” she did indeed keep going, and now, four years later, she is preparing to launch one of the first companies to offer bags and accessories that attach to wheelchairs.

Acceptance is growing and progress happening, but it’s often thanks to those who have put in the legwork due to their personal investment in the cause. The world’s first little person mannequin based on the form of tireless advocate Sinéad Burke, is currently on display, attired in Christopher Kane, at the National Museum of Scotland’s “Body Beautiful; Diversity on the Catwalk’” exhibit. The mannequin taken from casts of her body will soon be available for purchase by retailers.

But not all on the panel are members of the the community they are serving, a fact in itself that can create conflict. “It keeps me up at night,” says Jones. “I don’t want to take the voice from someone else who needs to be heard. Who am I to put this out there? But it’s about collaboration, making sure you’re aware how you’re positioning yourself, elevating those who you’re working with.” Her aim is to create leadership roles. She gently rebuffs a quadriplegic friend who believes that because he can’t draw he can’t design, saying, “In this era we can communicate ideas many different ways. It’s about practicing what you preach in the design room, board room, so representation is reflected in every aspect.”

Understanding the target market is key, says Scheier. “I only know my world with Oliver––intimately. But this is for the people by the people. There isn’t a designer on the planet who can design for anyone with disability without listening and learning from that community.”

From the beginning, Jones worked with focus groups in Brooklyn and Manhattan, United Cerebral Palsy, and the Cerebral Palsy Foundation, while at the same time she became alert to the physical nature of the terminology we use to describe accessories handbag, backpack. In developing the language around her range of wheelchair accessible accessories, she was conscious of the need for more sensitivity. “Some people prefer to be called disabled, it’s a proud identity, others prefer person with disabilities, or differently-abled. As a brand we don’t want to dictate the language but keep listening as people self-identity.” But, internally, one of the favorite sayings she and her team return to is “You cannot spell accessories without access.”

Why the delay in tapping this market?

Tanya Taylor, eponymous designer of a range of inclusive-sized flirty dresses believes that schools still don’t have enough mannequins outside of the traditional figure, factories neither. And if, as she has discovered, tech designers have minimal to no experience in pattern making for larger sizes, then needless to say tech design for wheelchair users is practically nonexistent. 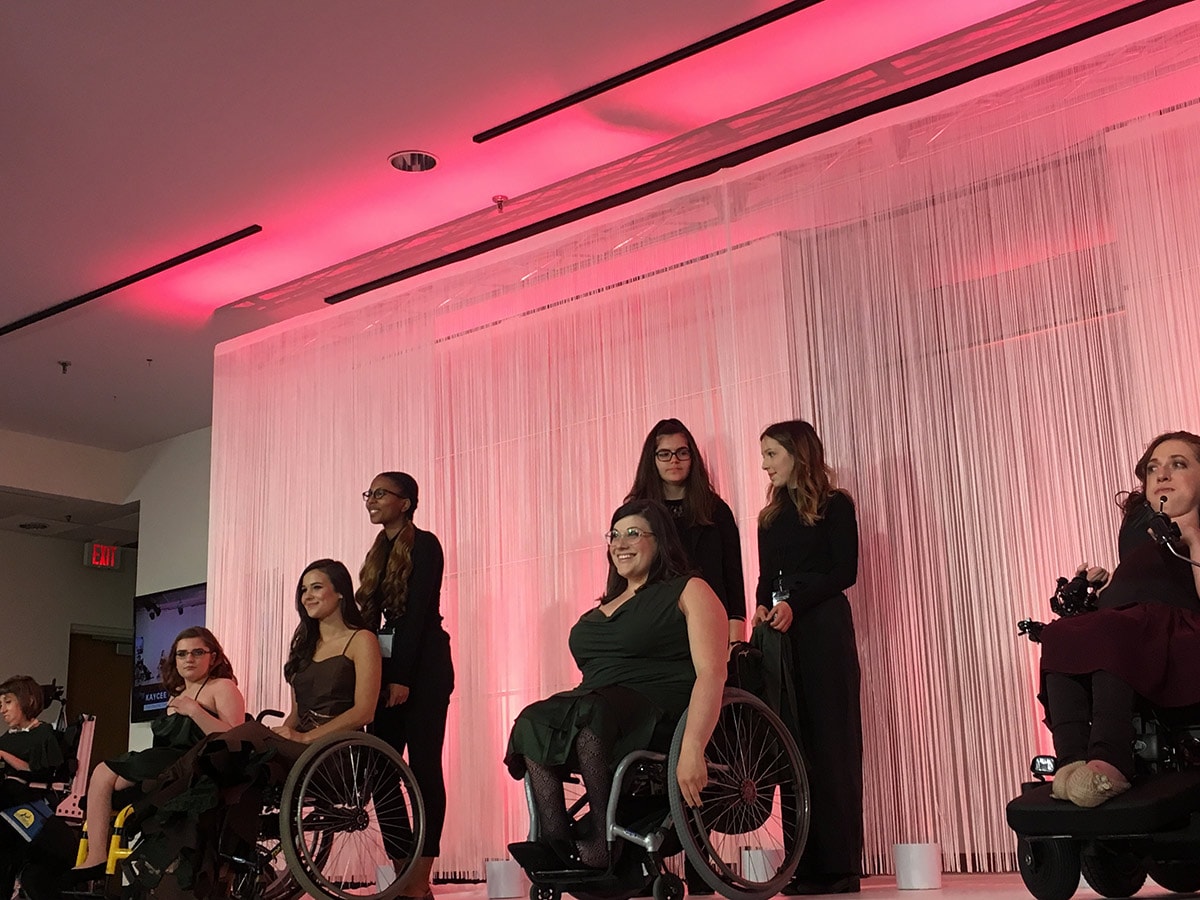 Model with muscular dystrophy, Jillian Mercado, is a rare example of wheelchair representation in fashion, and Scheier says the reason is fear. “It’s natural––brands don’t want to do or say the wrong thing, or to insult. But it’s about people first.”

When she started out she says most people in the education sector hadn’t heard of the phrase adaptive clothing, while those in the fashion industry believed that people with disabilities constituted such a small niche market, and that they didn’t have money to spend, or didn’t care about clothes. She went about dispelling myths and now points out that people with disabilities represent the largest minority group and also the only minority of which every one of us will become part at some point in our life. So it’s product to serve all. “One day, adaptive will be just another fit in the market,” she says, “no different than plus size or petite.”

Given the nature of the event, speakers encourage educational institutions to jump on board: to make adaptive part of the curriculum, to create understanding by bringing into classrooms people who live with disabilities to meet with students, and allow them to collaborate.

Says Taylor of all of the underserved consumers still out there: “It’s just another person to be inspired to design for.”