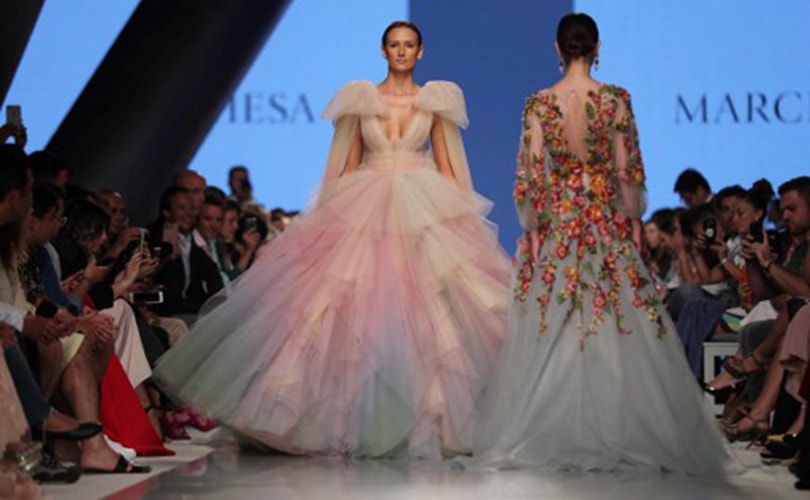 Designers, buyers, and influencers have descended on Dubai for Arab Fashion Week, a five-day event dedicated to ready couture and resort wear for women, men and those who refuse a label. The show opened Tuesday night with Jordanian-Canadian sensation Rad Hourani, known for his unisex designs, Palestinian-American Jenanne Filat and her menswear lineup straight out of Arkansas, and runway darlings Marchesa.

Hourani sent his models down the catwalk in geometric, binary-transcending designs "based on style preference rather than gender," with men, women and gender non-conforming models in layers of dark boiled wool and poplin, and all in pastel slip-on shoes.

Filat, of the US-based menswear line Barakat Bespoke, meanwhile decked her all-men lineup in suits, metallic lipstick, and no shoes. The week will also showcase designers specialising in abayas, a traditional robe-like dress that is gaining popularity among major labels as they move into regional markets. The International Dwarf Fashion Show will also host a show by American Wardrobe featuring models living with dwarfism.

'Design is for everyone'

While listed as an international fashion week alongside Paris and Milan, the twice-yearly Arab Fashion Week offers exclusively see-now-buy-now collections and pre-collections -- an issue that has been met with some contention by traditional gatekeepers in the world of high fashion. "Design is for everyone," explained Hourani, an invited member of the Chambre Syndicale de la Haute Couture, France's exclusive trade association for haute couture.

Hourani, the first unisex designer to join the association, was handpicked in 2010 by Vogue's Anna Wintour and the late Franca Sozzani to showcase his work in Milan. Along with Burberry, he has been a vocal champion of expanding the traditional system, and timeline, of ordering designs strictly as they appear on the runway months in advance.

True to his aesthetic, his Dubai show was conceptually complex but structurally clean: square necklines, skirts layered over pants, and matte black shades in sharp contrast against uncoiffed hair and a soundtrack featuring the iconic songs of Lebanese diva Fairuz. "I don't aim to make men feminine, or women masculine," Hourani told AFP after his show. "It's... to infuse the two anatomies and create one pure unisex neutral pattern. I think it's important to understand what neutrality is, what unisex is about."

On the other end of the spectrum is Marchesa. The brand's trademark fairytale pre-fall collection was an instant hit with the Arab Fashion Week crowd, some of whom put on their Marchesa best for the occasion. Many were still snapping selfies on the catwalk moments after the lights dimmed and music started.

With three-dimensional floral appliques, layers of tulle, long beaded fringe and intricate embroidery in blush, blue and metallics, Marchesa's collection of gowns was met with nods and excited whispers. Her four-year-old refusing to leave his mother backstage, Marchesa co-founder and designer Georgina Chapman made last-minute adjustments to her lineup with her son Dash on her hip.

"We've always had a strong clientele base here and I think it's because the Middle Eastern woman, the Arab woman, appreciates fashion," Chapman told AFP. "She's not afraid of trying something ... She's bold, and she's glamorous, and she's feminine, and she's unapologetic about that." And it's not just the women who are bold in their sartorial choices.

Barakat Bespoke, a family business out of Little Rock, Arkansas, showcased a selection of suits, cuffed pants and cotton tees on a group of male models from around the world, and of different ages. "This is the first time we've done anything international," said designer Filat, as her gold-lipped, braided-haired models stopped to hug her backstage. "We have to design things a little differently for the Middle East, but it's a little more fun," she said.

"We can do things a bit more outside the box than what we do traditionally, since... we design for the (US) south, generally, which is very conservative." And with the Muslim fashion industry booming, spending on modest wear -- which includes both traditionally feminine and gender-shunning designs -- is expected to top 480 billion USD annually by 2019.

"There's more strictness in the Middle East, but I also see here so many women who are free, who are evolving," said Hourani. "People understand my clothes -- women and men. It doesn't feel at all that I'm in the wrong place." (AFP)