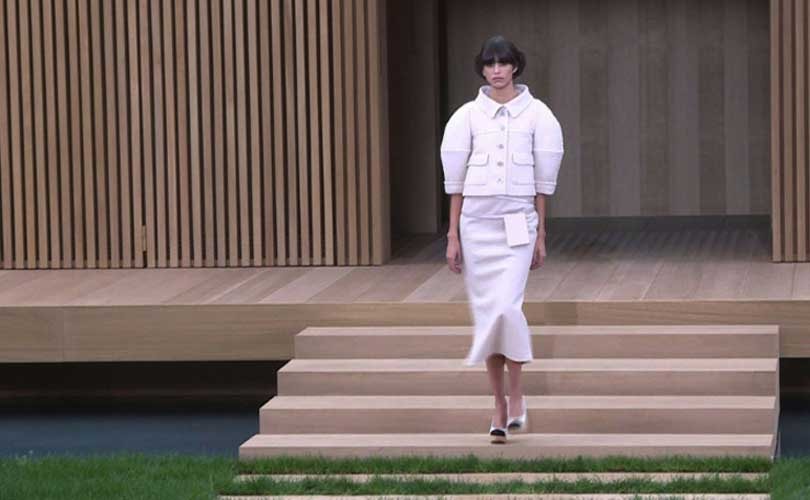 Languid models strutting along a grass-covered catwalk in Paris on Tuesday showed off Chanel's ecologically-inspired haute couture collection that avoided most of the red carpet flash.

Chanel -- the fashion house that is perhaps the most synonymous with Paris's reputation for glamour -- sent subtle, classic clothes across a runway outfitted with pools of water and wooden steps.

Dominating the stage was a vast wooden structure which would not reveal its secrets until show's end. The clothing -- think "Mad Men" meets "The Great Gatsby" -- seemed to reach back to a less flashy time in fashion when simple shapes, high-end fabric and understated colours ruled.

"It's not really bling-bling red carpet," said designer Karl Lagerfeld as he greeted fans and well-wishers in the oasis of grass, water and wood inside a glass-roofed exhibition hall just off the Champs-Elysees.

Just six weeks after Paris hosted a historic UN climate conference where 195 nations inked a deal to tackle global warming, ecological themes were at the fore, with wood beads, wild cotton and paper featuring in this spring-summer collection.

"We're in fashion and at the moment ecology is part of the expression of our time, what fashion is supposed to be," Lagerfeld said. "That is a kind of, how could I say, high-fashion ecology. It means that all can be used on a level where nobody expects it," said the German designer who lives in Paris.

Clad in ankle-length skirts, many models wore variants of the cropped coat Chanel has made a fashion standard. There were also shimmering beaded numbers straight out of the roaring 1920s, some even topped with sheer capes.

Others boasted darker hues of black, deep blue or brown, though plenty of white, gold and even touches of red shined through. Lagerfeld's inspirations were wide-ranging, with the models' long hair rolled up into a heart-shaped, low hanging bun, and Egyptian-looking thin black lines traced around their eyes.

Asked to explain, he whipped out his phone and showed a photo of a Picasso sculpture that bore a striking resemblance to the models' makeup and hair styles. "It's for the eyes and the hair... This was the inspiration," he said.

And the box? At the end of the show, the slatted wooden panels covering the massive wooden box at centre-stage lifted to reveal a sort of doll house containing the models, drawing applause from the crowd.

Lagerfeld admitted to the collision of influences in the show, describing the wooden structure as "Japanese and not Japanese." "I have never seen a house like this in Japan," he said, expressing regret that he could never have one just like it at home.

"I love the idea of wood, I would love to have this house in my garden, but in France you're not allowed. You'd never get it," he said. (Joshua Melvin, AFP)