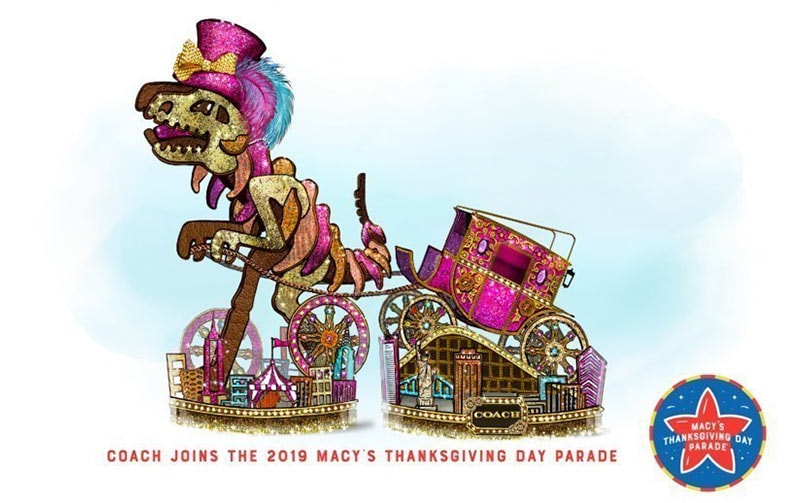 Coach and Macy's have announced a new, unique partnership: the luxury brand will be the first to participate in the retailer's annual Thanksgiving Day Parade.

Macy's will host its 93rd annual Thanksgiving Day Parade on November 28 this year. The televised event in New York City on Thanksgiving morning has become a tradition in almost every American household.

The parade features over 8,000 participants from all over the country, made up of performers, athletes and world-famous helium balloons featuring beloved childhood characters. Sponsoring brands such as Lego and McDonald's have marched floats in the parade in previous years.

Coach will debut a new float in this year's annual holiday event. It will feature the brand's mascot Rexy the dinosaur standing within a carnival-style reimagining of New York City.

"We can think of no better way to kick-off the holiday season than to participate in this great American tradition," Joshua Schulman, chief executive officer and brand president of Coach, said in a statement. "This project not only underscores our important partnership with Macy's, but also speaks to the future of the traditional wholesale business model, evolving from distribution into meaningful brand storytelling."

In preparation for Coach's Thanksgiving Day Parade debut, the brand will launch an exclusive collection of Rexy-themed leathergoods, footwear, t-shirts and accessories on November 15. The collection will be available at select Macy's stores nationwide through the department store's e-commerce site.

"We are excited to see our valued and long-standing partnership with Coach extend to the world-famous line-up of the Macy's Thanksgiving Day Parade this year," added Macy's chairman and chief executive officer Jeff Gennette. "As we kick-off the holiday season, the new float and Rexy-themed collection will be a great showcase for the Coach brand and promises to bring a dynamic new element to the Parade and must-have exclusive product to our stores."