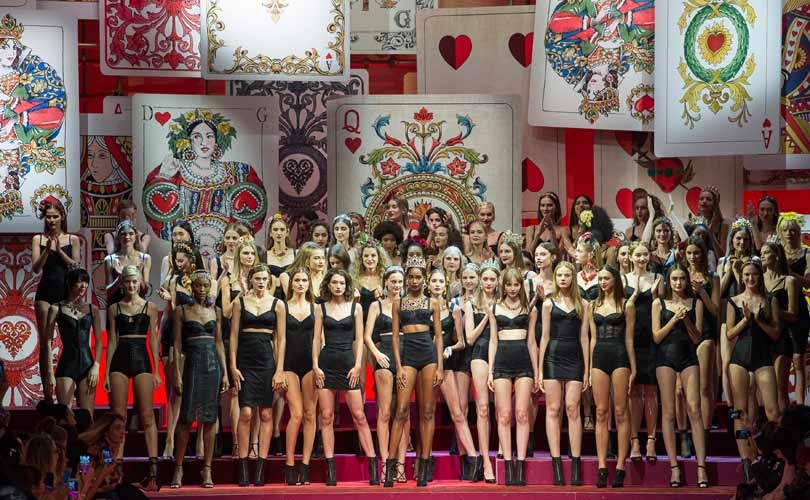 It was all crowns and queens on Sunday as Dolce & Gabbana unveiled a collection that paid joyous homage to women, who were feted on catwalks around in Milan this week.

The Sicilian duo went wild with dresses, jacket and legging combinations as well as tops emblazoned with the "Queen of Hearts" playing card motif. It was typically playful Dolce & Gabbana that also included glittering gold crowns on many of the models, but some of whom were also swinging fancy bags with produce poking out of them.

One silky pyjama-like pairing of a loose top and trousers was printed with fluffy baby chicks and halved oranges. "All women are queens and all women live for the heart," Stefano Gabbana told AFP after the show, with people-size "Queen of Hearts" cards floating from the wall behind him.

There were striking three-piece suits in solid colours and slim stripes that had shiny fabric, wide lapels and roomy trousers that didn't quite make it to the ankle. And being Italy, the designers also celebrated food, the nation's other love after women. 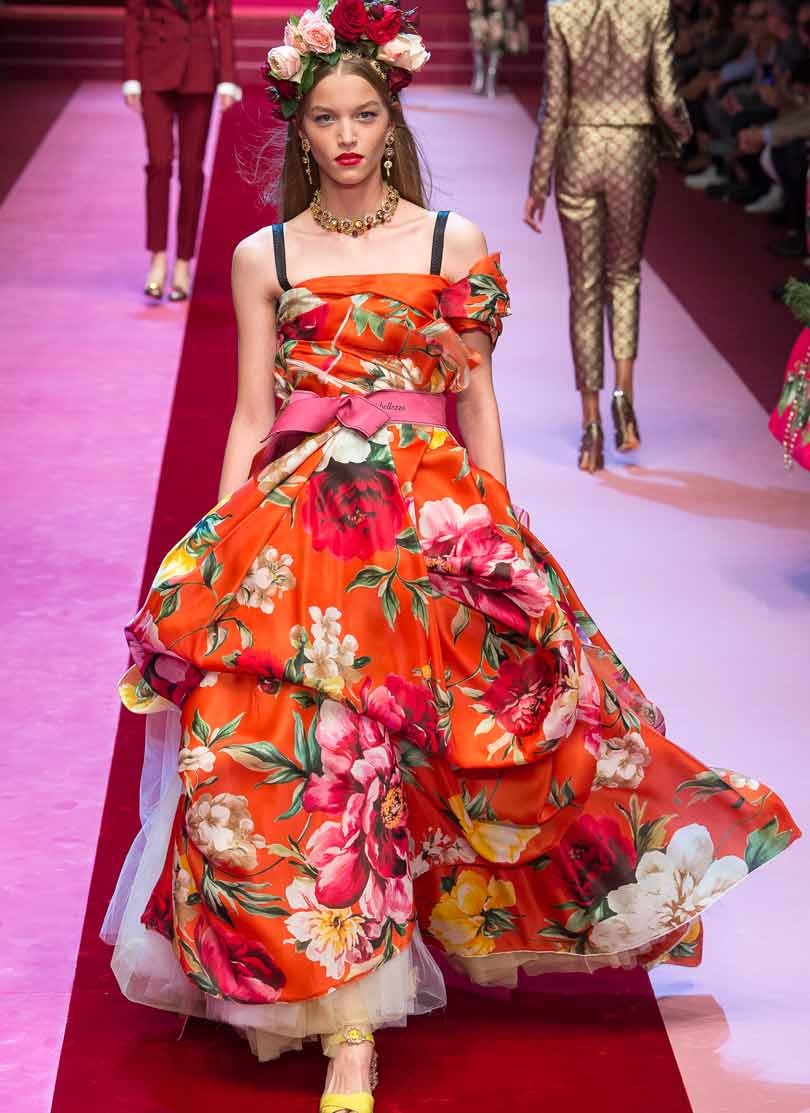 A silky dress was printed with cannoli, a sweeping white number bore sweet pea pods. And a form-fitting shorts-and-trouser duo was about halfway to a salad with its carrot and beetroot motifs. Fashion godmother Anna Wintour was front and centre as was internet star Cameron Dallas, whose van was chased 100 metres down the road by screaming teenage fans desperate for a selfie with him.

The Italian fashion house is just one of several luxury brands hoping to build up a loyal support base among the so-called Millennials -- those born after 1980, who came of age in the 21st century and are social media gluttons.

It has persistently courted young influencers and their Instagram followers. A little nod in their direction came in the form of purses whose iconic D&G logo had a hashtag tacked onto it. 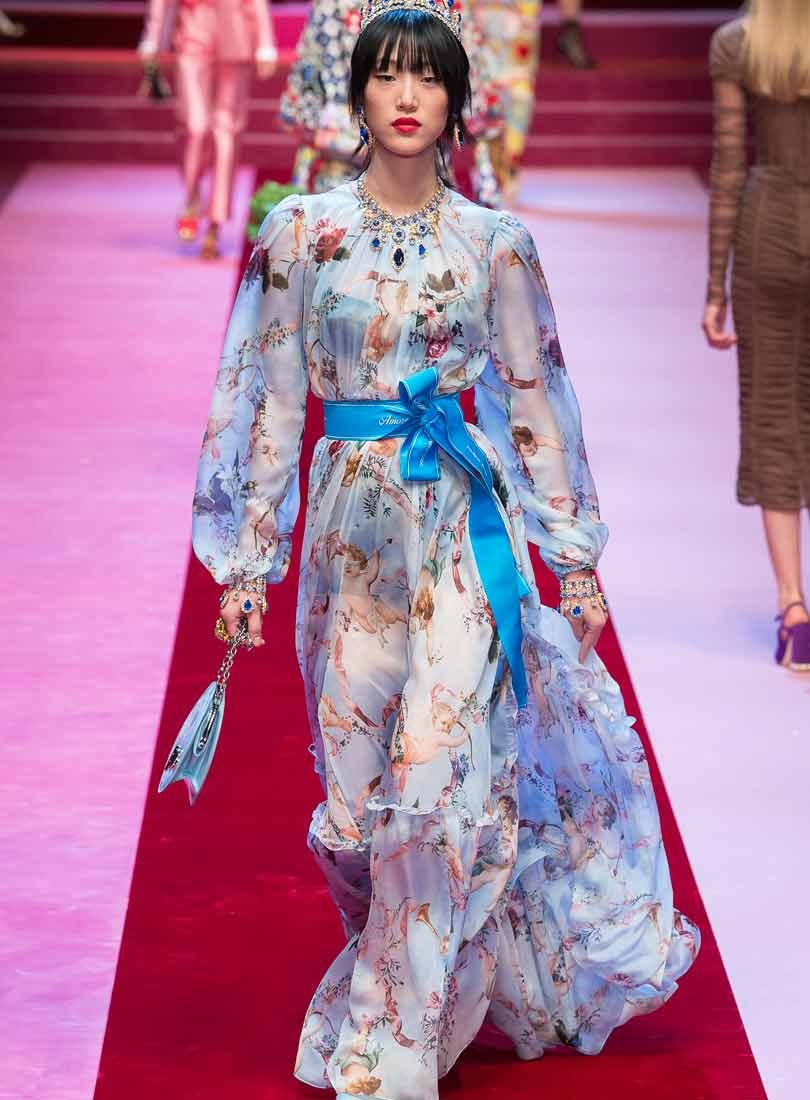 Paying homage to women was a theme on Milan's runways this week, including Miuccia Prada's collection that drew on the designs and characters produced by women graphic artists. "I feel we should really start being combative. I am kind of encouraging strength," she told reporters after the show.

Rebel brand Moschino showed off a collection on Friday that was a rock'n'roll riot of strong women, with lots of black leather, spikes and fishnet stockings The show even opened with motorcycle jacket-wearing models sporting miniature versions of the cap made iconic in Marlon Brando's 1953 biker flick "The Wild One".

Meanwhile, Sunday's show from Trussardi, one of Italy's oldest fashion houses, was all about escapism. It had plenty of abstract aeroplane motifs, clothes that billowed like parachutes and even a few re-imagined pilot jumpsuits. In her notes on the Spring/Summer 2018 designs shown in Milan, creative lead Gaia Trussardi said the suits were "inspired by the free and enterprising spirit of great female travellers like Amelia Earhart".

Never mind that things didn't work out so well for the American aviator. She and her co-pilot vanished eight decades ago over the Pacific while trying to fly around the world. Trussardi's clothes had lots of silk, straps and belts. Abstract aeroplane silhouettes showed up on suits for men, who are increasingly common on what was once a fashion week reserved for women. Some half-a-dozen houses will show co-ed collections over the six-day marathon in Milan.

There were also flat platform sandals with gold buckles as well as plenty of high heels with straps wrapping around the ankles. The journey was a big inspiration for Trussardi, but so too was the destination. Flower prints, like the flora of a tropical locale, made their way onto the clothes as did the perhaps less welcome fauna of what appeared to be snakeskin.

True to its roots -- the house started in 1911 as a glove manufacturer -- Trussardi also showed off new accessories. The Gita bag has leather trim, a compact shape and details that bring to mind the labels and tags that accumulate on a well-travelled bag. (AFP)

The international Fashion Week season for women's ready-to-wear kicks off in the month of September, with all eyes set on New York, Paris, London and Milan for next seasons latest trends. For all the women's wear catwalk season must reads, click here.
Photo: D&G SS18, Catwalkpictures
milan fashion week Trussardi womenswear d&g