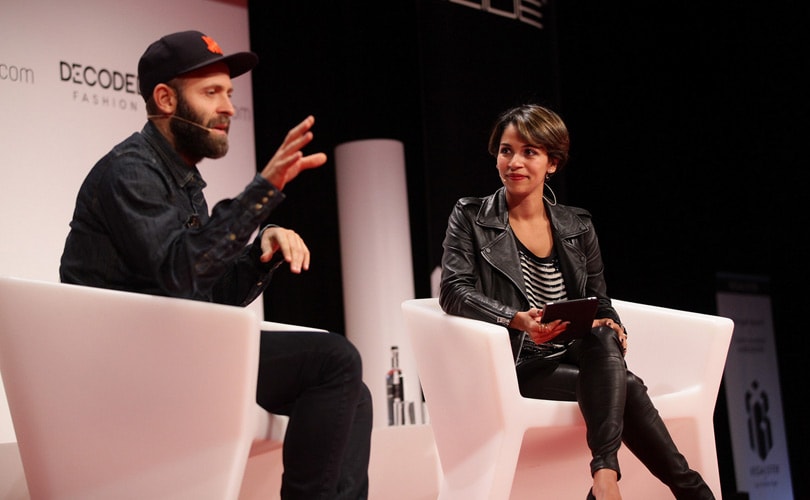 Decoded Fashion: 'Wearables is now. It is not the future, it is now.'

“It's a mix of reporting and influencing the future...I used to be a passing observer, but now I can dose myself in building and influencing the outcome of the story, which is something I couldn't do in the past,” explains Liz Bacelar, founder of Decoded Fashion, the global event series which brings together the top decision makers in the fashion, beauty and retail industry with emerging technological companies, on her role.

Bacelar, who previously worked as a reporter and a producer for CBS News, was always the first to know about digital changes in the field. After working for LivePerson, a public company, she began wondering what would happen if someone would put a number of fashion industry experts in a room, with these tech start-ups and how they would influence and change each other. So that is what she set out to do. “What I saw at the end of 2012 was the beginning of this revolution, that tech was going to be fashionable and that the fashion industry would need tech, it would become a necessity. I just happen to be lucky enough to see it, to be a part of it all since the very beginning. I actually thought they could change each other completely, so that's what we did.”

Decoded Fashion held its first event in April, 2012, which became the first event of its kind to seat a tech startup next to a designer. The event was a conference held at the Lincoln center, in New York, although there was nothing “revolutionary” about it, adds Bacelar. She admits that it was very difficult for her to convince the right individuals to attend, but in the end it all came together. “Then, the whole concept quickly spread all around the world, and today fashion-tech conferences are nothing new.” From there Bacelar and her team expanded the events to include weekly meet-ups in twelve countries around the world, fashion hackathons, the most recent one being held in Westfield, London, and summits covering a range of topics, with the last event in Milan focusing in the new possibilities of omnichannel.

“For me it is not about replicating, I am a TV producer so I get very bored, very quickly and part of being involved in the setup culture is about evolving and changing and disrupting yourself. And the evolving never stops, and now we are into the next phase with wearables and wearable technology.” 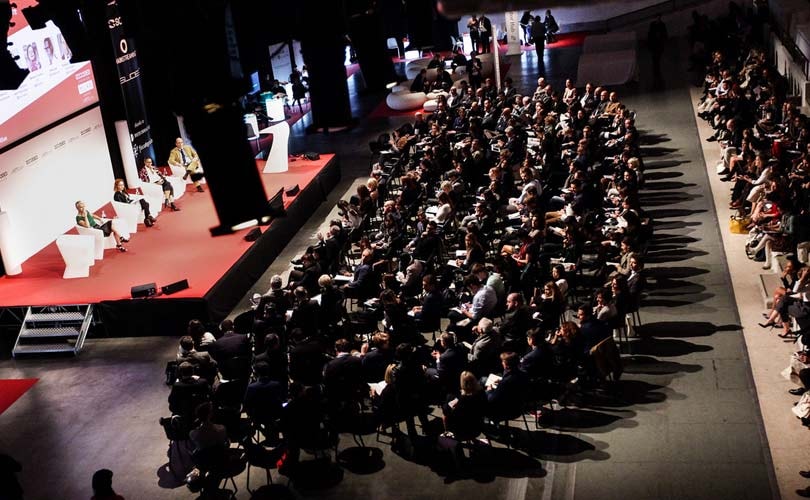 'Interconnected – a Global Summit on Wearable & Retail Innovation,' is the name of Decoded Fashion upcoming summit in New York, the first event to span a day and a half. With over one hundred industry experts and insiders lined up to speak, oversee mentor ship hubs and panels, the summit is set to become their largest event to date, with its first wearables competition as well. The judges include Dirk Standen from Style.com, Olivia Kim, director of creative projects from Nordstorm, Simon Collins, the Dean from Parsons and Myf Ryan, marketing director for UK and Europe for Westfield. “It's so cool to bring these people together, how everyone is so different yet so alike. They would never be in a room together if it wasn't for Decoded Fashion, it is the only event to bring these people together.”

“There's a lot of dating going on right now between fashion and wearable technologies and its really exciting...Now it's a cool thing to do to hang out with tech and start-up companies and its great to see everybody, CEOs, designers, coders, come together. Hanging out with individuals in the fashion industry was always cool, but now we are making tech cool. And as a fashion executive its really interesting to hear the other side of the story, and how another side of the brain views and connects to millennials for example.”

So why the focus on wearable technology? “It is going to be about wearables, because New York is where I take chances, although that's changing now,” explains Bacelar. “When you think about wearables, I think about New York, in between Europe and Silicon Valley, if I want to play with components, if I want to play with tech, if I want to push the boundaries, then this is the place to be, right in the middle. Wearables right now is a space which feels so large, but is actually quite tiny. If you look at the fashion devices on the market, they do a limited amount of things. There are the health and fitness devices, data gathering devices, there is communicative devices, that vibrate like your phone and then you have smart watches and Google glass.”

“Then when you look at each category, looking at each product they are just the first incarnations, but the second, third and fourth incarnations will hit really fast. I love the example of Google glass, because Google glass is not it at all, I like to joke that Google glass is like a Segway, it looks really cool, but who has one? So Google glass to me is like Scully. When you look at Scully, it is what I consider a final product, the design is pitch perfect, it's something that completely aligns with the time, it's ready for the mass market and its something that can be integrated into society and consumers are ready for it. But a lot of the wearables on the market are not. They needed to be tweaked or are just too one dimensional. And many fashion industry insiders just do not understand the technology behind certain products to make a well-rounded decision, so its the technical side that is really holding them back.”

The wearables summit "will be changing, because it's challenging conventions"

Therefore Bacelar aims to open up discussions surrounding the future of wearables by bringing together the brightest tech start-ups. “You are going to see players who are not obvious players, new players emerging the day of the summit, who could possibly be ejecting the conversation from it's established place, as well as start-ups which are way beyond what has been seen before. That's why the summit will be changing, because it's challenging conventions...We know that everything is constantly evolving and the big players, well they aren't big forever and they need new ideas. So I keep an eye on the start-ups, because they are the fuel, the food for the evolution of everything. I am very committed to them and constantly curating them, because that's what no one does.” 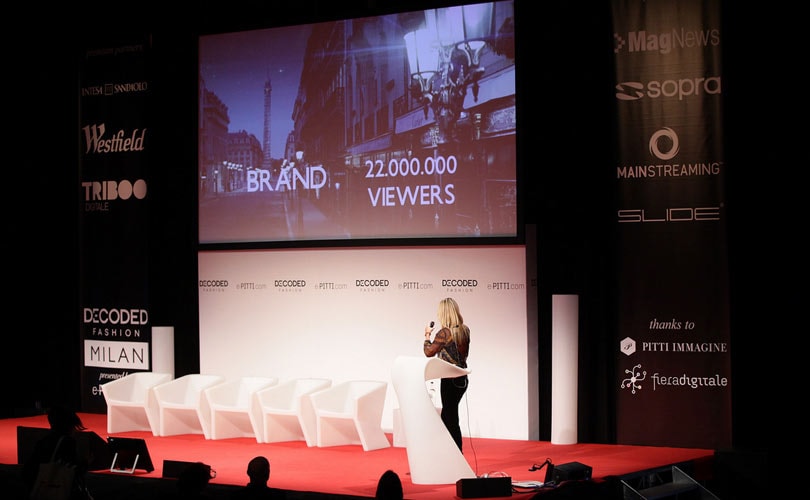 However, despite her efforts to bring together the best names in the fashion, beauty and retail industries together with her curated start-ups, when Bacelar revealed the focus of her upcoming summit, some balked at the idea. “Some fashion brands won't be attending the summit. Their response to wearable technology is: 'this is a fad, this isn't going anywhere. Not interested.' Some of them felt that it was too soon to talk about it, which made me wonder if it was right to talk about wearable technology so early. But then all I had to do was remember back in 2011, when everyone thought Decoded Fashion was a bad idea and the words they kept telling me was 'it's too soon'. We think it's exactly the right time.”

So if now is the right time to open the debate on wearable technology, how does Bacelar see the future of wearables developing? “It is depended on the evolution of the components, the batteries need to be washable and the materials need to be flexible. So far the contemporary and the accessories market has jumped in, but the only people who are not afraid, who are looking in from the outside, taking their time and making their plans are the luxury labels. And this is because some of the technology they need is not quite finished yet.”

Another issue which arises within the future of the wearable industry which Bacelar also aims to discuss at the summit is how to re-conciliate consumers fixed notions on fashion and technology? “How do we re-conciliate the idea of exciting technology being something you throw away and treasured fashion is something you keep? Look at the new iPhone launch, how many people stood in line for a new one. Technology is about throwing away the old and getting the new. And then look at the status of the vintage Chanel bag, how do you put the two together? That is one if the issues luxury industry is looking at now and what is holding them back now.”

“It is a risk we are taking," concludes Bacelar whilst reflecting on their choice of topic focus for the summit. "But we tend to be right most of the times with our risks, so I hope it's just another instance like that. Wearables is now. It is not the future, it is now.” 'Interconnected – a Global Summit on Wearable & Retail Innovation,' is set to run from November 18 to 19 at the Metropolitan West, New York.