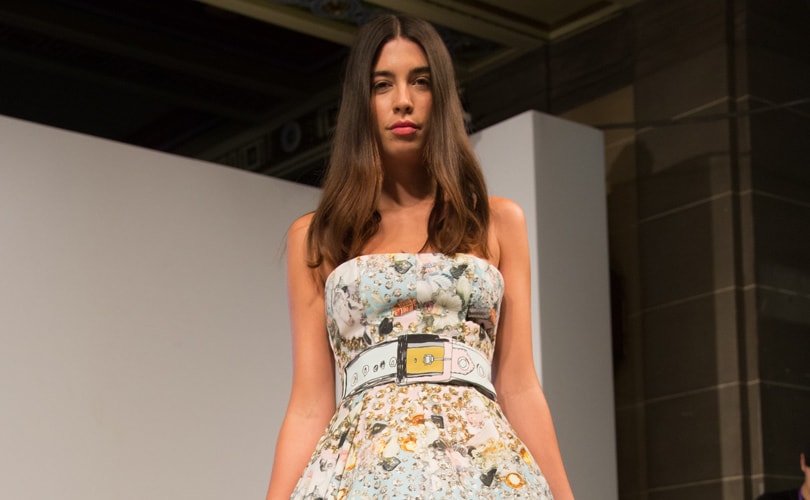 London Fashion Week always presents a stand out moment by an emerging designer, over the years it has been Molly Goddard, Alice Archer, and Paula Knorr and this season it had to be Norwegian designer Edda Gimnes, the winner of the Fashion Scout Merit Award. 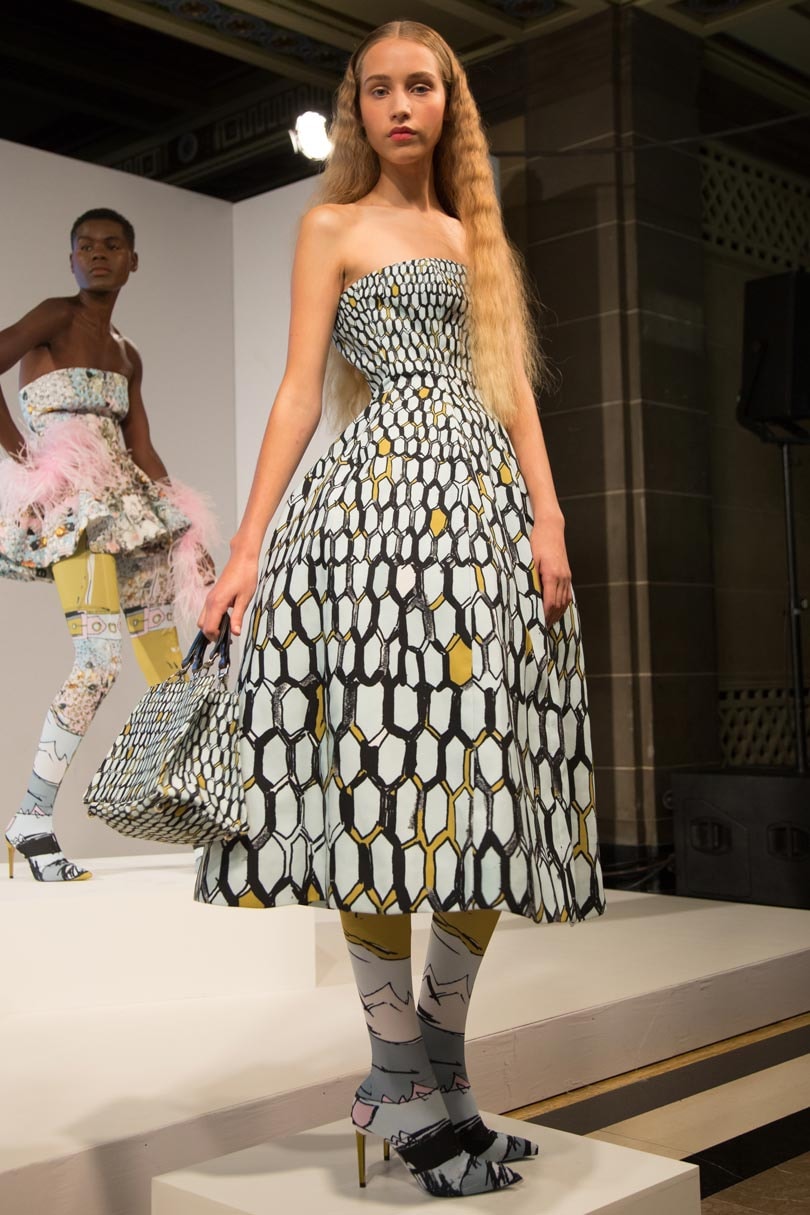 Fresh off showing her collections on the catwalk in Berlin and Oslo, the 25-year-old fashion designer, a graduate from the London College of Fashion, showcased her quirky larger-than-life aesthetic and illustrations with the Merit Award’s first-ever presentation in Fashion Scout’s impressive Freemasons’ Hall venue. 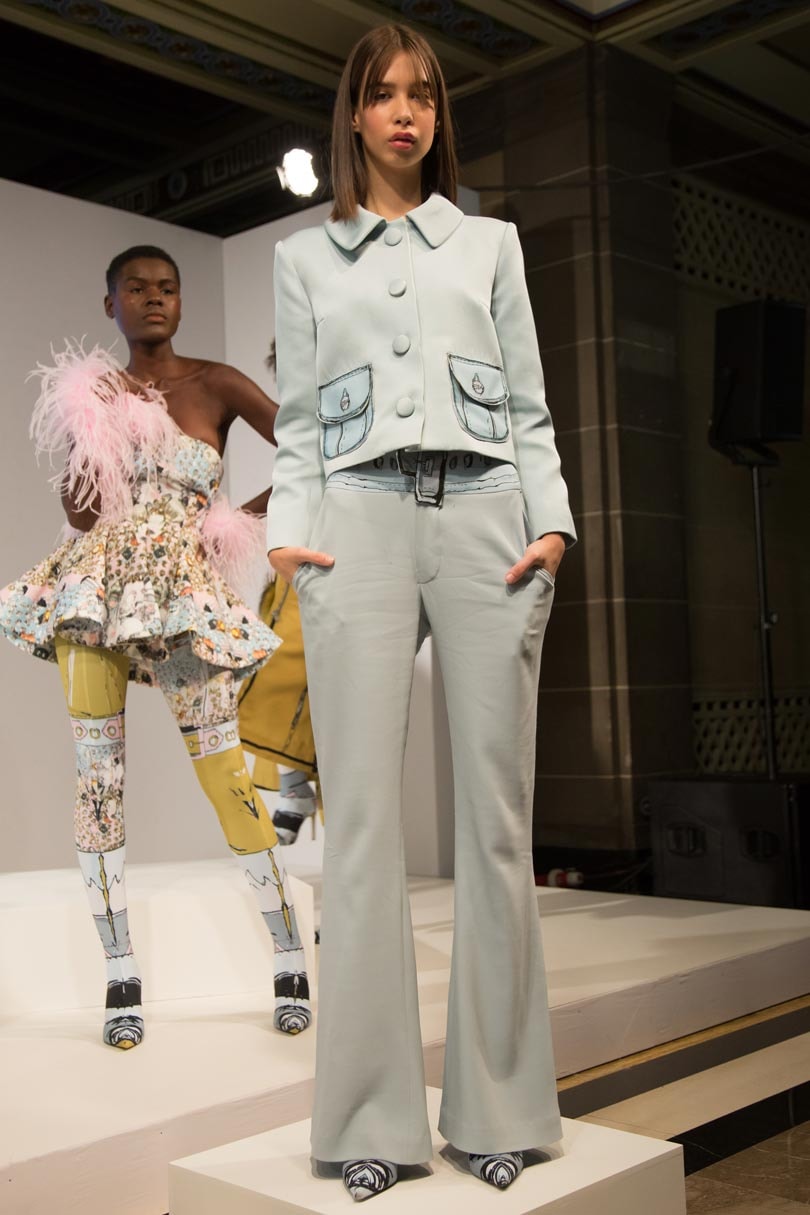 “I knew instantly I wanted a presentation,” explains Gimnes. “It gave me the chance to speak to buyers, show them the clothes, walk around with them, show them the fabrics, and allow them to interact with the collection, than to just see it down the runway.” 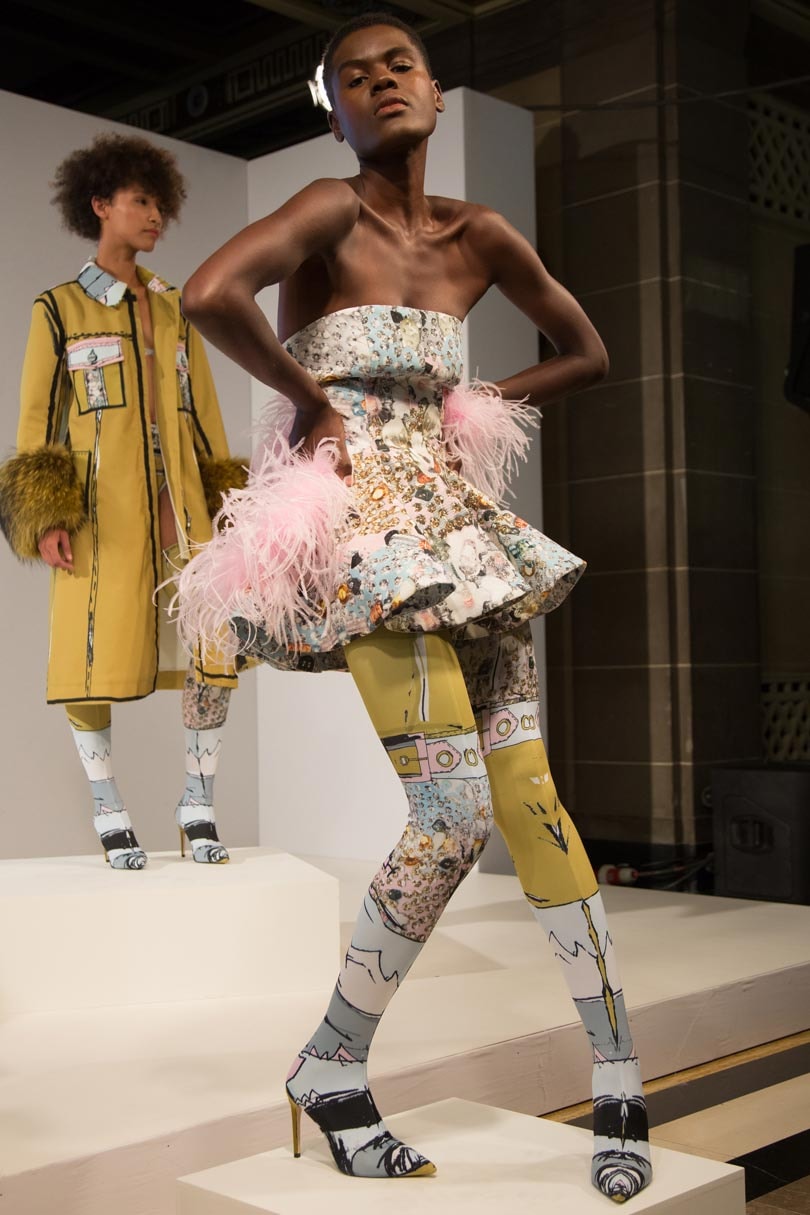 Along with her incredible talent, her spring/summer 2018 designs combine sports-luxe with 1950s glamour and a whole lot of fun with her child-like illustrations and digital prints, it’s her personality, she is very bubbly and passionate about her clothes that really shines through, a trait that some young designers forget about. As much as this industry is about talent, fashion also needs personality to sell and to draw attention, and Gimnes certainly does that, her happy attitude kind of resembles her illustrations and use of vivid colours. 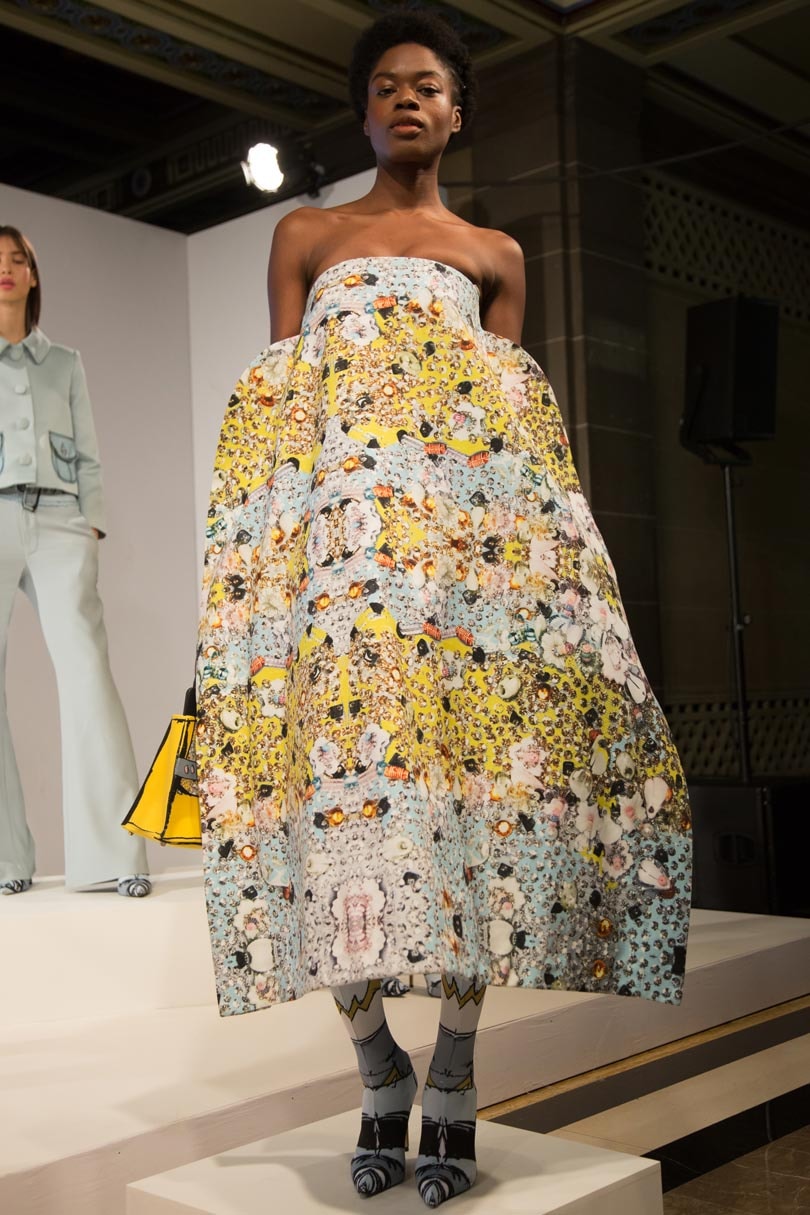 “You have to be out there, as at the end of the day there are so many people in the same boat as you, so you need to know where you want to go,” says Gimnes, in our interview following her London Fashion Week presentation. “At school I had absolutely no confidence at all, I was always the one behind, I was always so stressed.”

It was only when she met Manuel Vadillo, an experienced pattern cutter that Gimnes felt that she was on the right track. “He made it all happen for me, he gave me the confidence,” explains Gimnes. “It taught me that it is important that you know who you work with, it’s a team, without him it wouldn’t be possible. It was just so refreshing meeting someone that says ‘anything is possible’ and that there are no limitations and that’s why I work with him as he is incredible.” 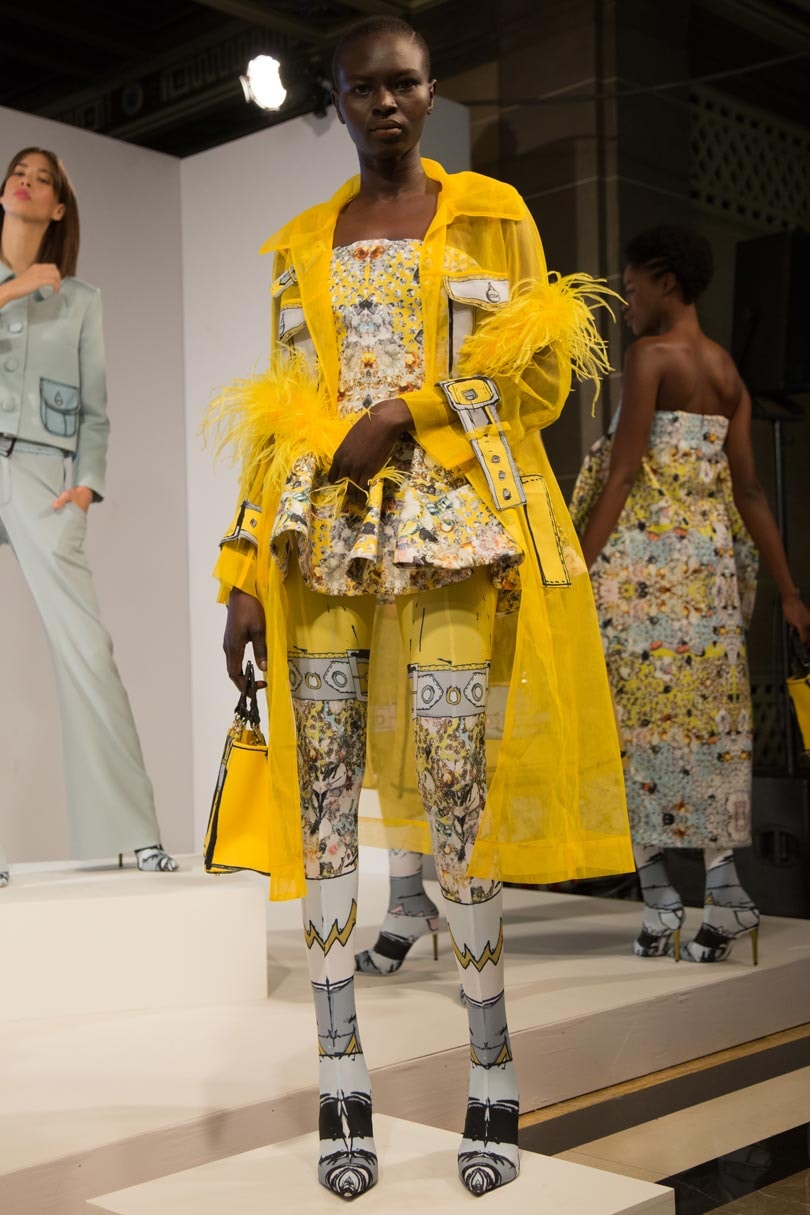 The Norwegian designer also notes that without Fashion Scout and the Merit Award that it probably wouldn’t have been possible for her to showcase in London. “As a young designer the amount of money and energy I’ve put into my collections to be seen by the right people in the industry is crazy,” Gimnes explains. “It is so important to have awards like this to give me the opportunity to showcase for them. Showcasing in general it is so expensive, if I hadn’t have had this for this season, I probably wouldn’t have been able to showcase in London.” 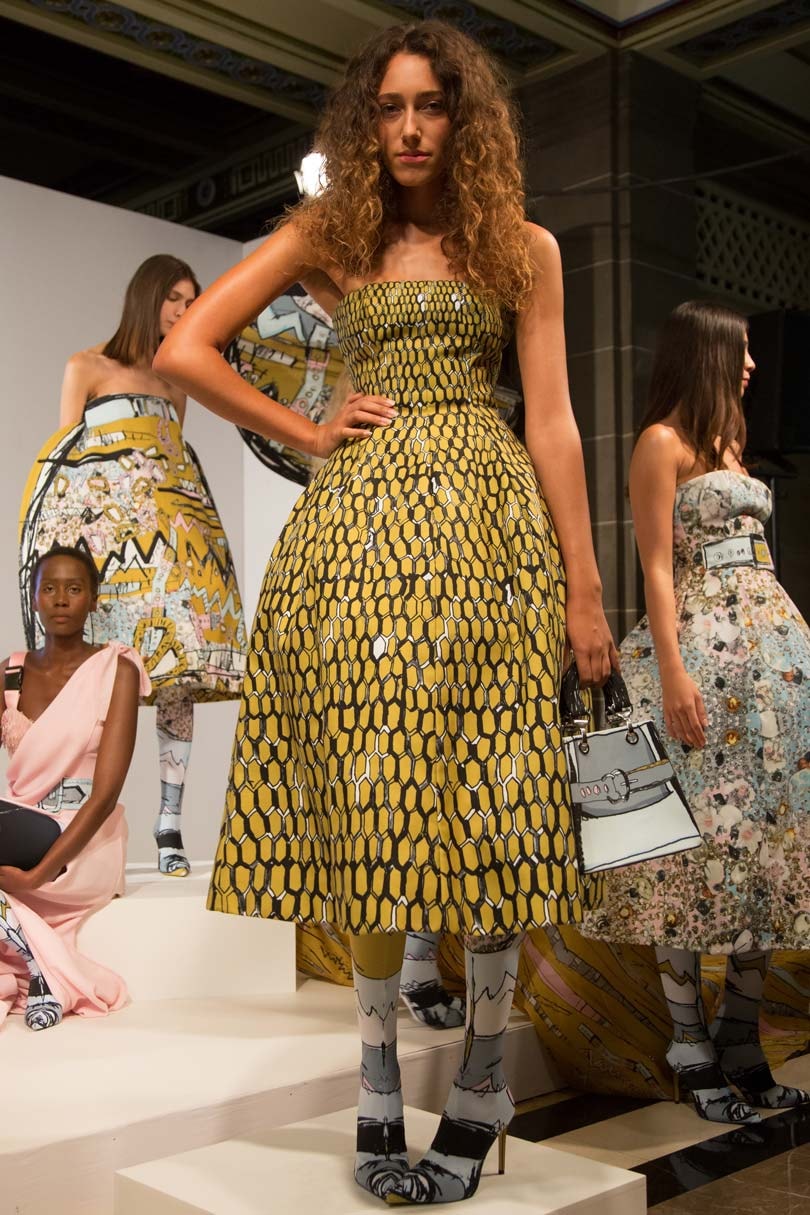 Gimnes also had some special assistance from Alber Elbaz, the former creative director of Lanvin, who she met after winning the 2016 Design for Tomorrow competition in Germany.

“When I met Alber in Paris earlier this year he talked about the importance of layering up and I took a lot of his advice,” says Gimnes. “One of my favourite pieces, the embroidered 1950s dress, with the belt, represents this. We worked from a tiny embroidery and placed it into photoshop and utilised a lot of technical aspects to finalise the print and used layering to give depth to the dress.” 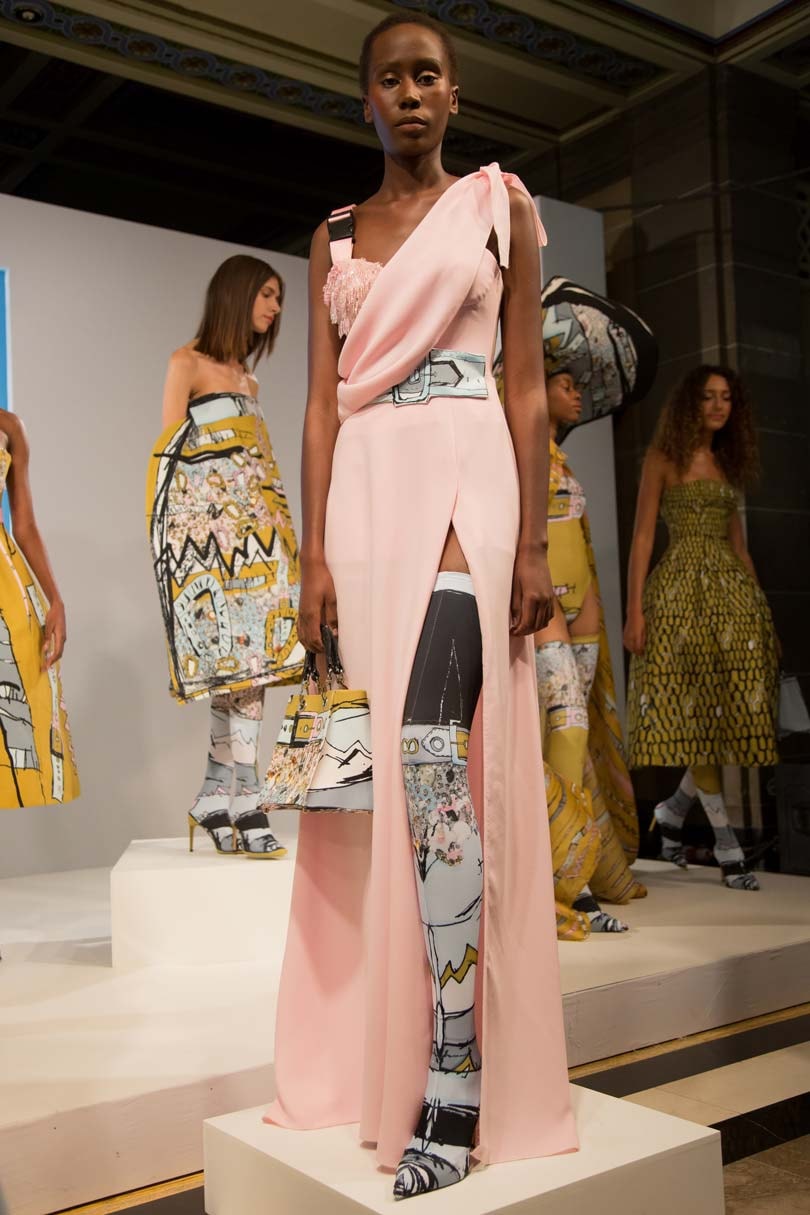 Gimnes adds: “The collection is called ‘Kuneska’ inspired by the first woman to compete in the Olympics and I also looked at the fashion icons of the 1950s, such as personalities like Greta Garbo and Edwina Mountbatten as they dressed so avant-garde for the time, they always dressed so beautifully and I kind of wanted to bring that back again.

“I loved how they embraced their femininity, while still being sporty and independent. For me, I feel that clothes help you feel like a different character, they give you a sense of feeling and belonging.” 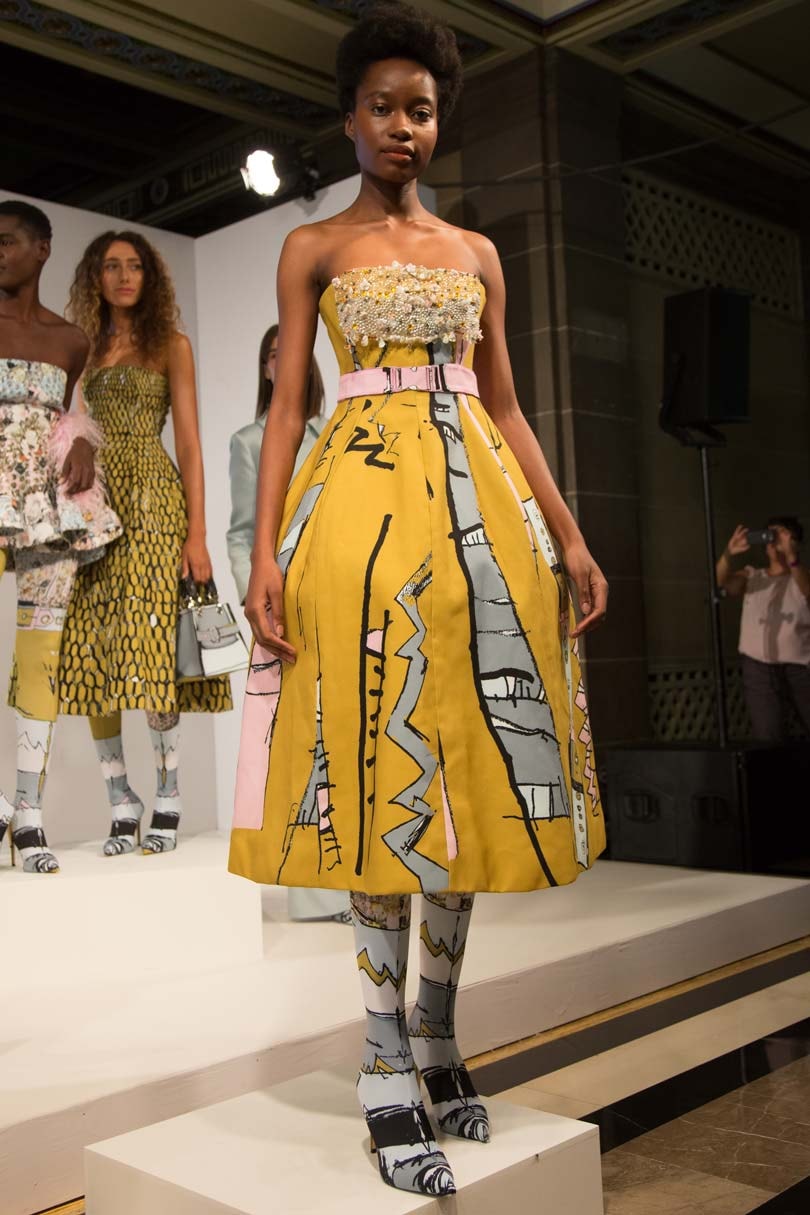 As well as the 50’s inspired silhouettes, this collection centres around Gimnes illustrations, which the young designer states is the “core identity” of her brand, with the prints on her whole collection, bar one suit and hat were all drawn by hand, “it’s a lot of work” adds Gimnes.

“I almost always draw with my non-dominant hand, I usually start when most people finish, and for me its that freeness to my drawings that isn’t perfect,” states Gimnes. “Nowadays everything is so perfect and I like that my drawings have a playfulness and imperfection about them and that’s very important to my brand.” 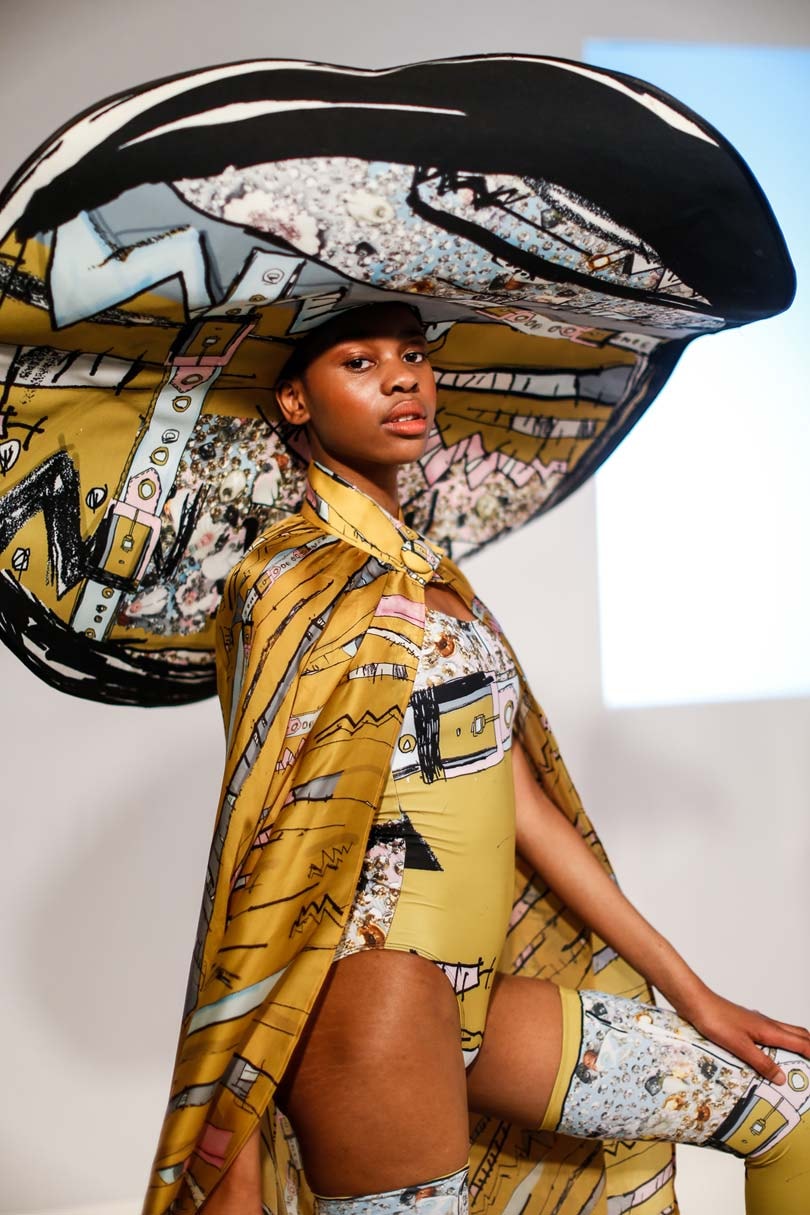 The collection is strong and cohesive, and despite the more grown-up aesthetic the Edda quirkiness and fun factor still remains. The 1950’s silhouettes makes a statement, such as fit-and-flare dresses, which have been given an Edda makeover with illustrations and surface decoration that really blurs the line of fashion and art, with the dresses teamed with utilitarian buckles, both physical and printed life like sketches.

Other key highlights include the oversized wide brim hats paired with a one-piece styled under a bellowing cape with thigh-high sock boots, while the sophistication and glamour was seen with the knee length trench coats, box jackets, strapless dresses and handbags seen in a colour palette of olive, mustard, grey, soft pink and blue, accented with decadent colour pops of canary yellow. 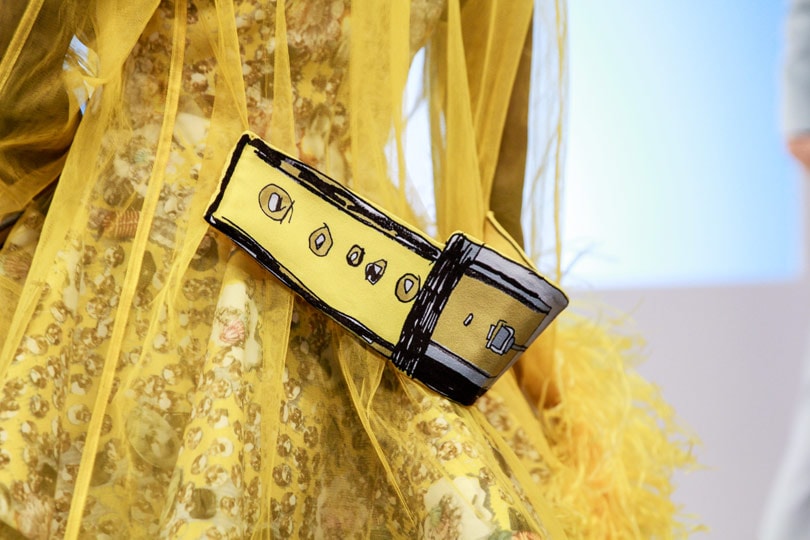 “I always want buyers and press to feel like they are being presented with a universe of Edda, from the clothing to the sock boots, oversized hats and handbags,” Gimnes states.

While Gimnes might be from Norway, the designer already feels that London is her home and will be basing her eponymous label in the UK, while still dividing time between her hometown of Olso. 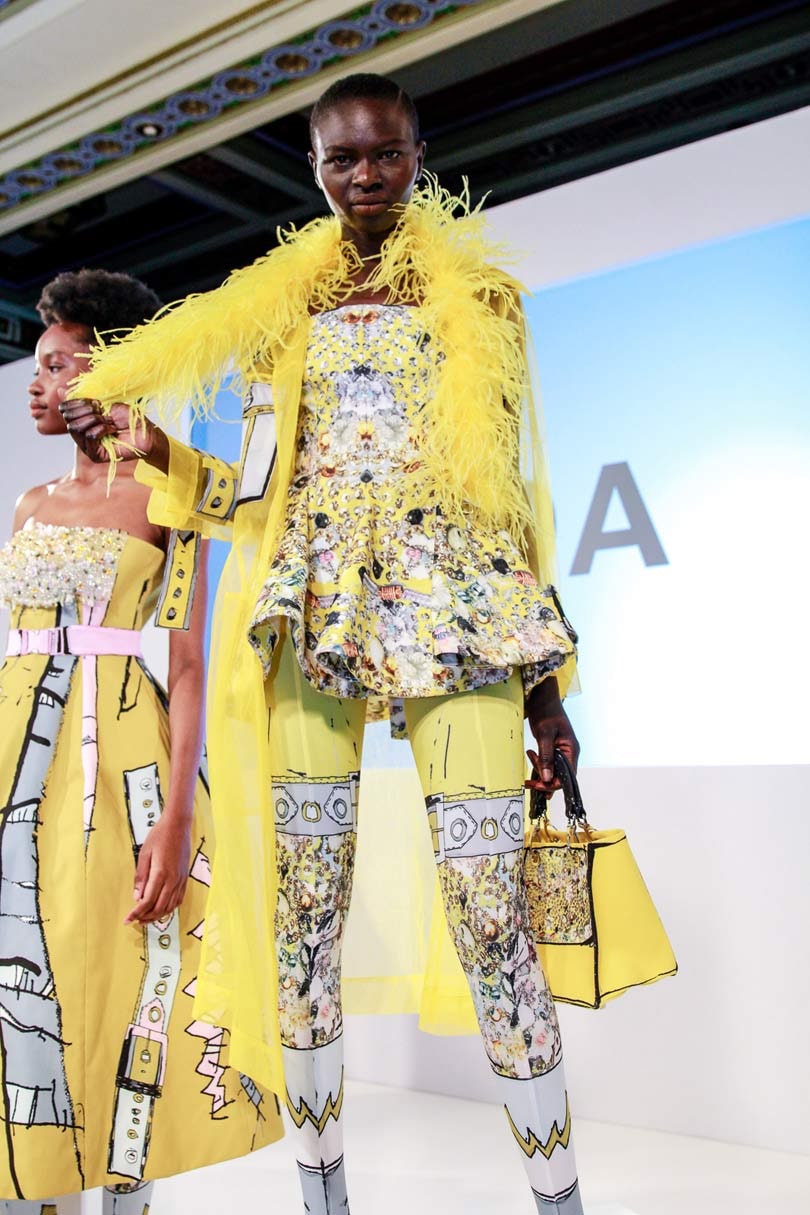 “What I like about London is that it is such a diverse city, I’ve always felt like I can be myself here, when I finished my high school years I was like I’m leaving. But it is wonderful to go back now, I appreciate Norway more now. But I do I feel that London is just a better base for me right now,” says Gimnes.

So, what can we expect from Edda in the future? “I always have goals each month. I think goals are important to move forward. You can’t just take a rest and be like ‘oh this happened’. There are so many people who want the same thing as you so you have to plan and separate yourself from them,” states Gimnes. “The key thing for me is that I now have production in place, I have meetings with buyers to get stockists, and I want to get into the Asian market, that’s important to me.” 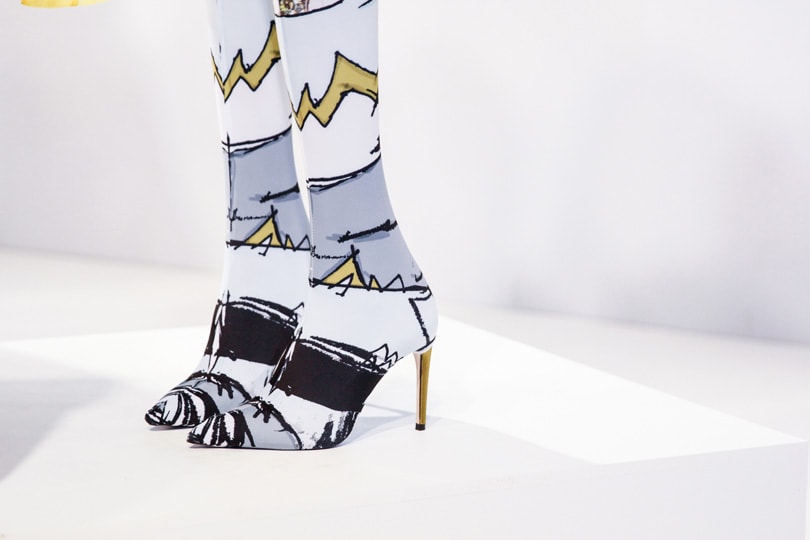 Gimnes adds: “The next couple of months are going to be really important in terms of sales, getting stockists and I also have a lot of exciting projects, including a really exciting collaboration coming up, that I really can’t speak about…yet.

“I’m excited, it’s all coming together!” 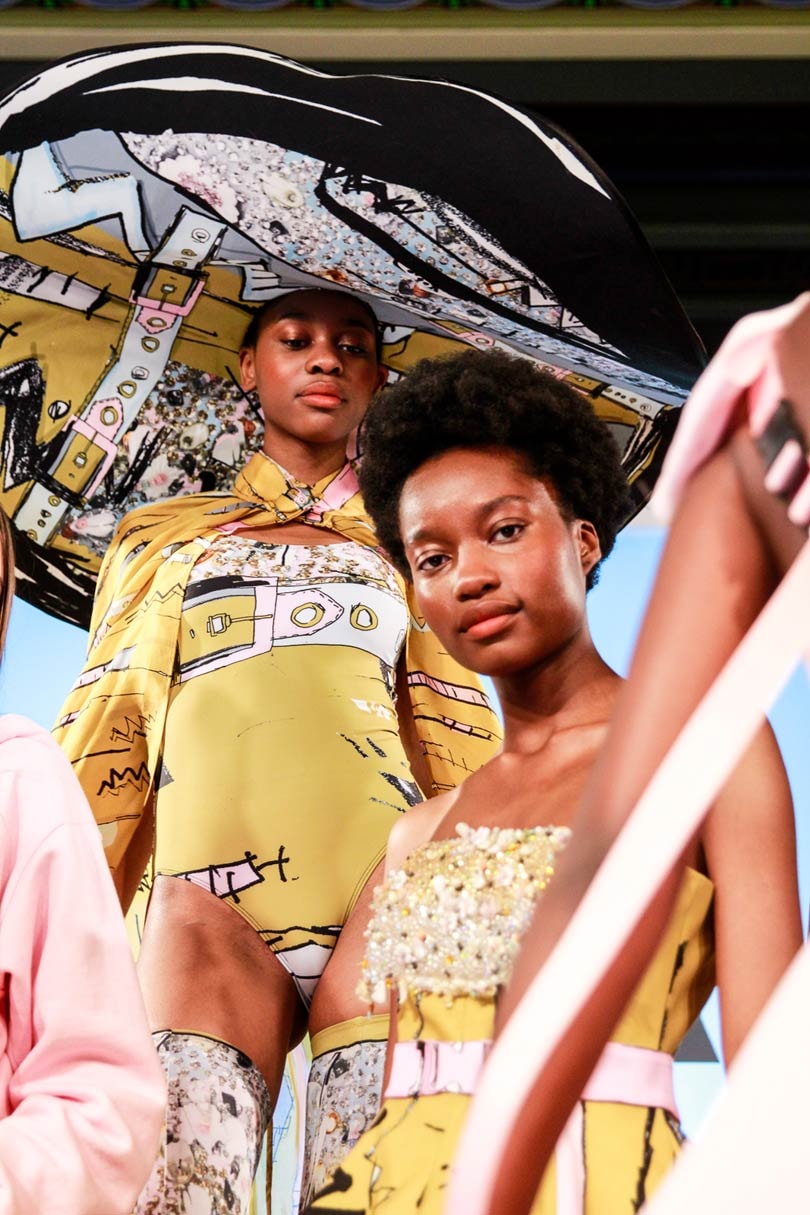 The international Fashion Week season for women's ready-to-wear kicks off in the month of September, with all eyes set on New York, Paris, London and Milan for next seasons latest trends. For all the women's wear catwalk season must reads, click here.
interview london fashion week lfw fashion scout edda gimmes