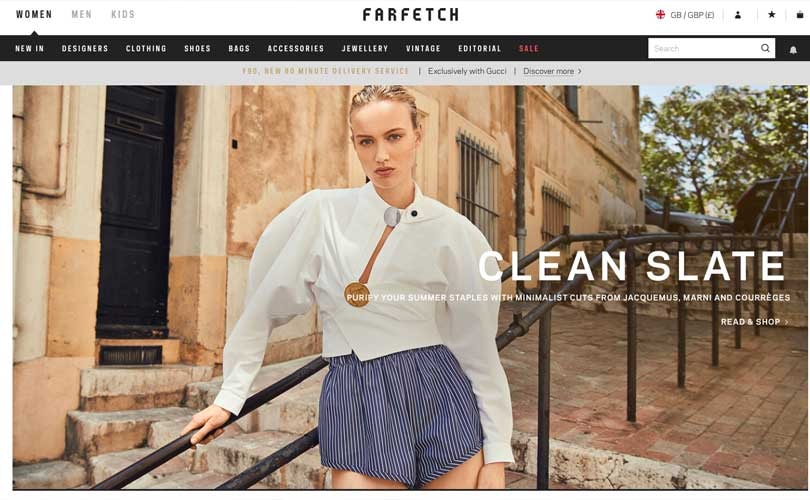 The Fashion Futures Awards, hosted by Decoded Fashion in partnership with the British Fashion Council, announced the 2017 winners last night in London including awarding Farfetch with the highest honour, The Visionary accolade, as well as awards for Tommy Hilfiger x Slyce, Gap, and MishiPay.

The awards, now in their third year, celebrates how the fashion and retail industries are evolving through tech-based ideas, solutions and tools, and presented six awards in recognition of the achievements of the “disruptors, visionaries, and innovators pushing the boundaries of what’s possible in fashion and retail”.

Farfetch scooped the highest honour, The Visionary award, which was jointly chosen by the British Fashion Council and Decoded Fashion, in recognition for the brand “spearheading innovation, disrupting the norm”, and was awarded the accolade based on the strength of Farfetch’s unique contribution to innovation in the fashion industry, said organisers.

Farfetch, Tommy Hilfiger and Gap among the winners at the Fashion Futures Awards

Other winners included Pictofit + Sabinna Studio, who teamed up with the Fashion Innovation Agency to make a mixed reality shopping experience, to win the Beyond the Runway award, while the Digital Coalition award was presented to Tommy Hilfiger x Slyce for Tommyland Snap:Shop, which enabled guests to its catwalk show to take in-app photos of models on the runway to receive instant e-commerce links for the items on display.

The Game Changer award, which celebrates the start-up set to disrupt fashion in 2017, went to MishiPay Ltd for its app that aims to eliminate the pain of the queue by allowing consumers to complete their purchase completely independently by picking up an item, scanning the barcode with their phone, paying via their handset, and then simply walk out of the door with their items.

High street chain Gap was awarded the Master of Mobile honour for its fully shoppable DressingRoom augmented reality app, which allows shoppers to try on clothes remotely, showing them in context and adjusting to the consumer’s size, while the final award for best integration of digital, and technology into the in-store experience went to Yun Eyewear, a Korean cutting-edge eyewear shop in Berlin.

The 2017 awards were judged by a panel of judges from across both the fashion and tech industries, including the British Fashion Council’s chief executive Caroline Rush, Google’s industry head of fashion Maria McClay, Asos head of brand experience Eve Williams and Amy Cole, head of brand development for Instagram.