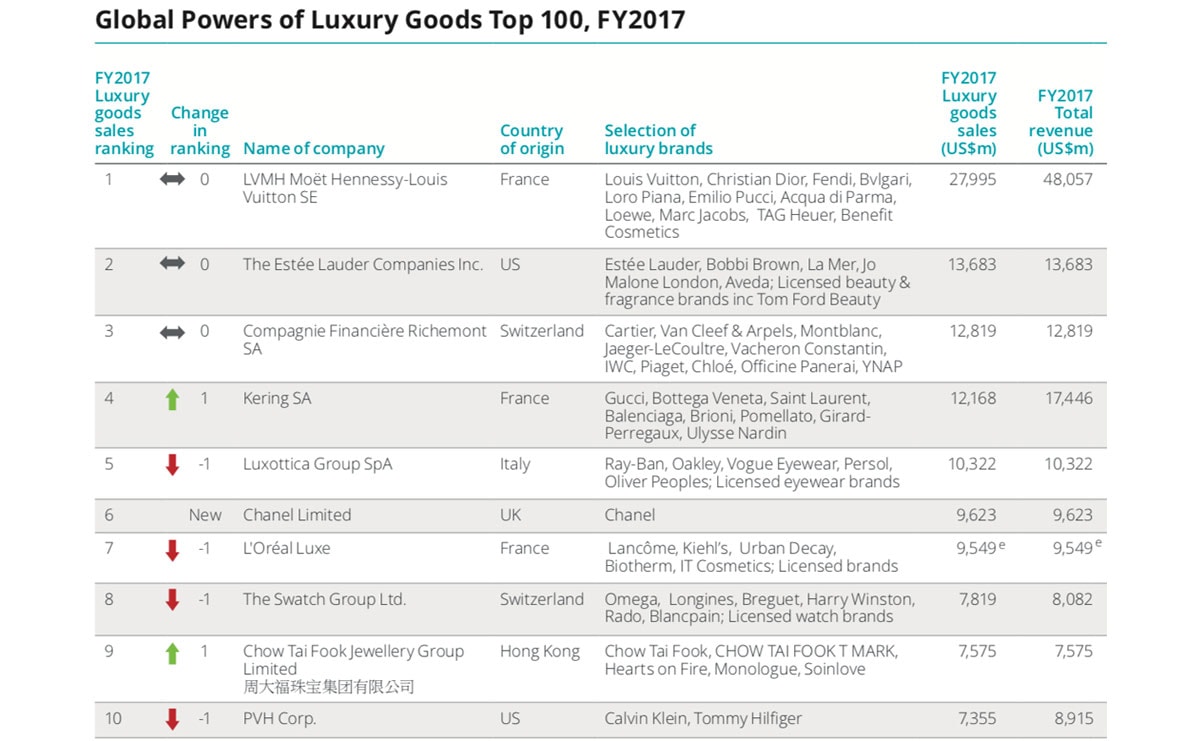 2017 was a good year for luxury brands. Figures for the 12 months ending 30 June 2018 saw the top 100 luxury goods companies achieve revenue of 247 billion dollars, seeing annual growth of 10.8 percent, of which nearly half is derived from the top 10 companies.

A report published by Deloitte this week "Global Powers of Luxury Goods 2019" shows the minimum turnover for a luxury company to make the top 100 list is 218 million dollars, but this is far below the top ten performers, who average at 7.59 billion dollars.

LVMH is the luxury leader

LVMH remains the undisputed luxury leader as it saw grow of 17.2 percent over the previous year. Fashion and leather goods account for 62.3 percent of LVMH's personal luxury goods sales, while perfume and cosmetics account for 22.4 percent.

According to the report, Kering achieved the strongest Top 10 luxury sales growth, of 27.5 percent, overtaking Luxottica to rank as the fourth-largest luxury goods company in FY2017.

Among the Top 10 luxury goods companies, three are headquartered in France, two in the United States and Switzerland, and one each in Italy, the United Kingdom, and Hong Kong SAR. In terms of product sectors, jewelry and watches, and multiple luxury goods categories sectors dominated with three companies each, followed by two in cosmetics and fragrances, and one company each in the bags and accessories, and clothing and footwear sectors.

Italian luxury brand Dolce & Gabbana fell three points in the top 100 to position 39 after revenue dropped 8.7 percent. These figures do not yet take into account the public relations fiasco the company faced at the end of 2018, which will undoubtedly impact its sales figures in the next annual luxury outlook.