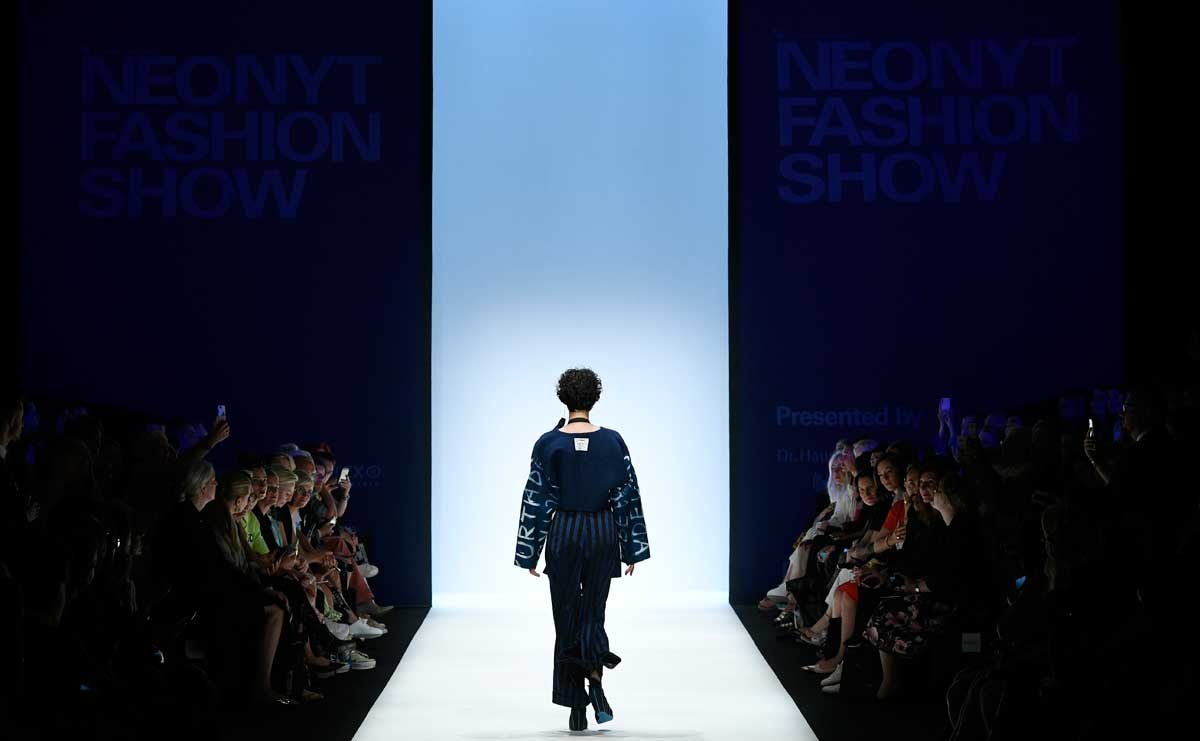 What is Berlin's standing in the fashion world?

In an industry where a T-shirt can cost as little as five or as much as 500 euros, perception plays a role that should not be underestimated. The image of Berlin Fashion Week and the role of the German capital in the fashion world seem to have especially suffered over the past years. But is Berlin really declining in relevance as an international fashion destination?

After an apparent drop in visitor numbers in July, the five Berlin fairs including Panorama and Premium are working hard to appeal to visitors during Berlin Fashion Week from January 13 to 17. The streetwear fair Seek will have panel talks for the first time as its owner Premium Group is bringing the FashionTech conference closer to its other events. Panorama is moving to a new location at the discarded Tempelhof airport for its January edition with menswear show Selvedge run; the once mainstream-oriented fair is also simultaneously rebranding. Neonyt, a separate fair dedicated to green fashion, has also decided to move to a bigger location at Flughafen Tempelhof because the number of exhibitors are growing.

Whereas the five German fairs were once at separate locations, meaning visitors would have to move from Panorama in the West to Premium in the East of Berlin, the recent moves to the same location will significantly reduce travel. The new location Flughafen Tempelhof is in fact an old one, which still evokes a tone of nostalgia; the almost legendary fashion fair Bread and Butter was held there at a time when physical fashion retail was booming.

Since then much has changed. Last summer, the image of Berlin Fashion Week seemed to have reached a new low - fewer notable designers and brands showed their collections on the catwalks, one blog even declared the “death” of Berlin Fashion Week. Even from a commercial aspect, the fairs suffered, counting noticeably fewer visitors. The trade fair operators no longer provide figures, but the city of Berlin estimates that around 70,000 people visit Berlin Fashion Week each season.

While the figures are not statistically comparable on a one-to-one basis, if you look at other European trade fairs, the German capital may not be in such bad shape. The men's fashion fair Pitti Uomo in Florence recently counted 30,000 visitors, and Who's Next in Paris, which claims to be the leading international trade fair for womenswear, counted 50,000.

The past rise of the Berlin fashion fairs

From a historical perspective, Berlin's fashion reputation is painted in a different light. The current chapter of the city's fashion history began in 2003 upon the arrival of fashion trade fairs Bread & Butter and Premium. Around 270 brands exhibited in Berlin 17 years ago, and by July 2019 there were almost 1800 exhibitors - that is if you add up all fashion fairs including Panorama, Premium Group and Neonyt.

Picture: Premium | Move the bar in the middle to see how the exhibition areas have changed.

"There is no other location in Europe where you can find such a diverse range of fashion, contacts and matchmaking potential twice a year as in Berlin. The industry wants a strong platform, dialogue and physical encounters,” said Jörg Wichmann, managing director of Panorama, during an interview in Berlin last July. His trade fair started in January 2013 with 359 brands, six years later around 600 brands were exhibiting.

However, the upheavals in the global fashion industry are also affecting trade fairs as proven in Berlin last season. After Panorama reported a record number of visitors during its January 2019 edition with an increase of 20 percent, the two major Berlin trade fairs, Panorama and Premium, became quieter in July. In the days of Bread & Butter, which went bankrupt in 2015, there was also mention of more than 100,000 visitors in Berlin.

Victims of their own success

"Today we are living in a state of complete structural change. When Bread & Butter was launched in Berlin in 2003, there was no Facebook, no Instagram, and no e-commerce," said Wichmann. The rise of online shopping and the expansion of vertical clothing companies have made life difficult for established fashion companies and physical retailers. Struggling companies are sending fewer employees to trade fairs or staying away altogether. Trends can be followed online on channels such as Instagram, and their cycles are accelerating due to social media. Which begs the question: does it still make sense to go to trade fairs twice a year?

The rise of the once leading trade fair Bread & Butter - a fair which was closely linked to the arrival and subsequent growth of the streetwear trend - and constant efforts by the Premium Group have established Berlin’s standing in the commercial fashion world over the years. Today, Berlin's trade fairs still have international relevance, even if this has been declining in recent years. More than half of the visitors to the sustainable fashion fair Neonyt in January 2019 came from abroad, and the proportion was slightly higher at 60 percent for the Premium Group. At Panorama, a quarter of the visitors came from non-German-speaking countries.

Due to their growth over the years, Berlin's fairs must now be careful not to fall victim to their own success. Many fashion fairs start out small - almost guerrilla-style - and become more popular as visitor and brand numbers increase, Katharine Smith, commissioning editor at trend forecasting company WGSN, said by email.

However, trade fairs often lose their appeal simply because attendees begin looking for something new and fresh."This homogenous feeling at the fairs, coupled with reduced budgets across the industry, means that those who travel are likely to choose one location and possibly try a new place every season to combine research trips in this way," Smith explained.

Berlin is searching for its identity as a fashion destination

Since 2007, Berlin has also been hosting a Fashion Week, which takes place in the same week as its fashion fairs. Despite initial ambitions, Berlin has not been able to establish itself internationally in the same league as Paris or London when it comes to designer fashion. Major German brands such as Hugo Boss or Escada have migrated to show collections in cities like Milan and New York. Even young and successful Berlin-based labels like Nobi Talai are showing in Paris where they’re more likely to meet new faces. "We have acquired the first customer from China and also from Russia there. When it comes to sales, Paris is important," designer Nobieh Talaei said after her Spring/Summer 2020 show in a Berlin church.

The German market is notoriously difficult - consumers shop conservatively, are very price-conscious and are not keen to experiment. Nevertheless, the German economy is Europe's largest, and Berlin Fashion Week remains a relevant event for brands expanding into the market. Many brands choose Berlin trade fairs for their launch in Europe or Germany as the country’s journalists, influencers and bloggers gather at shows and parties in the German capital during the week. Brands such as Marc Cain or Marc O'Polo may not show at the fairs, but they still use the week to invite clients and press to their fashion show or for breakfast.

Despite many complaints that the runway lineup in Berlin has become thinner, that doesn't mean there aren't any intriguing talents coming from Germany. You only have to look at the Berlin Showroom, which brings German fashion designers to Paris every season. But their common presence in the German capital is missing after the end of the Berliner Salon that used to display German fashion designers from 2015 onwards - the same year the German Fashion Council was founded. The lobby group represents German fashion design, promotes young talent and makes the case for federal support for the sector. Until now, fashion as a cultural asset has been promoted regionally in Germany but not federally. The city of Berlin is currently investing 450,000 euros annually in its fashion infrastructure.

Berlin is on the radar of trend watchers like WGSN because of its street style and the green trade fair Neonyt, said Smith. There are fashion-tech start-ups like Zyseme, tailoring shirts with the help of algorithms, or Lukso, which is working on a blockchain for the entire fashion industry. If there was one place currently where the entire German fashion industry meets, it would be at Berlin Fashion Week.

Berlin's diversity is both its greatest strength and weakness. It appears difficult to find a fashion identity for the dynamic city that would be valid today. Only when looking to the future of Berlin does everyone seem to agree: "Berlin stands very, very clearly for sustainability and technology. There is no fashion week or trade fair location that can match Berlin," said Thimo Schwenzfeier, head of the sustainable fashion fair Neonyt in Berlin.

The set-up of events such as shows and fairs is also changing, along with the entire fashion industry. "We believe that classic fashion weeks are a thing of the past," said Anita Tillmann, managing director of the Premium Group. It's not so much about looking at collections as it is about inspiration and networking. In order to bring fashion and tech together, she is also organizing the FashionTech Conference. "Large companies look for contacts and inspiration here in order to translate these into lucrative business models. Does all this fit into the old image of a fashion week? No. Berlin stands for permanent change and freedom," she said.